Symbols are the imaginative signposts of life – Margot Asquith 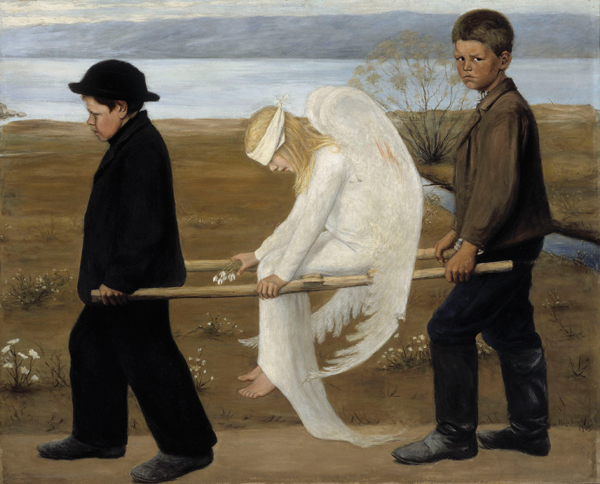 Generally, in life, I have found there’s more to most things than meets the eye and art is no exception. For centuries artists have incorporated symbolic references into their work, in order to give it greater meaning and emotional depth.

Symbolism, as a movement, was initially developed within French literature around the 1880’s, however, soon after it was also identified within art.

Symbolist painters believe that art should reflect an emotion or idea rather than represent the natural world in the objective, quasi-scientific manner embodied by Realism and Impressionism.

An artistic symbol is usually a solid, recognisable thing, such as an animal, a plant, or an object, that stands for something that would be hard to show in a painting or a sculpture; a force of nature, belief or emotion for example. But, it can also be a colour, for instance purple; purple is often used to represent royalty, imperial power, justice, and/or truth.

In Christian tradition, creation is thought of as a ladder, with its top rung occupied by angels; immaterial beings made of pure spirit, whereas man consisted of both matter and spirit, a body and a soul”; (Julien, 15).

Bees: Few creatures are more symbolic than the bee.

Again, in Christian tradition, the bee is the emblem of Christ, of his forgiveness (through analogy with the sweetness of his honey), with his justice (through its sting), and Christian virtues (because of the exemplary way worker bees behave towards their queen); (Julien, 35).

Birds: In most traditions, birds have a predominantly positive connotation. They represent the human desire to escape gravity, to reach the level of the angel.

Candles: The candle symbolises light in the darkness of life, especially individual life, illumination; it is the symbol of holy illumination – of the spirit of truth.

Dogs: The dog was the first domesticated animal, and is symbolically associated with loyalty and vigilance, often acting as guardian and/or protector.

Eyes: Eyes are probably the most important symbolic sensory organ. They can represent clairvoyance, omniscience, and/or a gateway into the soul. Other qualities that eyes are commonly associated with are: intelligence, light, vigilance, moral conscience, and truth.

Different colour eyes carry different meanings: blue – is a sign of being in love and innocence; green – jealousy; a sign of distrust and rarity; red – demonic, weeping, fury.

Horses: The horse is quite often a solar symbol, and in the Bible it is one of intelligence. According to its colour, a horse may symbolise either destruction (red) or victory (white). It is a maternal archetype, and it might also symbolise impulsiveness, impetuosity of desire and the instinctive impulses that motivate man..

Two contemporary South East based artists describe their artwork and how they employ symbolism within the narrative:

Ceridwen Jane Gray SGFA, Lamberhurst, Kent
​“I would describe my style as organic Expressionism; where the paintings evolve rather than are preconceived – The paintings are built up through many layers of different materials and glazes in order to express the depth and complexity that constitutes our journey through life. 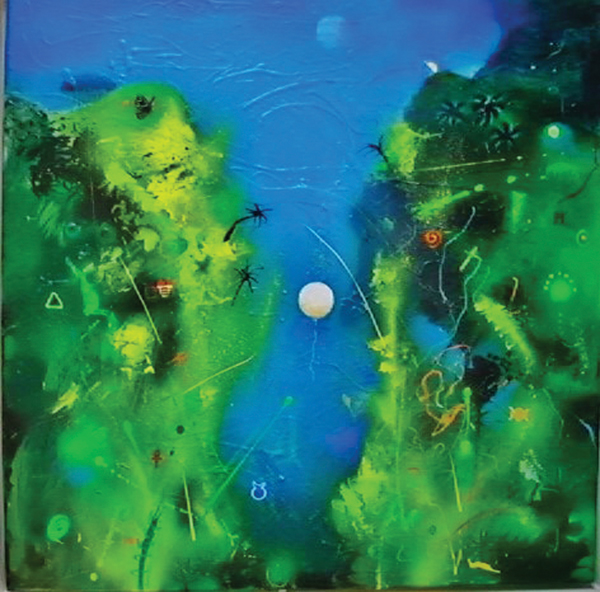 The moon saw the balloon and decided to remain hidden

I use runic and kabbalistic symbols in my work as well as symbolic colours.

In the painting ​‘The moon saw the balloon and decided to remain hidden’,

I have employed a number of ancient and magical symbols, depicting different energies.

For example, the symbol outlined in pale blue, floating below and slightly left of centre, represents god or the divine male principle and the yellow circle with two horns, located on the right side, represents the goddess – the divine female principal. These two symbols come together equally to form spirit – or chi/consciousness.

Dani Humberstone SWA, Wadhurst East Sussex
​“Fruit, specifically apples, is often used metaphorically in the visual arts, literature and language. Found in the illustration of fairy tales (Snow White & the poisoned apple), in Mythology (The Judgement of Paris),Eve in the Old Testament and of course poetry – from Shakespeare and Keats to Erica Jong. 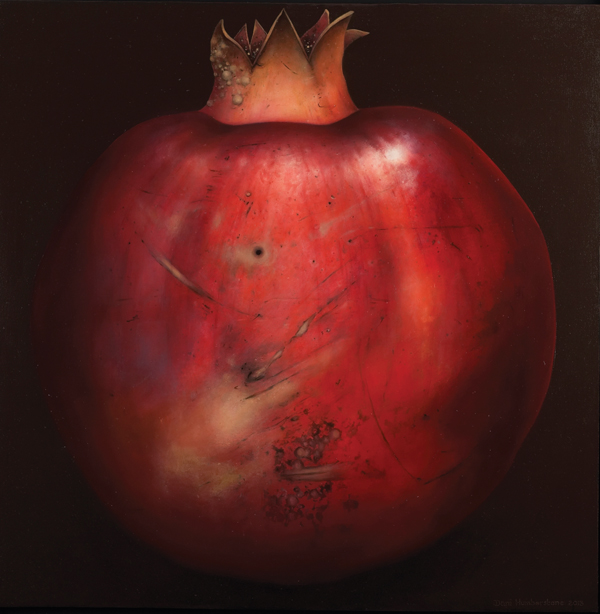 An apple in renaissance art – in the Christian tradition – symbolised a ​‘fallen woman’ obviously referencing Eve & THAT Apple. Pomegranates on the other hand are a symbol of the underworld – in the Greek myth, Persephone, is forcibly taken to the underworld by her new ​‘husband’ Hades where she is given a pomegranate as a symbol of their union.

The imagery of fruit continues to colour and describe how we live today:

For example, women are often termed as Apple or Pear shaped – whilst something is said to go ​‘pear shaped’, then there are ​‘bad apples’, The Big Apple & ​‘a plum job’, ​‘the cherry on the icing on the cake’ and not ​‘giving a fig!’

As an artist, painting fruit from life and marking it’s journey from fresh ripeness to decay, works on many levels. There is the obvious youthful beauty of fresh fruit, it’s shapes, colours and texture – then there is the skill of achieving a reasonable ​‘likeness’ of something we all recognise, but for me it is also important to try and demonstrate ​‘life’ within the subject – it is not enough to simply record an accurate representation.”
www​.dani​hum​ber​ston​eart​.com

Both Jane and Dani will be exhibiting in the September Art Exhibition, Wadhurst 4 – 13 September.
www​.sep​tem​ber​art​.org