Ceramics is one of the most ancient industries on the planet. Once humans discovered that clay could be dug up and formed into objects by first mixing with water and then firing, the industry was born. As early as 24,000 BC, animal and human figurines were made from clay and other materials then fired in kilns partially dug into the ground.

Almost 10,000 years later, as settled communities were established, tiles were manufactured in Mesopotamia and India. The first use of functional pottery vessels for storing water and food is thought to be around 9000 or 10,000 BC. Clay bricks were also made around the same time.

The word ​“ceramics” comes from the Greek keramikos (κεραμικος), meaning ​“pottery”, which in turn comes from keramos (κεραμος) meaning ​“potter’s clay”. Most traditional ceramic products were made from clay (or clay mixed with other materials), shaped and subjected to heat. In modern ceramic engineering usage, ceramics is the art and science of making objects from inorganic, non-metallic materials by the action of heat.

Early pots were made by what is known as the ​“coiling” method, which worked the clay into a long string that wound to form a shape that later made smooth walls. The potter’s wheel is thought by modern scholars to have been invented in Mesopotamia around the 4th millennium BC, however south-eastern Europe and China have also been claimed as possible places of origin.

• Earthenware is pottery that has not been fired to vitrification and is thus permeable by water.

• Stoneware is vitreous or semi-vitreous ceramic made primarily from stoneware clay or non-refractory fire clay. Stoneware is fired at high temperatures. Vitrified or not, it is nonporous.

• Porcelain is a ceramic material made by heating materials, generally kaolin, in a kiln to temperatures between 1,200 and 1,400 °C (2,200 and 2,600 °F). The toughness, strength and translucence of porcelain, relative to other types of pottery arises mainly from vitrification and the formation of the mineral mullite within the body at these high temperatures.

• Bone china is a type of soft paste china that is composed of bone ash, Feld spathic material and kaolin. It has been defined as ware with a translucent body containing a minimum of 30% of phosphate derived from animal bone and calculated calcium phosphate.

Ceramic art and Studio Pottery
There is a long history of ceramic art in almost all developed cultures and ceramic objects are often the only artistic evidence left from vanished cultures. Different degrees of emphasis have been placed at different times on the various elements of ceramic art including, the shape of the object, its decoration by painting, carving and other methods, and glazing.

Studio Pottery is made by artists working alone or in small groups, producing unique items or short runs, typically with all stages of manufacture carried out by one person. It is represented by potters all over the world but has strong roots in Britain, with potters such as Bernard Leach, William Staite Murray, Dora Billington, Lucie Rie and Hans Coper.

Ceramic art and studio pottery has seen a resurgence in popularity and renewed recognition in recent years, due in no small part to television programmes such as the Great Pottery Throw Down featuring Kate Malone and Keith Brymer Jones and high profile contemporary ceramic artists such as Edmund de Waal OBE and Grayson Perry CBE RA.

Featured Artist – Elia Pagliarino
Ceramic artist and painter Elia Pagliarino is, above all, a researcher as an ethnologist. Within her art practice she explores the facets of the human representation and the double play of the image.

Educated at ETPA, Toulouse, she has exhibited widely throughout France and recently exhibited a piece from her ​‘Beacons’ ceramic series witnessing a collective memory, with the Society of Women Artists (SWA) at their annual exhibition at the Mall Galleries, London. 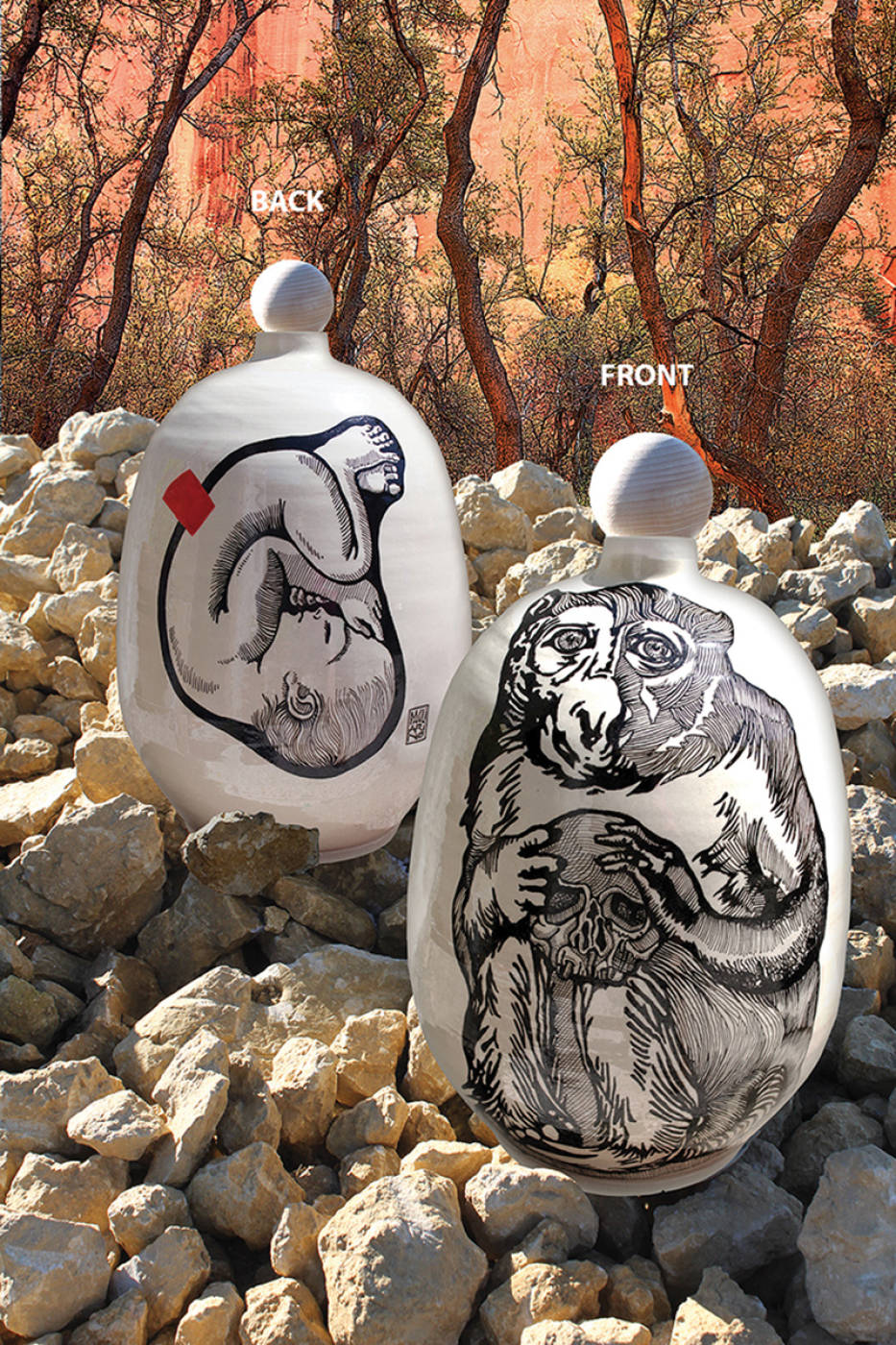 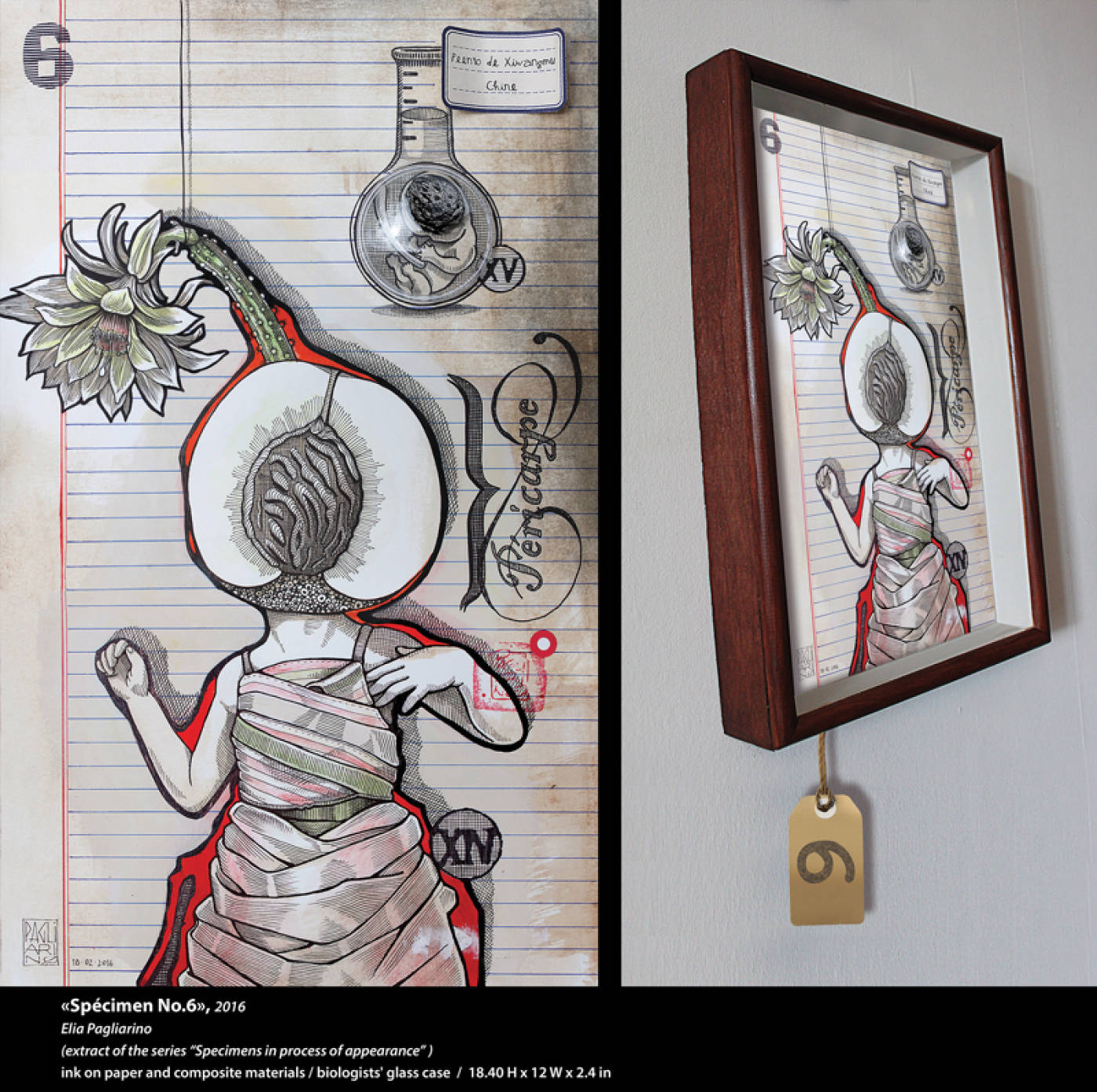 Her ​‘Beacons’ series of ceramic vessels list individual or collective stories inscribed in the past of our civilizations or in the course of extinction. These little stories testify to the Great History and tend an invisible thread between countries and civilizations. From Patagonia to Okinawa, from Manhattan to Pakistan, from Central Africa to Iceland, … the story continues by regularly hatching new tags. 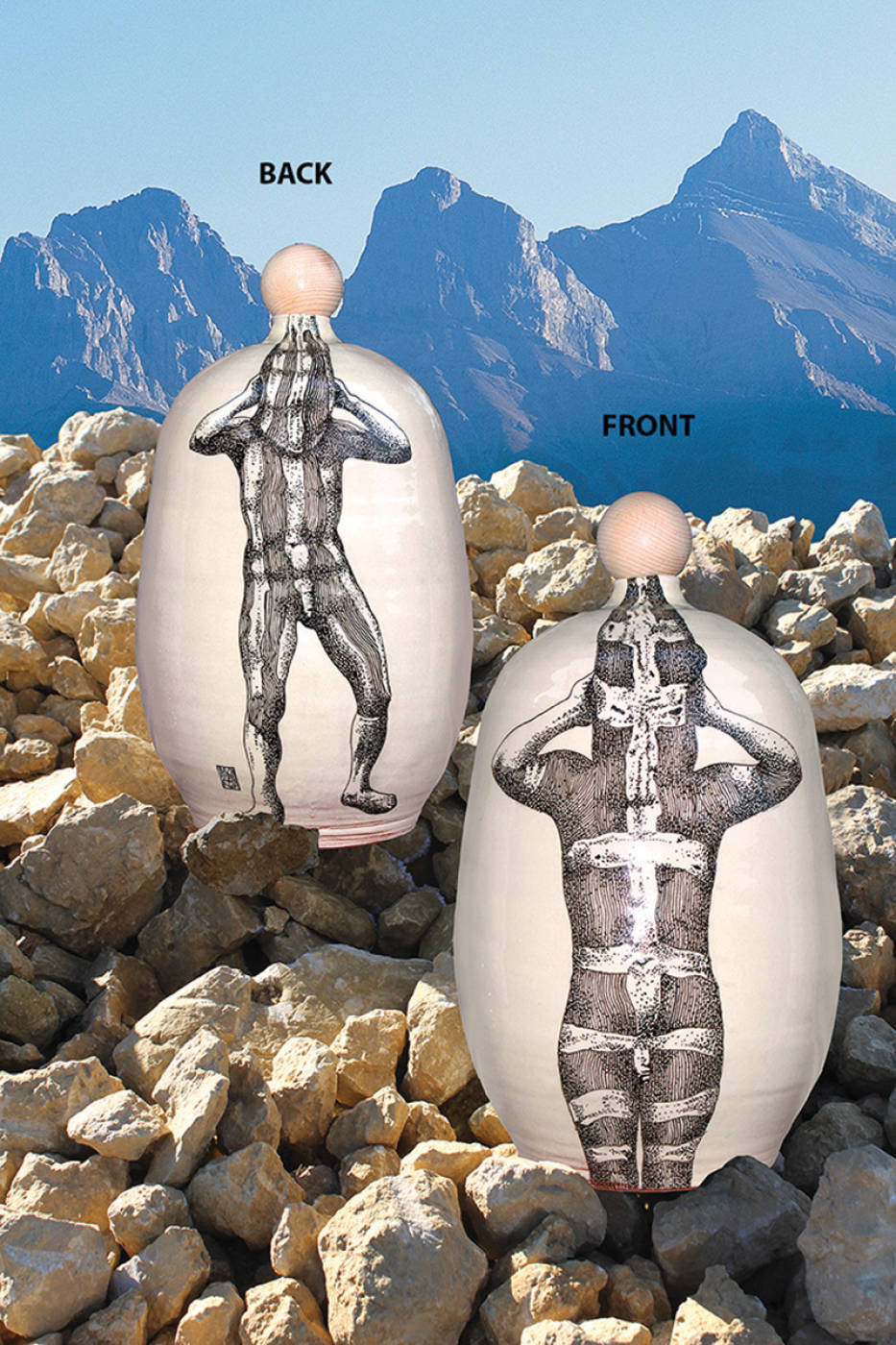 Speaking about her inspiration, Elia says ​“Initially I began my research into the series’ Specimens and Beacons in a very intuitive way. I then realised that they were closely linked: the Specimens series are presented in biologist glass cases, and draw upon a utopian hypothesis of a new species to come, as a revenge on those who have disappeared; while the ​“Beacons” ceramics store, little by little, stories which have come to an end.”

Speaking specifically about how her ceramics are created, Elia says ​“I work with a potter. I begin by making a model in plaster to elaborate the volume, the shape and the colour. A potter then makes the series and fires them for the first time. I then paint directly onto the pot, after which the potter fires for a second time. 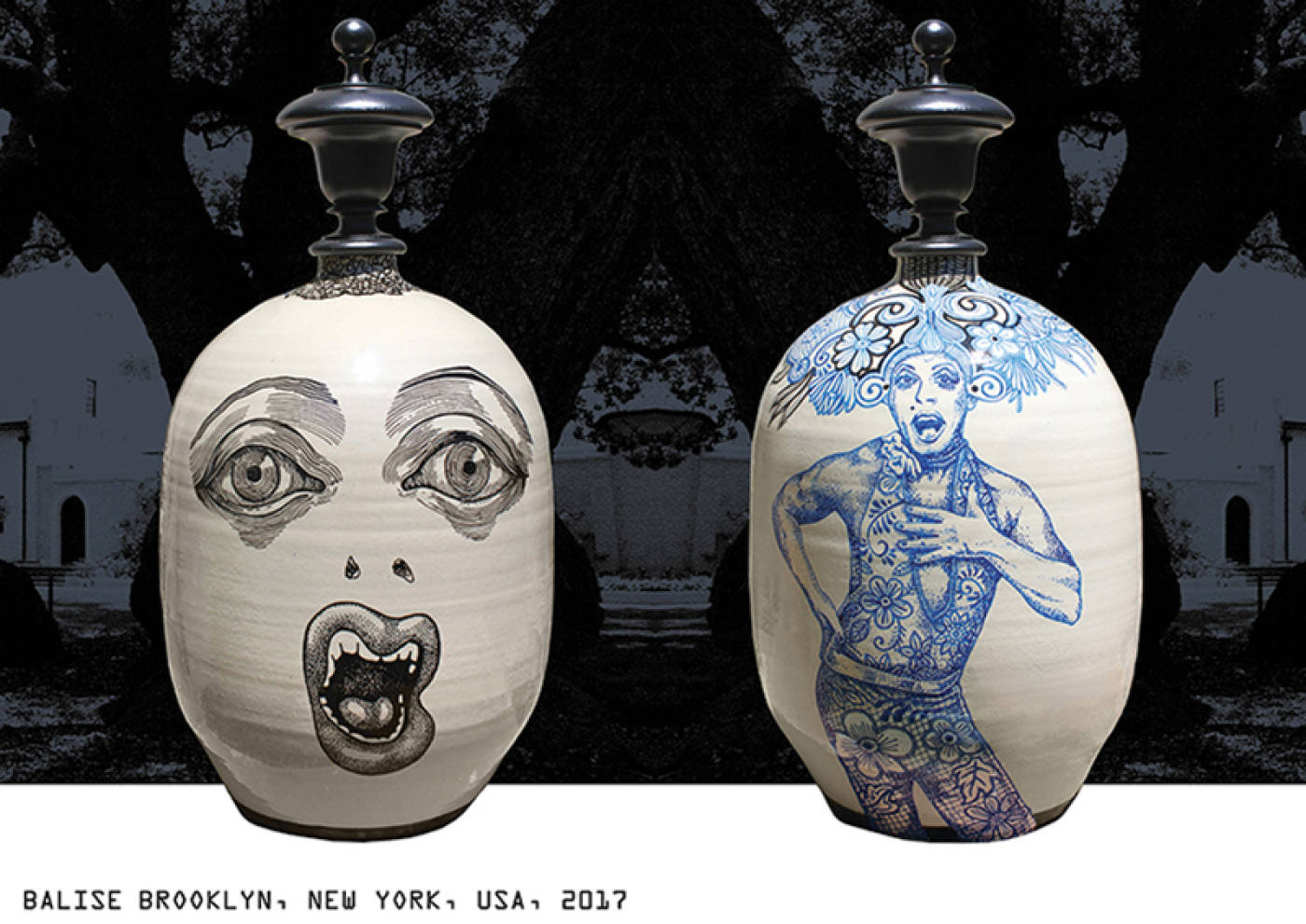 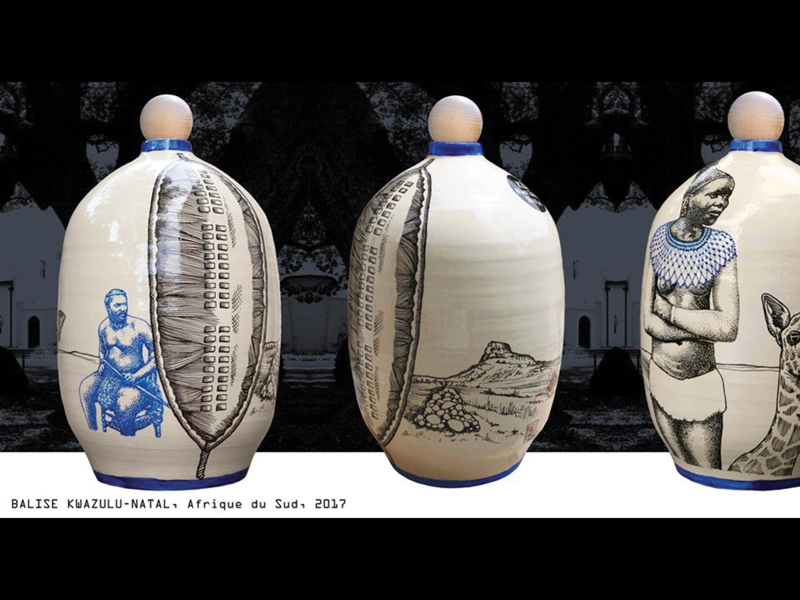 The choice of the terracotta is important for me. It is a natural material, perhaps the most used in all the civilizations, which carefully protect many precious things. And for archaeologists, the earthenware items they discover help them to understand the history of a culture. It is also a way for me to keep inside all these true stories and immortalize them in and on the ceramic.

I call these ceramics ​“Beacons” because they will be marked on a world map, each a light marking a place.”

A selection of vessels from Elia’s ​‘Beacons’ series will be exhibited at the forthcoming PURE Autumn Art Fair, 7 – 15 October 2017, at the PowderMills Hotel, Battle. 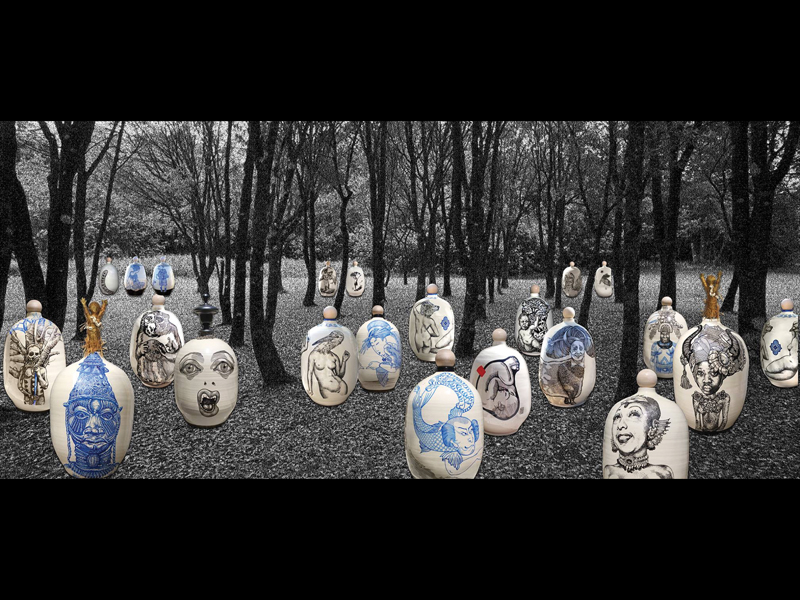 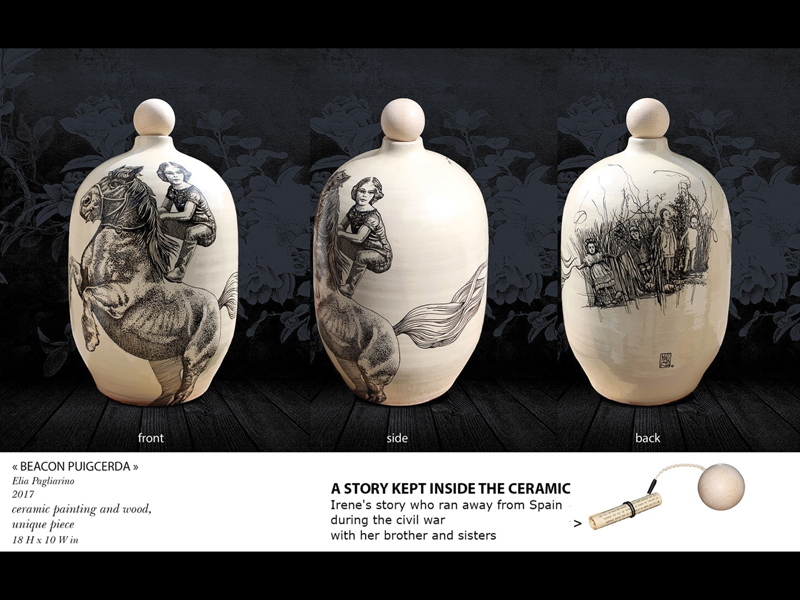 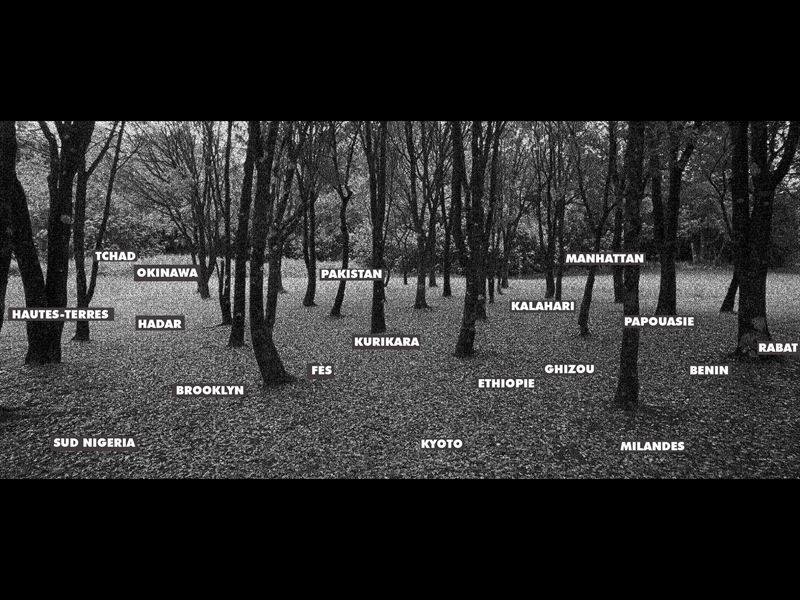