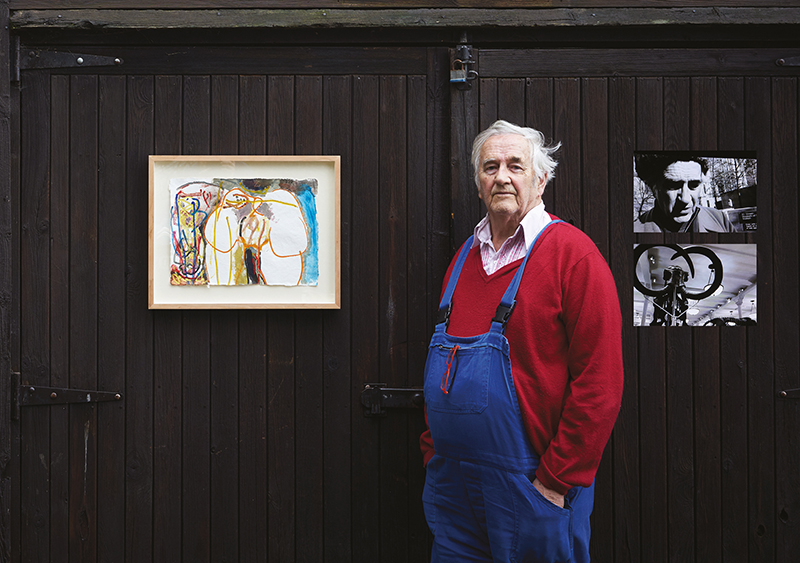 As a lifelong artist and educator, how satisfying would it be to see one of your student protégés not only continue to flourish in the Art world, but also to become his firm friend; for the roles to be reversed and in some respects for him to become the one in a supporting and guiding role? That is what happened to the legend that is Rod Harman. Having toiled for many decades to pass on his passion for Art and its power for self-reflection to countless students at Hastings College, he now finds himself revered and respected by a whole new generation of young artists; one of whom is about to host an exhibition of Harman’s new work at his own gallery in the heart of the East Sussex countryside.

The BlackShed Gallery is enjoying an ever increasing profile in the world of contemporary Art. In an idyllic setting on a working farm in the hop fields that surround Robertsbridge, it has become a beacon of high quality Art and shows that galleries outside of major cities and in the provinces, don’t need to be provincial.

Kenton Lowe, the erstwhile student of Harman’s, founded the gallery more than ten years ago. He has the raw passion for Art that his teacher instilled in him all those years before. They share the same resolve and unwillingness to compromise that makes them both authentic and tenacious workers. Since BlackShed opened, Kenton has hosted two exhibitions of Harman’s and the upcoming show will be the third and is a testament to the ongoing support the gallery gives to local artists throughout their careers. The axis around which Kenton and Rod’s relationship, and indeed the forthcoming exhibition, revolves is their shared loss of a dear friend, the renowned artist Jonathan Cole who tragically died in a road traffic accident in Phnom Penh, Cambodia in 2007 whilst making a documentary film. In many ways Harman’s work has been a eulogy to Cole ever since. He explains how he is constantly using his work to talk with him and it is clearly evident that their shared love for him has brought Kenton and Rod closer together.

Harman is an intensely sensitive painter. I felt this when he described to me the first time he saw a painting of ​‘Mont St Victoire’ by Paul Cézanne. He remembers in detail every step he took when he approached the painting and said of it …. ​“As I stood before it I sensed I was being weighed in the balance and found wanting”. Alongside the late work of Michelangelo – particularly The Rondanini Pietà, the sculpture he was working on the day he died – the paintings of Constable and Cézanne continue to have a searing effect on Harman’s life and Art. He cannot escape the gravitational pull they have on him. Imagery and ideas from the Pietà permeate all of his work. The reflective pain of the Virgin Mary as she contemplates the dead body of her son haunts all of Harman’s paintings. He relishes the interplay between the sacred and the profane, at times highlighting the contrast between them and at others convincing us of their equivalence. Harman is hugely prolific and paints in the way most people breathe. He has worked every day for the last fifty years, applying paint feverishly – scratching, smearing and often using paint straight from the tube or applying it with found objects. He paints to find out about himself, to understand his thoughts and the nature of existence, he says. His process recalls the well known E.M.Forster quote ……. ​“How do I know what I think until I hear what I have to say?” and so he ​‘speaks’ through his paintings in order to understand his existence, to experience the non-physical world of his unconscious and the sacred forces that play out there.

Harman’s paintings are full of disarming and beautifully drawn lines and smudges that are built up iteratively in a heartfelt frenzy. It is as if he is communing with an underworld that is not freely accessible to mortals. The true magic of his work becomes apparent as you start to disentangle the meld of scatological and religious iconography. In his work sexual genitalia are consecrated and religious imagery is made visceral and of the earth. The sincerity and genuineness of the work recalls that of folk or primitive art, but on closer inspection Harman’s use of colour and composition is highly sophisticated; his drawing sublime.

It is touching to witness the reciprocal relationship between the gallery and the artist it serves, particularly, as in the case with Rod Harman, when gallery owner is an ex-student. Speak to anyone involved in visual arts in and around Hastings and everyone will have a Rod Harman story. I spoke to Robert Sample who was a student of Rod’s and is himself a highly thought of painter who works out of St Leonards. He tells me that Harman was an inveterate nurturer and a huge presence in his life ……. ​“he stood alongside me, understood my struggle and the journey I was on and pushed me to be strident and confident”. He says ​“He not only encouraged us to take risks and to deeply reflect on our motivations, but he modelled a raw passion and conviction that was rare in other tutors”. Harman’s teaching methods were unusual, novel and hard to predict. Sample recalls a day when he covered a life model in rashers of bacon in order to emphasise that ​“you are painting meat!!!”.

The BlackShed has commissioned a short film that will be showing alongside the paintings in the exhibition. It is called ​‘A Day In New York’, filmed by Richard Heslop and edited by Sam Sharples. The film complements the paintings so well, as it gives us an insight into the intensity of Harman’s thinking as he aimlessly wanders around the New York subway, city streets and the Museum of Natural History. His fervent talking is a heady cocktail of playfulness and profundity that immediately helps bring a peculiar clarity to the work. Beautiful cinematography and editing together with a spontaneous narration from Harman really convey the spirit of this big man and his longing to experience the divine. It points directly at the poetry of his work.

‘Skin Deep’ an exhibition of recent work by Rod Harman and Richard Heslop’s new film ​‘A day In New York’ can be seen at The BlackShed Gallery from 6th April until 18th May 2019. For more information you can visit the website.