In the 21st century we have many forms of entertainment to occupy our leisure hours, including all kinds of programmes and diversions pouring into our very homes round the clock. In former times entertainment was much more limited; however, for one particular era, which we call the Late Georgian and Regency periods, the theatre was vastly popular with all classes of society.
After the Restoration of Charles II, theatres were strictly regulated by a system of control that necessitated a ​‘patent’ from the king before a theatre could be built. These theatres were designated as ​‘theatres royal’ and were gradually established in major towns. Other lesser towns also clamoured for the right to have a theatre, so in 1788 a new Licensing Law was passed giving local magistrates the authority to licence a theatre for a maximum of 60 days per year. This new regulation created a boom in theatre building and soon there was barely a town of any size without its own theatre. 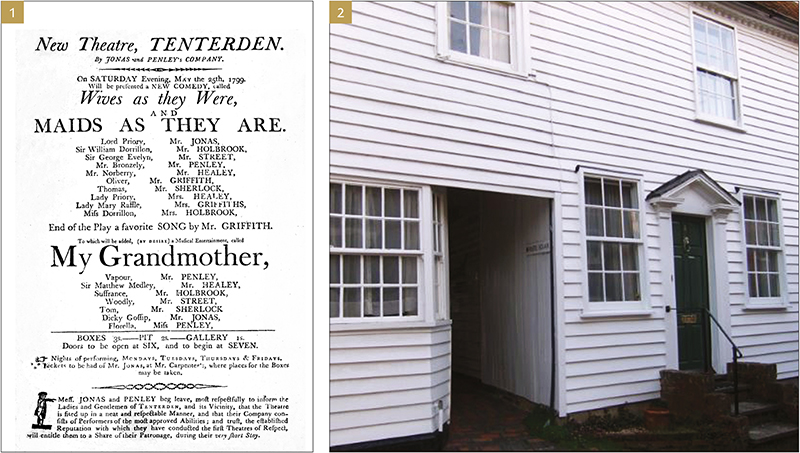 1 The earliest known Playbill of Tenterden Theatre. Dated 25 May 1799, the footnote at the bottom of the playbill may well indicate this was the first show presented after opening.

2 Front of 3 Bells Lane (Theatre Cottage). The front of the present Theatre Cottage converted from the former Georgian Theatre, with a tunnel passing through for access to Theatre Square.

In the south-east, circuits of theatres were created by different managements. Mrs Sarah Baker had Canterbury, Tunbridge Wells, Maidstone, Faversham, Hastings and Rochester; Charles Mate was firmly established at Margate, Deal and Dover; and Thomas Trotter held Gravesend, Hythe and Worthing. There was even a small circuit of sorts comprising Cranbrook, Sheerness and Lydd.

It seems remarkable today that places like Bexhill, Battle and Rye, which in those days were little more than villages, had thriving theatres. These three places ― one could hardly class them as towns in 1788 ― were on a circuit operated by a company headed by brothers-in-law Sampson Penley and John Jonas. Other towns on their circuit were Folkestone, Eastbourne, Henley, Lewes, Peckham and Tenterden. In 1815 they also acquired the theatre at Windsor and, after Sampson Penley retired bankrupt in 1822, that venue was managed successively by each of his sons and a daughter until 1841.

Of course, all these small theatres have long been swept away, but while researching for my book What’s the Play and Where’s the Stage, which tells the remarkable story of the Jonas & Penley company and their peregrinations in this country and overseas, I was able to discover something substantial about the theatre at Tenterden.

The theatre was built in 1799 and flourished until 1840. After the Napoleonic War there was a major slump throughout the country and, with the accession of Victoria, a great change in social habits. There was also a significant exodus from the countryside into large manufacturing towns, and emigration to Australia, Canada and America. For all these reasons the country theatres started to close around 1840 and most were converted to other uses including non-conformist chapels. I have images of over 100 playbills for the Tenterden venue, the earliest being 1799, the most recent 1835, representing almost the entire lifespan of the theatre. (See picture 1)
The building is clearly marked on the Tenterden tithe map of 1843 and even today one can still gain a strong sense of how a visit to the theatre would have been two hundred years ago, as the present town plan still names Theatre Square and Theatre Cottages as locations. A narrow passage down the side of the Nationwide Building Society on the High Street leads into Jackson’s Lane, which then becomes Bells Lane. This is a pleasant rural lane lined with some white weatherboard houses. A short way down on the left hand side there is actually a pedestrian tunnel through the middle of a house with a sign pointing to Theatre Square. (See picture 2) Emerging from this wooden tunnel one is faced with a row of white weatherboard cottages named Theatre Cottages.

It would be wonderful to think that these modest cottages had been converted from the old theatre but, alas, the evidence of the tithe map indicates the theatre itself was situated to the left as one emerges from the tunnel. (See picture 3) In a book of 1926 called Vincent Crummles His Theatre and His Times, the author F J Harvey Darton claims ​“the tall remains of a house were never built as a dwelling. They were very clearly built as part of a theatre. They have, inside, a lovely spiral oak staircase (solid-sided, not balustraded) with openings on each floor into hutches which can be no other than theatre boxes: one of the windows (the top one, now converted for habitation) looks out from such a box into what must have been the well of the playhouse.”

He includes a photograph of the rear of this dwelling taken in the 1920s. (See picture 4) If this theory is correct then what he means is that the present house was created from the former front-of-house access to the boxes and incorporating the remains of the central box on each level ― the rest of the theatre then demolished and a weatherboard wall tacked on to cover the rear of what remained.

Since the 1920s there have been some further modifications to the house. The upper floor, which housed the ​‘hutch that must have been a box’, seems to have been cut back and a lower roof put on making what is a large dormer window. The ground floor may have been advanced a little too. There is now even less to recognise as a former theatre. The present building is shown from much the same viewpoint in the current coloured picture. (See picture 5)

My research was greatly assisted by Debbie Greaves the curator of the Tenterden Museum which holds the tithe map, and has a collection of authentic playbills from the theatre. Debbie also discovered some fragments of wallpaper. These pieces were found in a large envelope in the archives of the Tenterden museum where they had reposed un-noticed for over 40 years. There are some eight fragments, the largest no more than 24” x 12”, most far smaller. The envelope was inscribed ​“Wallpaper thought to be circa 1775 fixed direct to daub plastering at No 3 Bells Lane walled up originally by alterations and found FEB 1971 on restoration of the property. R FRERE-SMITH”

The houses in Bells Lane were never more than humble cottages and were not likely to have had wallpaper on the walls at any period. Indeed, at the beginning of the 20th century Bells Lane was apparently regarded as a slum area. However, the area is now gentrified, and No 3 Bells Lane is the building generally recognised to have originally comprised part of the Georgian theatre. The present owners have named their house Theatre Cottage.

Debbie Greaves, under the strong conviction that these fragments were from the Georgian theatre, has had them analysed by Lincoln University which produced a thorough report after two years of scientific testing and investigation. There is no doubt that the wallpaper is of English late 18th century manufacture, and had been stuck on to plaster walls with a flour-based paste. (See picture 6) The fragments have been cleaned, restored, mounted to scientific standards, and are now to be seen at Tenterden museum as part of a display devoted to the theatre. (Pictures 7 and 8) Mr Frere-Smith restoring 3 Bells Lane in 1971 thought the wallpaper was of importance or he would not have preserved it. Perhaps it is of more importance than he realized?

3 Tithe Map 1843 (Detail). 217 split into two sections, linked with an arrow, is the present Theatre Cottage, 216 is the site of the theatre. The thin white outline is the conjectural position of the theatre.

4 The rear of 3 Bells Lane from Theatre Square (today). Now called Theatre Cottage, the changes since the 1920s are obvious.

5 The rear of 3 Bells Lane from Theatre Square (1920s). This picture taken in the 1920s shows the remains of the Tenterden Theatre at that time.

6 Fragment of wallpaper before restoration

7 Fragment of wallpaper after restoration

8 Fragment of wallpaper after restoration

More information on What’s the Play and Where’s the Stage can be found at www​.ves​per​hawk​.com
The Tenterden Museum is now open for the season until October.
www​.ten​ter​den​mu​se​um​.co​.uk