Chances are that you have started hearing about something called Bitcoins, cryptocurrencies, or digital cash. It all sounds very impressive and extremely clever, but it also sounds equally risky and confusing. However, when it gets reported that Bitcoins are now worth more than the price of gold for the first time ever, shouldn’t we at least have some informed idea about what exactly a cryptocurrency is?

Here then, is a normal person’s guide to cryptocurrencies.

What exactly is it?
In 2007, a man / group of techies (nobody knows for sure, which makes for a pretty good legend) called Satoshi Nakamoto started work on an open-source digital form of currency called Bitcoin. The basic notion was that a fixed number of ​‘coins’ would be created, limited to a final amount of 21 million bitcoins (BTC). This currency would be protected by using digital timestamps that would provide a proof-of-work chain that proved authenticity of the coin’s origins.

Cryptocurrencies such as Bitcoin, or any of the new currencies, collectively called altcoins, that have been created are decentralised. This means that no central authority or bank has control over them, and therefore cannot fix their price or limit their supply. The users and the free market decide upon adoption and value, based on their needs and perceptions of the digital currency.

The very first issue, or Block 0, of Bitcoins was created, or ​‘mined’ by Nakamoto in 2009, and became known as the genesis block. Nakamoto then paid computer scientist Hal Finney 10BTC as a test, in what became the very first Bitcoin transaction. In 2010, the very first public transaction took place, when a man paid 10,000BTC to a volunteer in London to order a pizza for him. Roughly, between $200 – $400 million worth of Bitcoin transactions currently takes place daily, although whether this figure will explode or collapse is anyone’s guess at the minute. 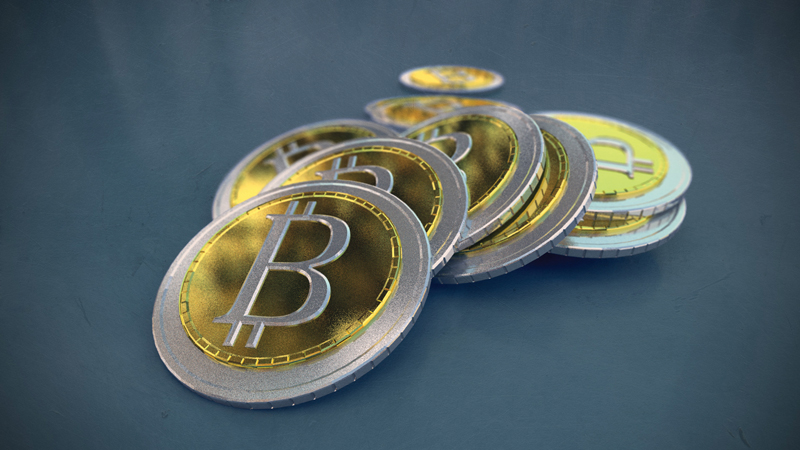 How do you use it?
This digital cash is used as a peer-to-peer payment system directly between users, meaning no middleman is involved. All Bitcoin transactions are collated and verified by other users that work on the network, and are recorded into blocks, which in turn make up a block chain, so that every transaction has a virtual ​‘paper trail’. This public record of transactions aims to eliminate fraudulent double-spending, where a user could pay for multiple transactions with the same coins. The computer users that ​‘mine’ through all the transactions to verify their origins are rewarded with newly issued Bitcoins, which is how new currency is being created, until the market capitalisation of 21 million coins will eventually be reached in 2040.

Bitcoins, or any of the other altcoins, can be bought through a specialised exchange in the same way that you would buy investment products, precious metals or foreign exchange. You have the choice of either holding onto your currency as an investment in your virtual wallet, or spending it as you would with cash. If you are using it as a currency, you are pretty limited to where you can spend it at the moment, as the concept of cryptocurrencies is still in its infancy. Growth is rapidly occurring though, and it may not be that long before Bitcoin, as the market leader, is accepted globally as a legitimate and widespread form of payment and investment.

Is it safe to spend or invest in?
Proponents of Bitcoin claim that the founding philosophy of trusting nobody is what ensures its survival and trust. However, various cases of fraudulent Bitcoin generation and theft have been recorded, so the network is not perfect. Numerous cases of exchanges that trade in cryptocurrencies around the world being hacked and robbed have also been reported. A survey by Wired concluded that nearly half of all cryptocurrency exchanges have so far closed for various reasons involving theft, hacking or bankruptcy. These cases have left a lot of people financially harmed and will do nothing for advancing the notion that cryptocurrencies are a safe alternative to other conventional forms of investment.

However, just like internet security, nothing will ever be perfect, and criminals will always find newer and smarter ways of stealing our money from us. But, as with most things in life, best practice and basic commonsense can go a long way in keeping us safe, and surely this will be the path that digital cash follows if it fully establishes itself in the near future?

Advantages
• Cryptocurrencies are not regulated by central authorities or banks, so trading costs can be kept to a minimum, and rate or supply tampering cannot occur from the government.

• It is a pretty anonymous form of wealth, although any ledgers may be able to trace ownership if need be.

• The price of Bitcoins or other altcoins could go through the roof in the near future, making them a good choice of investment if you buy at the right time.

• It is a good system that tracks previous ownership of the currency, making fraud and forgery extremely hard or unlikely. Future development can only improve cryptocurrency networks and security, in much the same way as the internet has developed.

Disadvantages
• The dollar value of cryptocurrencies is extremely volatile. In February of 2017, Bitcoin broke through the $1,000 barrier, but it remains to be seen if it can stay above it for the long term. If you don’t like massive and erratic price swings then investing in Bitcoins or altcoins will give you heartburn! The dollar value of digital currencies could crumble overnight and prove worthless – nobody can say for definite yet.

• Your average home-computer user will not be likely to mess around trying to find out how to buy bitcoins, which exchange to go to, where to store them or what to do with them yet. It is a very techie form of investment at this stage and not attractive to the general public.

• If I buy a thousand pounds worth of bitcoins what can I do with them? Mainstream adoption of any cryptocurrency has not been reached yet. Someone like Amazon could change that, but at the minute it is easier to buy goods and services online, with payment coming out of your bank account.

• Which currency should I invest in? Bitcoin is the market leader, but it also takes the most flak in the press. Should I rather invest in one of the altcoins, and if so, which one, as there are more than twenty available!

• Safety is a massive issue. We already know that exchanges can collapse and lose all your currency. Because the exchanges are not yet regulated by financial authorities there is no incentive to trust them. And if an exchange can be robbed so easily, what chance does a home user stand?

The United States now taxes profits from trading in cryptocurrency as a capital gains tax, so although no central authority (apart from the creators) control the supply or price of these altcoins, the government cannot be excluded from influencing the overall health of a cryptocurrency altogether. It also proves that governments are starting to take these digital currencies seriously now as they revise their tax laws around this new form of wealth.

Cryptocurrencies are becoming too big to ignore, and seem to be much more than a fad or novelty. It is early days yet, but new, innovative developments are bound to occur, making the journey of digital cash an intriguing one to follow, as it may just affect us all sooner than we think.