The county of Kent has been honoured by having twelve warships of this name. The first Kent, originally named the Kentish Frigate, was a ship of 46 guns built at Deptford in 1653. It spent seven years in Oliver Cromwell’s navy until re-named His Majesty’s Ship Kent in 1660, when King Charles II was restored to the throne.

The second HMS Kent was launched at Blackwall on the River Thames in 1679. She served for 65 years and gained four battle honours fighting the French and Spanish in the Mediterranean, including taking part in the Battle of Vigo in 1702. 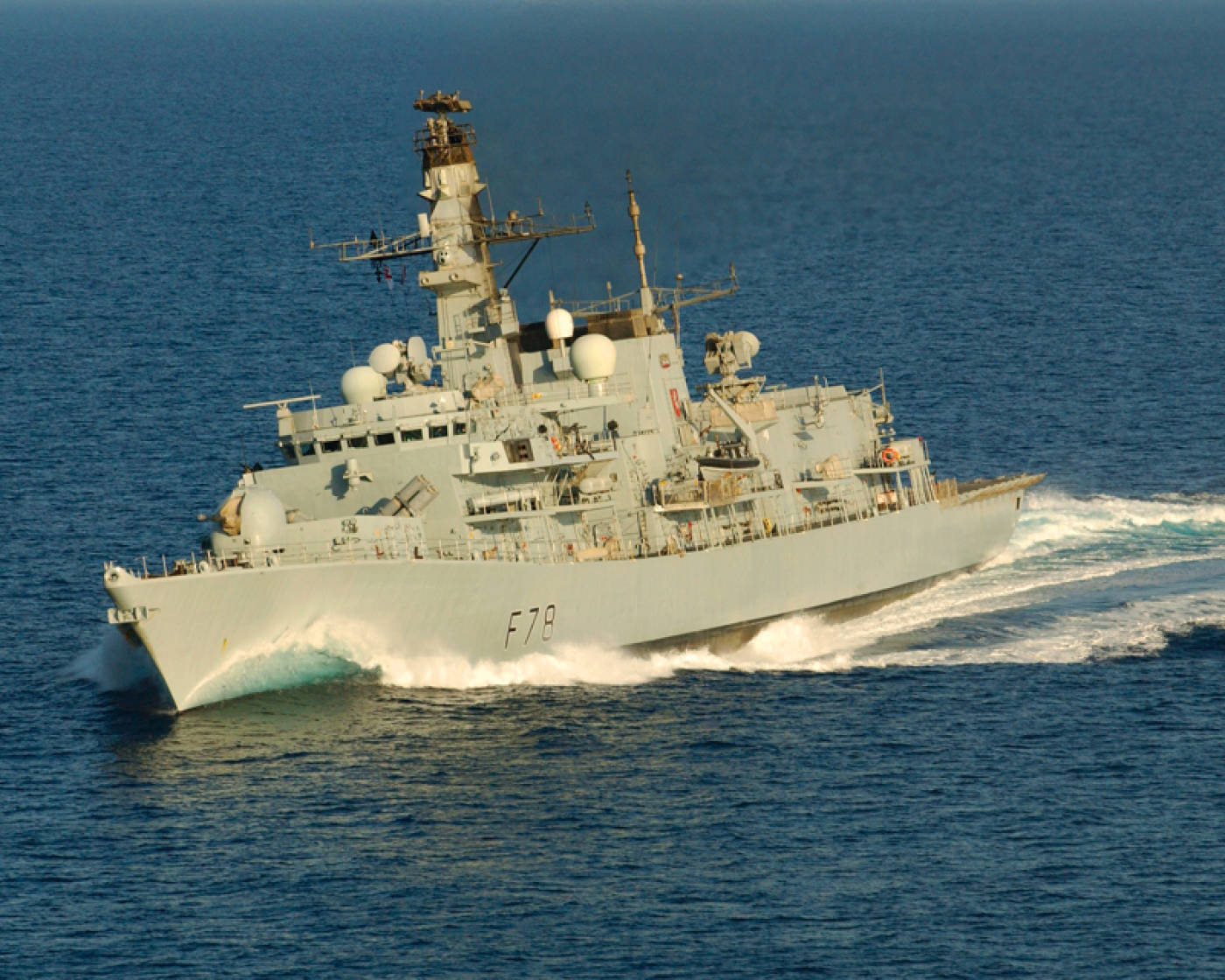 The next HMS Kent (74 guns) was commissioned at Deptford in 1746 and a year later, as part of Admiral Sir Edward Hawke’s fleet, was involved in destroying most of the French escorts of a strongly defended convoy returning from the West Indies. In 1756 she joined the East Indies squadron as Vice Admiral Charles Watson’s flagship and took part in successful actions against pirate strongholds in India, as well as the re-capture of Calcutta after the atrocities of the infamous ​‘Black Hole’. Sailors from HMS Kent also went ashore and served in the naval brigade, under General Robert Clive, at the decisive Battle of Plassey.

The fourth ship of the name did not see active service during her 22 years (1762−1784) and was almost destroyed in an explosion when a piece of wadding from a cannon was blown inboard and landed in an open arms chest on the deck.

In 1797, the fifth HMS Kent was built on the Thames and survived for nearly 100 years. A testimony to the enduring craftsmanship of British shipbuilders at that time. Early in her service she was the flagship of Admiral Duncan when he received the surrender of the Dutch fleet in 1799. Eventually laid up in Devonport she became so much of a local landmark that having been broken up in 1881 her figurehead was preserved at the main gate of the dockyard. During the nineteenth century, three more ships to bear the county’s name were either planned, or in service for a short time, before being renamed. 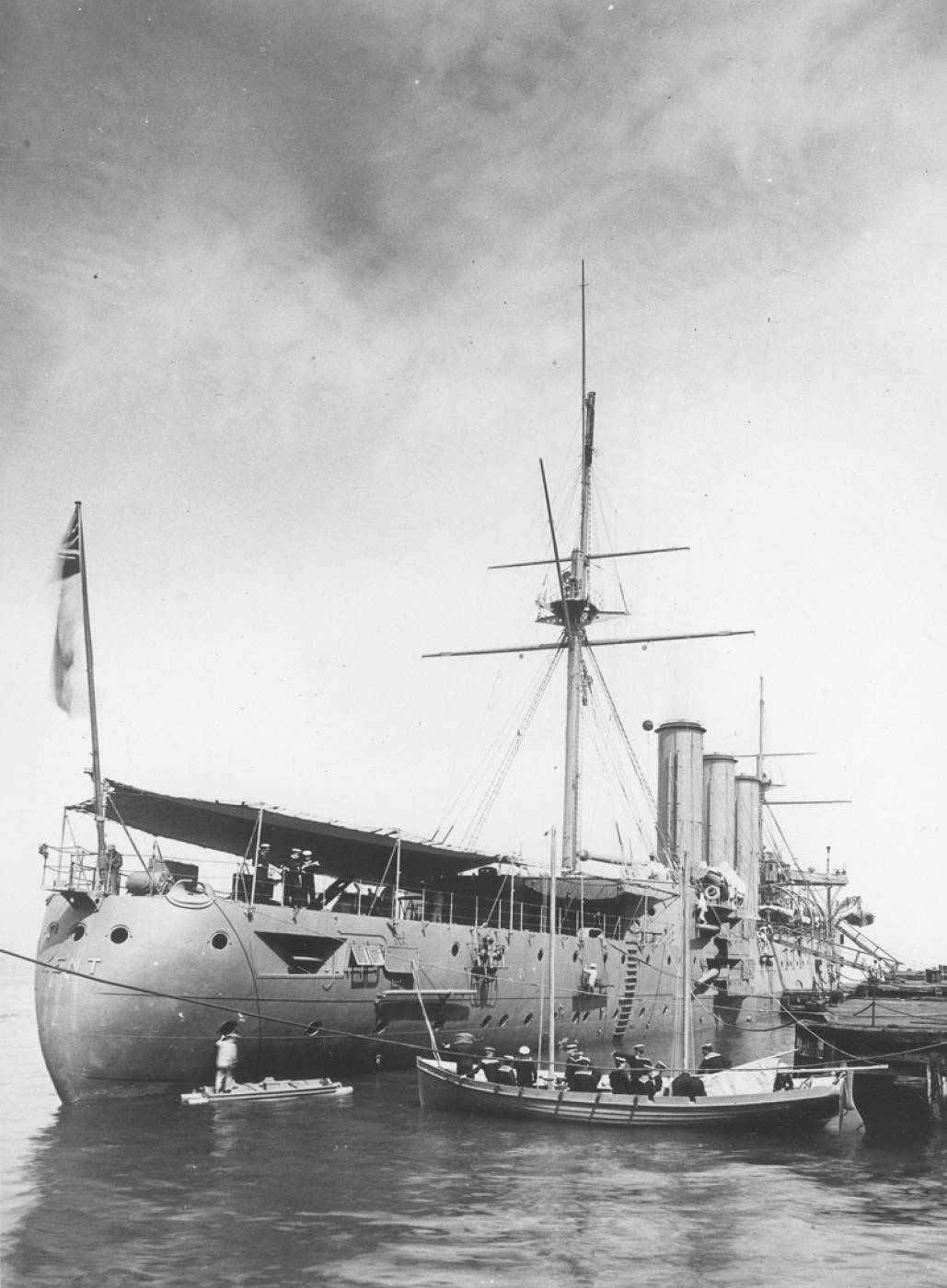 In 1901, the ninth HMS Kent was built at Portsmouth as a heavily armed first-class cruiser. At the outbreak of World War I she sailed for the South Atlantic and joined Vice Admiral Sir Doveton Sturdee’s squadron seeking to destroy a German squadron under Admiral Graf Von Spee. For seven hours she chased the German cruiser Nürnberg before sinking her.

The tenth HMS Kent, one of the first County class cruisers, was built in Chatham Dockyard and launched in 1926. For eleven years she was flagship of the China Fleet, a prestigious symbol of Britannia ruling the waves during the last years of the British Empire. After returning to Chatham, she sailed in 1940 to escort convoys in the Indian Ocean before transferring to the Mediterranean. Operating off the North African coast she received a direct hit from a torpedo dropped from an Italian bomber. Eventually she returned to Devonport but whilst being refitted was damaged by a bomb dropped on the dockyard. Repairs were finally completed and she took part in the notorious Arctic convoys to Russia seeing active service off Norway in 1944. Her distinguished career came to an end when she was broken up in 1948. 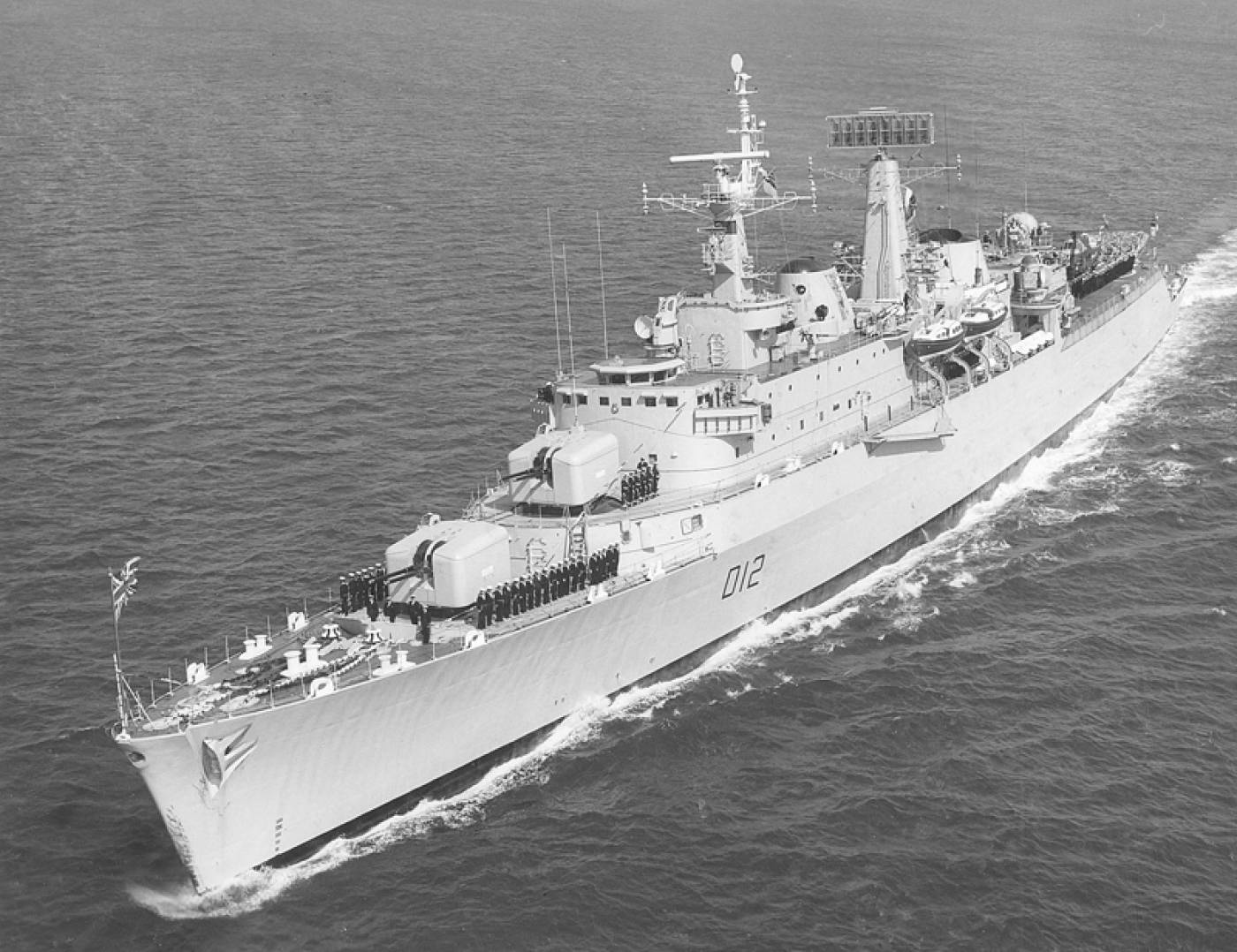 The next HMS Kent, the eleventh, was built by Harland & Woolf in Belfast and commissioned in 1963. One of the new class of guided missile destroyers she was a frequent visitor to Chatham Dockyard in the 1960’s and 1970’s. In 1968 she found herself in the national spotlight when talks between Harold Wilson and Ian Smith, to discuss the future of Rhodesia, were held onboard the ship in Gibraltar. She took part in the Queen’s Jubilee Review of the Fleet in 1977 and finished her days as the Harbour Training Ship in Portsmouth.

Following this line of illustrious warships, which amassed 16 battle honours, is the present and twelfth HMS Kent. A Type 23 Duke class frigate, one of a class of ships which is the mainstay of the modern surface fleet, she was built by Yarrow Shipbuilders and has the capacity to serve anywhere in the world. Launched on 27 May 1998 and commissioned on 8 June 2000, she was the first ship to join the Royal Navy in the 21st century. She is known as the Millennium Frigate.

Today’s HMS Kent displaces 4,900 tonnes and is powered by a combined diesel-electric and gas propulsion system giving a top speed of 28 knots. She has an impressive range of weapons with 2 quadruple Harpoon missile launchers, 32 vertical launch Sea Wolf surface-to-air missiles, a 4.5inch Vickers Mk 8 gun, and a Westland Lynx HM.8 helicopter armed with Sea Skua anti-ship missiles, Sting Ray anti-submarine torpedoes and depth charges. The ship was originally designed for anti-submarine warfare but a key role for the frigate today is maritime stability and security at sea by combating challenges such as drug-trafficking, terrorism and international crime. 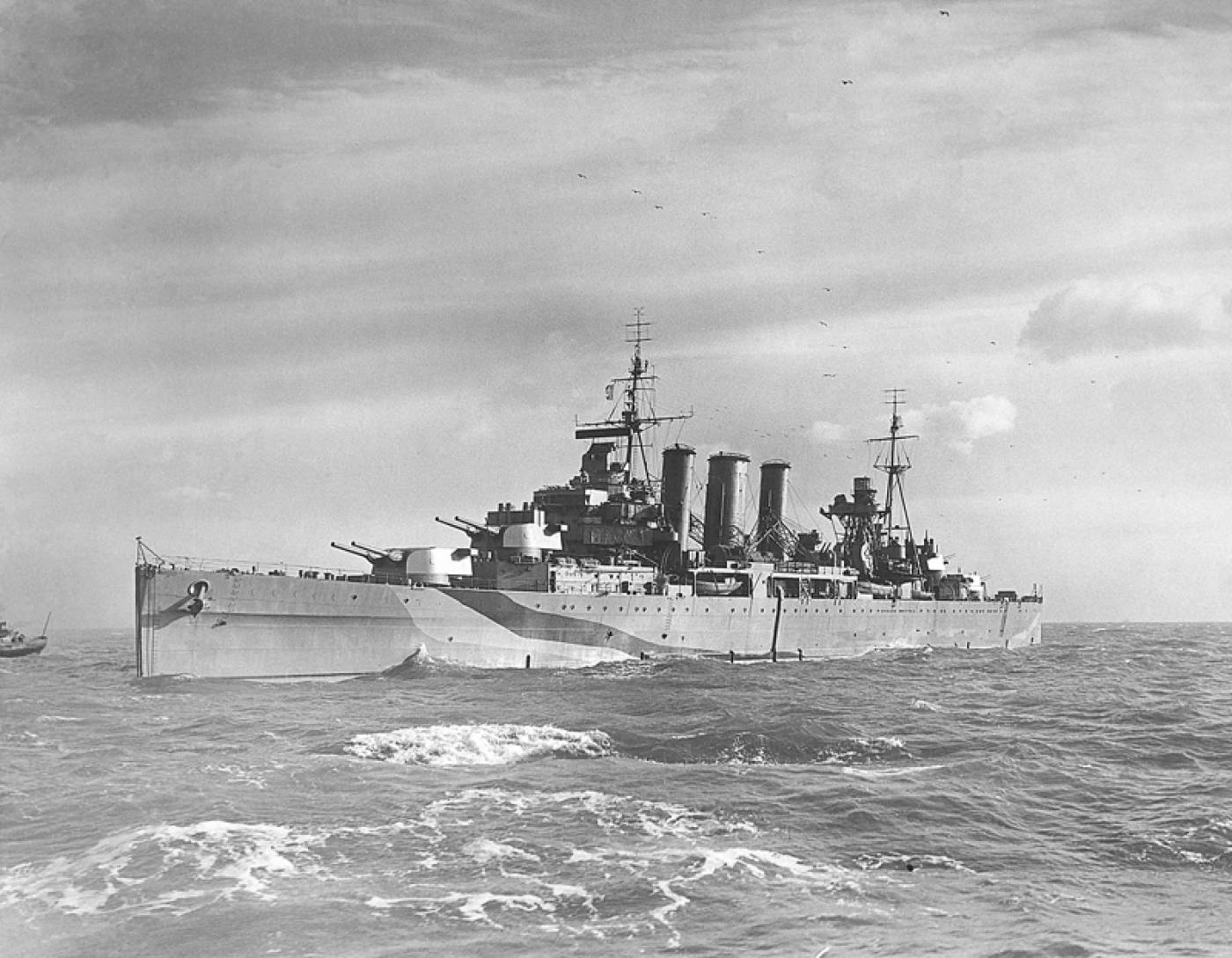 With a crew of 18 officers and 156 sailors, of whom a fifth are female, the ship is proud of its motto ​‘Invicta’, meaning ​‘Unconquerable’, and has strong affiliations with the county. These include The Worshipful Company of Mercers, the premier Livery Company of the City of London; Demelza House Children’s Hospice, Sittingbourne; Shepherd Neame Ltd, Faversham; the Confederation of Cinque Ports; and Kent Air Ambulance. Historical connections with the county too are strong. The ship’s bell of the ninth HMS Kent is in Rochester Cathedral, and a fragment of a 24 foot long silk pennant flown by the same ship during the Battle of the Falkland Islands in December 1914 is displayed in Canterbury Cathedral.

HMS Kent is proud to have HRH Princess Alexandra, The Hon Lady Ogilvy, as the ship’s sponsor. Both she and her brother, HRH Prince Michael of Kent, visit the ship whenever official duties permit..

Prior to entering the Frigate Refit Complex in Devonport late last year year for extensive modernisation, including fitting of the SeaCeptor missile system in place of Sea Wolf, the ship had paid two visits to London. The second in October 2016 was described by her Commanding Officer, Commander Daniel Thomas. ​“This will be a brief stop as we welcome a number of affiliates, guests and dignitaries to the ship. Our aim is to give them a taste of what HMS Kent is capable of, from high-end warfighting, disaster relief, defence diplomacy and maritime security operations”.

The frigate is no stranger to these duties having returned to the UK in May 2016 after a seven month deployment to the Gulf where the ship was tasked with helping to keep some of the busiest shipping lanes free from the threat of piracy and terrorism. In addition to supporting US and French aircraft carrier battle groups.

In paying tribute to the hard work put in by his crew, on return from an earlier deployment, the ship’s commanding officer commented ​“They have done everything possible to ensure that HMS Kent has represented the UK and the Royal Navy with absolute professionalism half-way round the world”.

After three and half centuries there could surely be no more fitting accolade for this latest warship named Kent.

All images courtesy of NMRN