Each year the Rotary Club organises a Young Writers competition which invites students to respond creatively to a particular topic. This year the title given was ​‘Our World is Beautiful’. More than 150 pupils from six schools entered the initial local round. Battle Abbey School entered two students: Amber Rampling (Year 11) and Ellie Bostock-Smith (Year 8) who represented the school in the senior and intermediate competitions respectively. 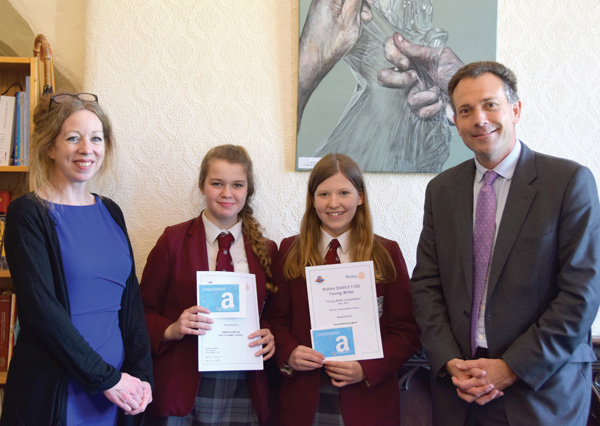 Mrs Simpson,(pictured with Headmaster David Clark and the girls) Head of English at Battle Abbey said, ​‘We were delighted when both Amber and Ellie’s entries won the local competition. Even more impressively, they both went on to win the District round of the competition. The District round includes 86 different clubs spread across Kent, East Sussex and South East London, so the girls were up against stiff competition. They both then went through to the National round of the competition, which includes entries from Great Britain, Ireland and as far away as Gibraltar.’

‘When the certificates were being awarded, there was an additional surprise. We found out that Ellie came third in the National competition, which is a phenomenal achievement. Both girls have demonstrated a true gift for writing and should feel very proud of what they have achieved.’