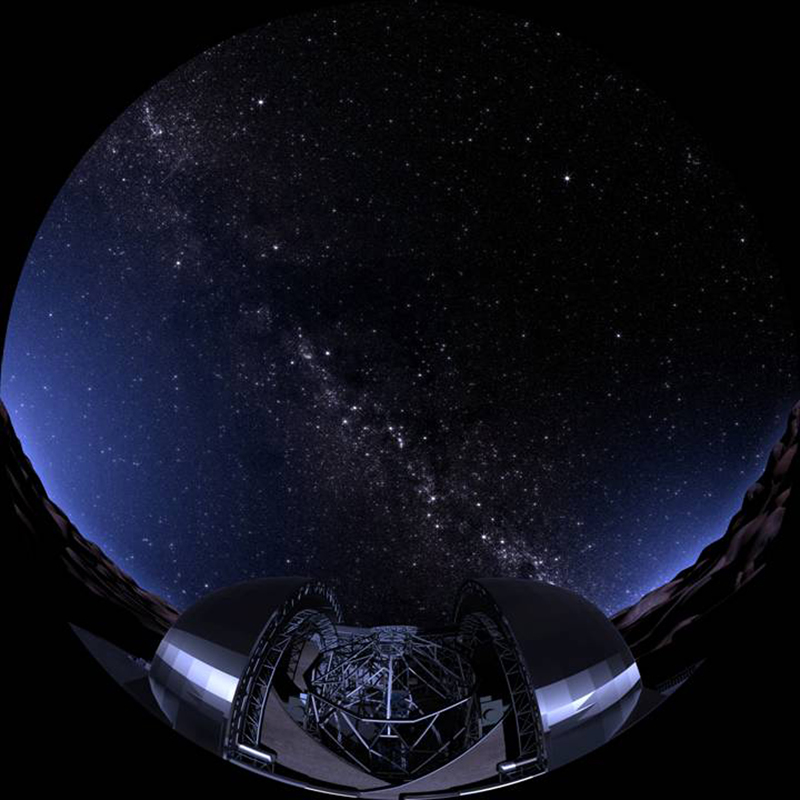 For over 400 years, stargazers have aspired to see ever more detail of celestial wonders and ever deeper into space. Melanie Davies reports on a new breed of giant telescopes that will deliver tantalising astronomical data to a new generation of astronomers.

In the late 1990s and early 2000s, a raft of 8‑meter class, single mirror optical telescopes emerged, rivalling the 6‑meter Russian BTA-6 which had held the record for the largest single mirror telescope since1975. And as early as 1993, segmented mirrors were used in the 10-metre Keck 1 telescope and later, in 1996, by its sibling Keck 2, both using 36 mirror segments. The twin Keck telescopes, built at the Mauna Kea Observatories in Hawaii and operated by the USA, were equalled in size by the segmented 10-metre Hobby-Eberly Telescope (HET) in 1997. The HET, which uses 91 segmented mirrors, is jointly operated by the USA and Germany and is sited at the McDonald Observatory in Texas.

At 10.4‑metres, the Gran Telescopio Canarias (GTC) – or Great Canary Telescope – is currently the largest segmented optical telescope in the world. Situated on a volcanic peak, over 2,200-metres above sea level at the Roque de los Muchachos Observatory in the Canary Islands, the GTC Project is a partnership between Spain, Mexico and the USA. It saw ​‘first light’ (its first astronomical observation) in 2007 and was fully operational from 2009.

Segmented mirrors use adaptive optics, which correct the effect of distortion from turbulence in the Earth’s atmosphere by using hundreds of actuators – mechanical devices that change the shape of deformable mirrors at an incredible rate of about 2000 times per second – providing near-perfect detail for observing and imaging planets, stars, and galaxies. And unlike the giant scopes of the past which almost all used equatorial mounts, modern professional telescopes use computer-controlled altitude-azimuth (often shortened to altazimuth or altaz) mounts.

Today, there are a handful of enormous reflecting telescopes under construction including the European Southern Observatory’s 39-meter Extremely Large Telescope (ELT), with a primary mirror using a staggering 798 hexagonal 1.4‑metre segments. Work began in 2014 at the 3000-metre mountain top site at Cerro Armazones in the Atacama Desert in Chile. First light is expected in 2024 when it will take the lead as the world’s largest optical/near infrared telescope. The European Southern Observatory (ESO) already operates three world class observing sites in Chile – La Silla, Paranal (home of the Very Large Telescope) and Chajnantor – at Cerro Armazones, close to Paranal, the ELT will become ​‘the world’s biggest eye on the sky’.

Work on the telescope is now well under way, with contracts for the 80-metre high dome being signed in May 2016 and in January this year, contracts were signed for some of the ELT’s major optical components including the 4.2‑metre secondary mirror. This titan of a telescope will use a complex five-mirror system, never before used, and will require optical and mechanical components that stretch modern technology to its limits. Its advanced adaptive optics will produce unimaginably sharp astronomical images and its light-gathering power will exceed that of all telescopes to have gone before it.

But the ELT is not the only astronomical giant on the drawing board. With partners from Canada, USA, India, Japan and China, the proposed Thirty Metre Telescope (TMT) will operate in ultraviolet, visible and mid-infrared wavelengths of light. The TMT will be a vast, wide-field telescope with a 492-segment, 30-meter primary mirror, a fully active secondary mirror and an articulated tertiary mirror. Its optical beam will feed a constellation of adaptive optics systems and science instruments. Plans for the telescope are to address questions in astronomy ranging from understanding star and planet formation to unraveling the history of galaxies and the development of large-scale structure in the Universe. 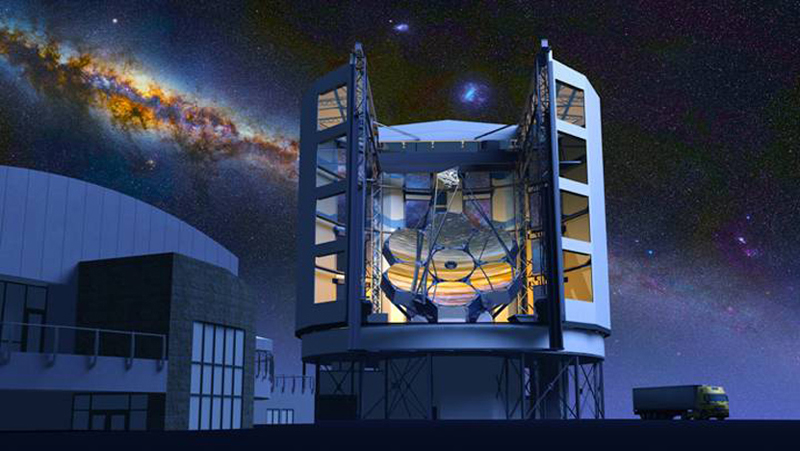 In 2009, Mauna Kea in Hawaii was chosen as the preferred construction site for the TMT, rated by some as the best observing site in the northern hemisphere. But in 2014, after groundbreaking of the construction site had begun, native Hawaiians began to protest, claiming the Hawaiian mountain was a sacred site. Then at the end of 2015, native activists won a ruling from Hawaii’s Supreme Court that invalidated the TMT’s building permit because of procedural violations. So the TMT is now looking for a new home, ideally somewhere in the northern hemisphere, to compliment observatories in the southern hemisphere; sites at Baja California in Mexico and the island of La Palma off the coast of Morocco are in the running.

Next up on the list of planned mega scopes is the Giant Magellan Telescope (GMT). The GMT uses a unique design with seven 8.4‑metre primary segments with a resolving power of a 24.5‑metre primary mirror – ten times greater than the Hubble Space Telescope. Four of the seven mirrors have already been cast, enough to start observational operations. The project is being run by a consortium headed up by the USA, in partnership with Australia, Brazil, and Korea. Construction has already begun at Las Campanas Observatory in Chile; a site chosen for its outstanding astronomical seeing (an astronomical term meaning excellent visibility due to still air). With an expected completion date in 2025, the GMT will take second place in the race to produce one of the world’s biggest optical telescopes.

Another interesting project worth a mention is the Event Horizon Telescope array (EHT). An array telescope uses many instruments, working together as one. The EHT project will use a global network of radio telescopes creating a high sensitivity, high resolution instrument capable of observing the immediate environment – known as the event horizon – around the supermassive black hole, Sagittarius A*, at the centre of the Milky Way. Through the technique of very-long-baseline interferometry (where the interference of two beams of light are used to make precise measurements), many independent radio antennae separated by hundreds or thousands of miles can be used together to create a ​‘virtual’ telescope with an effective diameter of the entire planet!

These big telescopes will undoubtably produce astronomy’s next big discoveries. With so many projects either under way or in the pipeline, the excitement is palpable!