The Pleiades
Bringing a little sparkle to the autumn nights

The Pleiades is an open star cluster in the constellation of Taurus. This enigmatic group of stars is known by many names; the Seven Sisters, Messier 45, and Melotte 22 to name but a few. The Pleiades rise in the east just after sunset from the beginning of November, rising slightly earlier each night throughout the autumn and winter. 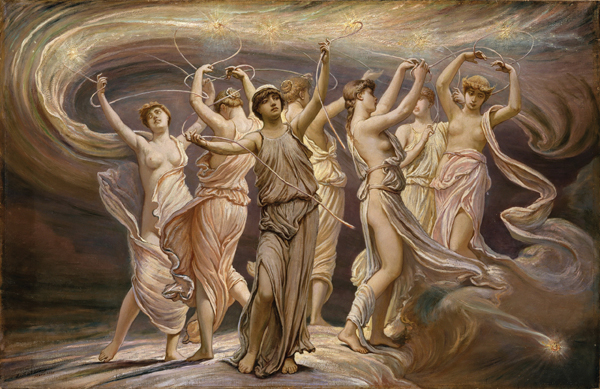 The Dance of the Pleiades by Elihu Vedder, 1885, symbolising the Greek myth about the Seven Sisters ©Elihu Vedder

The Pleiades appear in star maps as far back as 15,000 BC. The Lascaux Caves in south west France, discovered in 1940, depict an astonishingly accurate map of the heavens from the Upper Palaeolithic Period. Some of the best preserved paintings were found in the ​‘Hall of Bulls’ and clearly show the constellation of Taurus, the Pleiades, and the Hyades – another open star cluster near the ​‘eye of Taurus’.

The Pleiades have evoked fear and wonder throughout human history, being the focus of myths, legends and folklore around the world. Aboriginal Dreamtime mythology from Australia tells the story of ​‘Star Dreaming’ – a very similar tale to those from Ancient Greece. And in New Zealand, the Pleiades are called ​‘Matariki’. In the Māori language, Matariki is both the name of the star cluster and also of the season of its first rising around the winter solstice, signalling the Māori New Year. It is marked by the flying of kites, lighting of lanterns, and the celebration of new life. 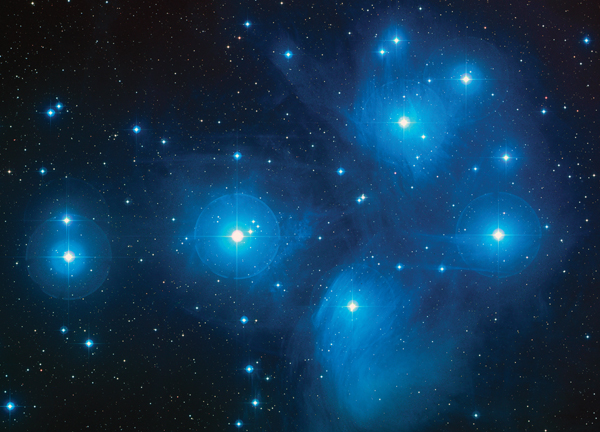 In Aztec culture, the Pleiades were known as ​‘Tianquitzli’. They had a major significance for time keeping and disaster avoidance! (The word ​‘disaster’ comes from the Latin ​‘dis-astro’, meaning misalignment of heavenly bodies.) The Aztec calendar used a 52-year cycle and was based on the opposition of Tianquitzli – time was measured using the movements of the star cluster and the Sun. At midnight at the end of every 52-year cycle, the Aztecs performed a human sacrifice to please their gods and to ensure the continued movement of the heavens. They believed that if the Pleiades failed to continue their movement across the sky, the end of the world would ensue!

In Japan, the word for the Pleiades is Subaru, meaning ​‘gather together’ or ​‘cluster’. The Japanese car manufacturer adopted this word as their trade name and incorporated six of the visible stars within their logo. The stars represent the five companies (small stars) that merged into one (large star) to form Fuji Heavy Industries – Subaru’s parent company. 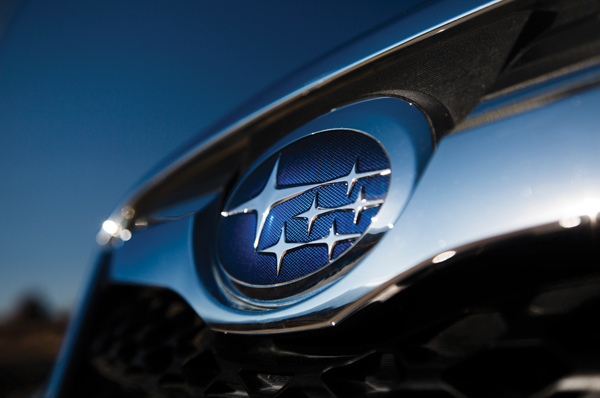 But the best known stories are from Ancient Greece, where the Pleiades represented the seven daughters of Atlas the Titan and Pleione the sea nymph. The most commonly told myth has it that while Atlas was busy holding the world on his shoulders, the mortal hunter, Orion, took a fancy to his beautiful daughters and chased them across the land. Zeus, ruler of the Titans, took pity on Atlas and turned the siblings first into doves, and later set them in the sky as glittering stars. Orion was later killed and placed in the sky, forever chasing the ​‘Seven Sisters’.

The Seven Sisters is one of the closest open clusters to Earth at about 440 lightyears away. Light travels three trillion miles in one year, so as a measure of distance, 440 lightyears seems a long way off, but for an open cluster, its fairly close. Looking at the stars today, we are effectively looking back in time, seeing them as they appeared 440 years ago. Because of this relatively close proximity, it has been the subject of much scientific study. When telescope technology allowed close-up views of the individual stars, they were discovered to be surrounded by a veil of nebulosity – a cloud of gas and dust which appeared to shroud some of the brightest stars. Early research suggested that these stellar clouds were the remains of a starbirth nebula from which they formed. More recent studies have determined the nebula to be unrelated to the stars, and to be a cosmic fluke of nature. The star cluster is slowly moving towards the constellation of Orion, and it just happens to be interacting with this nebula on its way through.

The cluster is 125 million years old – making the stars relatively young by stellar standards. The stars are mostly hot blue giants with temperatures of around 20,000˚C. Which, compared to our Sun (at an average 5,500˚C), is positively roasting! 125 million years ago, the Pleiades are thought to have looked very much like the Orion Nebula as we see it now – one of the best known stellar nurseries in the process of producing new stars from the remnant of a supernova explosion.

A recent census, carried out earlier this year, revealed the group to contain over 2000 stars – a much higher number than previously thought. The stars are bound together because of gravity, but in about 250 million years time, the stars will have drifted away from each other and will no longer be the closely packed, sparkling lights that adorn the autumn and winter skies of today. This will happen because of interaction with other stars and giant gas clouds nearby, kicking out individual stars and dispersing the group.

If you’re not sure how to find the Pleiades, look out for Orion’s Belt (visible from about 10pm at the beginning of November) and follow an imaginary line almost straight upwards until you find a bright, slightly orange star called Aldebaran (the eye of Taurus the Bull). Then continue upwards, but this time arching slightly to your right, and you’ll soon come to the Pleiades cluster. Under normal conditions, you can expect to see about six of the brightest stars in the group. But if you’re lucky enough to have dark skies and very good visibility, you might see as many as 12 (you’ll need good eye sight to see that many though). They are best viewed through binoculars or a small telescope, when hundreds of stars become visible.

Melanie Davies is a space science communicator, science writer, and Fellow of the Royal Astronomical Society. Based in Hastings, East Sussex, she writes for astronomy journals and is an active space science blogger. She also runs a social enterprise called Creative Space, offering astronomy outreach and public engagements.
cre​ative​-space​.org​.uk