The dial is often referred to as ​“the face of the watch”. Ressence has made this image a reality with a unique horological complication that at every moment visually expresses the course of time. 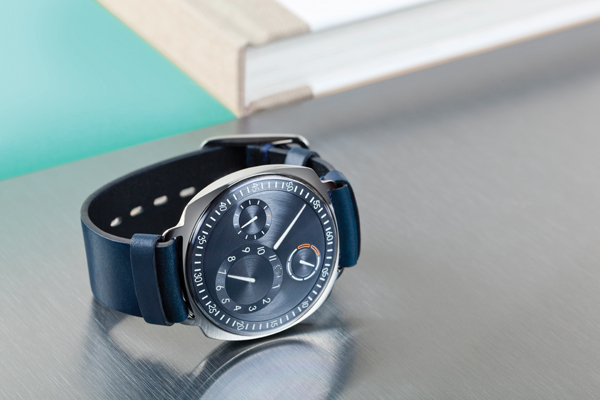 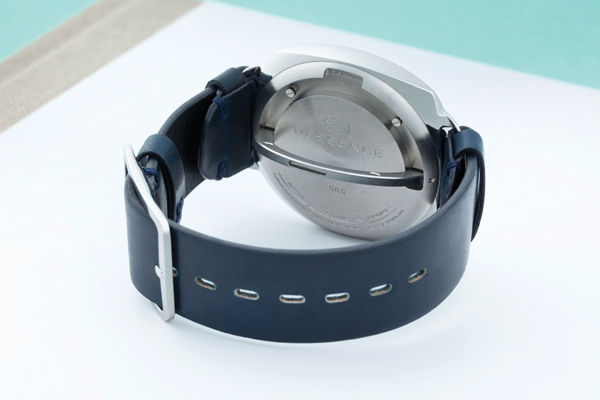 Philosophy
Ressence, an acronym serving as a maxim establishing the brand’s mission statement: the Renaissance of the Essential, a return to the primary source when astronomers scrutinized the movement of the stars to unravel the mysteries of time.

In conceiving his first horological creation, industrial designer Benoît Mintiens considered what it might look like if the mechanical watch was a 21st century invention based on today’s cognitive technologies and sciences. In response he opted for a holistic approach, placing the end user at the heart of his work. He becomes the ultimate criterion for evaluating an approach designed to express the course of time in the most intuitive way possible with an ergonomic focus at the service of the function. 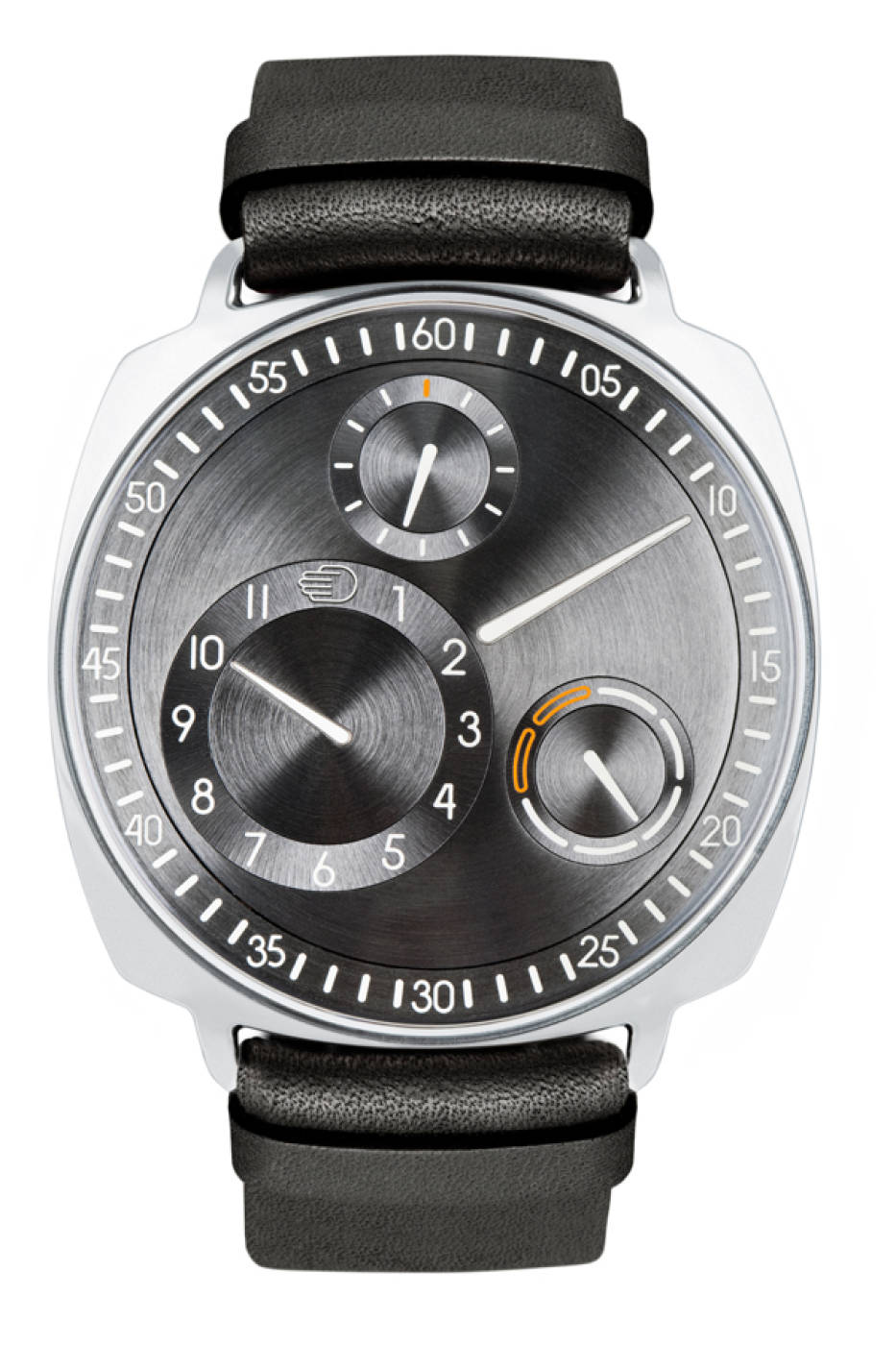 Concept
The vector is Haute Horlogerie which like a Red Line crosses five centuries of history. However, Ressence reverses the traditional mode of thought. Ressence watches are designed from the outside to the inside. Although strikingly innovative, the technologies implemented are relegated behind the scenes. What is more important is the sensation of the user experience on looking at a watch that seems to project the temporal indications onto the glass. Its mono-surface dial is composed of discs and rings adjusted to the micron. 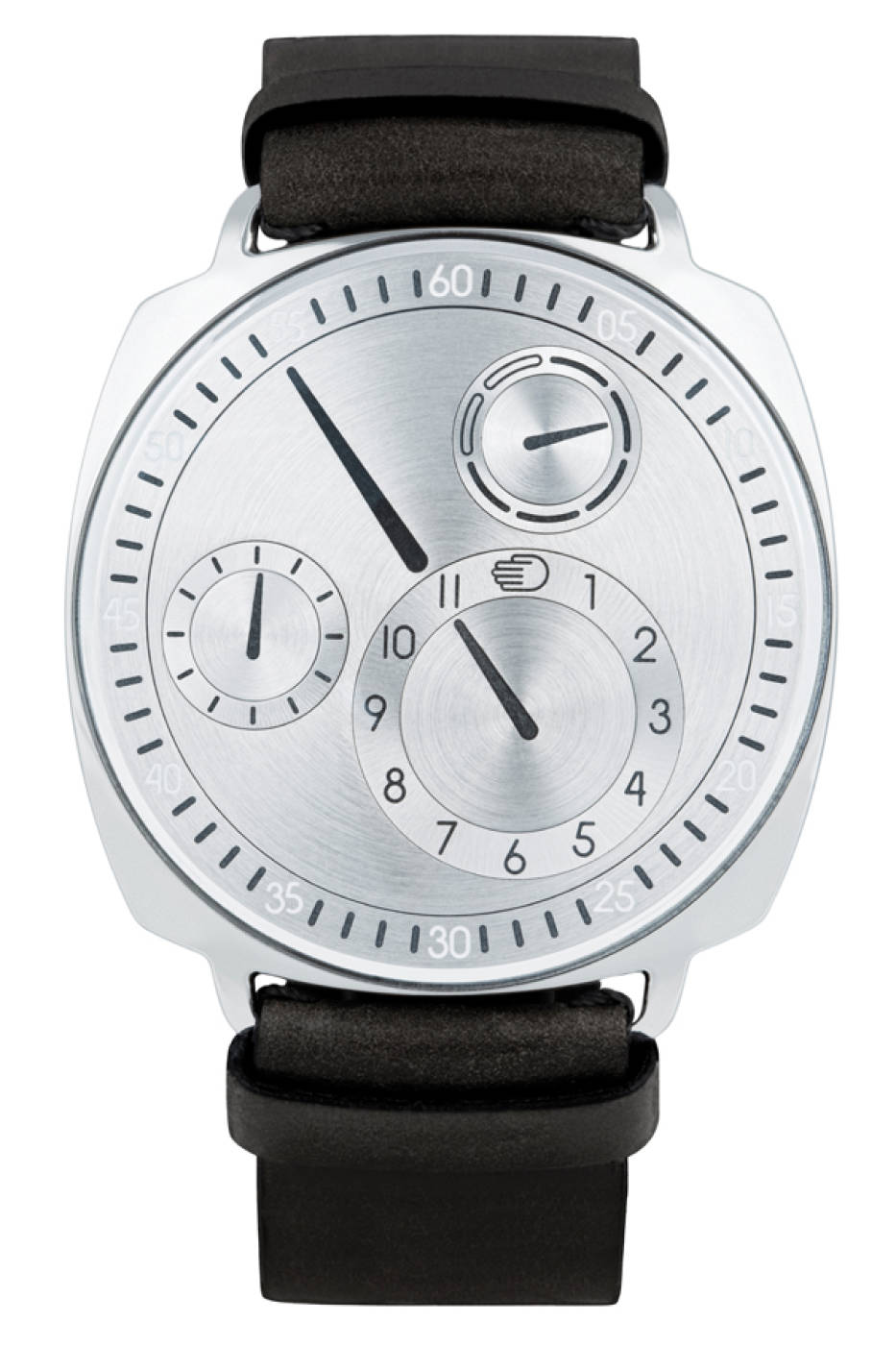 Exit the physical hands. They are replaced by graphical lines in order to reproduce the angles through which we are accustomed to reading the time. All Ressence watches share the same inimitable DNA. The main dial, as well as the auxilliary dials, revolve continuously, behaving like moons around a planet. This means that the face of the watch changes continuously ‑which is the essence of Time.

Quality and excellence are imperative for the success of this approach.

A Ressence watch is the result of years of research and development. 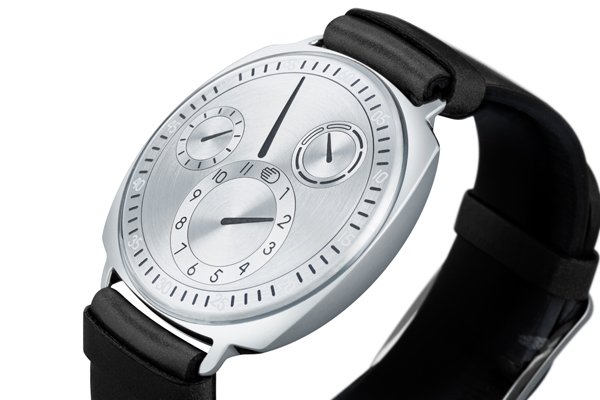 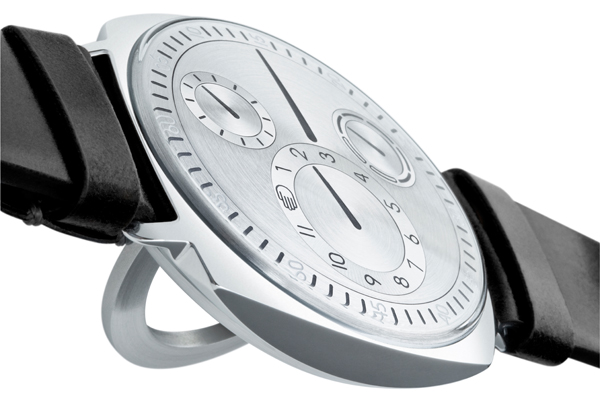 Each watch is subjected to an internal certification procedure (R500H) ‑500 hours of rigorous examinations and tests applying 6 crucial criteria.

Thanks to its freedom to think differently, Ressence has already gained international recognition. Awards include: Horological Revelation Award at the 2013 Grand Prix d’Horlogeriede Genève (GPHG) and Design Star at the Watchstars Awards 2015. In 2016, the Fondation de la Haute Horlogerie (FHH) certified Ressence as one of the 64 brands in the world belonging within the perimeter of Haute Horlogerie. 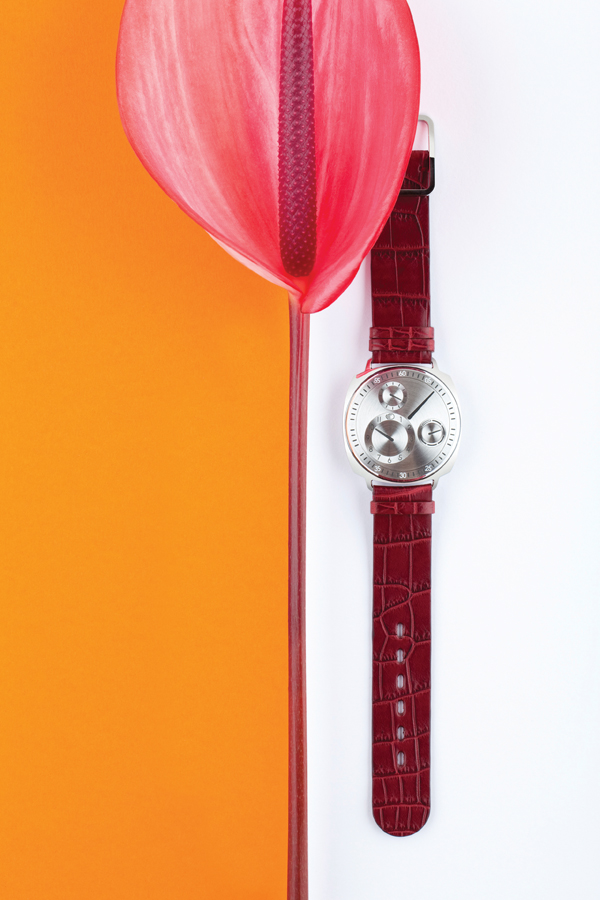 Ressence micromechanical innovations
Ressence watches have so far capitalised on 6 technical solutions based on physical principles. Each of these innovations, never before seen in watchmaking, contribute to the same product relevance: great readability and high user experience.

Display by discs (all models)
It was in 2011 on the ZERO SERIES watches that Ressence unveiled for the first time the patented invention on which rests its new expression of Time: ROCS which stands for Ressence Orbital Convex System. Fully designed and developed in-house, this unique horological complication is composed of co-planar discs and rings of different sizes, curved to match the bend of the glass that covers them. Recto, the discs create a flush dial. Verso, they serve as a platina and bridges to the watch mechanism with a large number of components ‑from 107 components for the basic version (ROCS 1) up to 215 components for the ROCS 3 which drives a six-fold display complication. Each of the time indications of the Ressence watches is generated by the ROCS from a single piece of information provided by the automatic base movement: the minute. 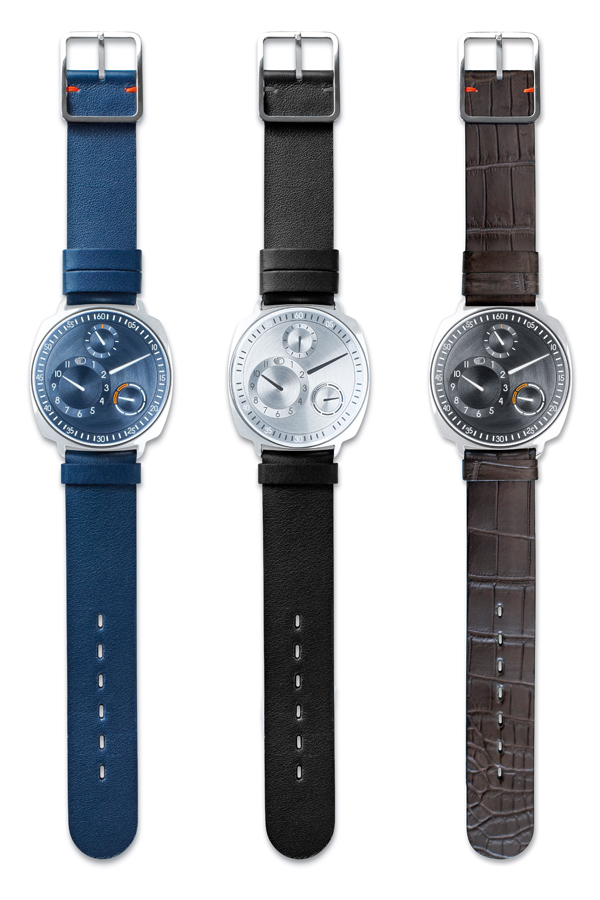 With the ROCS, time-information is displayed on a single surface, both eyes see a same image (like words on a sheet of paper), while on a traditional watch, where the hands and dial are superposed, the projected image is different for each of the two eyes because of its 3D nature. The choice to focus on the minute disc is also dictated by a concern for legibility. In most cases, this is the information you first look for when checking your watch. Every minute that passes, you observe a different dial.

No crown (all models)
In the pursuit of improved ergonomics, the fluid organic design of the Ressence watches becomes imperative in obtaining a completely sleek surface. The case is virtually invisible and the crown has disappeared from the scene. Right and left-handers are now equally well-served. On TYPE 1, TYPE 3 and TYPE 5 the crown is replaced by an alternative of ingenious simplicity, namely, the rotating back of the watch made of sapphire crystal, which assumes the functions of manual winding and time setting.

Behind the easy setup/winding system also lies the logical principle that the watch only needs to be set when it has stopped. Simply setting the watch winds it at the same time.

NOVELTIES 2017
TYPE 12 ​“Squared”, the Dress Watch according to Ressence

Less ​“dematerialised” than the other models in the collection, the TYPE 12 subtly reintroduces a few classic watch codes for a more assertive wrist presence. Thinner and slightly smaller than the other Ressence watches, this new Dress Watch plays the mix with proposals of exclusive straps for both men and women.

While remaining faithful to the DNA of Ressence, the TYPE 12 differs distinctly from the rest of the collection both in its design and in its material. Borne from the intersection of 6 spheres, it has a cushion shape case. It is also distinguished by its integrated lugs and an interchange a blebracelet system inherited from the TYPE 3.

Unlike the other Ressence watches, the TYPE 12 is not made of Grade 5 Titanium. Its case is in polished stainless steel, with a satin finish back. This case is thinner, due to the absence of the sapphire case back acting as a crown. Instead, there is a small retractable lever, the handling of which adds a new visual and physical effect. When setting the time, the rotation of the lever corresponds exactly to the movement of the discs on the dial in a ratio of 1 to 1. An up-to-datereminder of the key once used to wind clocks, watches and mechanical toys.

Finally, the in-house complication ROCS 1 has been updated with a user-friendly quick daysetting. This technical evolution is also available on the original TYPE 1 models.

The Ressence TYPE 12 is available in 4 dial versions: Silver, Ruthenium, Night Blue and Champagne. It is produced in an unlimited but numbered edition. 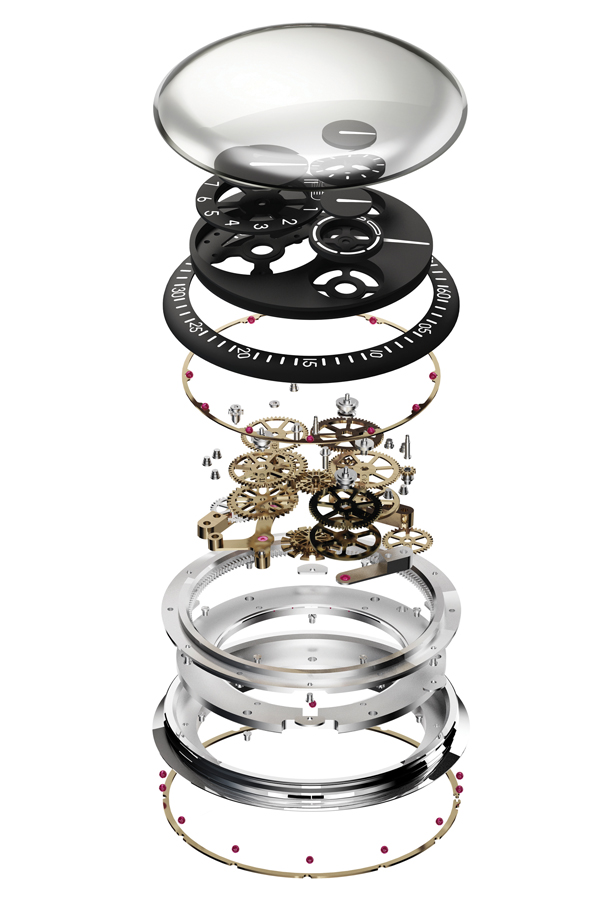