A great eatery on the Buckhurst Estate

Found on the beautiful Sussex Weald, just over three miles south-west of Tunbridge Wells, in the village of Withyham, is the distinctive white weather-boarded Dorset Arms.

Set back from the road, in the heart of Ashdown Forest, is the Dorset Arms, a 16th century farmhouse with its slender chimney stacks, sharp gables and careworn tiles. It was built in 1595 and has run as a public house since 1735. 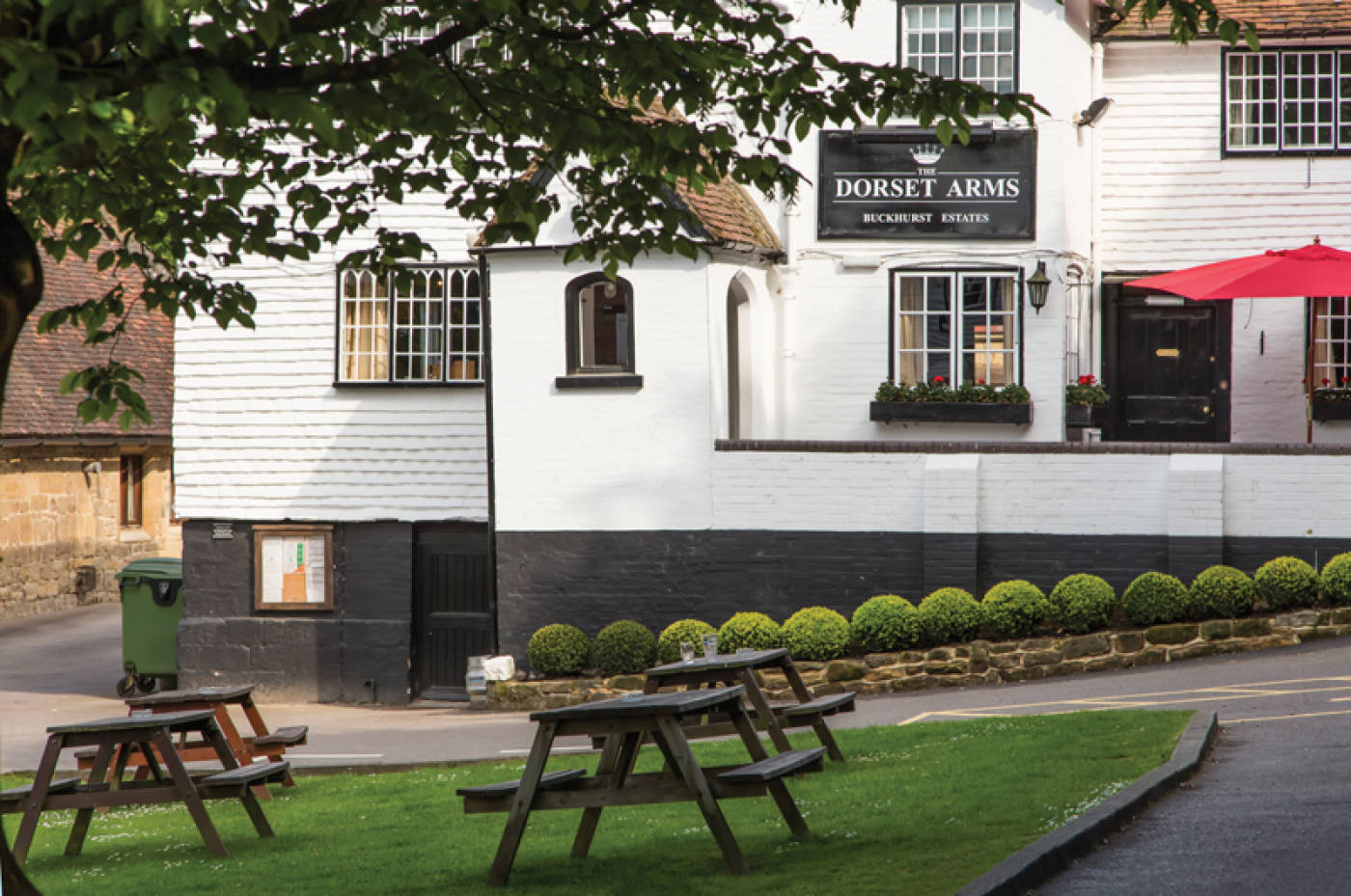 The pub, now a listed building and part of the Buckhurst Estate, was named after the heads of the local landowning family, the Dukes and Earls of Dorset. Lord De La Warr, the present Earl, has restored The Dorset Arms to its former glory, retaining its character and traditional village pub atmosphere in its restored wooden ceiling beams, ancient Sussex oak floors and flagstones, scuffed wooden tables and cushioned wall benches. Thankfully it’s not been an overkill restoration as it remains at heart a true village local, with darts and cask ales from local breweries, including two regulars – Harvey’s Sussex Best Bitter and Larkins Traditional Ale, which in turn attracts local groups like the cricket club, the art group and the horticultural society. Country pubs don’t come more authentic than this. 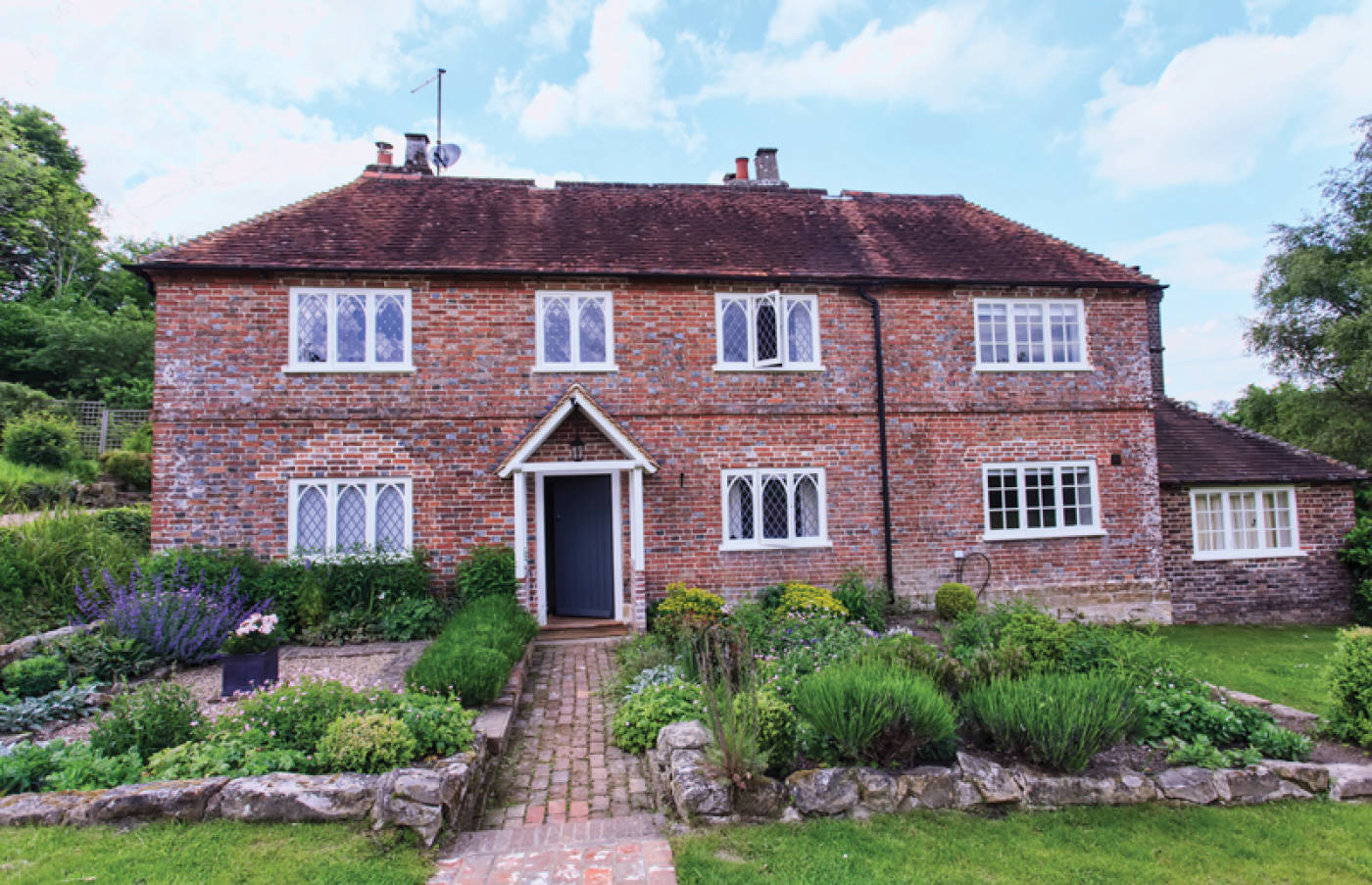 Although the fortunes of The Dorset Arms have been revived by Lord De La Warr, it’s Lady De La Warr’s eye for detail you can see in every room. Locals love the countryfied dining experience, which brims with heritage, an eclectic mix of battered dining tables and chairs, bookshelves brimming with old titles, and family paintings adorning the walls. 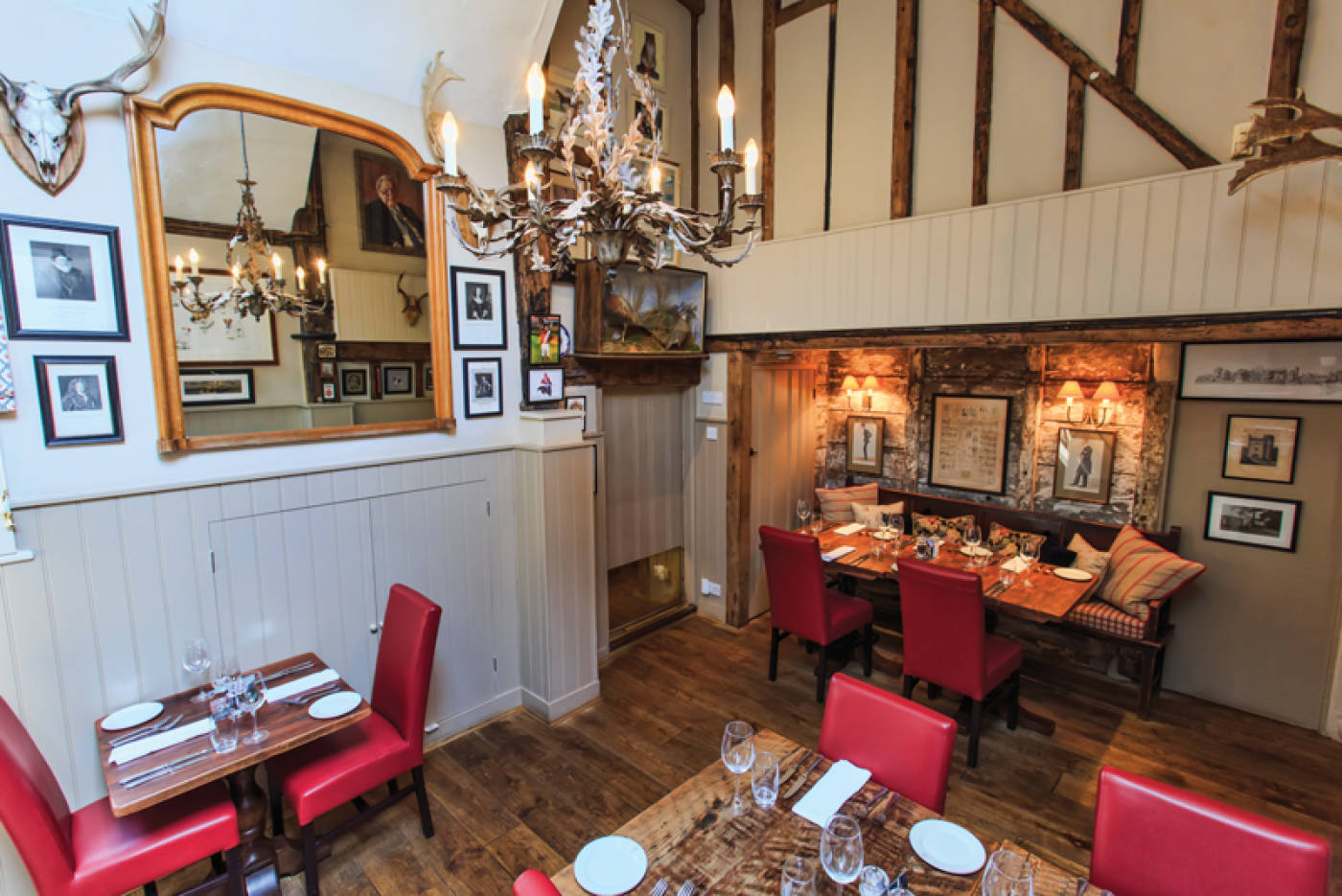 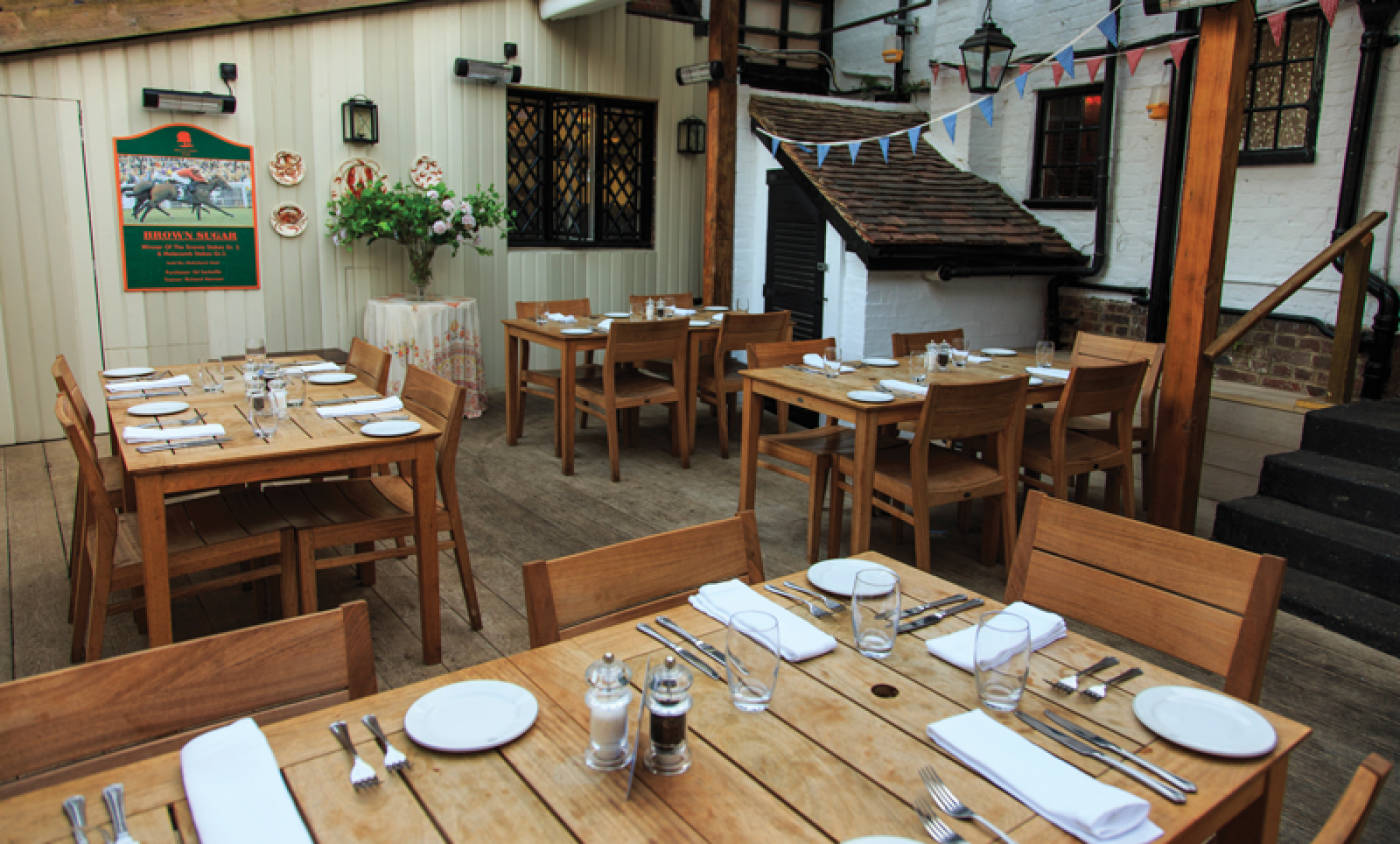 The kitchen really comes up with the goods and is a major draw, with eggs, sausages and organic beef sourced from the Buckhurst Estate next door. Starters include Scotch egg with mustard mayonnaise (made to the Earl’s own recipe), followed by mains of calves’ liver and bacon with wholegrain mustard mash and balsamic jus; or (when in season) venison burger with blue cheese and pommes frites. Finish off with a classic English pudding like apple and rhubarb crumble and cream.

The care and expertise that goes into the menu focuses on quality food prepared from local and seasonal produce. It’s rare to find a pub that does everything so well and carries it off without a hitch. A personal recommendation is the pan seared Sea Bass on saffron and chorizo risotto – Chef Nick Bailey fried the skin to a filo-like crispness, yet retained the succulence of the white flesh. 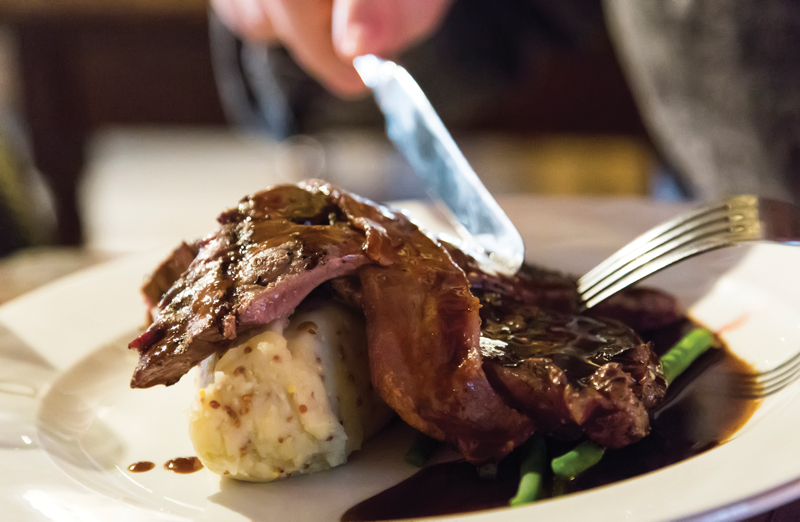 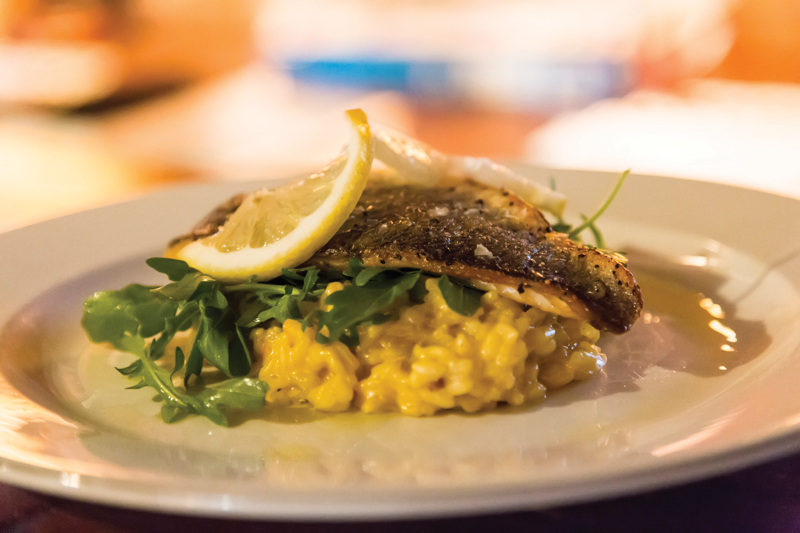 For al fresco dining, there are benches to the front of the pub and a secluded raised garden to the side, complete with summer barbecue, bar and food serving area. Alternatively, the heated Garden Room (which has a retractable roof) works well for family gatherings.

Head Chef Simon Brazier (whose attained recognition for the Dorset Arms in the Good Food Guide 2016 and Top 10 in Best Dining Experience in Sussex 2016) says, where possible, his produce is locally sourced, and being part of the Buckhurst Estate means his eggs and most of his meats come from them.

“For vegetables, we use Groombridge Asparagus and other local vegetable suppliers. If they deliver good, sustainable produce, we’ll use them. Of course, the last word is that of Lord De La Warr, who tastes all our dishes – he’s is a keen foodie.”

“The most popular starter on the menu is our Scotch egg with mustard mayonnaise. We soft boil the Buckhurst Estate farm egg for six minutes, refresh then peal. Then we wrap Buckhurst Blue sausage meat evenly round each egg. It’s then dipped in flour, then egg, then panko breadcrumb. The egg is then deep fried for eight minutes, chopped in half and served on a salad garnish with small pot of inhouse mixed mayo mustard.”

“But my favourite of all is our signature dish, Venison Wellington, served with creamy mash and savoy cabbage and finished with red currant jus. It’s always well received.”

I asked Chef Simon about beer and wine pairing his menu: ​“Picpoul de Pinet pairs perfectly with our whole lemon sole, samphire, brown shrimp butter and frites. The Argentinian Malbec pairs well with the calves’ liver and bacon with whole grain mustard mash, and balsamic jus. The pork tenderloin with Spring onion and potato rosti and Groombridge asparagus is best with a cold pint of Aspalls Harry Sparrow Cider. And for dessert, you can’t go wrong with a glass of Bluebell Vineyards English Sparkling Classic Cuvee or Rose – who are based near Uckfield – with our Strawberry Pavlova.”

Inspired by the inventiveness and science behind Heston Blumenthal’s dishes, Chef Simon stays on trend by reading about what’s new in the food scene, using ingredients that are popular and speaking with regulars about what they would like to see on the menu – and Lord De La Warr of course. He’s especially keen on Kentish raspberries and strawberries, Groombridge Asparagus and local game from the estate brought in weekly by the game keeper. 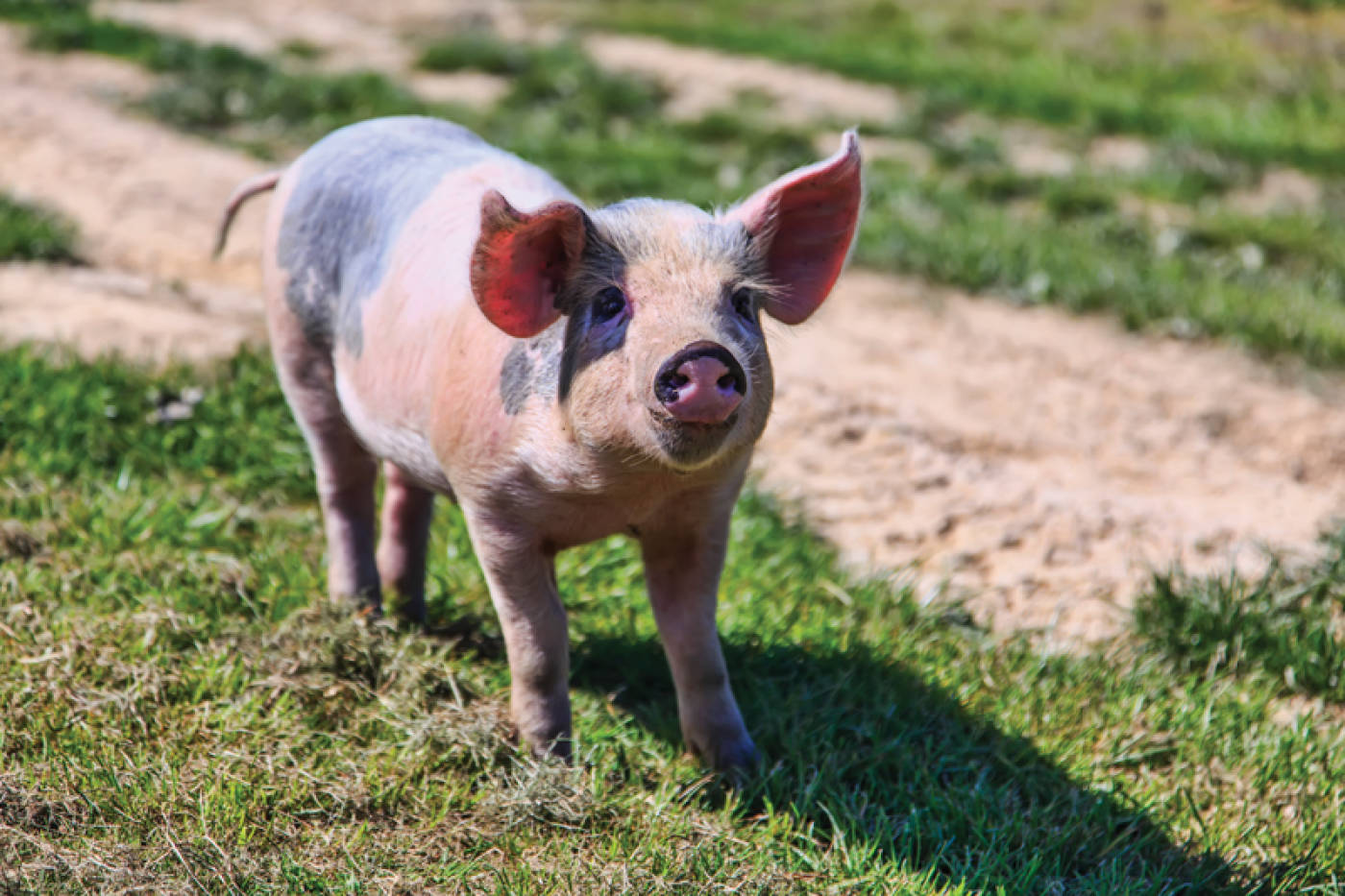 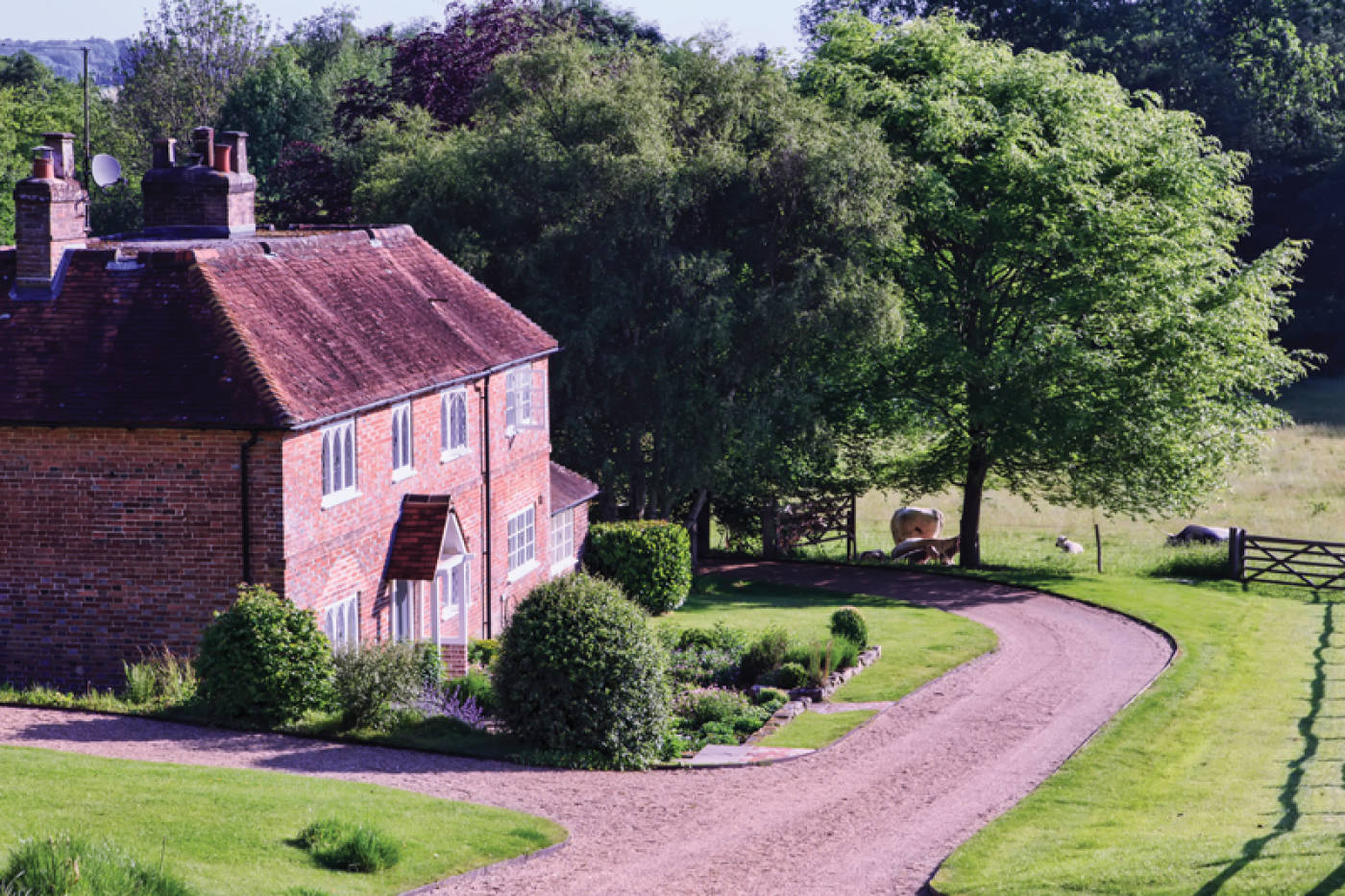 What Chef Simon and his team deliver is local food that’s full of honesty and freshness, and comes from places that haven’t been messed about with, so the food remains unspoilt. From farm to fork, food cart to fine porcelain, the Dorset Arms is the very cradle of local and seasonal food, a little temple of great food and ambience.
www​.dorset​-arm​.co​.uk

Sleep
Ideally located directly behind the Dorset Arms, is the Grade II listed ​“Old School Cottage” with six en-suite bedrooms, some with long view across Buckhurst Estate, but all uniquely designed with comfort in mind. Room rates start at £105 and includes a Buckhurst breakfast (ask after Lord De La Warr’s special recipe scrambled eggs). Their legendary herby sausages are made by the estate and its ingredients are known only to Lord de la Warr and a trusted few, but are available to purchase from ​“Nick the Butcher” in Withyham.

Buckhurst Estate
The estate and family is one of the oldest in Britain, dating back by nearly a thousand years, to before the Norman Conquest. As such, the history of the estate and its inhabitants would fill many books, but it is the workings today which are perhaps of most relevance.
Buckhurst Estate is very much a working one and prides itself on its environmental credentials, participating in a multitude of stewardship schemes which fit in well with the organic management of the estate. Alongside organic arable cropping there’s also a heard of British Longhorns; a pedigree organic Sussex cattle herd has been established, in addition to the organic Large Black pigs. There is also a pedigree Sussex beef herd and Countess De La Warr’s small flock of sheep, which graze the parkland. Lady De La Warr breeds pedigree Shetland ponies that are the oldest registered Shetlands in the world.

The Estate hosts numerous outdoor pursuits including pheasant shoots, fishing and clay pigeon shooting, as well as coarse fishing and deer stalking. It’s an ideal location for weddings and corporate events – even filming. Previously shot movies at Buckhurst Park include episodes of ​‘Doctor Who’ and ​‘Great House Cookery’. 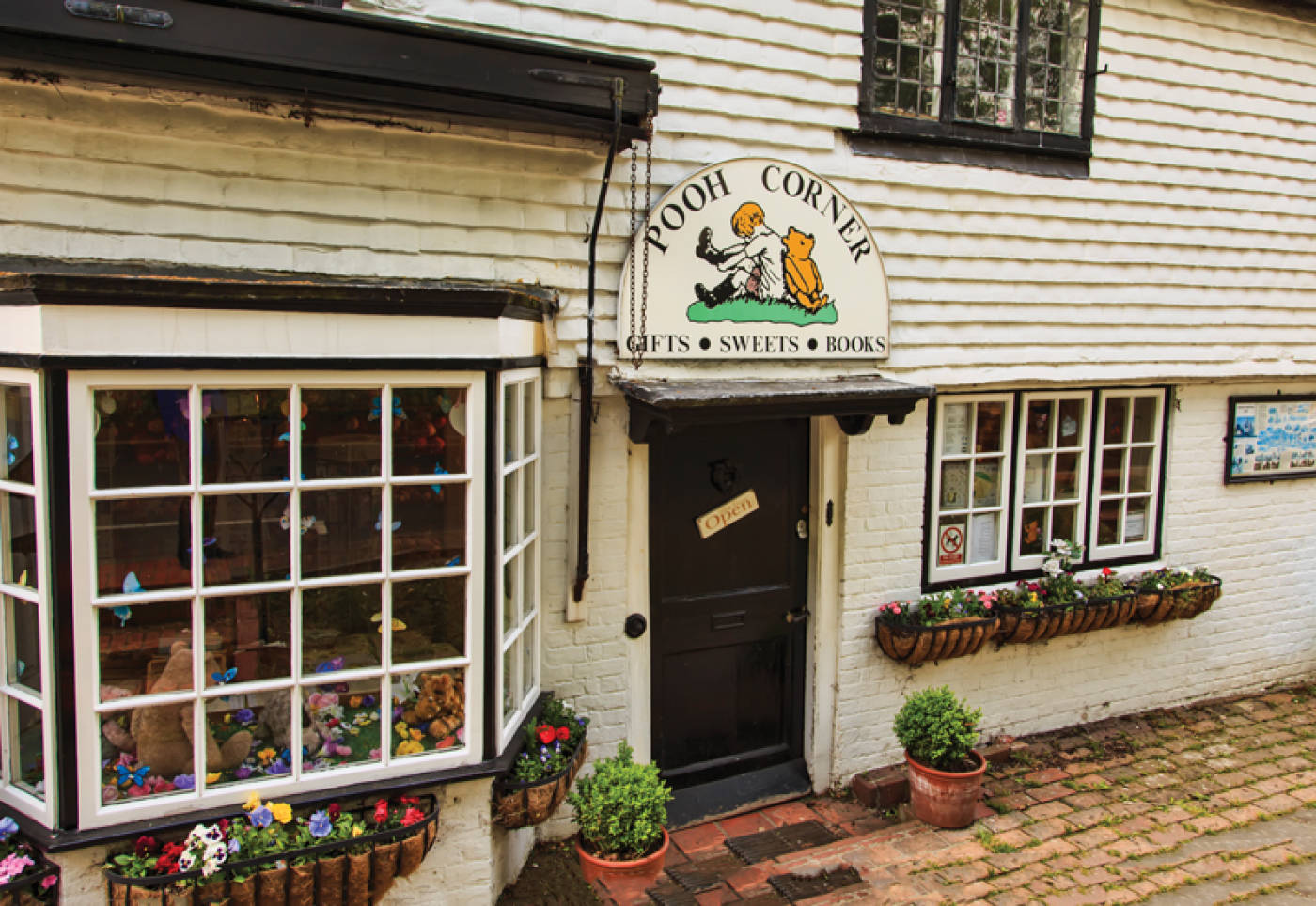 Winnie the Pooh
Within the Buckhurst Park estate is the ​“hundred-acre wood,” an area that was separated from Ashdown Forest in 1678. The author A.A. Milne, who lived nearby at Cotchford Farm in Hartfield, made the Hundred Acre Wood famous as the setting of the Winnie the Pooh stories.

The building was bought as a country home by Milne in 1925 who was inspired by the local landscape. There are statues of Milne’s son, Christopher Robin, and his character Owl in the garden, also a sundial with a gnomon in the shape of a quill and a base carved with images of Pooh characters, together with the initials AAM, and the words ​“This warm and sunny spot belongs to Pooh, and here he wonders what it’s time to do”. A stream runs through trees along the southern boundary of the garden, with Poohsticks Bridge about half a mile upstream.

Stop for tea, and honey, at Pooh Corner, on the High Street in Hartfield.

For other equally fine pubs and inns throughout the UK, see innplaces​.co​.uk