Paarl – the pearl of the Boland

A 40-minute drive outside Cape Town, at the foot of the second-largest granite outcrop in the world, you’ll find an unexpected jewel: the scenic town of Paarl, a place brimming with Cape Dutch, Victorian and Art Deco architecture, country hospitality, but more importantly, world-class wine estates – respected amongst wine connoisseurs the world over.

From large international wine companies to the smallest ​‘garage’ wine, Paarl’s winemakers produce a range and different styles of wine – rich full-bodied, spicy reds to crispy whites – all with a sense of place. 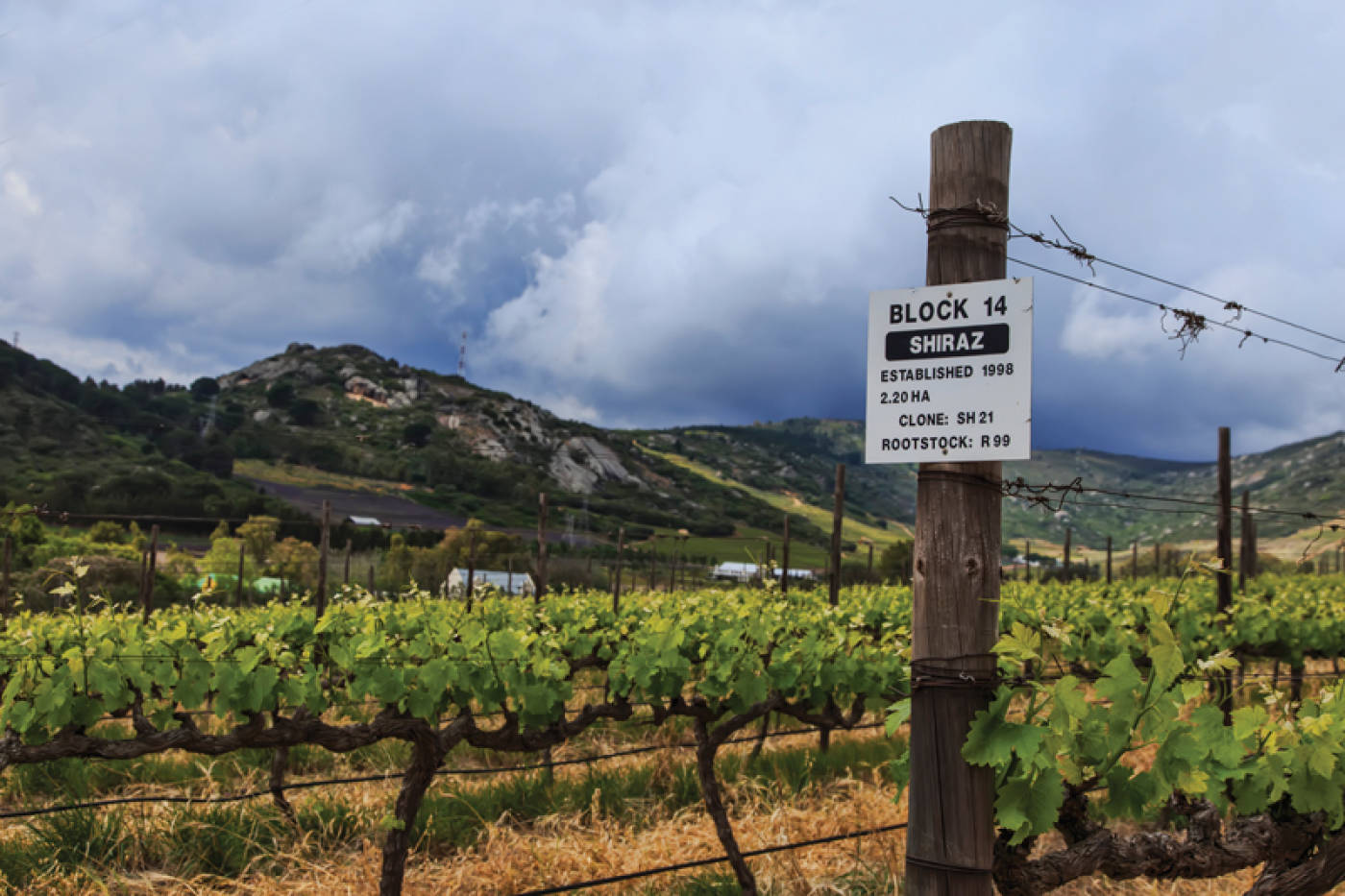 Ridgeback
There’s a back story to Ridgeback Wines, a 62-hectare working wine farm hunched over by the Limietberg Mountains. In 1997 Vernon Cole, an ex-Zimbabwean tobacco farmer, acquired what was a fruit farm running at a loss. He uprooted the orchard, sought some advice from a friend and planted vines.

Says Cole: ​“In many ways not having experience in growing wine grapes was a blessing as we sought expert advice which, as the vineyard developed, served the farm well.” He recruited a then newly qualified viticulturist and wine maker, Toit Wessels, who went onto win the estate several national and international awards.

Showing me around the vineyard, which is interspersed with olive trees, Wessels explained the Ridgeback trademark. ​“Deciding on a brand name identifiable with the Cole’s family history in Zimbabwe was easy – their farm dog, a Rhodesian Ridgeback. It’s a breed with strong ties to southern Africa’s pioneering history where legends and stories speak of their exploits and bravery in the bushveld, of their tenacity and ruggedness which are symbolic of the spirit of Africa. We strive to reflect this in our boutique wines.”

The vineyard itself is a natural conservation site. The Cole’s have embraced the natural heritage of the region, joining forces with the Department of Wildlife and Conservation, ensuring the protection of the native flora and fauna.

“This area is famous for its granite soil,” says Wessels, ​“resulting in a terroir that helps us annually produce around 200,000 bottles of Ridgeback, as well as our second label, Vansha.

The wine tasting is a tranquil affair, set against the backdrop of a lagoon, complete with birdlife. Sitting on the terrace of the Deck Restaurant, which juts out over the water, a large cheese and meat platter appear, as does the Merlot, Shiraz, Chenin and a rather splendid Viognier – rich, round and friendly and is best summed up as South Africa in a glass. www​.ridge​back​wines​.co​.za 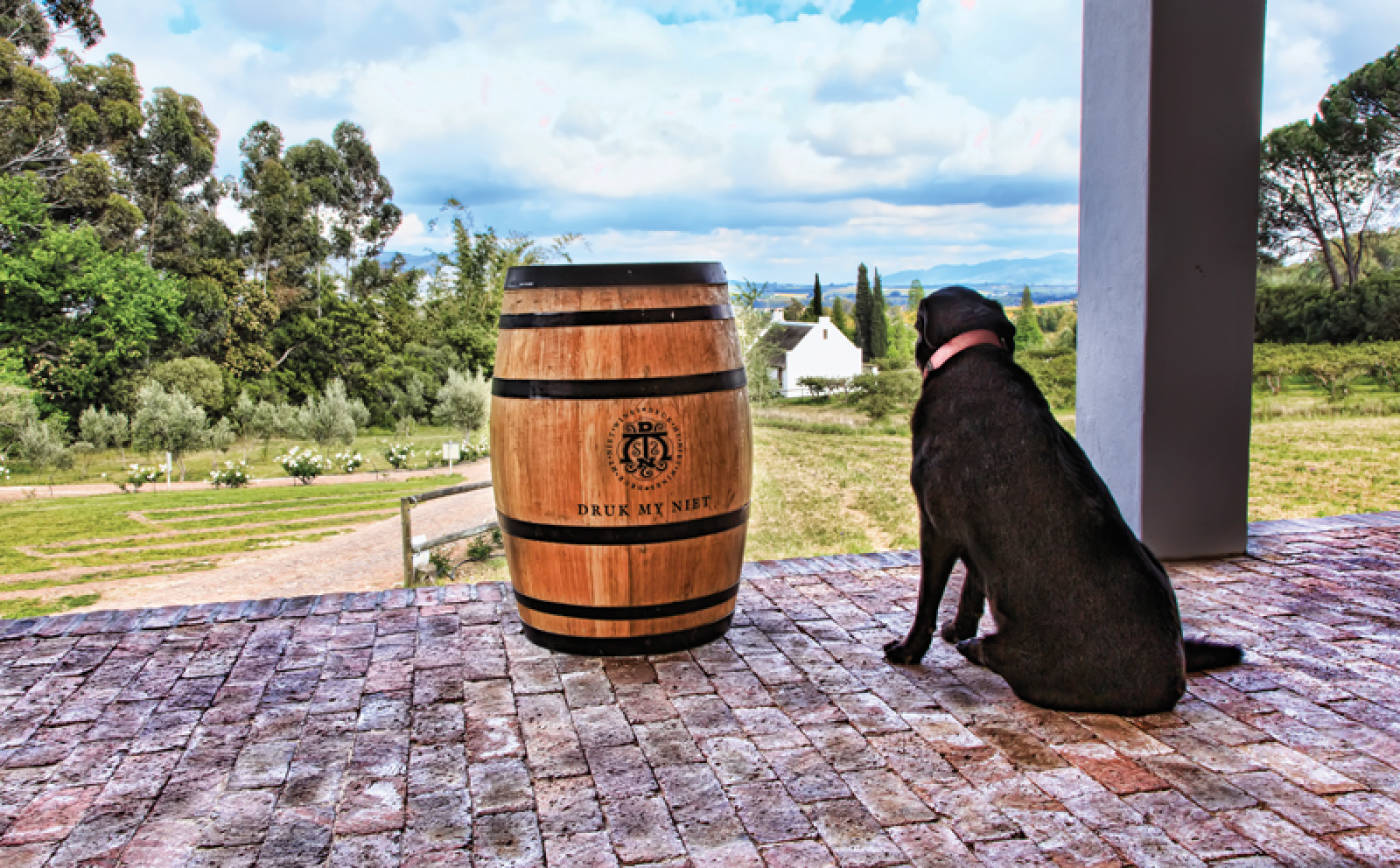 Druk My Niet
Amongst the endangered fynbos and protea bushes, you’ll find Georg and Dorothee Kirchner on the Druk My Niet estate, a 24-hectare boutique winery. Whilst living in Hong Kong they visited an Australian vineyard and, as wine enthusiasts, this gave them the notion of throwing in the corporate towel and becoming wine farmers. Since the acquisition of the Druk My Niet estate in 2002, the +350-year old Manor House has been sympathetically restored and the fruit orchard replanted, returning it to red vines, using only sustainable farming methods (they’re proud members of the Biodiversity Initiative). 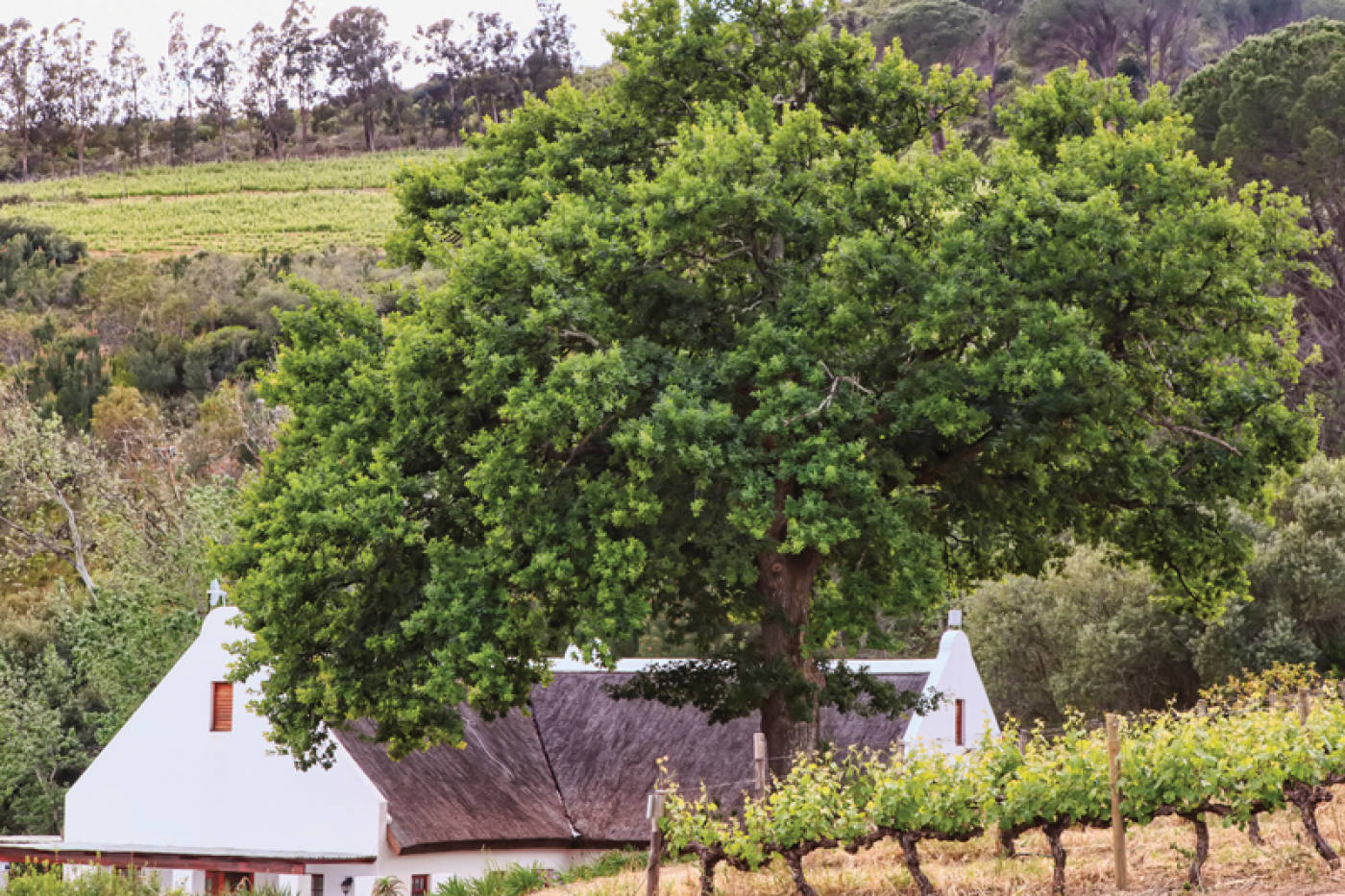 Dorothee spoke of Druk My Niet’s recently created boutique Cheesery, showcasing a range of artisan goats’ cheeses. ​“We started with a small herd of five Swiss Saanen goats and have now grown the herd to twenty-two and produce outstanding Camembert, Pecorino and Chèvre from organic milk. We milk the goats the old-school method and leave kids with their nanny’s which makes for happy, relaxed goats which in turn means better milk.”

Says Georg: ​“When we tasted our first wine in 2008, we got more than we expected, which is why we allow the grapes to ripen at their own pace. Thanks to our wine maker we’ll soon be producing around 30,000 bottles for our 400-year old cellar.” Sampling a Chenin, a Cabernet Sauvignon, a Shiraz and several blends, Georg tells that a tasting could take several hours, which it did and I salute every one of their six award winning wines. www​.dmn​wines​.co​.za 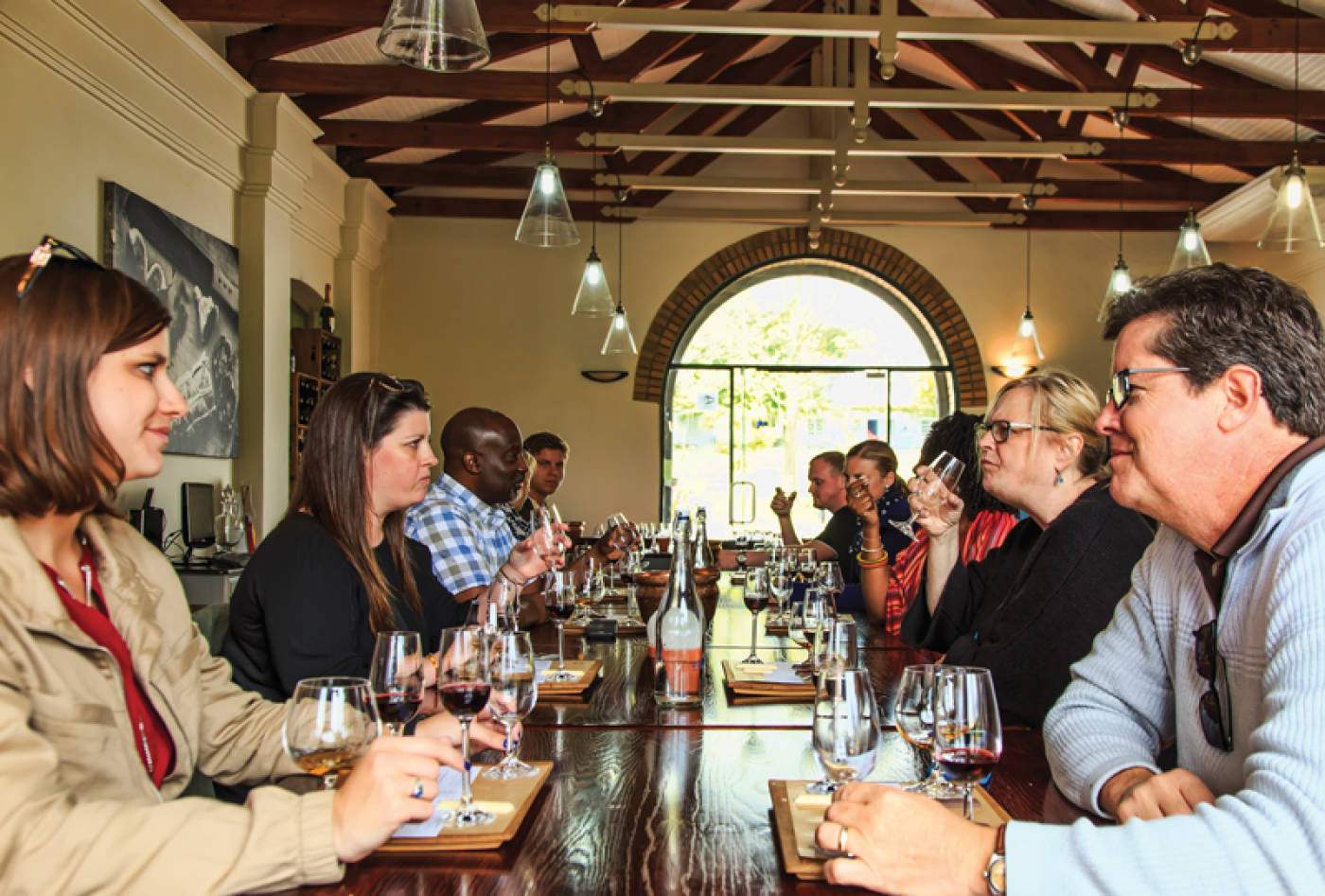 Laborie
Sitting at the base of Paarl’s granite rock is the historic French Huguenot vineyard of Laborie – one of the country’s oldest wine farms. They’ve been producing Méthode Cap Classique sparkling wines as well as white, red and fortified Pinotage dessert wines for more than 300-years.

At their renovated ​‘Taste at Laborie’ tasting room, I look through their pairing menu options – olives, charcuterie, cheesecake, chocolate. Kids aren’t left out as they too get to join in with their own grape juice and sweetie tasting experience – complete with a colour-in book and a jungle-gym in a picture-postcard setting. 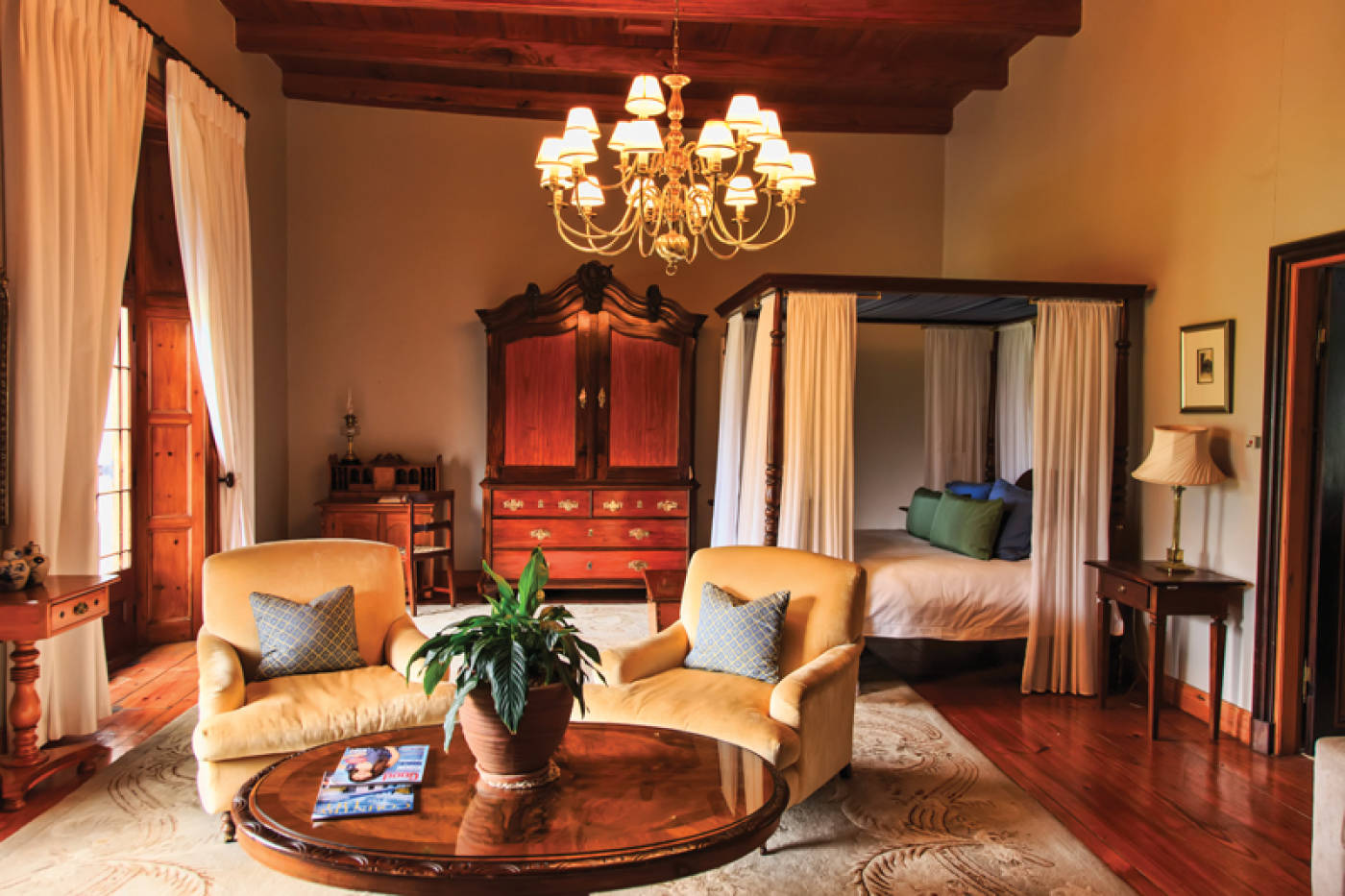 Sitting on the veranda, with the Drakensberg Mountains at my back, surrounded by vineyards and shaded by ancient oaks, Laborie’s Franciska Pienaar explains: ​“We’re focused primarily on Pinot Noir and Chardonnay but in total produce twenty different wines from 59-hectares of land – 31 of which are under vine.”

Popping an assortment of olives into my mouth I sampled Laborie’s Méthode Cap Classique Blanc de Blancs 2010; Rose 2014; Chardonnay 2015; Cabernet Sauvignon 2015; Shiraz 2013 and finally their Pineau – all the while Franciska relays the story of each outstanding wine. It’s difficult not to taste the passion and skill that’s been passed down the generations. laboriewines​.co​.za 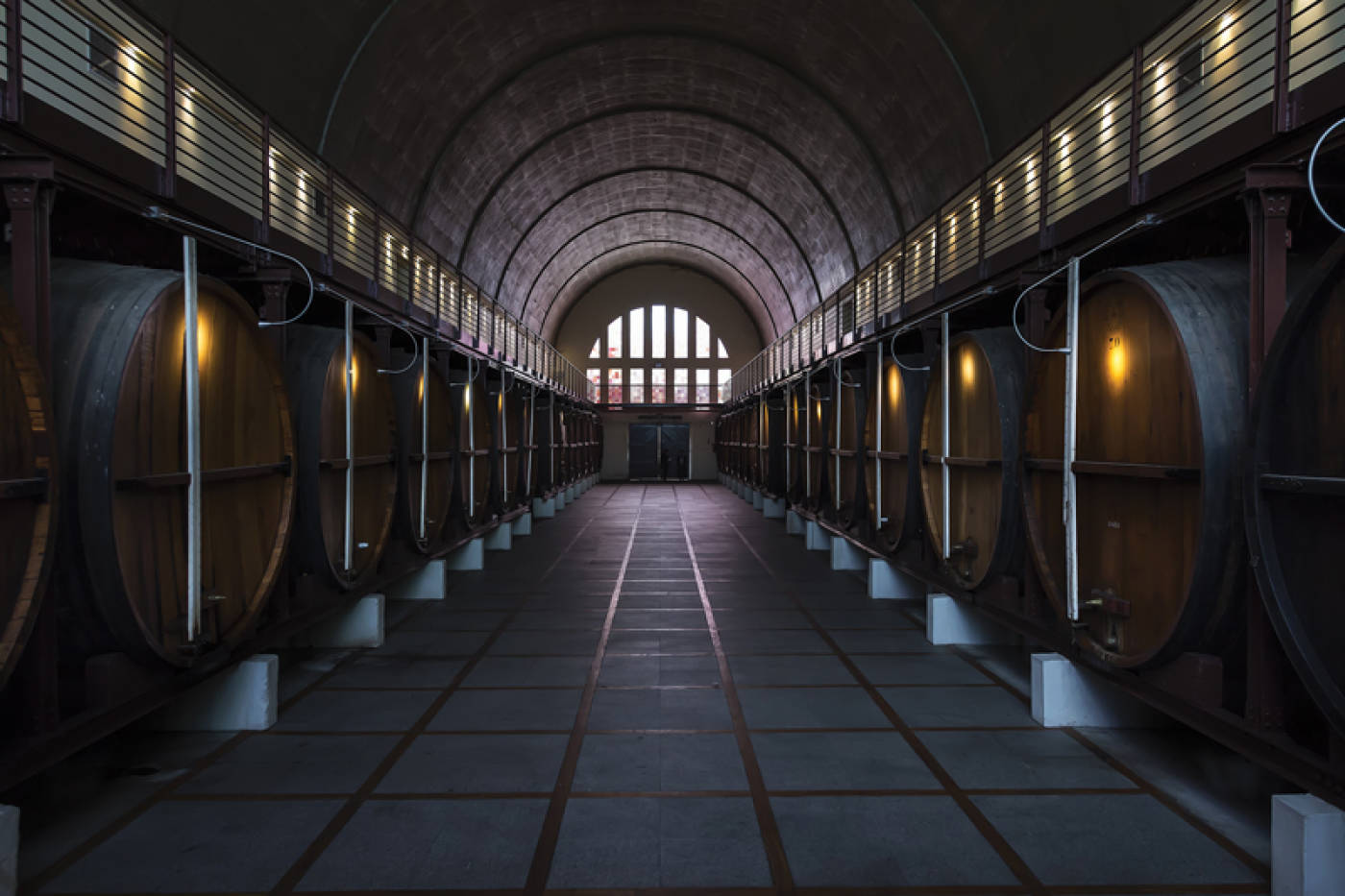 KWV Brandy Tasting
No trip to the Cape vineyards is complete without a visit to the KWV Wine Emporium – for a brandy and chocolate tasting. ​“Tasting the rich decadence of a good brandy is one thing, seeing where it’s made makes it more interesting,” says Millicent Moss of KWV Wine Emporium. ​“But pairing brandy with handcrafted Belgian chocolate is something else altogether!”

I’m presented with four shot of brandy and four chocolates. The pairing, I’m told, will educate my palate as the hand-crafted chocolate will disclose the spice and cinnamon notes found in the brandy. 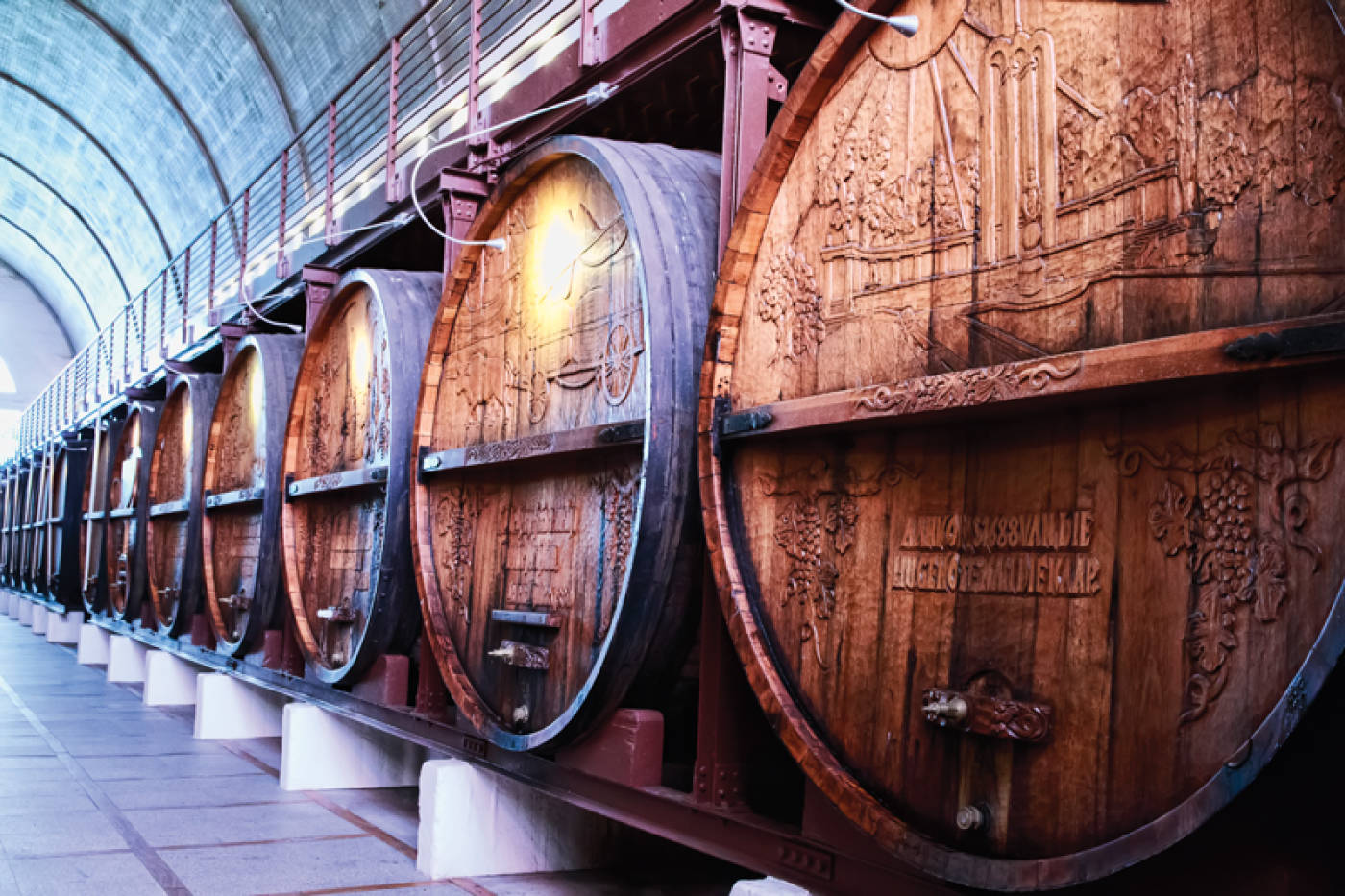 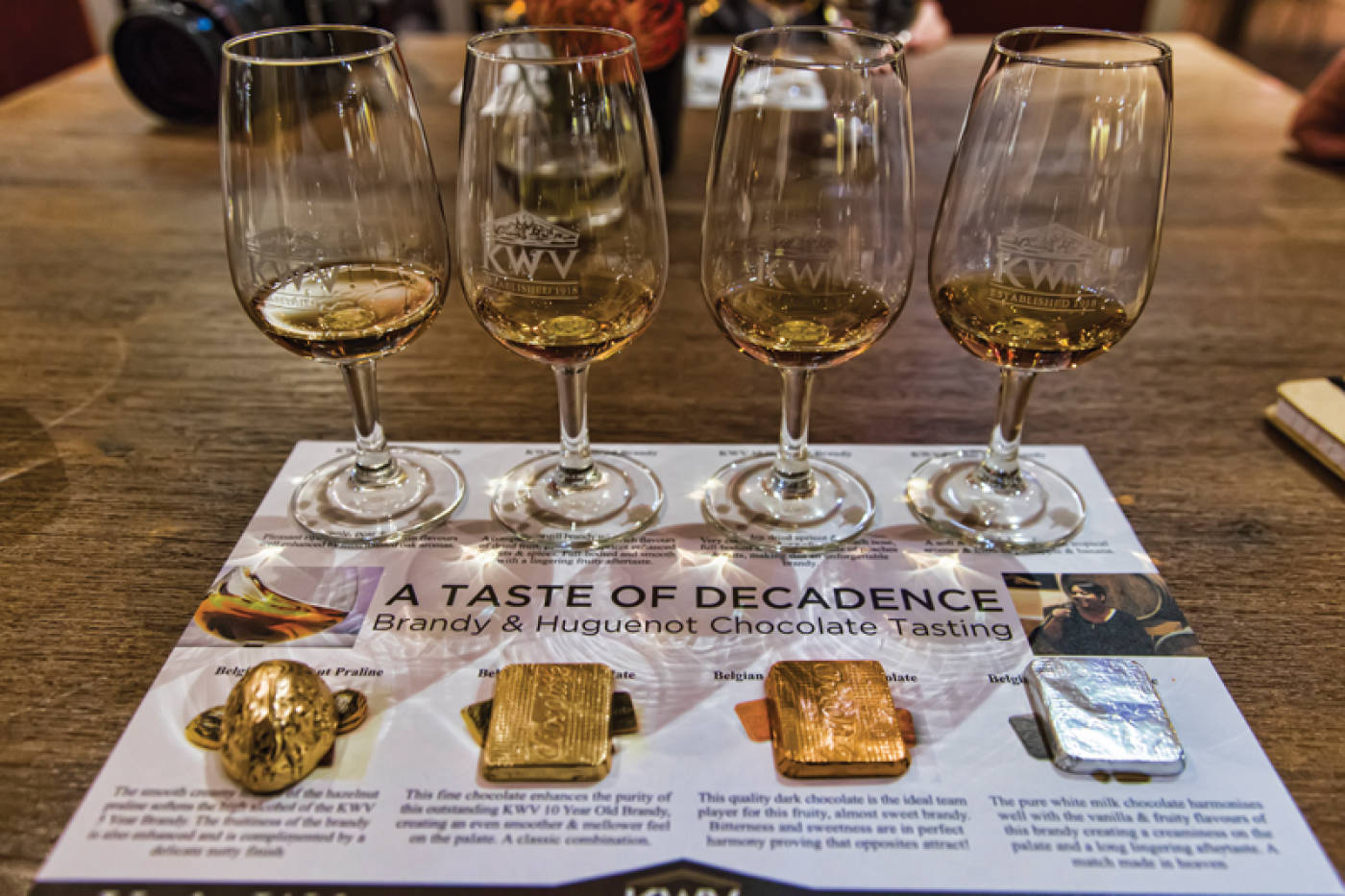 Whether you’re a casual wine drinker, a brandy connoisseur, or a teetotaller, you’ll find what you’re looking for when visiting South Africa’s Route 62

Checking in
Elegantly leaning into the slope of Paarl Mountain, surrounded by 360-degree panoramas that have left me breathless, I look out across the working winelands of the Grande Roche Hotel. This idyllic oasis appears as if it’s been especially tailor-made to escape, but of course this is not the case. Here the seamless combination of heritage and rustic charm is how this centuries’ old Cape Dutch manor house has always been. Now of course, it’s been complimented by first-world creature comforts. 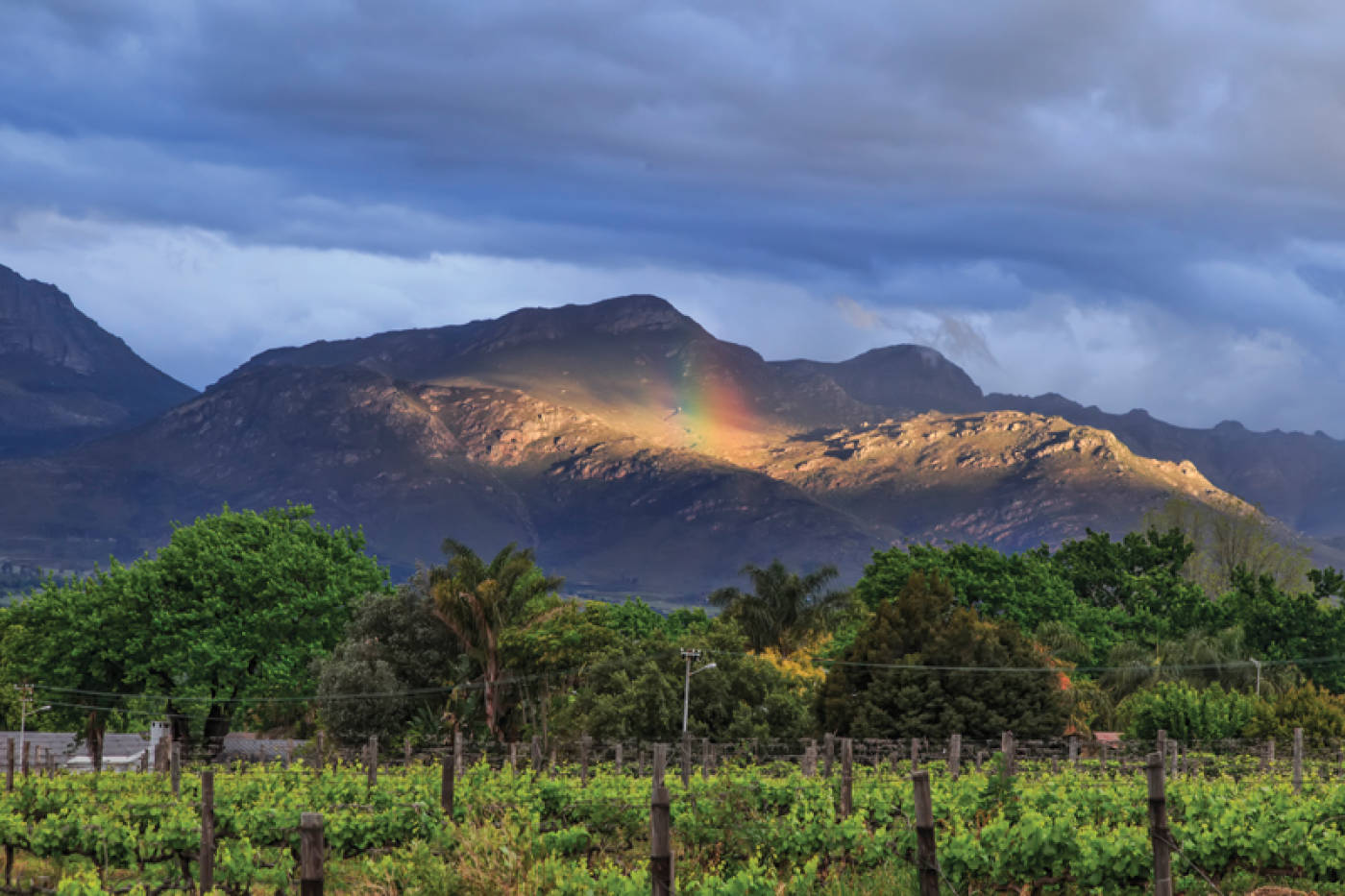 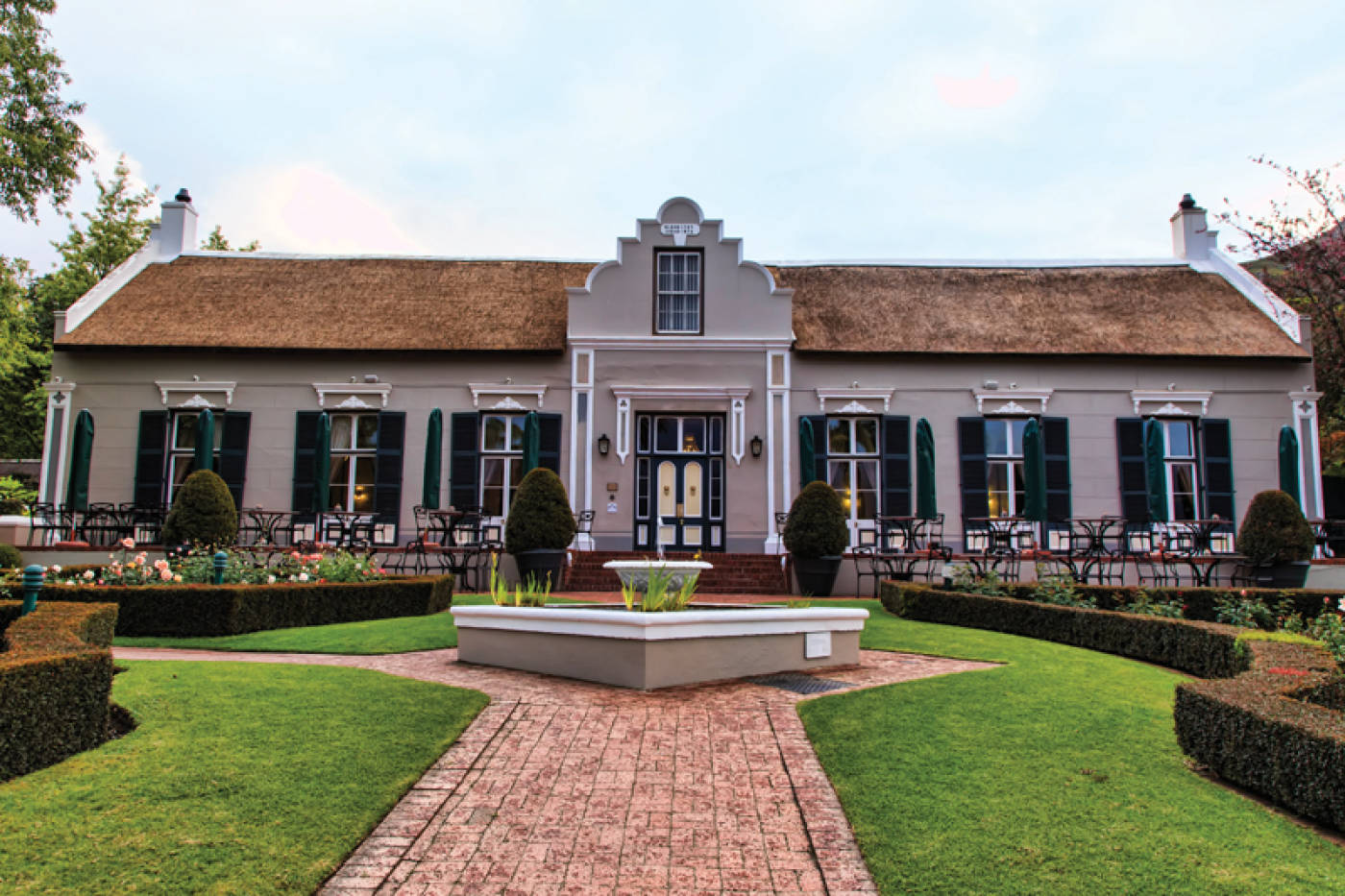 All the outbuildings – stables, tack rooms, a granary and cellar – set amongst abundant gardens filled with fruit trees and culinary herbs, have all been sensitively converted into 35 suites, studios and terraced cottages, complete with a 14-metre long swimming pool, a gym and holistic spa.

Dinner at Bosman’s Restaurant adds another layer to the experience; I soon experience why they’ve been named as one of the top 100 restaurants in the world. Michelin-trained Austrian chef, Roland Gorgosilich, blew me away with his melt-in-the-mouth oven roast ostrich fillet – it was love at first bite. 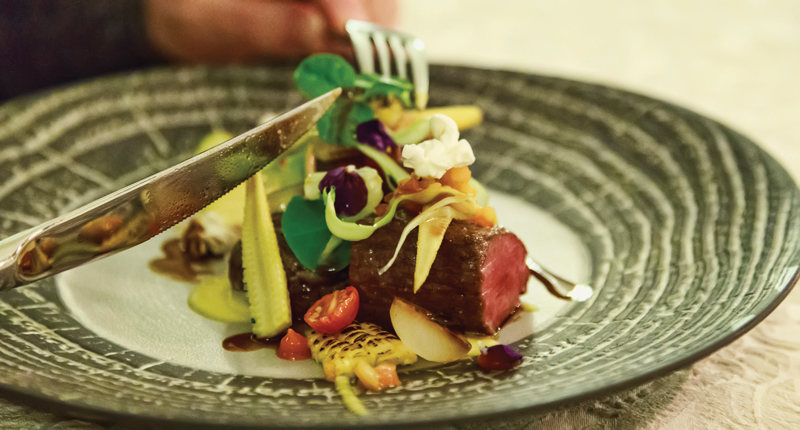 The Grande Roche is a proud member of Small Luxury Hotels of the World. B&B room rates start at ZAR2,810.
grande​roche​.com