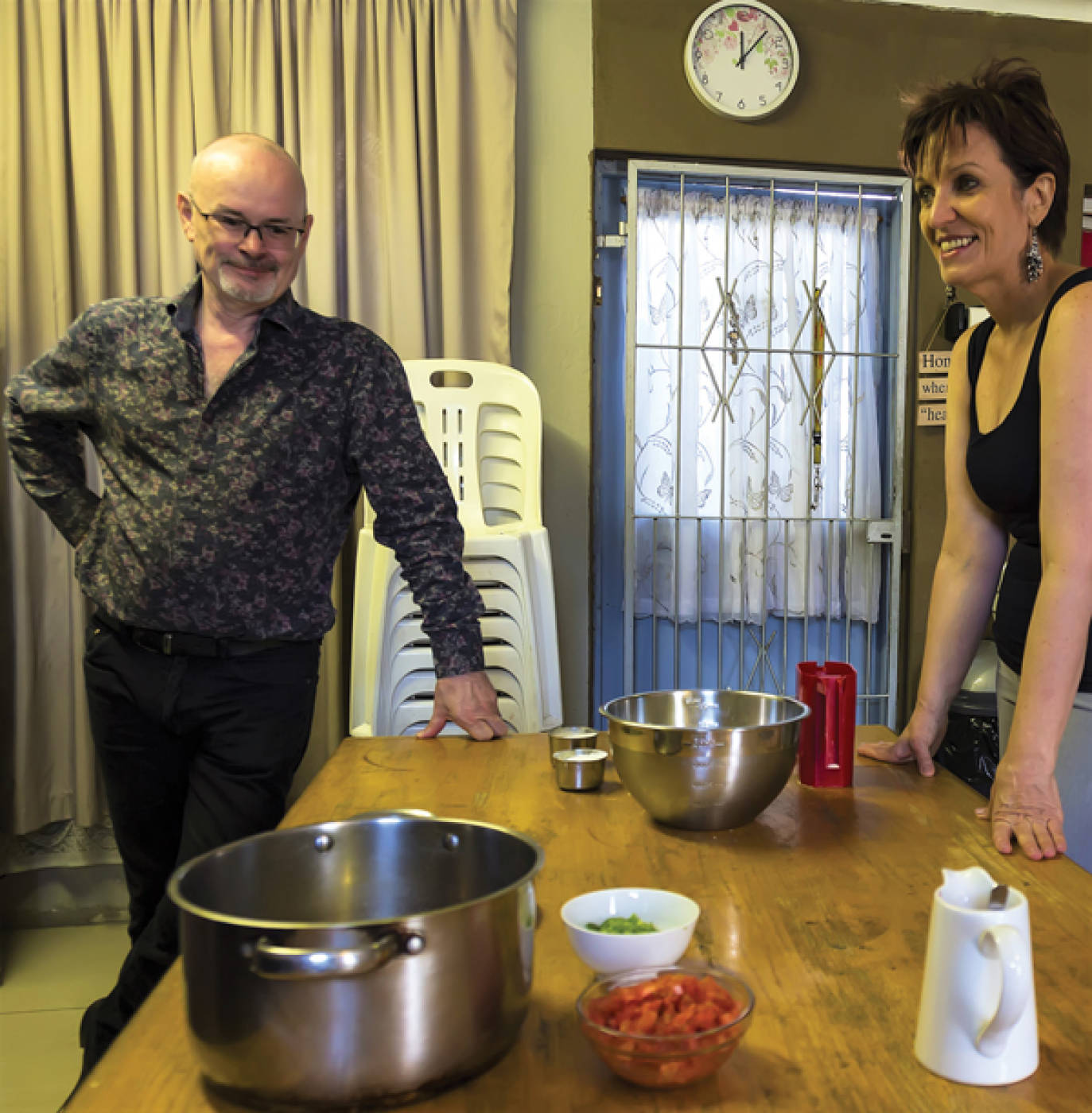 Cooking in the Bo-Kaap

In a country that has so often been described in terms of black and white, it’s nice to see a splash of colour

Slouched against the slope of Lion’s Head and looking down at Cape Town’s city centre, lies the historic area of Bo-Kaap. Just a mere two kilometres long and half a kilometre wide, the 600 houses and 300 apartments form a visual and mesmerising kaleidoscope. 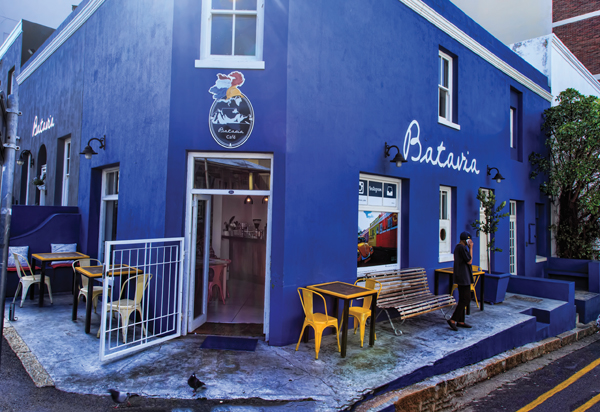 The quaint cobbled streets lead to jellybean coloured houses. A lime green façade thinks nothing of flanking fuchsia pink, electric blue or sunflower yellow. Nor does baby pink care much about clashing with a turquoise or orange neighbour. Some of the doorways are crumbling, as are many of the walls, but this somehow adds a romantic hue to the Dutch and Georgian styled homes – all an appropriate mirror of the hybrid, mostly Muslim, community who live here; a people whose favourite pastime is stoep-sitting.

Service alleys make irregular criss-cross patterns around the houses, carrying with them footprints from days when secrets were smuggled, political plots were hatched and when neighbours sent out little parcels of food during religious celebrations.

Looking to the 16th and 17th centuries, the original formation of Bo-Kaap sees the Dutch East India company sending traders by ship to seek their fortune in both the spice and slave trade. All nationalities came, many accompanied by political exiles, farmers and tradesmen from the Middle East, the Malay Archipelago, Indonesia, Ceylon and India. Tradesmen like carpenters, builders and tailors were particularly necessary for the new settlers and today many of the Bo-Kaap residents still follow the same professions as their forbearers. 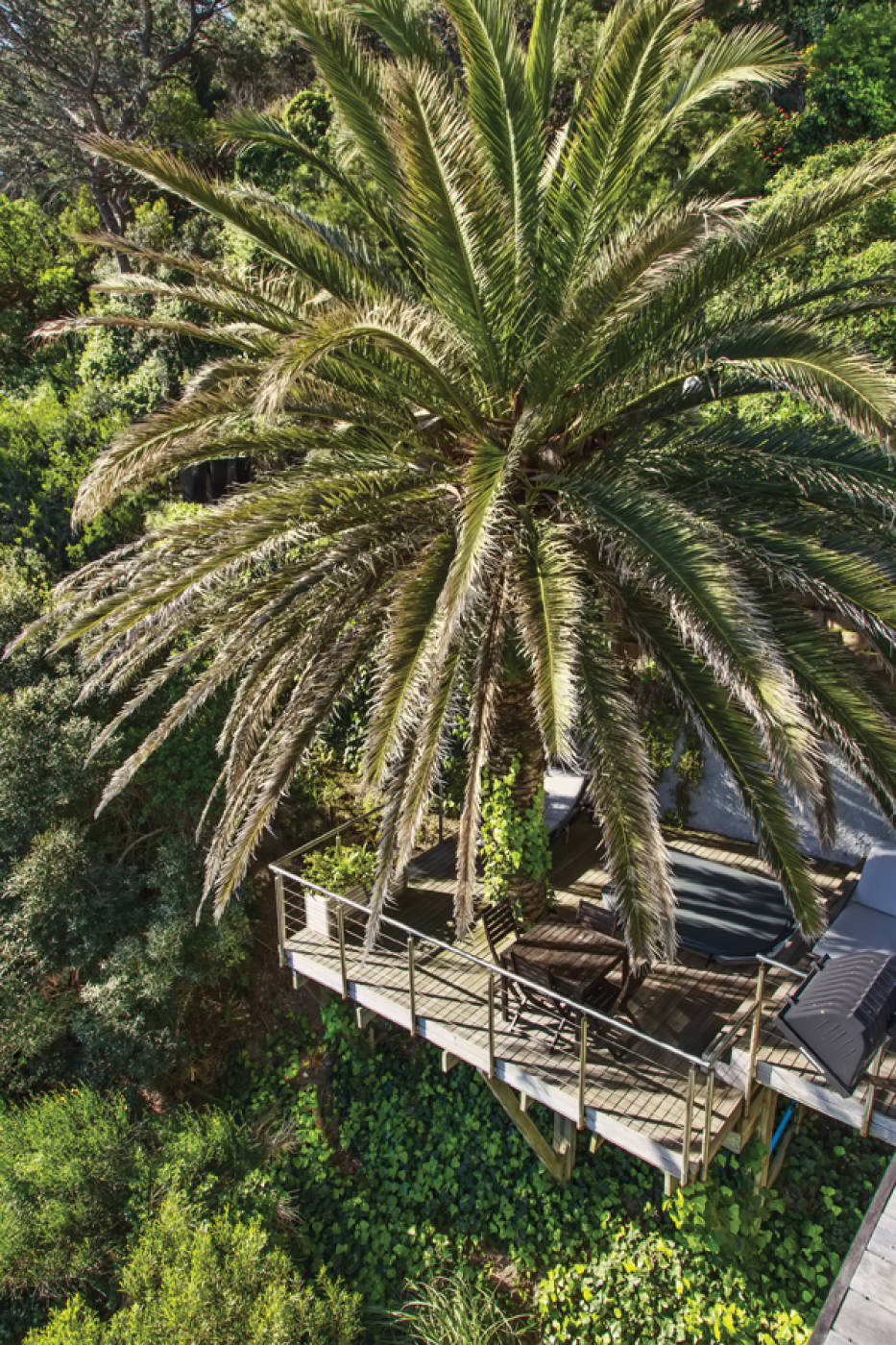 This deep history and rich culture brought with it a diverse collection of people who turned the Bo-Kaap into a cauldron of cultural influences. Street names often revealing clues to the diversity of those who lived there. Rose Street is named after British settlers. Chiappini Street was owned by Italians, Sacks Street, a Jewish family and Pentz by Scotsmen.

There’s a sensation of being in another world and time. The Bo-Kaap starkly contrasts with the inner-city just a few streets below – buildings are different, people are different, as is the feeling on the streets. It’s a close-knit community, hung heavy with the aromas of exotic cooking spices and pungent incense, the call to prayer emanates from the mosque – it’s all entwined with a complex history and vibrantly colours. 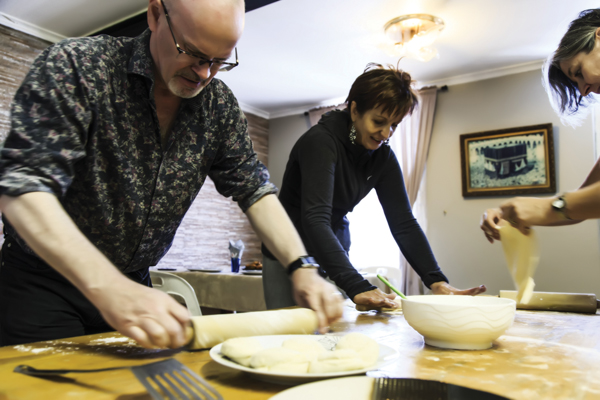 There is no masterplan to it; there’s no strategy of pattern. It’s the homeowners who decide to do this and they choose their own colour and paint it themselves. But the rainbow streets are just the façade. The real vibrancy, the real colour, the real boldness is on the other side of the doors, which is where I met the flamboyant cook – Faldela Tolker.

Faldela, who’s lived here for more than 30 years, has spent most of her adult life learning to perfect Cape Malay cuisine – a culinary fusion of European dishes and eastern spices. It is said she holds the secret to some of the Bo-Kaap’s most cherished recipes. 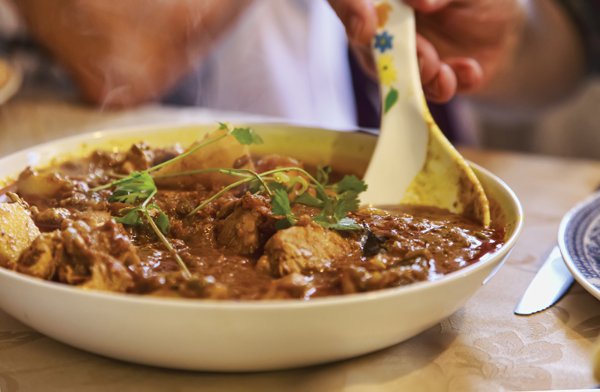 She runs a cooking class from her purple Bo-Kaap (Wale St) home and has been teaching aspiring cooks and tourists for longer than she cares to admit. I’m invited to join one of her cooking classes: a voyage into Bo-Kaap life and food – a hands-on, practical lesson on how to cook like a real Cape Malay ​‘Auntie’, learning how to expertly fold Samosas and prepare a perfect roti.

A small group of us were immediately put to work in her kitchen, creating our first Cape Malay lunch. We weren’t sure what was on the menu that day, but the kitchen already smelled of a thousand spices. We all had jobs during the class, some stirred a bubbling pan on the stove whilst others were rolling dough. As a group, we came together to make roti (a chapatti-type flat bread) and samosas (crispy fried pastry with a savoury filling). Faldela’s gentle ribbing when we made mistakes were badges we all wore with pride. The aromas of Cape Malay cooking wafted through the house; by now we were all ravenously hungry. 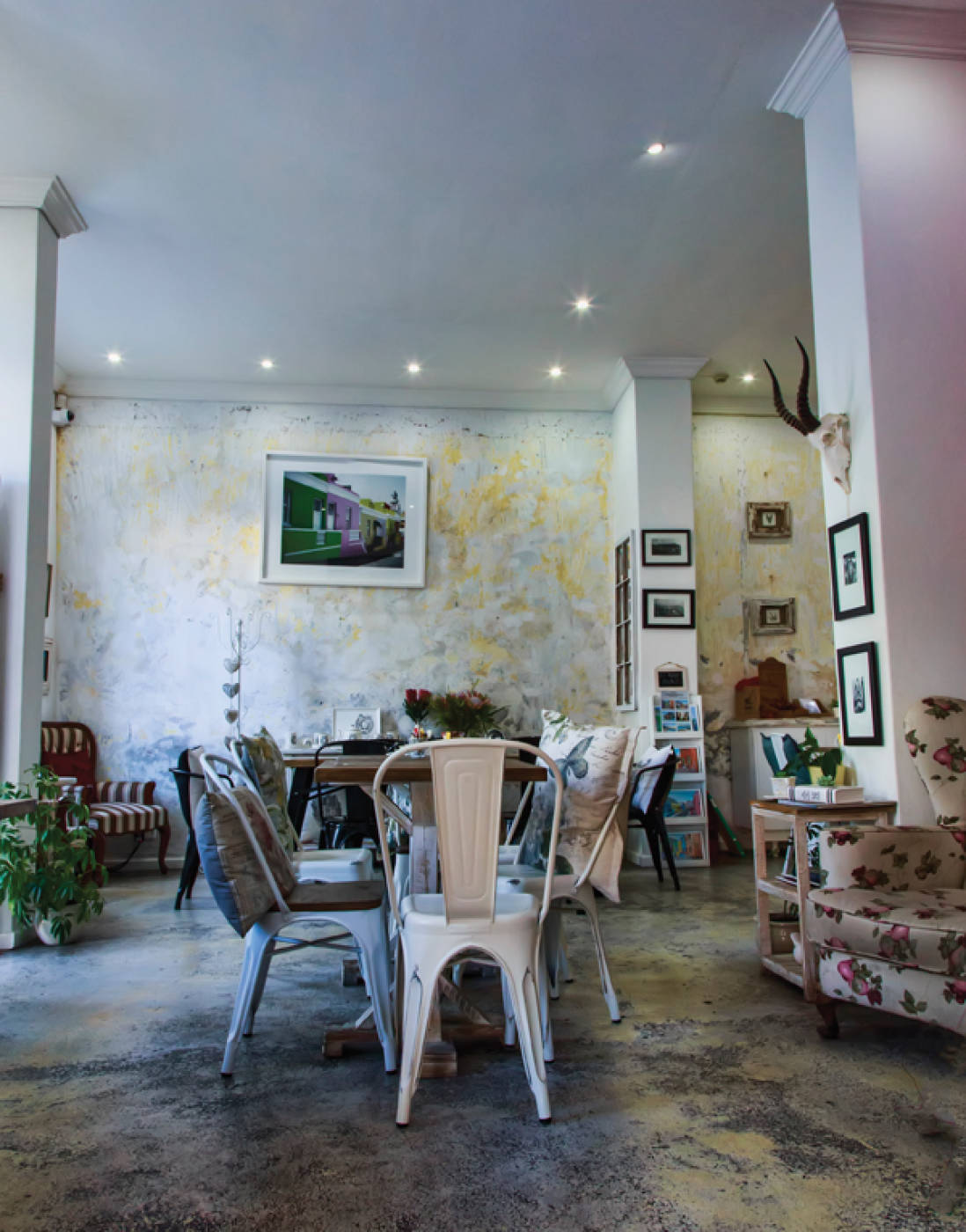 Soon we sat down to a delicious lunch of strangely misshapen samosas. Some were filled with chicken and corn, others with spinach and feta. Then came the main course – a heaped bowl of chicken curry and a dinner plate of roti’s. Faldela demonstrated its assembly by spreading a heaped tablespoon of the curry mixture along the centre of the flatbread, then rolling it up like a pancake, folding in the ends (this is where my love affair begins). For dessert we’re served tea and koeksisters – a traditional Malay sticky, spicy doughnut affair. 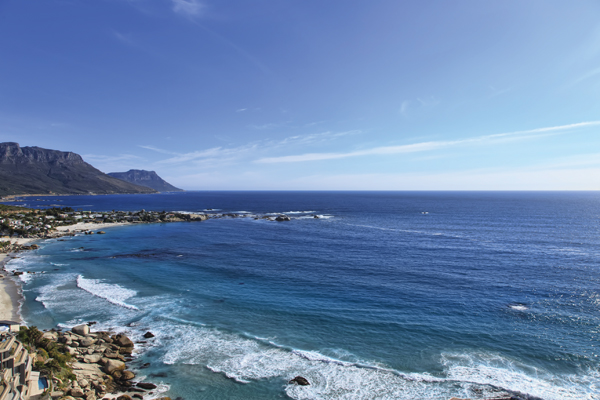 Somewhere nearby I could hear the Imam announcing an imminent ceremony; outside school kids on their way home, were laughing and calling out to one another. More than just learn about food we learned about our host, her family and neighbourhood and ultimately about the history. In a short space of time, and through the simple act of rolling dough and attempting to fold samosas. Find Faldela Tolker ​‘Cooking with love’ on Facebook.
For gourmet Eggs Benedict in the Bo-Kaap, look in at Batavia’s (114 Church St) – a cobalt blue, culturally rich, lifestyle café – a stone’s throw from Faldela’s home. Inside are wooden tables, multi-coloured chairs, a magazine rack, bunches of flowers, comfy couches and a section of jewellery and artwork. www.facebook.com.bataviacafe

Checking in:
Clifton, an exclusive residential area of Cape Town and home to some of the most expensive real estate on the continent, has a seaside hideaway that’s a closely guarded secret by those in the know. Cape View is a quiet, intimate property. It’s contemporary colonial styling is cocooned between the magnificent Twelve Apostle mountain and the south Atlantic Ocean. All five deluxe suites, and two fully equipped two- and three-bedroom family suites, with original artwork and photography that depicts the story of Africa, are spacious and sea-facing, each opening onto a private balcony with uninterrupted sea views. They’re individually styled in soothing shades of white and pebble grey or soft teal and pistachio – there’s even a pillow menu. Creating a gracious home environment, breakfast here is sumptuous. It’s a near family affair with a global mix of travellers enjoying the leisurely boutique guest-house vibe that soon draws everyone out onto the pool deck, only to be mesmerised by the ever-changing sea view. www​.cape​view​clifton​.co​.za

When to go:
Just one sleep is all it takes to get to Cape Town: a 12-hour overnight flight and at the end of it, no jet lag. Avoid the tourist influx during December and January, when accommodation is expensive and hard to find, and stay clear of the gales from September to November.