From sticky toffee pudding and gastro pubs, to farmers markets and heritage meat farms, our editor Cindy-Lou Dale rekindles our national love-affair with Cumbria, seeking out purveyors of fine food and taste-testing her way across the Lake District.

If you’re an inquisitive cook you’ll no doubt like exploring new tastes which is why you need to begin your Cumbrian Food Trail at the Cartmel Village Shop – an artisan handmade pudding company and home of Cartmel Sticky Toffee Pudding. Simon Johns makes no claim to creating the original Sticky Toffee Pudding but assures me it’s one of the best out there. The story goes that hotelier Francis Coulson of the Sharrow Bay on Ullswater borrowed the original recipe from a Mrs Martin in Lancashire. To avoid confusion Coulson tweaked the recipe and renamed the updated version Icky-Sticky Toffee Sponge, which in turn created a Sharrow Bay following, drawing visitors from around the world. It was later learnt that Mrs Martin actually got her recipe from a Canadian friend. Says Simon: ​“The sheer beauty of our pudding requires it to be eaten unadorned. No nuts or slivers of peel, no shavings of chocolate or splashes of brandy – just lavish amounts of sauce. Cartmel Sticky Toffee Pudding needs no embellishments.” www​.cart​melvil​lageshop​.co​.uk 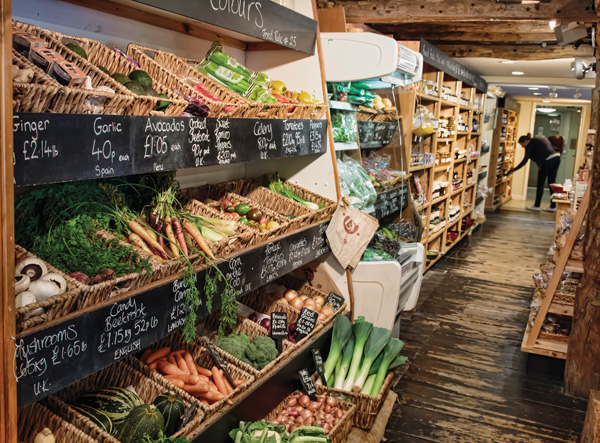 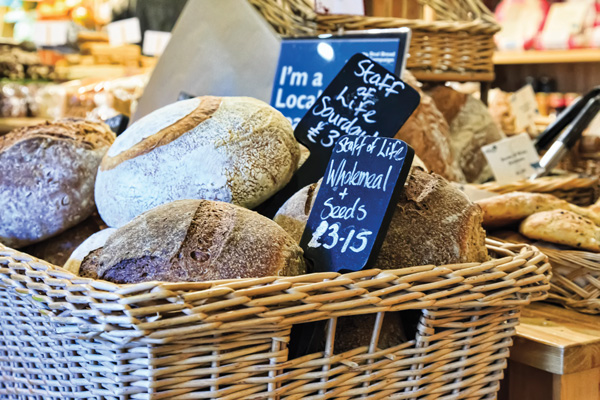 Make your next port of call Low Sizergh Barn, a working farm deli in Kendal. The farm shop, contained in a 17th century barn, is an assault on the senses – aromas of freshly baked bread, sweet potatoes, wood smoke and ginger cake. It’s the shop-window to every day staples and great foodie finds created by talented local artisans. Upstairs in the tearoom there’s a huge window overlooking the milking parlour. Be sure you’re seated with a cheese scone and tea no later than 3.15pm to watch the pampered cows being milked. Alison Park spoke about Low Sizergh’s role in the local food chain: ​“In many ways our being rooted in our community for the past three generations extends further than our conventional farm shop. What we care about as a farming family is doing everything well – caring for the landscape, caring for the animals, looking after our environment. When taking a self-guided walk along our farm trail everyone can see what farming practices we implement. They’ll see, when walking through the fields and woods, what we’re doing on the farm and how we’re doing it. They’ll also see healthy, well cared for animals.” www​.low​siz​ergh​barn​.co​.uk 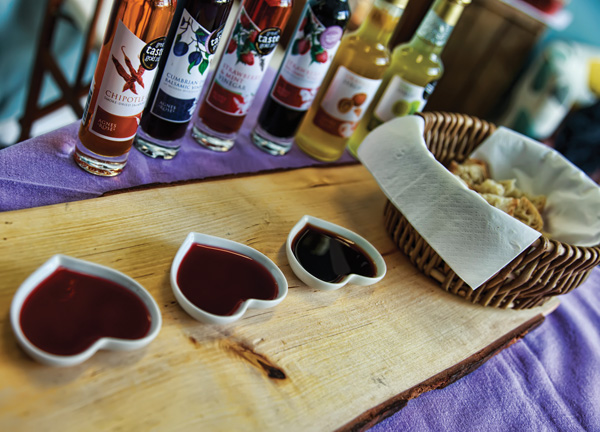 Nearby is Naomi Darbishire of Agnes Rose who took the speciality food sector by storm when she introduced the culinary concept of adding fruit vinegars, fruit syrups and infused oils to food. From an early age Naomi would forage in the hedgerows surrounding her Cumbrian childhood home, then she’d spend hours watching, tasting and learning in her mother and grandmother’s kitchens. ​“Anything I could pick myself,” says Naomi, ​“then create something from it was sheer magic to me.” She decided to take her love of cooking and turn it into a career. At first she foraged in the same hedgerows then, in her mother’s kitchen, began developing her range – everything made by hand to an old family recipe. I enquired after examples of incorporating vinegar into everyday cooking. ​“Add a couple of tablespoons of blackberry vinegar to garlic and onion soup,” Naomi suggested. ​“And when baking a camembert or goats cheese, pierce the top skin a few times and drizzle in a tablespoon of fruit vinegar; and to cheer up a fruit cake add three tablespoons of Damson vinegar; and don’t forget to use vinegar to deglaze a pan.” www​.agnes​rose​.co​.uk 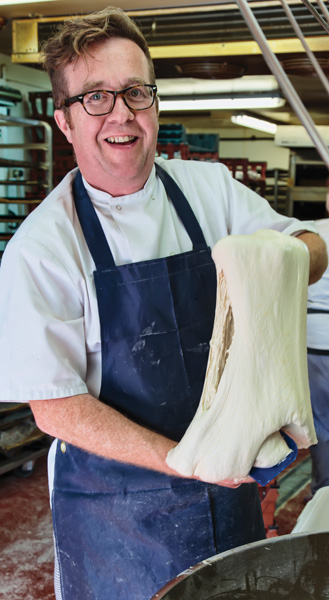 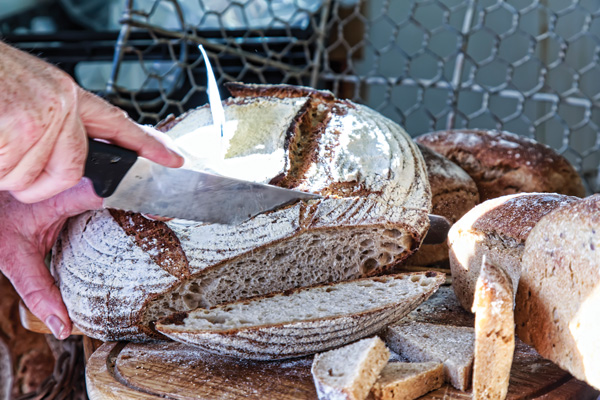 To sample unique varieties of irresistible breads made with special oils and herbs, courgettes, pumpkins and tomatoes visit Aidan Monks’ Lovingly Artisan Bakers. ​“Sharing food is one of the greatest joys of living, whether it’s a celebratory feast or passing someone a loaf of bread,” announced Aidan. ​“There’s no better way of connecting with people and understanding their culture than through their food. I’ve always been inspired by good food which is why, when completing my scholarship at Boston College of Culinary Arts in the USA, I returned to Kendal to open my own artisan bakery. My approach to artisan bread-making is continental in style, with a wholesome northern vibe.” Aidan is passionate about his baker’s world, finding inspiration at farmers’ markets, quality food retailers, even his own vegetable garden. ​“All that I produce is based on simple bread disciplines and excellent flour – organic heritage grains from Gilchesters Organics being my chosen source. The grains are lovingly grown and stone ground in Northumberland. This basic ingredient transforms my ability to produce beautiful bread.” www​.lov​ingl​yarti​san​.com 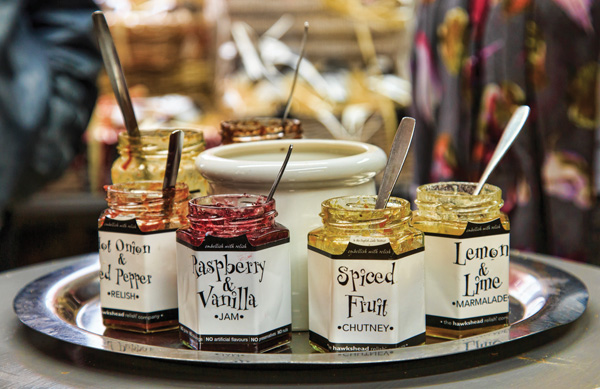 In the picture postcard village of Hawkshead I met Mark and Maria Whitehead in a little shop where Hawkshead Relish first began. ​“We started our relish business out of pure desperation,” says Maria. ​“Whilst running a restaurant we found it near impossible to source good condiments,” added Mark, ​“so we started making our own.” Just south of Hawkshead, in their beautifully restored 16th century barn, Mark creates small batches of pickles, preserves and relishes by hand in traditional open pans. Now the restaurant has morphed into a shop which showcases their range. I picked up a jar of salted caramel sauce and asked Maria what it would accompany. ​“That you’d drizzle over a baked chocolate brownie, on ice cream or over popcorn – and it’s terrific when spooned into porridge. And the beetroot and horseradish chutney, you’d want to try that with poached salmon. The red onion marmalade goes wonderfully with Cumberland sausage.” www​.hawk​shead​rel​ish​.com 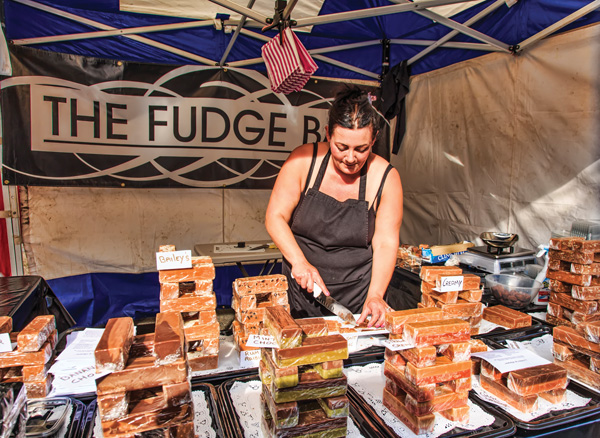 At the Taste Cumbria Food Festival in Cockermouth I came across people in the act of creating food – a coffee roasting demo by Carvetii, a red wine cooking demonstration, ice cream swirling into cones and folk queuing to sample homemade lemon cheesecake fudge created by Sherelle at her Fudge Bar stand. Shoppers browse amongst dozens of colourful stalls selling local produce – cheeses, bread, chocolate, cider and mulled wine – rich with aromas of ginger and cloves. This is where I met Clare Warrall of Furness Fish & Game, famed for their Carmel Valley Crab, Whisky and Honey Smoked Salmon and of course, their Potted Shrimps. I asked Clare how best to serve the shrimps. ​“Traditionalists insist it be warmed through so the butter seeps onto wholemeal toast; others say serve it as canapes with smoked salmon. Personally I love it stirred in with Tagliatelle.” www​.taste​cum​bria​.com 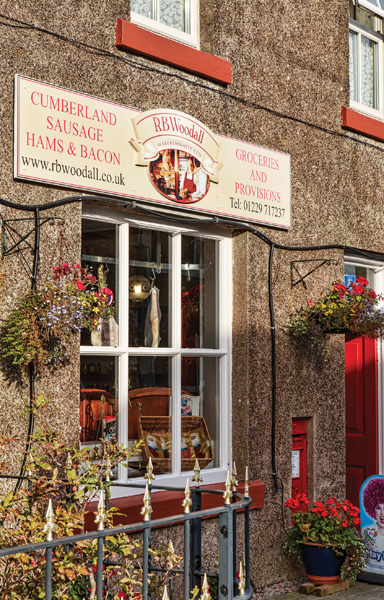 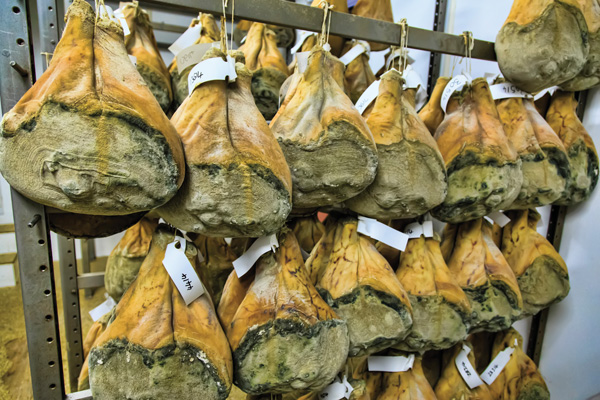 At a nearby stall I met the team from R.B. Woodall (Waberthwaite), a family run butchers and purveyors of Cumbria’s celebrated air dried hams, bacon and smoked sausages. ​“We’re been using the same recipes and techniques since 1828,” says Alistair Woodall, who went on to explain the traditional process his hams undergo. ​“I select only the best hams from my supplier in Wigton – those with plenty of fat. I trim them to shape, lay them in a bed of salt to cure and turn them every 10 days. A month later the salt is washed off and the hams hung to dry for at least a year, allowing the meat to mature to premium quality.” R.B. Woodall operates from a Victorian shop in the village of Waberthwaite. They hold a Royal Warrant and supply Balmoral Castle with their pork requirements when HRH is in residence. www​.rbwoodall​.com 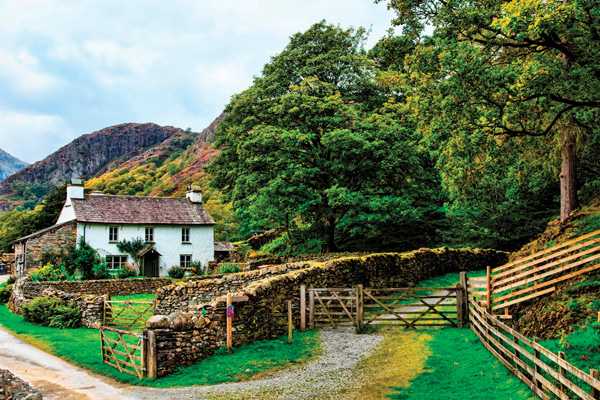 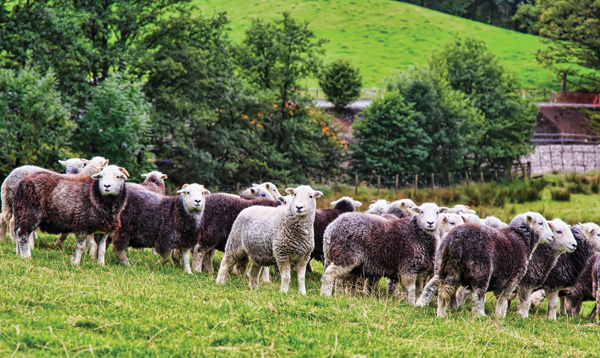 Driving by hedgerows, country churches, stone barns, verges brimming with nodding wildflowers and sheep roaming over windswept fells, my GPS delivered me to Yew Tree Farm – a 700 acre working National Trust farm in the Yewdale Valley, once owned by Beatrix Potter. There was an aroma of freshly tilled warm-smelling soil in the yard where I met Tenant Farmer Jon Watson who explained why he chose specific breeds to develop his heritage meat range: ​“Herdwick ewes and wooly Belted Galloway cows are built to withstand mountainous conditions – it’s in their DNA.” His slow-growing sheep are raised to hogget age and his cows till they’re about three year old. ​“Most rare breeds benefit from being left for that extra year – the meat is stronger, sweeter and more succulent.” I observed Jon’s personal attachment to the land and all that roamed on it whilst he tended his sheep – moving a poorly ewe from a distant flock to a pasture closer to the farmhouse, just so he could keep an eye on her. www​.her​itage​meats​.co​.uk

An old South African saying came to mind, about farmers being the authors of civilization; that cultivating the soil is a vital labour of man and that when the spadework begins, other arts will follow. For further information about Cumbria see www​.golakes​.co​.uk 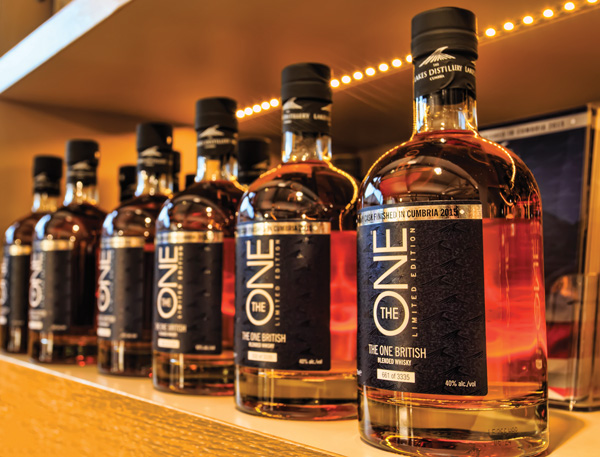 The Lakes Distillery near Bassenthwaite has a bistro, set in a former Victorian cattle parlour, ranked as one of the top twenty in the UK. Their courgette and goat’s cheese lasagne is full of flavour. To go, ask after four handmade Lakes gin and lemon truffles. Be sure to do the distillery tour before leaving. www​.bistroatthedis​tillery​.com 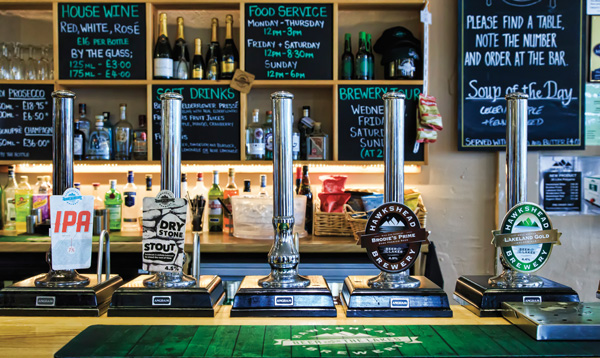 The Hawkshead Brewery in Staveley do a terrific beer tapas menu – try their Brody’s Prime with a plate of Bury black pudding or the pit-smoked sausage made with beef, pork, jalapenos alongside a Windermere Pale. www​.hawk​shead​brew​ery​.co​.uk 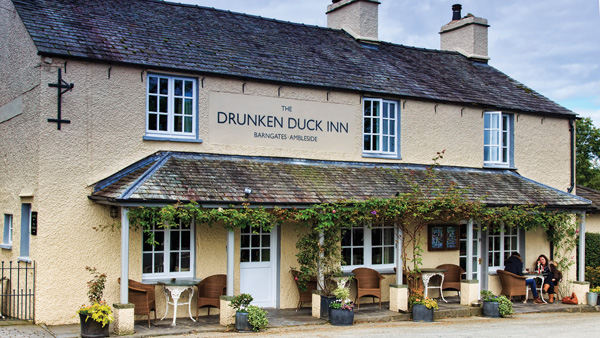 Near Ambleside is the Drunken Duck, a cosy upscale inn and restaurant with a welcoming fireplace and a micro-brewed (on-site) beer-tasting menu. Here I learnt that good eating depends solely on the finest of ingredients, simply cooked. They also have several plush rooms, some with balconies, others with patios, all with views and private bathrooms.
www​.drunk​en​duck​inn​.co​.uk 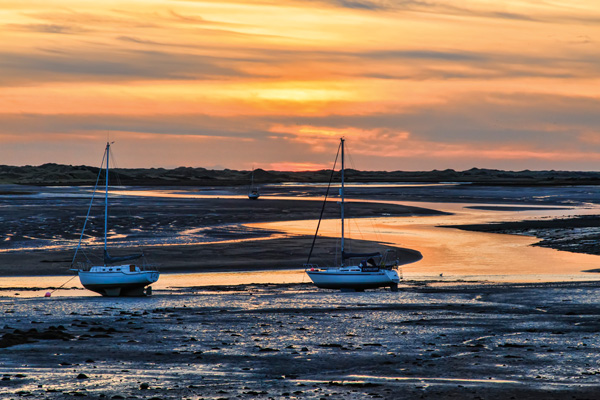 Deciding to go off route I head towards Waberthwaite and spend a night in Ravenglass, the Lake District’s only coastal village. I stop outside the 17th century Inn at Ravensglass which, Google assured me, contained two luxury suites. Goes to show that outward appearance can be deceptive as my immense suite was terrific – complete with a breath-taking sea view. All that ocean at the feet of the nearby Pennington Hotel hasn’t gone to waste if my excellent fish in Cumbrian beer batter was anything to go by. Had I stayed an additional night I’d have dined at the Inn at Ravensglass – I was told their seafood to be quite something. www​.thein​na​tra​ven​glass​.co​.uk