Amsterdam is changing rapidly – the landscape, the population, the standards, the tastes. Yet there are places where time stands still, like the artisan food stores in the once squalid ghetto of The Jordaan district. There is a sense of theatre to the place, with every street corner showcasing its own production of traditional food. It’s as if food is woven into the fabric of the area. 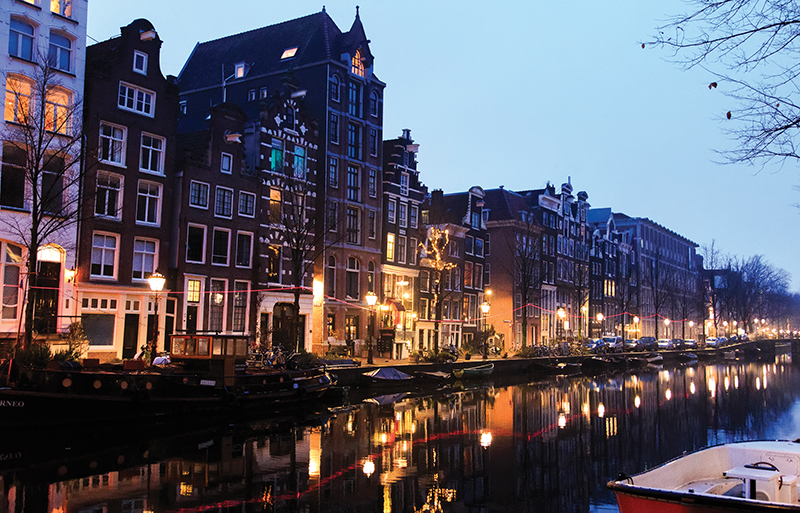 Inside Papeneiland, a rustic and cosy brown café on Prinsengracht, thick wedges of warm apple pie are consumed. I watch a fellow patron pour globules of double-thick cream over his 4‑inch apple pie structure with its cake-like crust encasing thin juicy slices of apple coated in cinnamon and lemon juice and a sprinkling of raisins – which is what makes this ultimate Dutch tea-time different from other apple pies. The secret to their apple pie recipe, which they’ve been baking on-site every day for +60 years, is the crust and the use of a few more perfectly browned apples, cooked in a little brown sugar. Bill Clinton has twice visited; on one occasion he ordered an entire pizza-sized pie to take back to his hotel. Sitting jewel-like beside a canal, Café Papeneiland, the Dutch equivalent of an Irish pub, and has been an Inn for more than 400 years, with floor-to-ceiling windows, a vaulted ceiling, ancient delft-blue tiles on either side of a turn-of-the-century wood-burning stove, antique wood-paneling, and framed newspaper clippings on the walls.

Louman on Goudsbloemstraat is an Amsterdam institution that’s been in business since 1895. It’s Holland’s best family-run butcher, renowned across Amsterdam for their Ossenworst – one of the sausages they produce according to traditional methods at their little sausage factory on the North Sea Canal. Ossenworst refers to the oxen from which this sausage was originally made back in the 16th century, according to kosher practice. Nowadays it’s typically beef and spices – salt, pepper, cloves, nutmeg, and mace inside a beef casing, which is very lightly smoked. Like steak tartare, it’s soft and tender on the tongue and requires just a drop of mustard to help it down. They also do their own take on the famed Austrian cheese sausage – Kasekrainer, a flavoursome sausage with melting cheese inside oozing with big tastes. You can taste the craftmanship.

The spicy sauce-heavy flavours at Swieti Sranang, one of the best Surinamese/Indonesian small eateries in Amsterdam, goes back to the 1600s and the days of Dutch colonisation. Despite its humble appearance on the exclusive Brouwersgracht, you’re guaranteed a taste sensation. The owners of this tiny hole-in-the-wall, Henk van de Weerd and his Indonesian wife, Juliet Chang, make everything themselves. One of the best bites of the day is Juliet’s spicy chicken Satay Ayam’s, basted in a rich peanut butter sauce (you’ll be forgiven in licking the plate). A firm favourite amongst her customers patiently waiting in line is bakabana – slices of plantain (or banana) coated in batter, deep-fried and served with satay sauce. Delicious!

Herring is Amsterdam’s best-known local delicacy. Preserved in brine, this addictive food is found at herrings stands all over the city. Considered to be the very cradle of local and seasonal seafood in The Jordaan is local fishmonger Dirk Bos, who’s shop, Urker Viswinkel on Tweede Egelantiersdwarsstraat, is stocked daily with hyper-fresh produce supplied by his brother, a fisherman from Urk. Dirk serves only the fattest herrings here in either a sandwich or sliced on a paper plate with onions and pickles spiked with a Dutch flagged toothpick. Another local favourite is his mouth-watering kibbeling – bite-sized, battered cod, straight out of the fryer, served with dipping sauces. Undoubtedly, the best fried fish you’ll taste in Amsterdam.

Walking into Sprenkels Bread & More, a bakery just a few paces from the fishmonger, you need to ensure that your hand and mouth agree not to involve your brain in decision making. Here your resistance will dissolve as quickly as their handmade chocolates on your tongue. Then there’s their Gevulde Speculaas which is a slightly sweet and creamy marzipan-like filling encased in a soft spicy crust, baked into a tube-shaped almond pastry. There’s a variety of Speculaas available in other bakeries around Holland, but this one is in a league of its own. Its crumbly casing is much softer than regular Speculaas, making it perfect for soaking up large quantities of coffee or tea. They also serve another Dutch delicacy – fresh stroopwafels, a waffle made of two thin layers of baked dough with a caramel-like syrup filling in the middle. The trick is to place the stroopwafel on top of your steaming mug, and leave it there for a minute or two, and eat it warm.

Tied up to the quay, outside the Pulitzer, a luxury 17th century hotel, is their traditional wooden salon boat, ​‘The Tourist.’ The salon cruiser is a time-capsule with original art nouveau details, polished teak and brass, marble, leather and bevelled glass. You’re in good company here as to celebrate the end of WW2, Queen Wilhelmina of Holland invited Winston Churchill to tour Amsterdam in this very same piece of maritime art – all except the engine, which is now electric. Whilst Captain Benno steers the boat, pointing out places of interest, a platter of geitenkaas (goat cheese) appears alongside locally brewed Texel beer. Like most goat cheeses, Dutch goat cheese is a bright white; but they have two varieties – the familiar soft version, and the harder type that can be sliced and put on a cracker. Captain Benno pauses alongside a quay long-enough to take delivery of a consignment of Bitterballen from Patisserie Holtkamp. Bitterballen are a popular Dutch beer snack that are fried to a golden crispness on the outside with soft, juicy veal ragù (or cheese for veggies) on the inside and served with a drop of wholegrain mustard.

Onto Café de Prins on Prinsengracht, passing the former Gestapo HQ and the sobering Anne Frank House, it’s time to pamper your palette with dessert which comes in the form of poffertjes – small spongy pancakes made with yeast and flour, dressed in butter and icing sugar, with a shot of coffee on the side. Another venerable institution, Café de Prins is true to its typical brown café roots, serving the best poffertjes and pancakes in Amsterdam.

Following a long day of sampling food, I head to my hotel. The street lights had already switched on, so the short walk to the other end of the now gentrified leafy suburb of The Jordaan is quite spectacular. The windows of crooked gabled houses cast warm pools of light which, from the street, give tantalizing glimpses of walls lined with books and sills of sprawling house plants and decorative antiques. The district bustles with bijou boutiques, small galleries, independent shopkeepers and purveyors of fine food. Most visitors to Amsterdam are familiar with its notorious tourist attractions, but seldom do you hear of them visiting for the food. This is what I told the concierge at my hotel who immediately added another culinary must-do to my list – Van Stapele Koekmakerij. I like the concept of a shop gaining international notoriety for producing just one item – in this case a dark chocolate-chip cookie with a gooey white chocolate centre. Here we’re talking love at first bite; culinary cookie art made by mermaids.

Where to stay: The Hoxton, on Herengracht, is dripping with cool. At one time it was the Mayor’s house, made up of five canal houses and spread over five floors. I’m tempted to call it a luxury hotel, but this is a much over-used word. Describing it as trendy, with both period and industrial features, is more to the point. What is truly refreshing is their no-nonsense approach to room rates which are divided into three categories: shoe-box, cosy and roomy (No 516, a cosy room, has gorgeous canal views). The mini-bar contains just milk and water; if you seek an alcoholic beverage you’re encouraged to visit the bar, alternatively buy a bottle of your choice from reception at supermarket prices. Lotti’s restaurant has an open kitchen which Sous Chef, Benjamin Elzenaar, keeps local by sourcing ingredients from Dutch farms. His modern-French-Mediterranean cuisine is inspired by other high-class restaurants and staff input. My dinner of scallops smells of the sea – no doubt sourced from Uker Viswinkel.