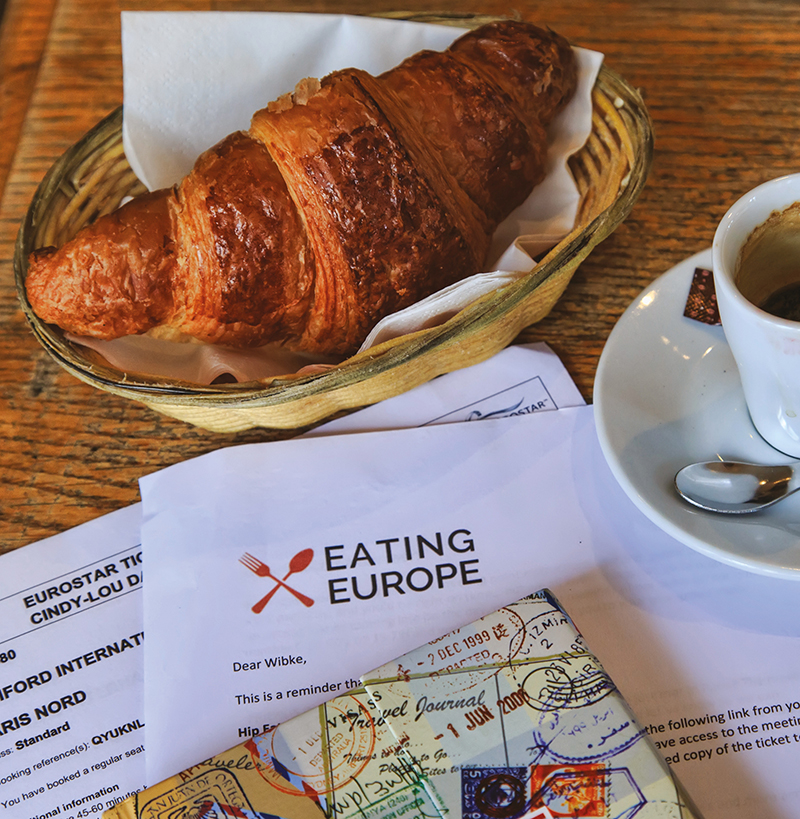 There’s only one true way to get to know Parisian food, and that’s to go there and eat the food amongst the people who cook it and eat it every day. That way its seasoned with a sense of the place, the landscape, the culture and traditions.

I’m on a food tour of the 10th district which, in its previous life, was recognised as the fur and crystal quarter of the city. Until a decade ago, it lay dormant and was known locally as the ​‘metro’ district because of its proximity to Gare du Nord and East Railway Station. Now it’s a gentrified ethic mix, filled with hip eateries and discreet sidewalk cafes.

Trust the French to give the cheese and ham toastie a fancy name and pretend they invented it! I pick up my take-out toastie and sit on the wall of the tree-lined Saint-Martin canal, adjacent to Fric-Frac, a restaurant dedicated to the croque-monsieur. I unwrap the greaseproof paper encasing my toastie – two slices of white bread (crusts removed), filled with thin slices of Gruyère cheese and a sliver of ham. How hard can it be to make it, I thought. I find my answer when I sink my teeth into their croque-monsieur. When the French tackle a dish they do so with passion, and it cannot be denied that what I’m eating is possibly the world’s finest cheese and ham sandwich. The combination of nutty, stringy Gruyère, soft, salty jambon blanc and crisp, OMG buttery bread.

My guide explains that Fric-Frac’s bread is made by Frédéric Lalos, an MOF craftsman; the ham is sourced from Rungis (a marketplace outside of Paris specifically geared to restaurants); and raw-milk Gruyère cheese sourced from the meadows of Savoie and Franche-Comté, south-east of Paris, near the Swiss border. If a ham and cheese toastie isn’t for you, I guarantee their signature ​‘green sandwich’ will be – pine nuts, avocado, capers, pea pesto, tomatoes and asparagus. (Fric-Frac, 79 Quai de Valmy, Canal Saint-Martin)

The TSF Epicure, is a divine little deco-styled charcuterie and delicatessen on a side street off the Canal Saint-Martin. It’s an independent café crammed with every conceivable authentic culinary delight and is where I sample a selection of cured hams, pates, bread and red wine. Sophie, the arty and well-travelled Parisienne proprietor, speaks with a customer who asks after the origin of the beef going onto her sandwich. A long, animated discussion ensues about the valley, the mountains, and herbs which the cow eats. It was jointly decided to go with a less miles travelled meat, which would be dressed in a light shaving of black French truffle. (TSF Epicure, 9 Rue Alibert) 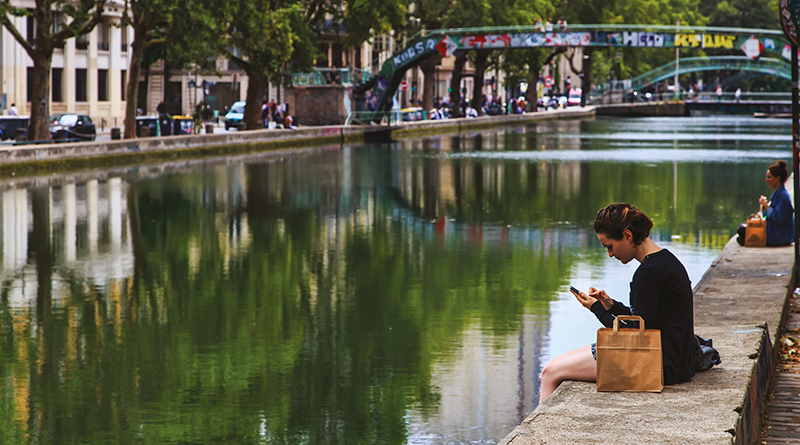 At L’Amalgame, a small 6‑table family restaurant, I sample my first-ever tasting of genuine couscous. The traditional manner its cooked in dates to 200BC and remains unchanged. The proprietor, Nasser Ouallouche, states that although he knows the ingredients to be semolina flour, water and olive oil, only his wife, Nora, knows the proportions and the method used in massaging it through a sieve, then cooking it three times. I ask after the vegetarian option and am served a super fine, nutty couscous served with a broth of turnips, zucchini and fava beans (a drop of harissa sauce adds much excitement to the dish). It arrives with mint tea and, in case I want to give it a go, a red, spicy mutton sausage whose recipe originates from North African Berber cuisine. I slipped one into my bag to take home for my husband to sample but consumed it on the way to my next stop. (L’Amalgame, 12 Rue Bichat)

In the basement of Paroles de Fromages, Caroline De Seze, guides me through a cheese tasting, speaking of the aging process, the slow passing of time and about future generations. The first sample is Crottin de Chevre – a small, round cheese made from goat’s milk and produced in the Loire Valley in the village of Chavignol, which has only two hundred inhabitants. This is followed by Brillat Savarin, a soft, white-crusted cow’s milk, triple cream brie cheese from Burgundy; Brie de Meaux – a gorgeous, buttery, earthy cheese that’s the most famous of all Bries and steeped in 1,200 years of French history. It’s still traditionally artisan-made, just 30 miles east of Paris in the region of Ile-de-France; Beaufort, a firm, pressed cheese made from raw cow’s milk and produced in Beaufortain, in the Savoie region of the French Alps; and lastly, Tomme de Savoie, a mild, semi-firm cow’s milk cheese with a thick brownish-grey rind. I couldn’t decide which was my favourite, so I took home a little of each. (Paroles de Framagers, 41 Rue du Faubourg Du Temple) 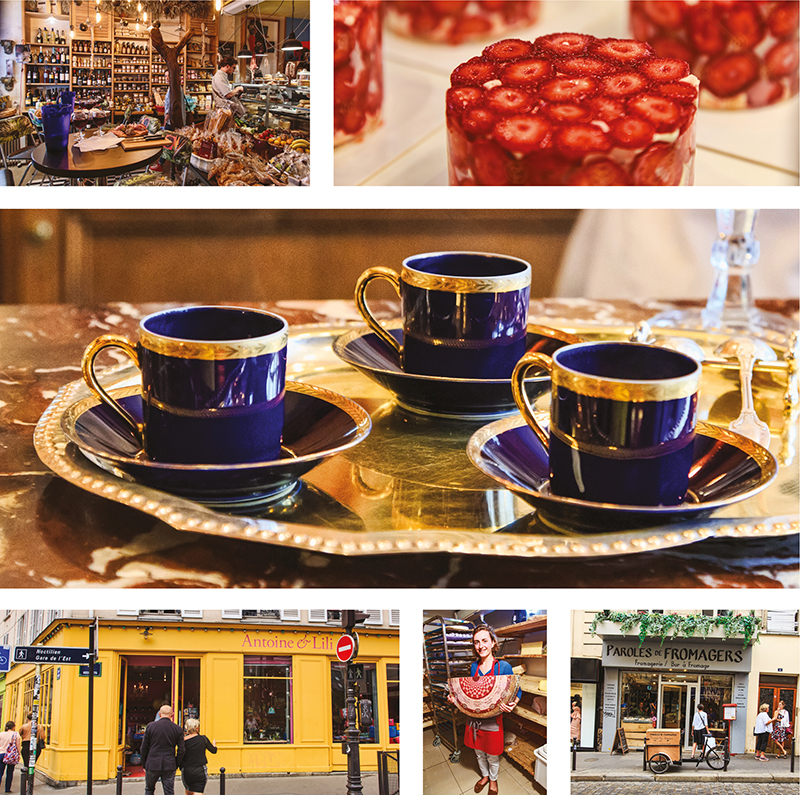 For dessert I collect an elegantly wrapped box from Yann Couvreur, a pastry chef of the Prince de Galles palace who decided to open his own pastry shop. I find a bench at Park Temple, adjacent to the tower where Marie Antoinette and Louis XVI waited execution, and consume a raspberry tart with tarragon cream, a perfect mix of acidity and crispness and an Éclair Caraibe, which is filled with mocha and anise – gourmand to infinity. (Yann Couvreur, 137 Ave Parmentier)

To round off the four hour tasting tour I stop at Buly who, since the early 1800s, carries cult French beauty products and perfumes, but also has a charming café – Grand Café Tortoni. Over a couple of kick in the pants espressos my guide tells me that French sculptor, Rodin, created ​‘The Thinker’ in the foundry at the back of the shop. (Buly, 45 Rue de Saintonge)

My guide, Leo Goldstein, a local of Jewish Algerian decent knows the streets and cafes like the back of his hand. He provides a glimpse of a formula combining art, music, location – the ingredients of a concept behind the district’s food, making it that much more interesting.

I’ve come away from Paris with the realisation that ethnic influences have changed the city’s food, it goes against the grain, swimming upstream. It’s non-conformist – provocative even, a seduction of tastes. Using colour, emotions, images and history, it translates into an exciting story and plays tricks on the palate.