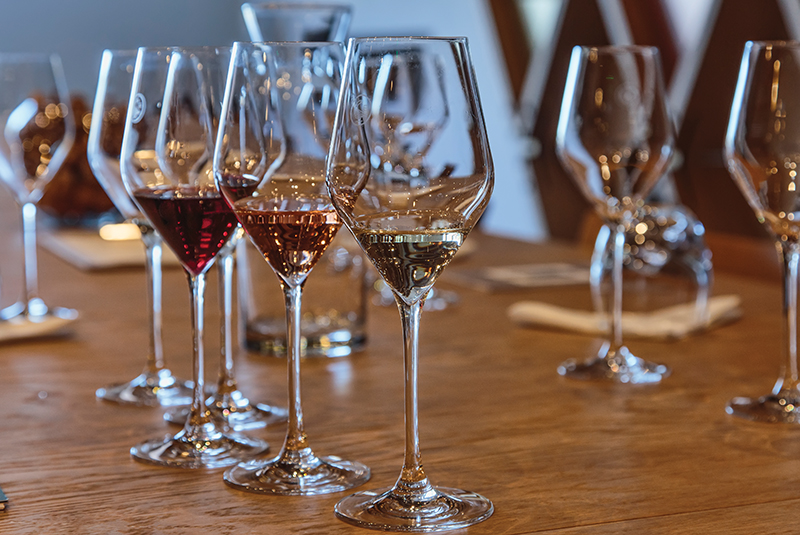 The multi-award winning Gusbourne Estate has become a standardbearer of quality English sparkling wines. Now, to much acclaim, they’re playing around with still wines.

Gusbourne’s 60 hectares sits on the low slopes of the ancient Romney Marsh in Appledore, Kent. The distinct clay and sandy loam terroir and exceptionally mild coastal micro-climate provides long growing seasons, creating conditions beneficial to the production of complex grapes. They have another 30 hectares in West Sussex; both are under vine cultivation with classic champagne varietals of Chardonnay, Pinot Noir and Pinot Meunier grapes.

In 1085, William the Conqueror commissioned the Domesday Book, enabling him to estimate the wealth of the country and the taxes owed to the Crown. Men were sent out to every corner of the land with the task of mapping out the assets of each landowner. This is the first record of Appledore, which was lorded over by the Archbishop of Canterbury. But it wasn’t until 1410 that mention was made of Gusbourne Estate in John de Goosbourne’s will. Since then the estate passed to numerous dignitaries, including Philip Chute, a man of distinction and wealth, who was held in high esteem by Henry VIII. The ​‘Goosbourne’ family crest, which depicts three geese, still adorns the small parish church in Appledore. Paying homage to their heritage, Gusbourne uses these same three geese on all their bottle labels. 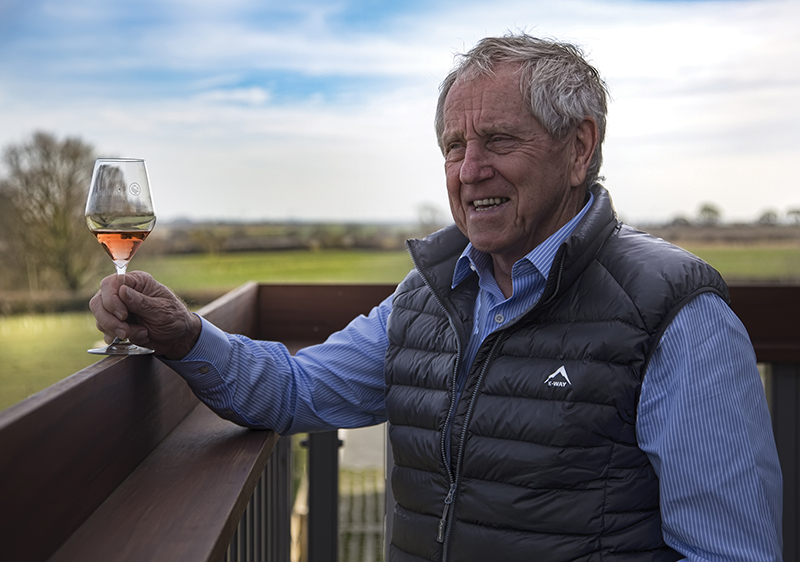 With a single goal in mind of creating the world’s finest wines, Andrew Weeber took over Gusbourne in 2004, and set about changing his ​‘turnip patch’ into a vineyard, creating an English sparkling wine that stands alongside other big hitters. The only way he felt this would happen was to source the grapes solely from Gusbourne vineyards. This, Weeber felt, would ensure the quality of the grapes. With this vision in mind, he chose to plant predominantly Burgundian clones in the vineyards. Although the yields were lower than other classic clones, the resultant fruit delivered significantly more flavour, making them ideal for quality sparkling wine production.

Weeber’s first vines were planted in 2004 and six years later, to great acclaim from some of the industry’s most exacting critics, delivered their debut Brut Reserve and Blanc de Blancs.

Gusbourne takes no short cuts. They consider themselves as guardians of their vineyards, guiding the grapes through the winemaking process, respecting the natural elements involved in winemaking and favouring minimal intervention. This is done by combining age-old traditions with modern technology whilst using cutting-edge equipment, which delivers wines that reflect the serenity and fastidious attention to detail demanded of the craft. From the way they grow their grapes to the way they barrel age their wines, each bottle holds character and individuality.

The grapes are hand-picked by a long-standing local team who ensure only the best bunches are brought into the winery (those that don’t make the quality inspection are mulched back into the soil). The bunches are gently pressed then fermented in stainless steel tanks and oak barrels. Once bottled, the second fermentation takes place with yeast and sugar added. It then rests for three years, allowing the wine and the yeast to get acquainted and eventually delivering champagne-like aromas and flavours. This is followed by a week of ​‘riddling’ (tilting) on a gyro-palette. The yeast is then disgorged by freezing the neck of the bottle and finally the champagne corks and muselets (wire cages) are added. The sparkling wine is then left for a further six months, giving it time to ​‘cork age’ and knit back together again, before it’s labelled.

Winemaking is an unhurried and exacting process which, from planting the vines to pouring the first glass, takes eight years. Now, the only winery listed on AIM, Gusbourne follows precise, self-imposed constraints to preserve rigorous quality standards, ensuring minimal intervention during the production process.

Should the staple stock of the HRH​’s wine cellar hold sway, it seems Gusbourne have earned the feather in their proverbial cap and can now safely claim they’ve attained their ​‘world’s finest wines’ vision. 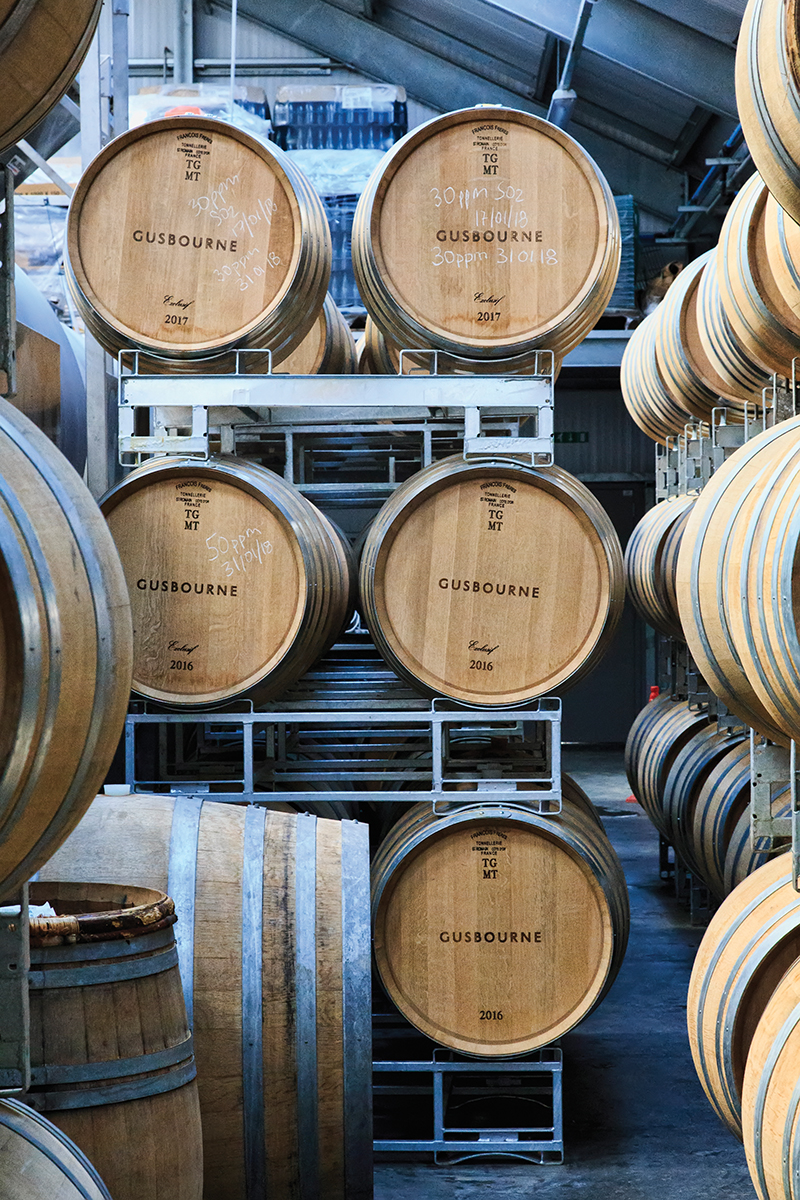 Gusbourne Blanc de Blancs 2013 is their flagship wine and one of the finest sparkling producers the country has to offer. It’s bright gold in colour and light on the taste buds – 100 percent Chardonnay with a lemon zest character and smells of the sea.

Gusbourne Brut Reserve 2013 is their best-selling sparkling wine. It has a bright-gold hue and is crisp and dry but creamy, a little toasty even, with pastry and citrus notes.

Gusbourne Rosé 2014 is a berry-rich and delicate pink sparkling rose. The 60⁄40 Pinot Noir/Chardonnay blend changes from year to year, but a constant is that it ages for just 18 months. It’s an intense soft and crisp wine, a grown-up’s rosé, which has consistently been favoured in blind tasting awards.

Gusbourne Pinot Noir 2016 is fermented on-skin for two weeks, producing a spicy, creamy, cherry- coloured wine which, according to Decanter Wine Awards, is the best ​‘red’ produced in England.

Gusbourne Guinevere 2014 is one of the best English single varietal still Chardonnay wines you’ll try. To the nose, aromas of new oak, lemon and cinnamon dominate, and to the palette it’s buttery and cream-like.

Gusbourne Product V Vermouth has Pinot Noir at its base and is macerated with 32 ingredients which delivers a potent, dried fruit, incense-like spice mix. Its huge depth and complexity brings ripe red fruits and orange peel to the nose and is loaded with intense smoky characteristics.

Gusbourne wines feature in many of the UKs most renowned eateries – Le Gavroche, Le Manoir Aux Quat’Saisons, The Fat Duck, Nathan Outlaw at the Capital, L’Enclume and Northcote. See their list of stockists in your area
www​.gus​bourne​.com/​s​t​o​c​kists.

Make a day of it and take a self-guided walk around the vineyard or, for a small fee, partake in a hosted tour and meet the people who make the wines, followed by sampling the delights of Gusbourne in ​‘The Nest’ – their new state-of-the-art tasting room. Here you’ll find what makes this corner of England so unique for winemaking. www​.gus​bourne​.com/​visit