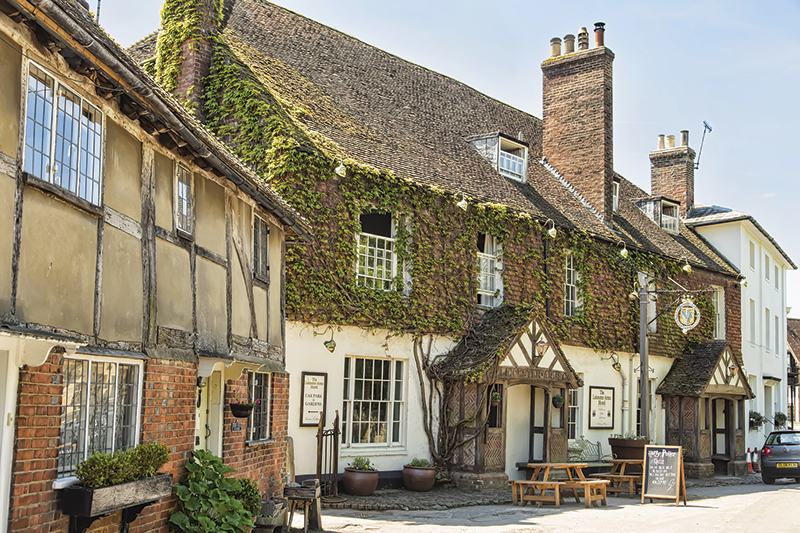 Whichever route you take to the picture-perfect village of Penshurst, be that via the pretty little bridge with the village and church stretching up the hill or through the archway from Penhurst Place, an Elizabethan Manor, the visual effect is breath-taking.

Penshurst, just seven miles south of Seven Oaks, is a jumble of Tudor, Georgian and Victorian homes built by the numerous Earls of Leicester and their ancestors, who have resided in Penshurst Place for centuries.

Standing just a few metres away, opposite the gates to Penshurst and St John’s, the parish church, is the Leicester Arms Hotel, a 16th-century creeper-clad inn.

On approach you’ll spot a pile of walking boots outside the entrance door which gives the Grade II listed building an off-the-beaten-track charm. The Leicester Arms Hotel was named to honour a previous owner – Robert Sidney, the Viscount De L’Isle who, in 1618, was appointed Earl of Leicester.

In recent years its been restored to its former Tudor elegance and represents exactly what you’d expect of a traditional country pub.

Beyond the grand hallway, with its flagged floor, are heavy oak doors, a plush Chesterfield and huge ornate mirror. Expect to find wonky timbers, reclaimed oak floors and a blazing fire in the beamed bar, which is modestly furnished with stuffed leather chairs, a few small tables and antique rugs. Above the intricately carved imbuia-wood bar hang five industrial lamps, spotlighting cocktails created by Thomas Tyre and Luke Milner.

Beyond the adjoining red-brick floor snug and up two short steps, you’re in the dining room with its fine assortment of old tables and a jumble of ancient chairs. The sprawling grey wood-panelled room is adorned with portraits of past Earls who look through the expanse of windows and the views across the countryside.

Craig McSweeney, the executive chef, has turned this 3‑rosette restaurant into a foodie destination. He sources all the best ingredients from artisan producers within 20 miles of Tunbridge Wells – like Steve Fullers for fresh cuts of meat, Matthew Sankey’s for just hooked fish, potatoes from Tenderten and game from Hedgerow.

His modern take on the British menu changes with the seasons and creates traditional classics but also produces local favourites like the Leicester Arms’ Steak Burger with smoked cheese, bacon and chunky chips; and Salmon fillets served with a fricassee of baby gem, peas and garlic aioli. Puddings are a sinful affair and the two consumed at my dinner table included a Lemon Tart with black currant sorbet; and a Belgian waffle with Chantilly cream and toffee sauce.

Outside, the beer garden’s three terraces slope down to the River Medway, making it a perfect alfresco suntrap.
Upstairs are 12 spacious bedrooms which have been simply refurbished with antique furniture and nobility wall art. Some rooms have views across rolling fields, and others of the church across the road. Comfortable hand-crafted Hypnos mattresses, luxury Egyptian cotton bed linen with sateen weave and cosy down duvets adorn king size, four-poster and Louis XIV-style beds. The bathrooms are fully tiled with power showers over baths. There’s also free Wi-Fi, digital TV, and a hospitality tray containing tea/coffee making facilities.

The Leicester Arms Hotel is a smart country pub with big guest bedrooms. It’s been given a good spruce up without losing its charm. It’s not been messed with to make you think it’s something it’s not, and there’s no clutter. It’s not been zhuzhed up with Farrow & Ball and neither is there trendy recycled furniture. It’s just all genuinely old but loved and taken care of by a team of young, enthusiastic locals who take pride in their little patch of history.