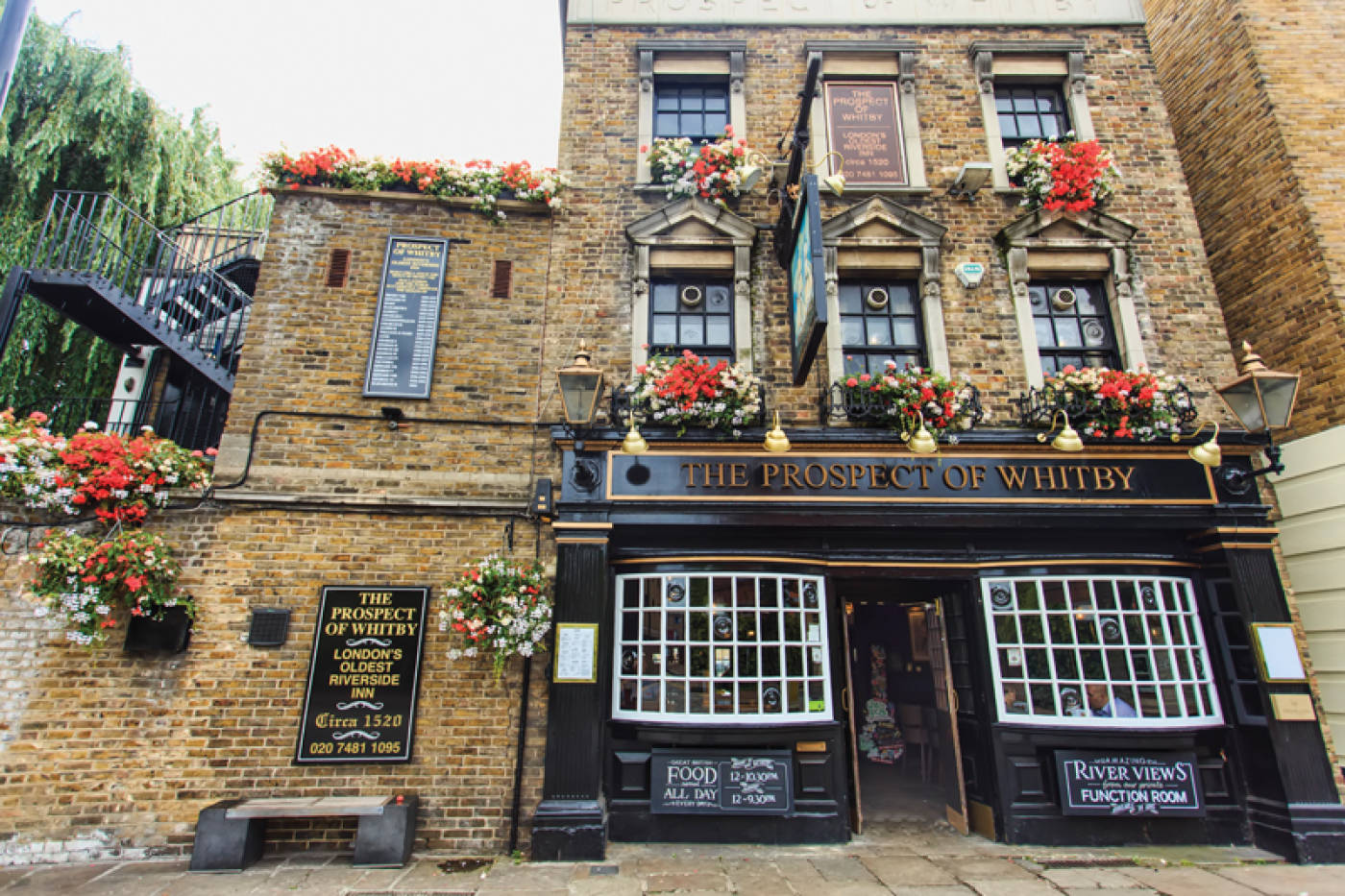 A pint of bitter and a side of history

There are few more essentially English experiences than enjoying a pint of ale in a centuries-old public house, where the walls whisper of the past. Given the destruction inflicted by two World Wars and the Great Fire of London, it’s quite remarkable that some still stand.

Of all the Thames-side pubs, The Mayflower (117 Rotherhithe Rd) is the most special – not only for its atmospheric, tucked-awayness, but its history. Order a pint of Scurvy, a plate of Bangers (from a local Bermondsey butcher) and buttery Mash, served with Black Pudding and red wine onion gravy and learn about this old public house, which marks the site where the famous The Mayflower (an aging cargo ship) was moored before sailing to Plymouth, and eventually America. There’s a ​‘The Mayflower Descendants Book’ available to those who can prove a family connection to the original Pilgrim Fathers from The Mayflower 1620 voyage. 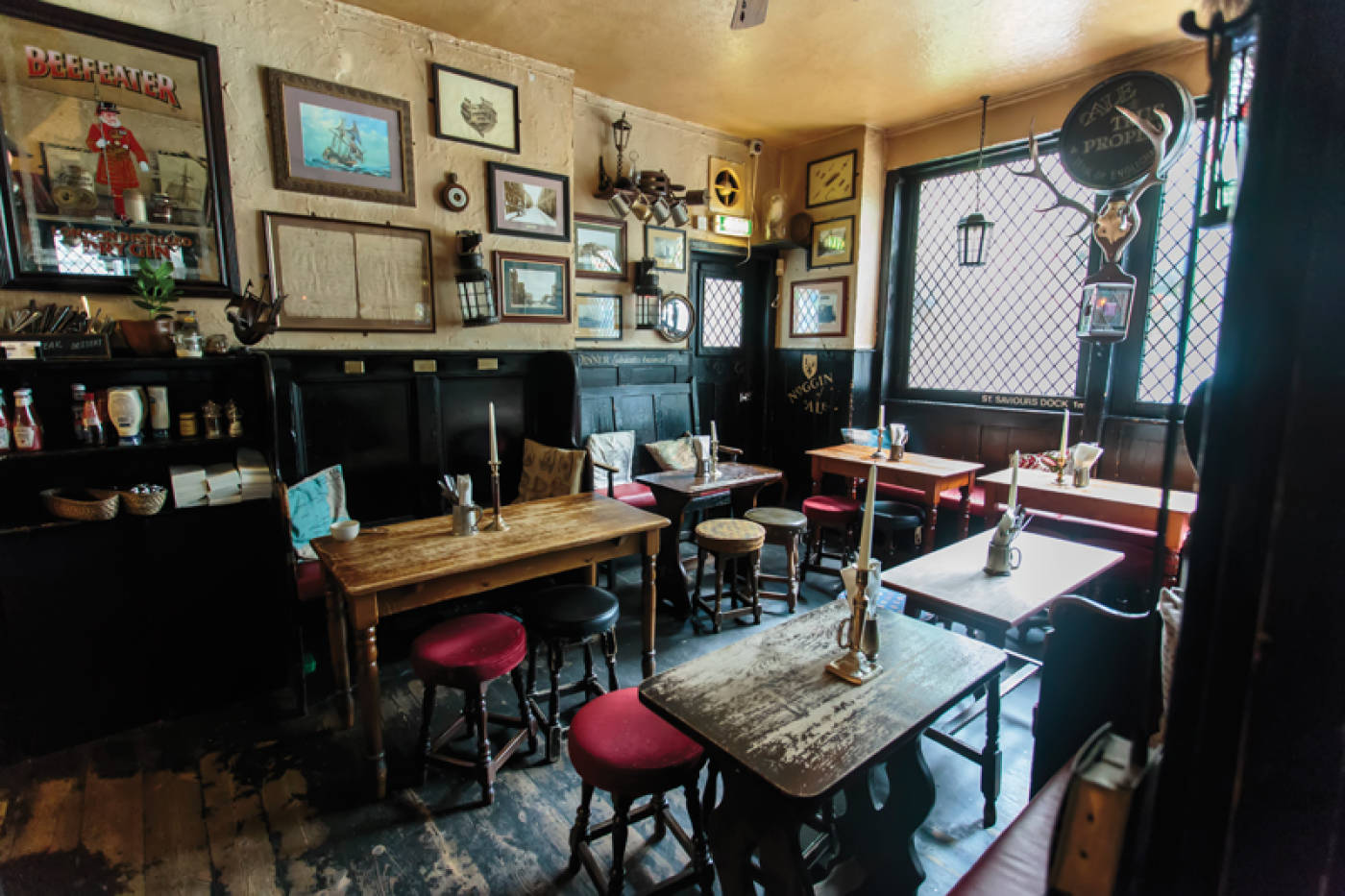 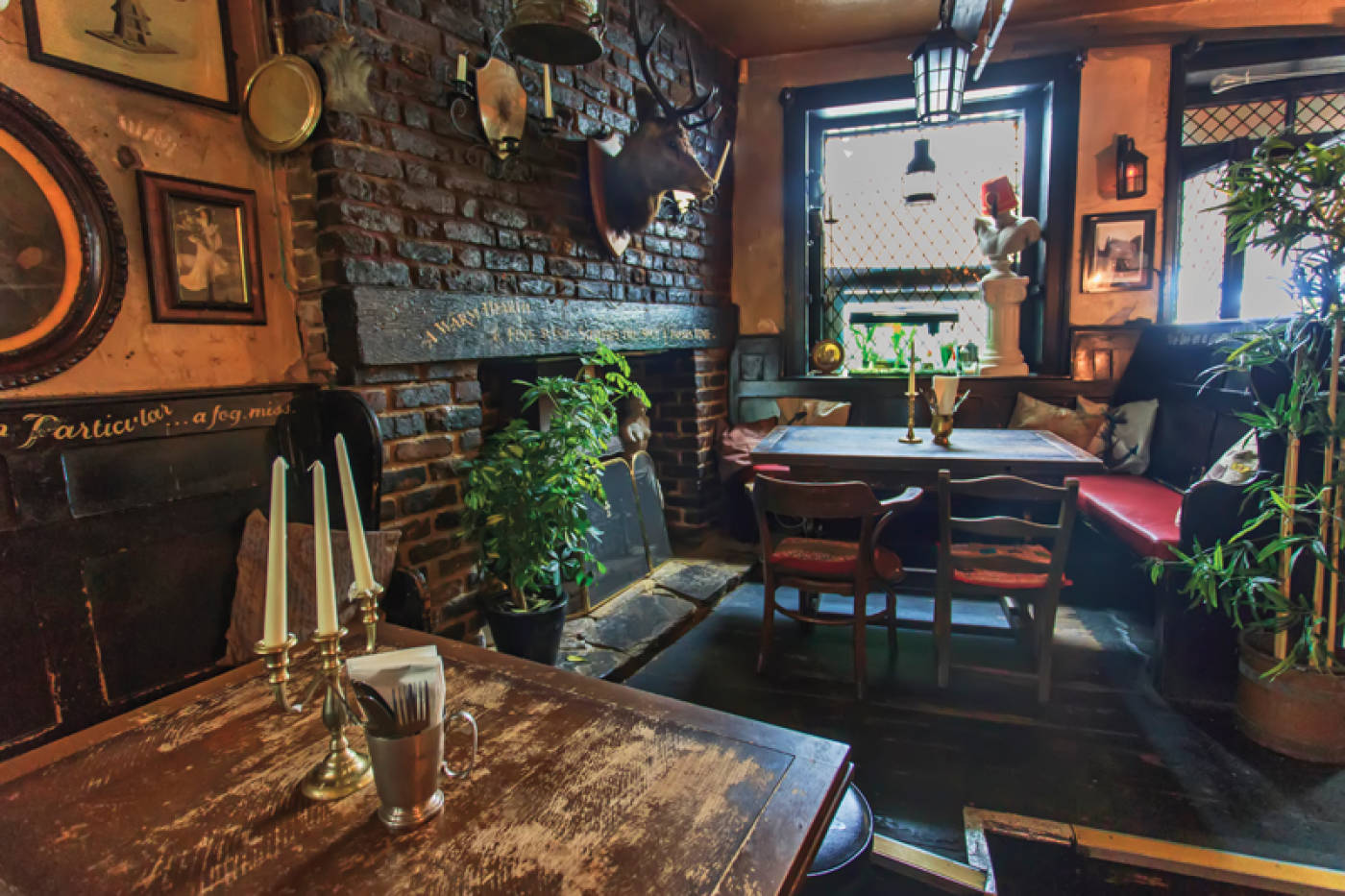 Across from The Mayflower is the Brunel Museum which sits beside the Rotherhithe train station that leads under the Thames in the world’s first underground tunnel (built by Brunel). Rotherhithe has a long history as a port, and was once the largest in the world (boasting 36 inns). Its Elizabethan shipyards remained working docks until the 1970s. In the 1980s the immense warehouses along the river were redeveloped, gentrified even, into upmarket apartments.

From the opposite side of the river, it’s a short walk to the Prospect of Whitby (57 Wapping Wall), the oldest riverside inn in London that just oozes history. You enter across flagstones dating back more than 500 years, walking in the footsteps of Samuel Pepys (naval administrator and Member of Parliament), artist Joseph Turner (who sketched the views from the pub) and Winston Churchill. Order a Kapow pale ale, fish (from the Billingsgate Market) and chips (with mushy peas) and learn about the riverside hangman’s noose. Back in the day the Prospect of Whitby was known as the Devil’s Tavern which, in the 1500s, was a popular meeting place for sailors, smugglers and villains and where the notorious Judge George Jeffreys aka the ​‘Hanging Judge’ would stand watch over executions from an upstairs balcony. The execution dock brings with it ghost stories – including one in which the Hanging Judge himself got strung up. The neighbouring old warehouses may now be luxury dwellings, but the pub still feels like the shadowy haunt of weather-beaten sailors, smugglers and pirates. 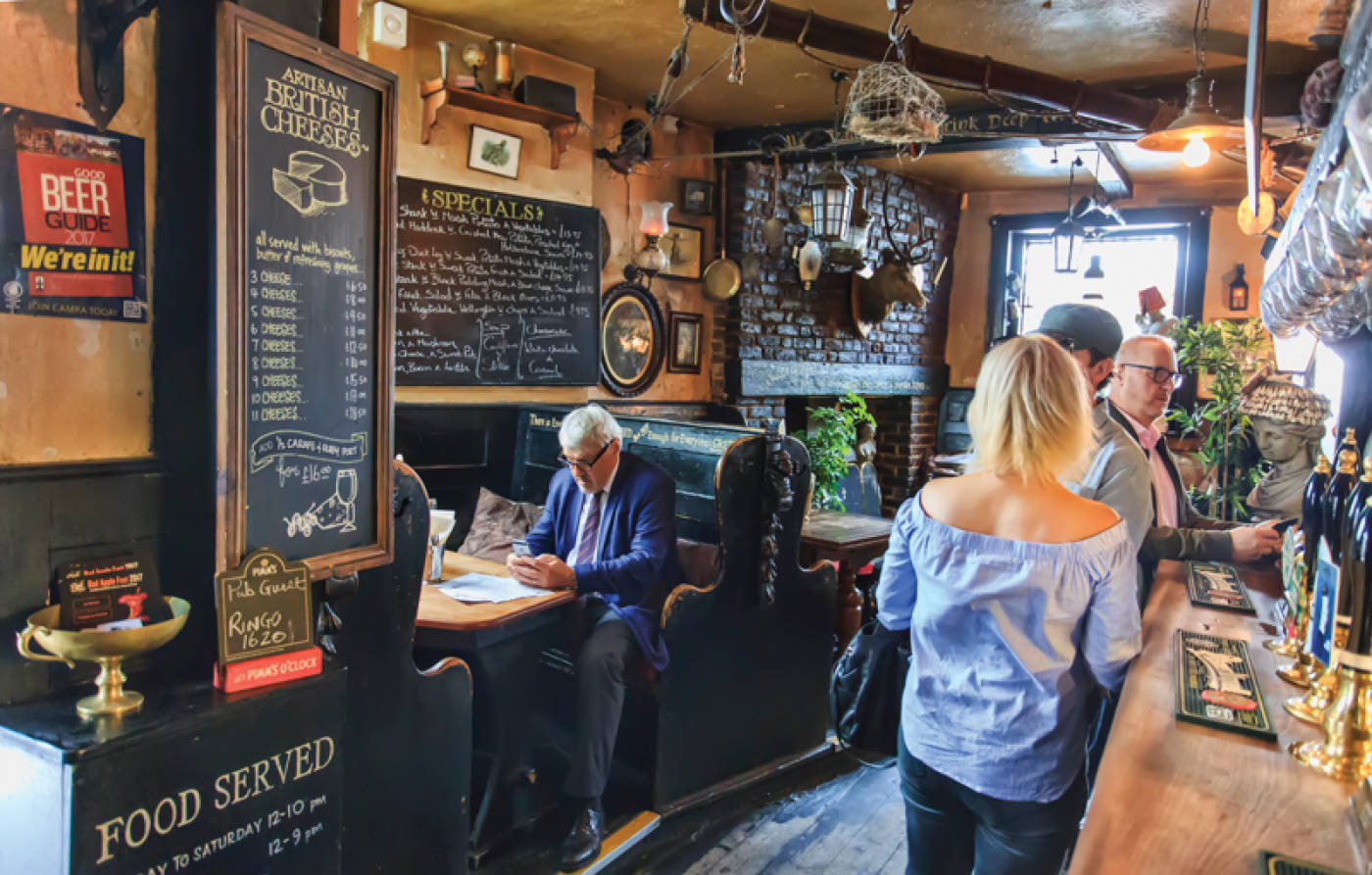 It’s a short walk to Turners Old Star (14 Watts St, Wapping), considered a no nonsense East End treasure, dating back to the 1830s. It was one of two cottages inherited by artist Joseph Turner, who converted it into an inn, installing his mistress as the pub landlady. As with other historic pubs in London, Turners Old Star has appeared in numerous movies including ​‘Legend’ (staring Tom Hardy), depicting the Kray brothers’ life of crime in the 60s. Bernice, the present pub landlady, makes the best pies in London and knows how to keep a good ale.

Walking in the shadow of meticulously restored ancient warehouses, trudge along to Captain Kidd, formerly a 17th century coffee storehouse. Hussle up a Famous Taddy Porter stout and a packet of pork scratchings and learn of the shenanigans of Scottish sailor, Captain Kidd, a notorious privateer turned pirate who was hung at the execution docks. Legend persist that he’d buried his treasure in the Caribbean, which is yet to be found. This true-life event inspired Robert Louis Stevenson in creating ​‘Treasure Island’. 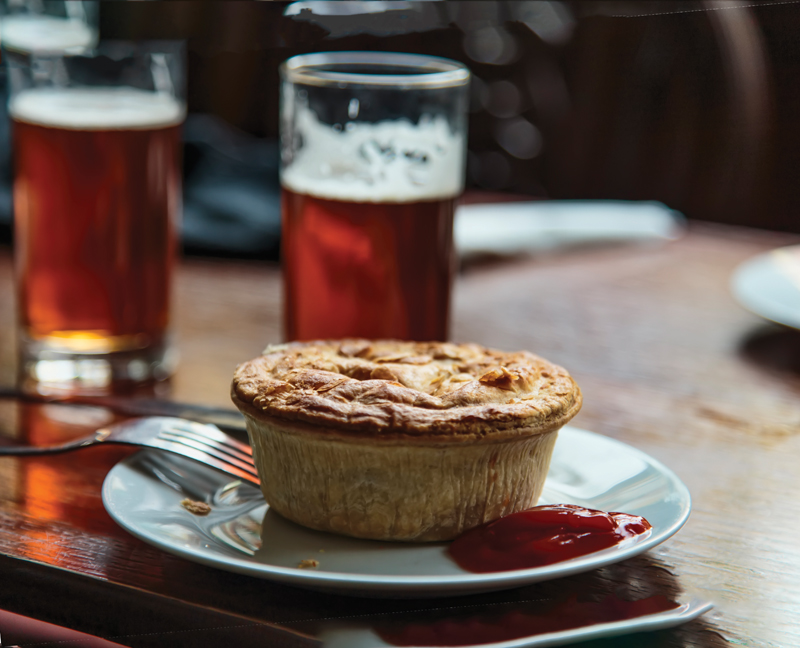 Onto the next bit of drinking history, beyond Oliver’s Wharf (the first East End warehouse to be renovated), you’ll pass the understated Thames-facing homes of actress Dame Helen Mirren, musician Rod Stewart and comedian Graham Norton, who all enjoy a pint at the local. Heading towards St Katharinne’s Dock – a trendy, hidden area behind Tower Bridge, is the unique Dickens Inn (50 St Katharinne’s Way). Originally this three-storey, 18th century, timber-clad building, adorned with colourful flower baskets, was a tea warehouse. Order an Asphalt Cider and a few wedges of regional cheese, and contemplate the long and intriguing history intertwined with Charles Dickens.

London is filled with marvellous history, but if you want to feel like you’ve stepped back several hundred years in time, there’s nothing quite like the historical pubs along the East End docks, which was once home to a bustling trading port, full of thieves, dockers, sailors and pirates. It’s a lot quieter now – a residential area, lined with cobbled streets and old warehouse buildings, some restored to sparkling newness, others left to look a little rough around the edges. The dockyard workers and sailors may be long gone, but the places they ate and drank in, and their stories, are still very much alive. Here history is all served up with London’s best craft brews, its finest pub grub and the tallest tales for you to hang your hat on.

A knowledgeable guide walking you through it all makes all the difference. Tables are reserved, service is pin-sharp, with the best East End pub-grub and ales appearing in minutes – waiting for history to unfold. www​.eat​in​glon​don​tours​.co​.uk/​h​i​s​t​o​r​i​c​-​p​u​b​-tour