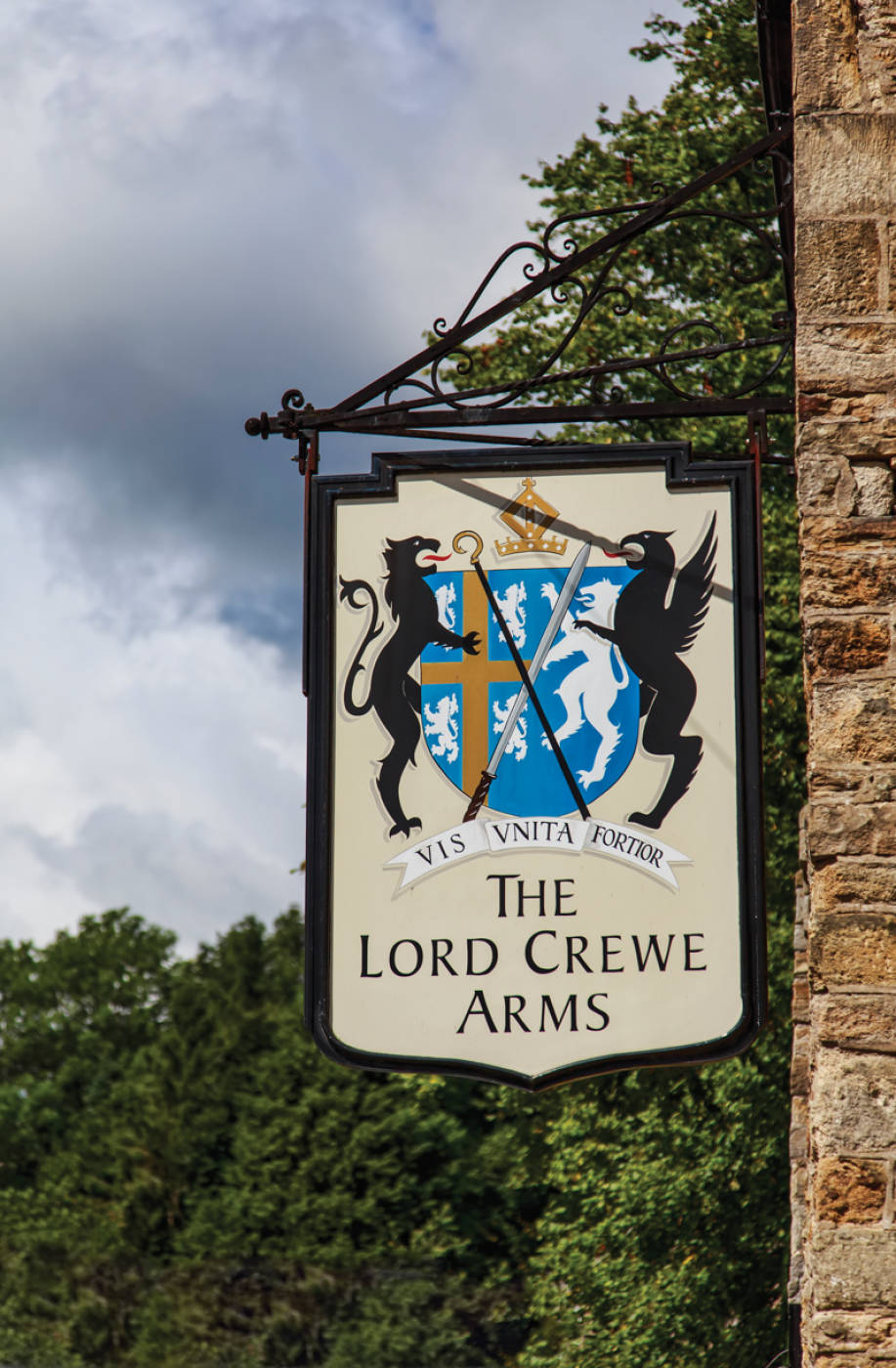 Built partly to generate income for the Church of England, Blanchland is that rare exception in Britain: a planned village, with houses grouped in squares, rather than scattered along a road.

Out in the wooly wilds of the North Pennine moors, is Blanchland – one of those estate villages that remains untouched by times, and will have you swooning at its beauty. It’s been the set for a string of films, including Thomas Hardy’s ​‘Jude’ and several Catherine Cookson romances. 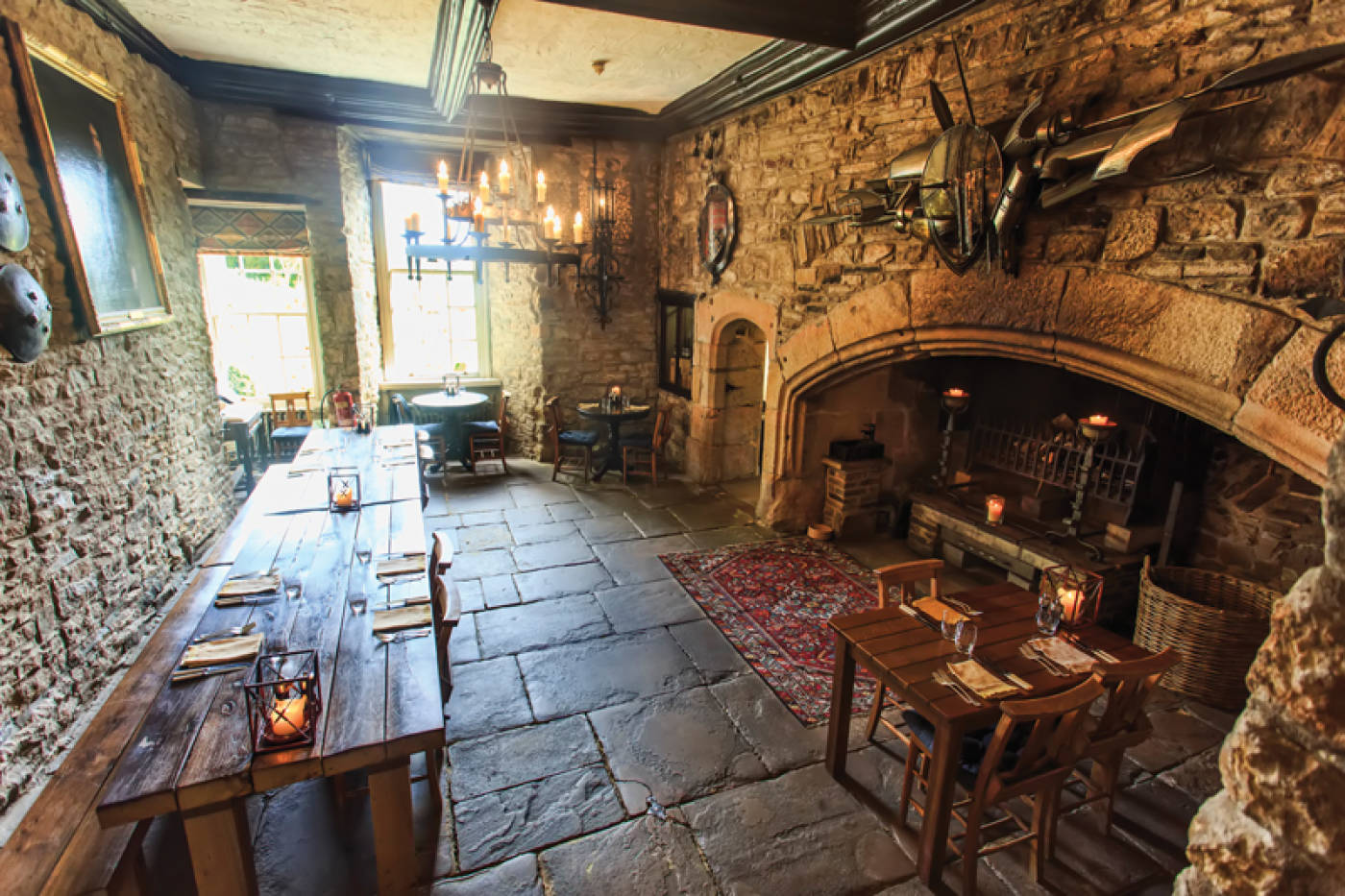 Presiding over Blanchland’s honey-eyed-stone miners’ cottages is the imposing Lord Crewe Arms – the former abbey, which was built by courageous 12th century Prémontré monks seeking spiritual isolation. Five centuries later it came under the ownership of Nathaniel Crewe – the Bishop of Durham. Since his death, in the early 1700s, it was named the Lord Crewe Arms, in his honour, and served as a coaching inn and village pub.

Take the extravagance of a country-house hotel, fuse it with the gusto of a rural pub, then top it off with sophisticated design – and you’ve got the measure of this place. It oozes history from its crenellated towers, heavy studded doors, thick stone archways and vast fireplaces which merge with pale-painted floorboards, tartan cushions and wrought-iron candelabras. It’s vast and light, with quirky corners and unexpected flights of stairs, antlers on linen-clad walls, and overlooks the croquet lawn garden with exposed remains of the Chapter House. 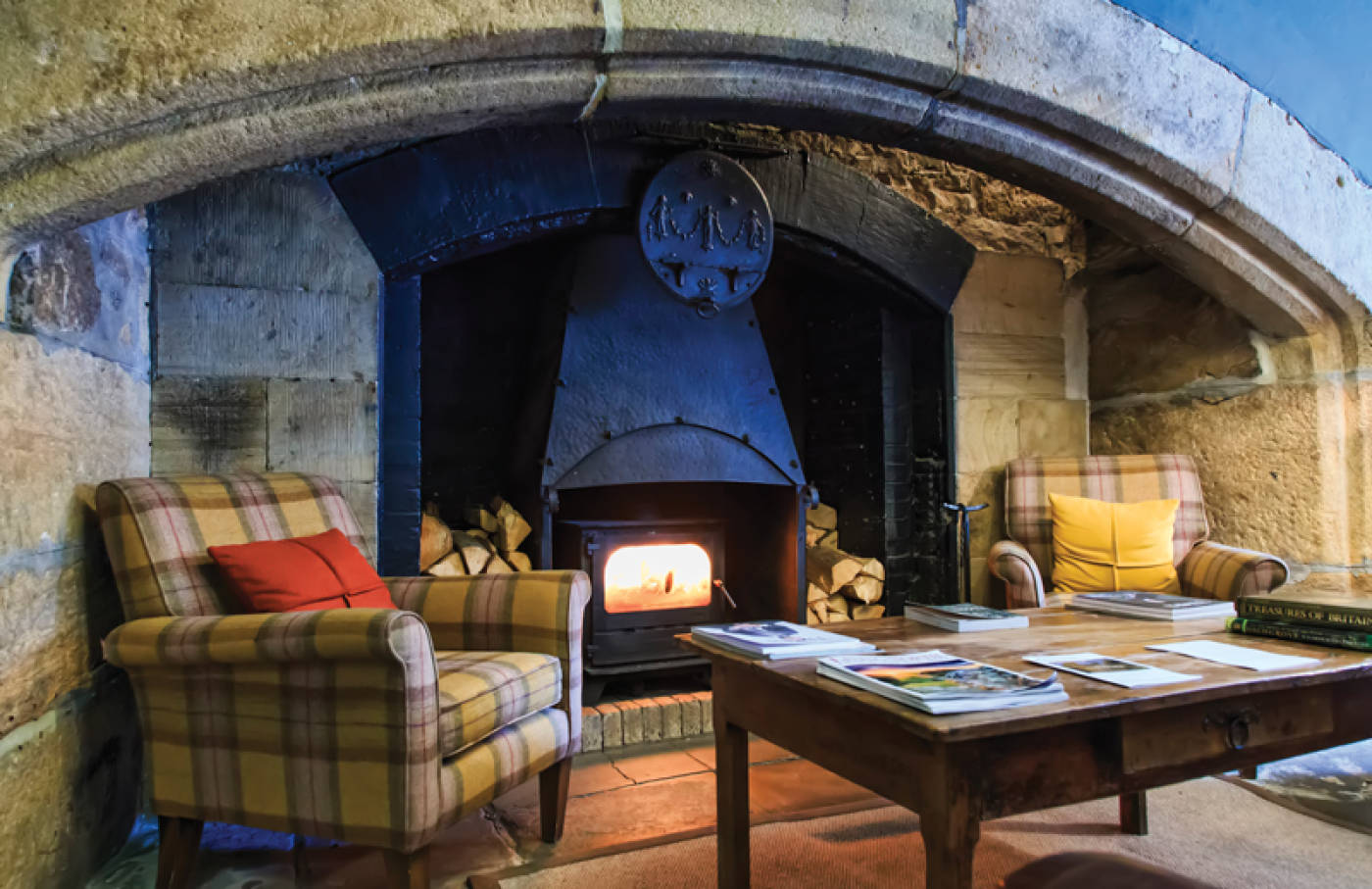 Its village location is perfect – opposite the square and village store, next to the church and within stepping distance of both the river and village tea-room. But this isn’t some gimmicky historic re-enactment; the hotel is a slick and professional operation.

The 21 bedrooms and suites, spreads across the Abbot’s Guest House, through the adjoining cottages and across the road to The Angel of Temperance inn, are a symphony of Farrow & Ball taupe’s, sash windows dressed in heavy drapes puddled on the floor, lambs’ wool throws and Egyptian cotton linens. There’s lots of exposed stone and untreated wood, antiques and battered leather. The rooms in The Angel are named after local shooting moors – like Muggleswick, Rookhope and Weardale; and there’s lots of little extras like a fluffy hot-water bottle, a smart tea-tray with ginger-nut biscuits and a sizable wedge of Northumbrian fudge. 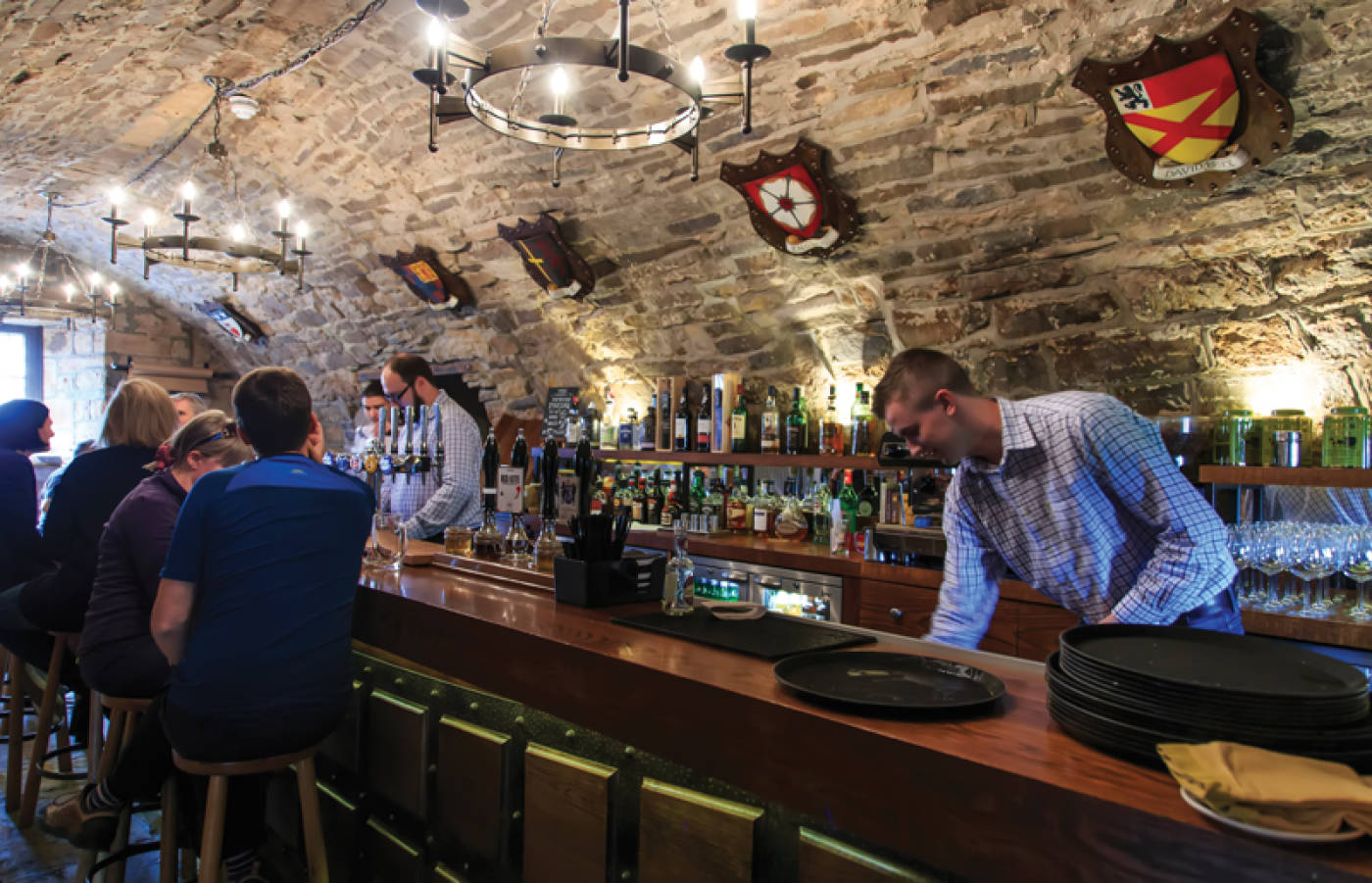 Most guests, including seasonal shooting parties, disappear all day to walk, cycle or explore Hadrian’s Wall, then return to skilfully cooked food and a good local pint in the crypt bar which, with its vaulted ceiling and giant fireplace, looks like a medieval tavern frequented by those who would need to change horses.

There are two dining rooms – downstairs, in The Hilyard, where stone walls are hung with large portraits and wrought-iron sculptures (as well as a reworked suit of armour), are wooden trestle tables that look ideal for carving up freshly speared game. With its vast open fireplace, it could well be a Game of Thrones set. For fine dining, you need to take the stone steps up to one of the loveliest dining rooms in the north of England. The vast and airy Bishops Dining Room is one of the most distinctive dining areas imaginable – an ornate eight-arm wrought-iron candelabra, a pistachio-coloured antique rug laying on a wooden floor painted in the same pistachio green. Tables are placed at the edge of the room around a circular wooden table which rests on a stone base and whose primary function is a breakfast buffet (which is then loaded with lilies, glass bottles of fruit juice and tin caddies filled with breakfast cereal). There’s also a chef’s table dinner party option in The Gatehouse. 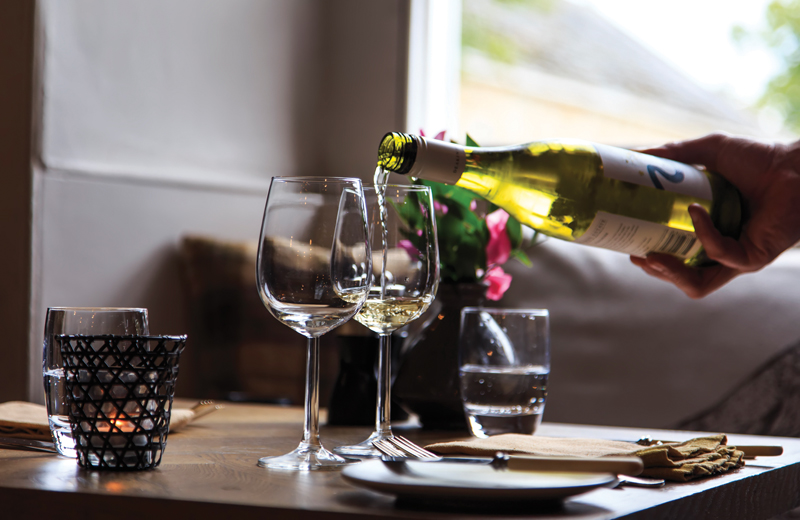 In the absence of head chef, Simon Hicks, Sous Chef Carl Purvis produces punchy, robust, British cooking, rich with flavour and delicious combinations: creamed sweetcorn soup with woodland mushrooms; mixed beet salad with watermelon and barrel aged feta. I’m convinced Chef Carl prepared by my cod using the sous-vide method as I’ve never before tasted such succulence, but he insists it was merely pan-fried then presented with a wheat salad, roasted courgettes and green sauce. Some of the ingredients come from the walled kitchen garden and everything else is from authentically sourced local suppliers. 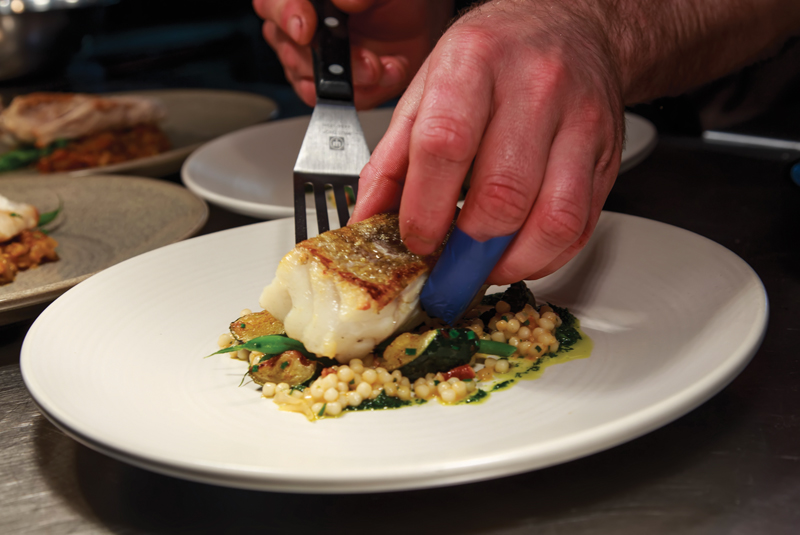 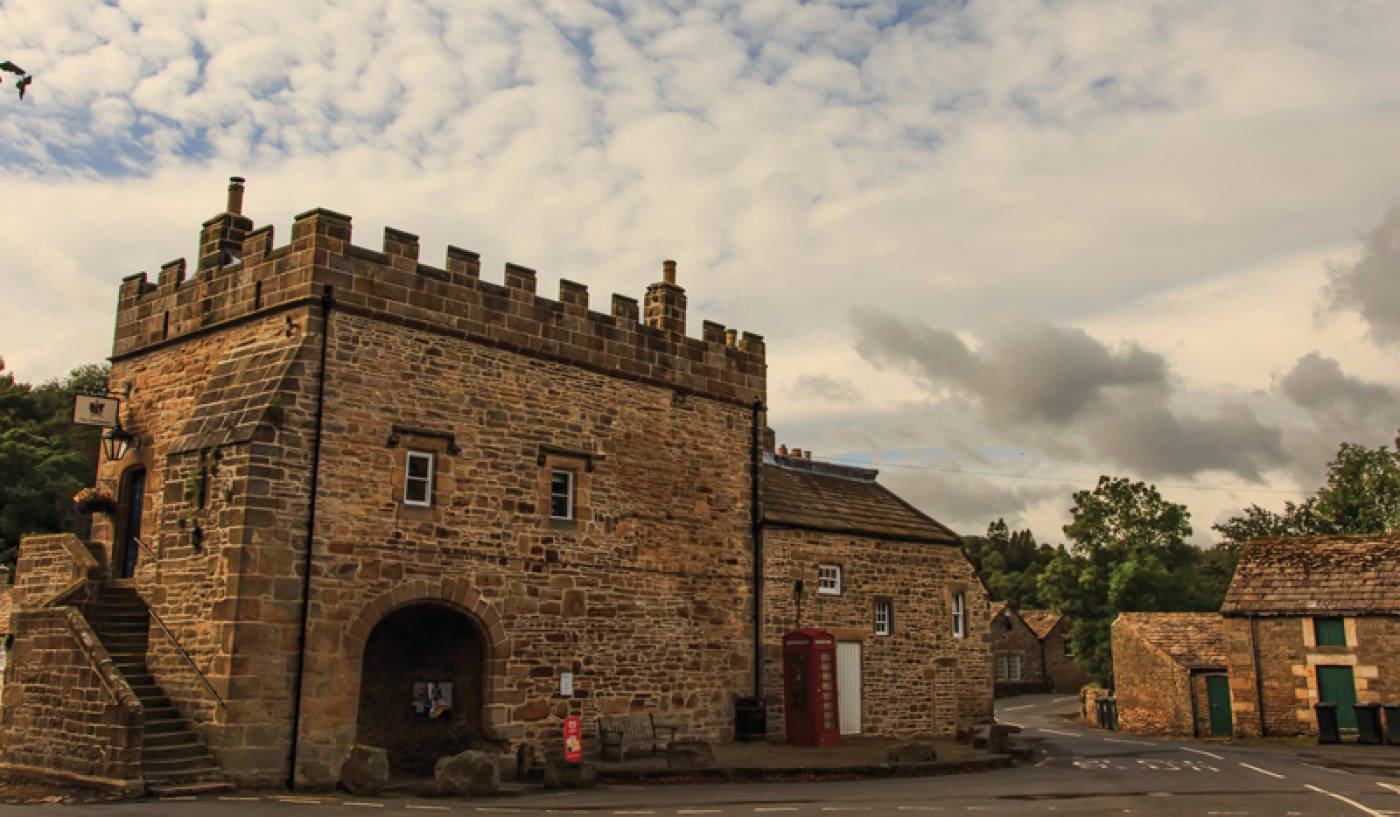 The Lord Crewe Arms is a rare example of a place that’s got everything right, complete with friendly staff who all live locally and are a great source for advice and tips. The pub, the restaurant and the hotel make the most of its historic setting while resisting any heritage vulgarity. It’s distinctive, chic and transports you to a world of old. Monk or not, it would make a wonderful festive break. So, get a room if you can.

Joining the Great Barrier Reef and Yellowstone National Park as a designated UNESCO World Heritage Site, Hadrian’s Wall (the best-preserved frontier of the Roman Empire and the nation’s finest Roman monument), is one of England’s greatest landmarks. Hadrian’s Wall leaves a lasting impression on any who visit, including writer George RR Martin who used it as inspiration for his own Wall in the bestselling books and hit TV series, Game of Thrones.

Getting there: Durham is an amazing county in north East England, just three hours by train from London, and less than two from Edinburgh, plus Newcastle and Durham Tees Valley international airports nearby. 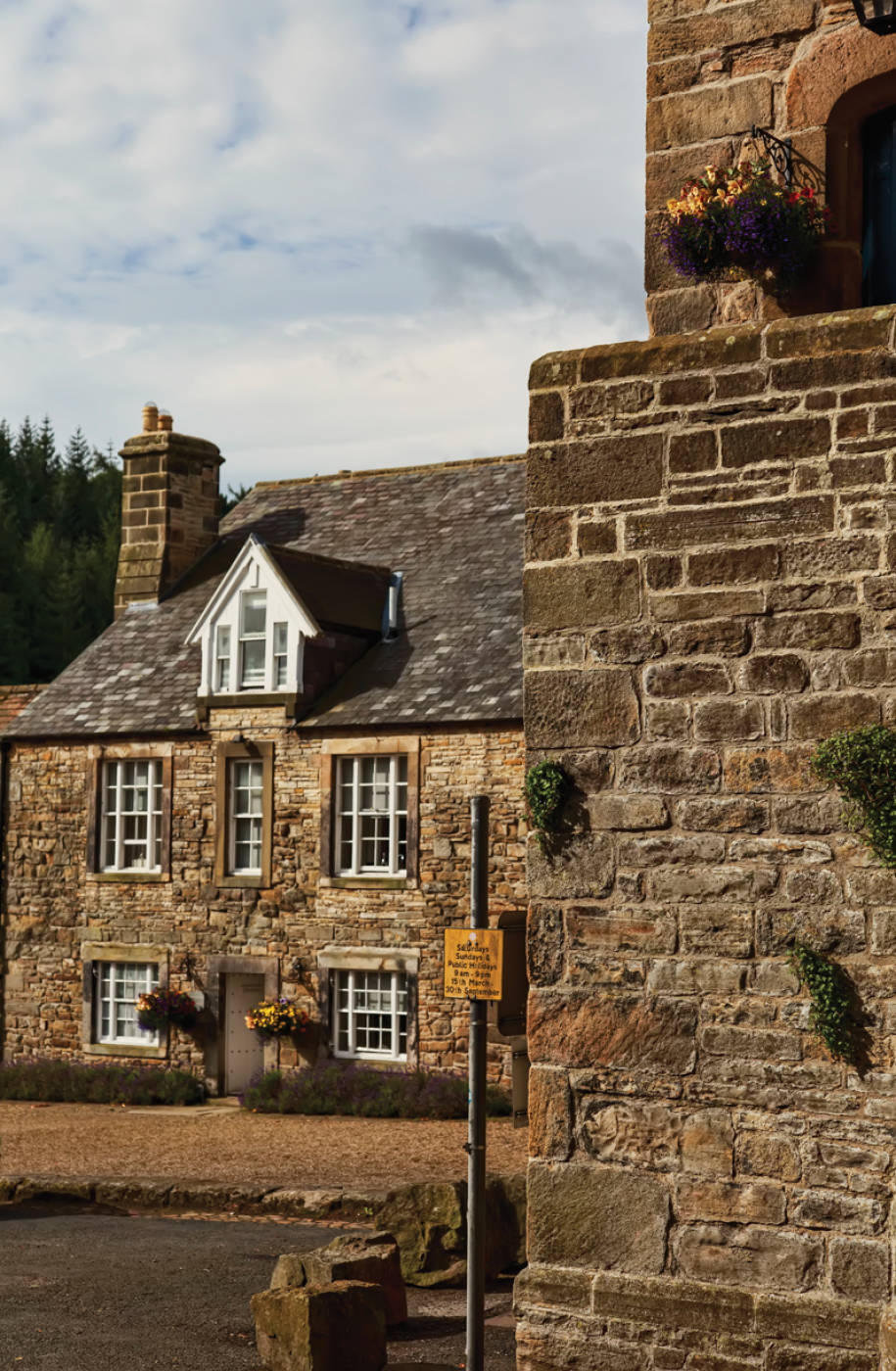