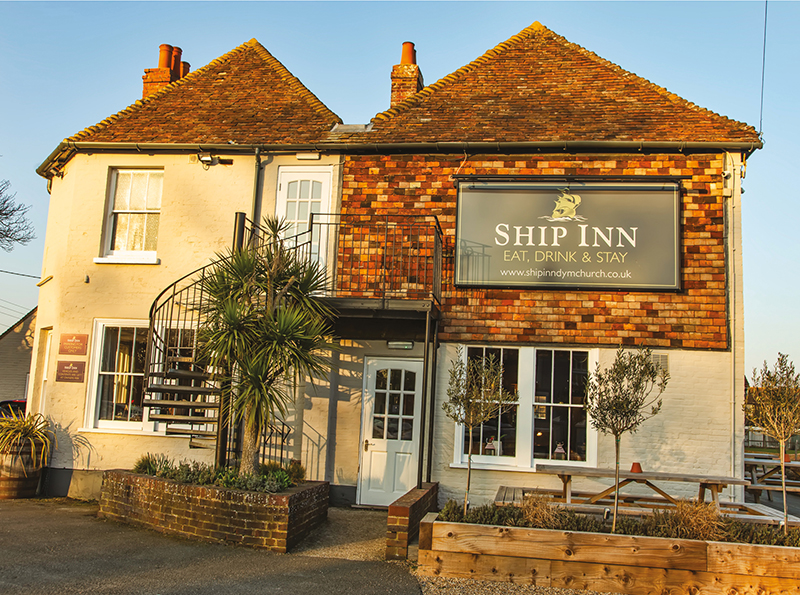 Steeped in shadowy history, the Ship Inn first enters the historical record of Dymchurch near 500 year ago, at a time when smuggling was common practice along the south-east coast of Kent. This, in part, was due to the Romney Marsh being given the right to self-governance by King Henry III.

Across the road from the Ship Inn is the parish church of St Peter and St Paul, a charming little Norman chapel, built around 1150. Constructed from the same Caen stone as Canterbury Cathedral, and filled with Kentish ragstone, it’s remained virtually untouched for close on 900 years, save for fenestration changes and the addition of two large buttresses.

» Dymchurch has a blue flag awarded sandy beach, surrounded by miles of flat countryside, which is well suited to walking and cycling. There’s an Amusement Park filled with amongst others, Dodgems, a Ghost Train, and a Log Flume, which will keep kids of all ages entertained.

» A couple of miles further is the historic sea-side town of Hythe, famed for its narrow-gauge Romney Hythe & Dymchurch Railway, which is one of Kent’s top tourist attractions.

» Should you be in the historic harbour town of Rye, be sure to visit the King’s Head (www​.king​shead​rye​.co​.uk), the Ship’s sister Inn.

» Every two years Dymchurch holds a pageant during the August bank holiday weekend called the Day of Syn, which sees the locals dress up in period costumes. The event ends in an exciting battle on the beach between the smugglers and the revenue men. The Parish Priest attends, dressed as Doctor Syn, and leads a traditional 18th century church service.

» Be sure to catch the Ship Inn on the popular ​‘Four in a Bed’ daytime television show. It’s scheduled to broadcast in the next few months.

Dymchurch is home to the fictional smuggler known as Doctor Syn, who was written up as the rector of the parish church where it’s author, Russell Thorndike, is buried. The smuggling/tax avoidance story idea was based on actual events surrounding 18th century night-time rustling of brandy and tobacco from France to the Romney Marsh and includes details of battles fought between rival smuggling gangs, local militias and the British army. The fictional Doctor Syn’s headquarters was the very real Ship Inn.

The Ship Inn, a family run business, has recently been restored in its entirety and provides all the necessary mod-cons expected in the 21st century. During its extensive renovations, hidden passageways and voids were discovered behind panels and closed-off doors. The centuries old smuggling history of the Ship Inn is quite literally engrained into the fabric of the building — a theme the owners have maintained by displaying various framed items of smuggling interest on the walls.

Arrive at the main entrance and step into a welcoming lobby – directly across from the entrance door is a steep flight of steel-grey deep-pile carpeted stairs leading to the accommodations. To your right are a couple of comfortable arm chairs and a wood-burning fireplace, beyond which is a spacious eating space, which is beside a bespoke 12-seater special events dining room. 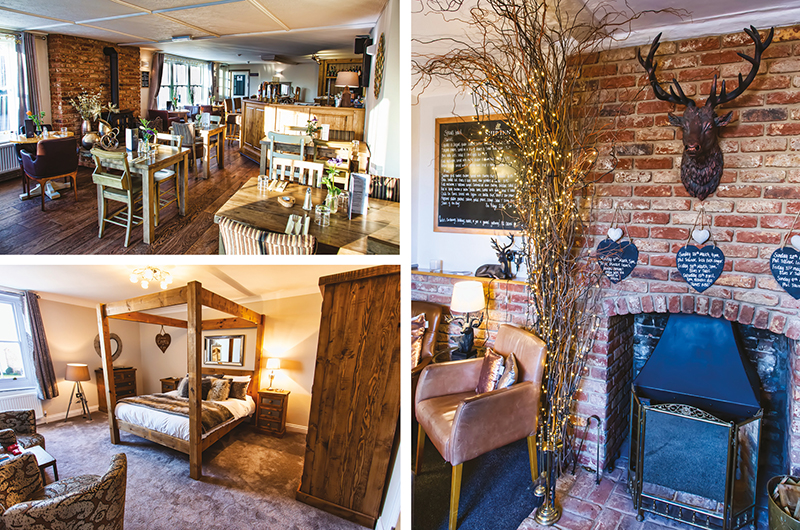 To your left is the intimate back bar with its elegant oak counter, illuminated by three low-hanging brass light fittings, and furnished with biscuit-coloured leather sofas, striped armchairs and several oak dining tables and chairs – some brown velvet, or tan leather, others oak. At the end of the room step up into the spacious front bar with its long oak counter, open wood-burning fireplace and even more dining tables and chairs.

The décor throughout is contemporary with modern chandeliers, Manhattan Grey and White Whisper Johnstone walls, oak ceiling beams and floors and offset by dove-grey drapes which frame tall sash-windows.

As the day draws to a close the Ship Inn takes on a different persona and becomes particularly stylish thanks to the mood lighting and hushed conversation. During the summer months the patio garden, with its up-lights in the trees and shrub, is particularly popular.

It’s all very refined, elegant even, and is a lovely place to stop off for a drink, be that a local award-winning Real Ale, a fine wine or one of their +20 gins. Be sure to have Ian prepare you a Hendricks Gin with cucumber and Elderflower tonic. Mind blown! 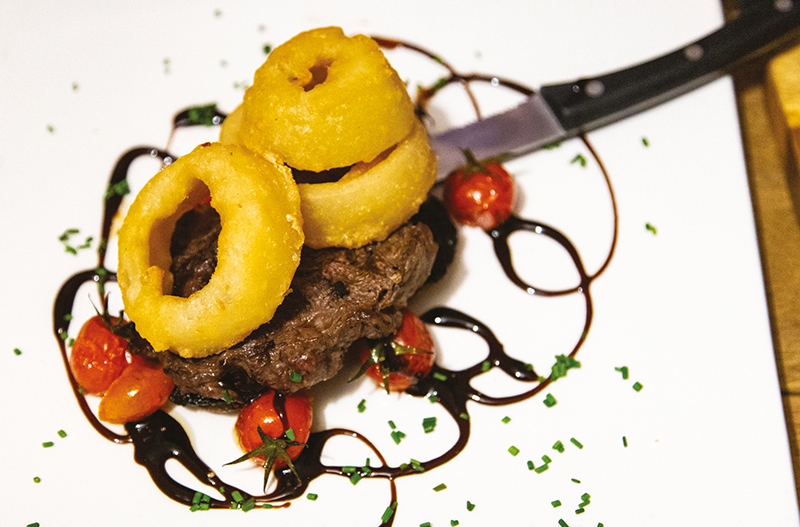 And if you’re hungry, their restaurant serves good pub food in generous portions; their Specials Board promises an interesting diversion from the regular menu and includes local seafood-rich produce. However, you can’t go wrong with the rib-eye steak. For me, my Achilles heel is the dessert menu. I could eat my own bodyweight with their black cherry panna cotta, sticky toffee pudding, butterscotch treacle, berry pavlova, lemon roulade, chocolate brownies, rhubarb frangipane, and pecan pie — and I think I may well have.

Upstairs are five individually styled luxury rooms – the Four Poster room especially so with its ​‘upstairs’ roll-top bath and Elsyl eco-friendly toiletries. The room itself is understated with Seashell coloured walls and a thick grey carpeted floor. The luxury four poster bed itself will reward you with a sound night’s sleep, amidst a collection of furry cushions, a faux fox fur throw and crisp white Egyptian cotton linens. A free-standing tripod light, which stands beside a sash window draped in thick silver curtains, casts a soft light across a couple of silver-bronze circular chairs and the crucial midnight requirement of in-room tea/coffee making facilities.

Seeking penance for my dessert sins I take an early morning wander across to St Peter and St Paul Church and marvel at its ​‘bent’ tower. In the churchyard, with several tombstones tellingly adorned with the skull and cross bones symbol, are two eye-catching grave stones – Solomon Pepper, a character in the Doctor Syn books and Charles Keeley, a smuggler killed near the Ship Inn by midshipman Richard Morgan who was himself killed by a fellow smuggling gang soon thereafter. Atonements paid I return to the Ship Inn for a breakfast experience which is especially good with a small menu that promises a perfect start to the day.