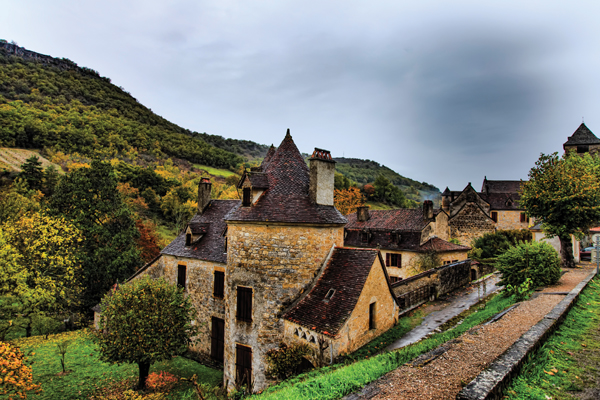 The Black Diamonds of France

A weekend in the Dordogne, truffle hunting

In the ancient village of Péchalifour, in the Périgord countryside, is Truffe en Perigord – the 10-acre truffle farm of Edouard Aynaud, the local trufficulteur.

In an animated and informative discussion Edouard explains the story behind the highly fragrant truffle, which is one of the world’s most expensive foods. 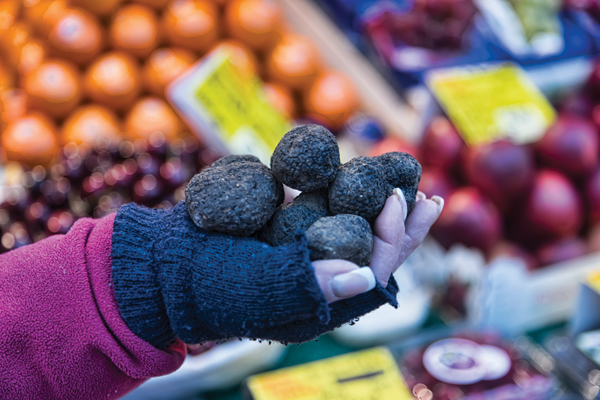 “It’s the black ball of fruiting fungus that grows in the Jurassic soils of southern France,” he says. ​“It wraps its spreading fibres onto the root system of oak and nut trees, benefiting both the tree and the fungus.”

He gives a detailed account of its history and the science behind truffle cultivation, then grabs a basket, containing dog treats and a digging tool, and begins a spirited trek through the trees. Our posse of expectant truffle hunters set off in pursuit of his enthusiastic truffle hunting dogs. His retreating figure announces that, whilst still puppies, his dogs were trained to recognize and search for the truffle scent.

Born in Belgian Congo, Edouard began his working life as a goat farmer in Tunisia, then in the Périgord he produced foie gras. In 2002 he took over his father’s truffle enterprise.

Striding slightly ahead of us, Edouard sees the telltale ​‘burn’ around the base of a tree, and gives one of his dogs the command. Within seconds, the dog sniffs and puts his paw on a spot. Edouard scoops up a handful of the moist soil and sniffs it, crowing jubilantly when he detects the scent of the hidden truffle. A little digging and voila! There it is — a tennis-ball sized truffle!

“The best months for harvesting ripe truffles in the Perigord”, says Edouard, ​“is December through to February – and then only if the weather conditions have been favorable.”
www​.truffe​-perig​ord​.com 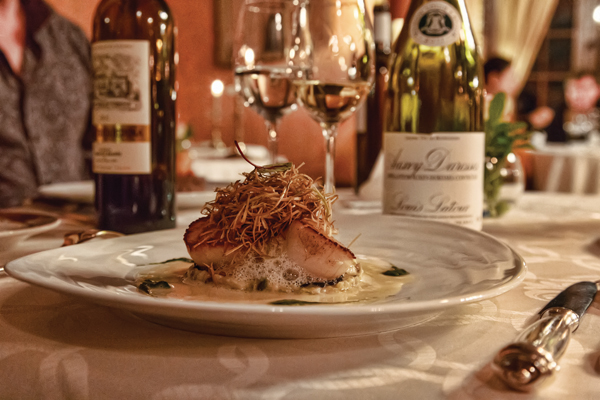 A few miles west of Edouard’s truffle farm is Trémolat, a picture-perfect village that exudes rustic charm. In the centre of the village is Le Vieux Logis, formerly a 16th-century priory, now a classic limestone Château with 23 individually decorated rooms and nine junior suites, spread across the hotel, several cottages and numerous outbuildings.

Inside the former tobacco drying barn converted into a dining room Chef de Cuisine, Vincent Arnould, takes full advantage of the local produce, providing refined food of the highest quality. The eight-course tasting menu, paired with some of the region’s best wines, is exceptional and is delivered flamboyantly by the straight-talking maitre d’. Grilled Quail with coffee cream, roasted sea bass with sea urchin, puff pastry and praline walnut ice-cream – every bit deserving of their Michelin star. Their unique ​‘Nontron’ dinner knives added a historic touch and the elaborate cheese chest containing at least a dozen oozing cheeses is a show on its own.

The tranquillity beside the roaring fire in the front lounge gives the hotel the feel of a very comfortable inn. Even more so when the concierge ensures the steady flow of coffee and cake and port. Prices start from Euros 200/room and include all the modern-day creature comforts (ask for Room 1). www​.vieux​-logis​.com

Capture the early morning mist at the base of the Alzou canyon above which rises the hilltop town of Rocamadour. Here the houses cling to the cliffs, above which are churches, then rocks above the churches and on top of the rocks a castle. After a coffee head to Padirac and descend into its enormous cave network where you’ll be punted along an eerie subterranean stream, passing through underground caverns of remarkable rock formations. There’s just enough time to fit in two more romantic hilltop villages – Autoire, with its square pigeon-towers, brown roof tiles, limestone manor houses and Loubressac, festooned with pale-gold stone houses each boasting small flowery gardens, brown terracotta roofs with upturned corners and burgundy-coloured shutters. The streets wind upwards to a shady village square and its 12th century church. If nothing else, you must visit one of the traditional truffle markets – Lalbenque on a Tuesday afternoon and Martel on a Saturday morning. 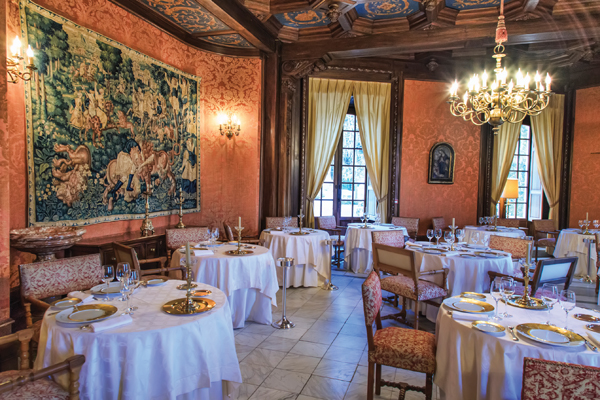 To take in the splendour of it all, be sure to arrive at Lacave by mid-afternoon. Château de la Treyne, a 14th century castle hunched at the edge of a cliff overhanging the Dordogne River, is quite spectacular. Over the past 30 years the château, which is primarily a home, has been painstakingly restored to its former grandeur. The formal French garden, enriched by 300-acres of private woodland, are strewn with ancient trees, romantic ponds, rose gardens and a sleepy chapel – which all give the estate irresistible charm. 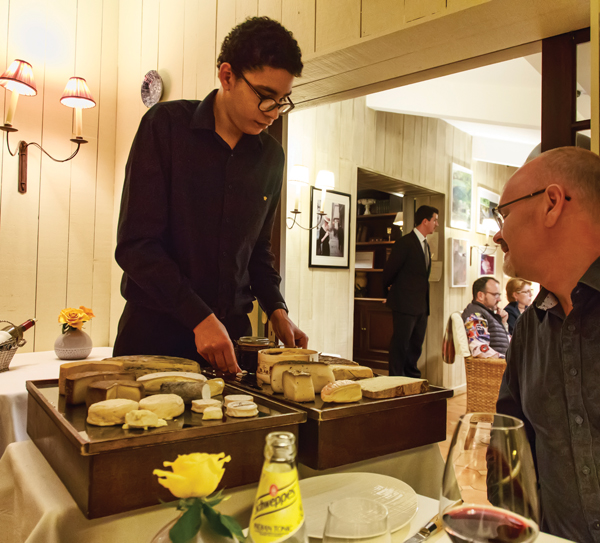 Every one of its 17 rooms brim with authentic period furniture, oil paintings and exquisite tapestries, providing a glimpse into the past life of the château. If you listen closely you can hear the tinkle of fine glassware, the shushing of evening gowns across the parquet floor and whispers of secrets being told behind fans. Gilt mirrors tell stories of sumptuous parties and stately guests, whilst glittering crystal chandeliers cast soft intimate light over priceless paintings and exquisite furnishings.

The Louis XIII suite is filled with refined décor and discreet luxuries. The room itself is rich in crimson and a dark parquet floor, priceless antiques, a giant canopied four-poster bed, plush wall fabrics and matching curtains which frame a jaw dropping view across the Dordogne River. On the dressing table are fresh roses and a temple to all things walnut – chocolate walnuts, walnut cake, walnut wine, caramelised walnuts, chocolates with a walnut liqueur centres.

Dinner in the palatial Louis XIII salon is an unforgettable experience. Owner Stephanie Gombert personally welcomes each guest and introduces the sommelier who suggests only the best Bergerac wines to accompany the regional cuisine – foie gras, Quercy farm lamb, truffles and walnuts. From the first amuse-bouche to the last sweet delicacy, it’s a culinary delight. Under the guidance of Chef de Cuisine, Stéphane Andrieux, the restaurant gained a Michelin star in 2001 but deserves at least one more. Breakfast is further royal experience: a large silver tray groaning under the weight of its delicacies – fruit juices, yoghurts, patisseries, breads, preserves, local cheeses, ham, freshly-made mini-quiches. 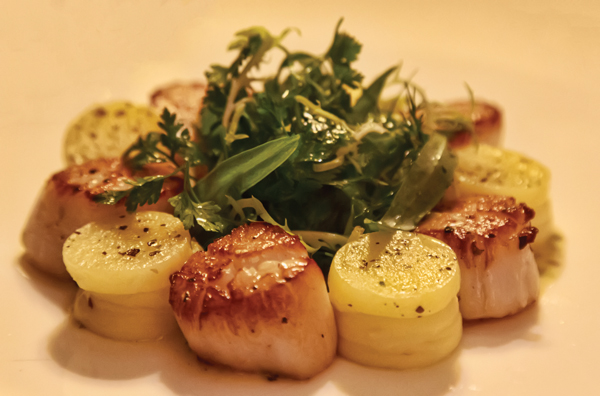 Luxury has become a much-overused word because luxury always needs to outdo itself. At Château de la Treyne luxury goes beyond opulence; here service is key and everyone is treated like nobility. This is not a place to rush things; sit beside the crackling fire, sip walnut wine and listen to Chopin softly playing in the background. Prices starts from Euros 300/room and include all the modern-day creature comforts. www​.chateaude​la​treyne​.com

Getting there
It’s an easy destination to visit from any London airport. Fly into Brive, Bergerac or Bordeaux with FlyBe, CityJet, Ryanair, British Airways or easyJet.