Wingham, with its broad tree-lined streets and medieval black-and-white homes, is a picture postcard village between Canterbury and Sandwich. It’s been in existence since the Stone Age but only became established as a village more than two-thousand years ago when the Romans invaded. Then came the Anglo Saxons, the Normans, followed by the Tudors, who restored order. Many of Wingham’s buildings date back to this time, including the Grade II listed Dog Inn.

Following years of neglect, the enterprising Bridgen family, who live locally, bought the freehold in 2016, then set about restoring the ancient building to reveal a contemporary and stylish gastropub with rooms.

Inside the formal lounge it’s soft hues of steel grey and blue, upholstered chairs mixed with original timbers and an inglenook fireplace. Red and yellow-back leather tub chairs (complete with an embossed dog motif) add a shock of colour, whilst cow-hide chairs and bar stools in the dining room add an element of funkiness. 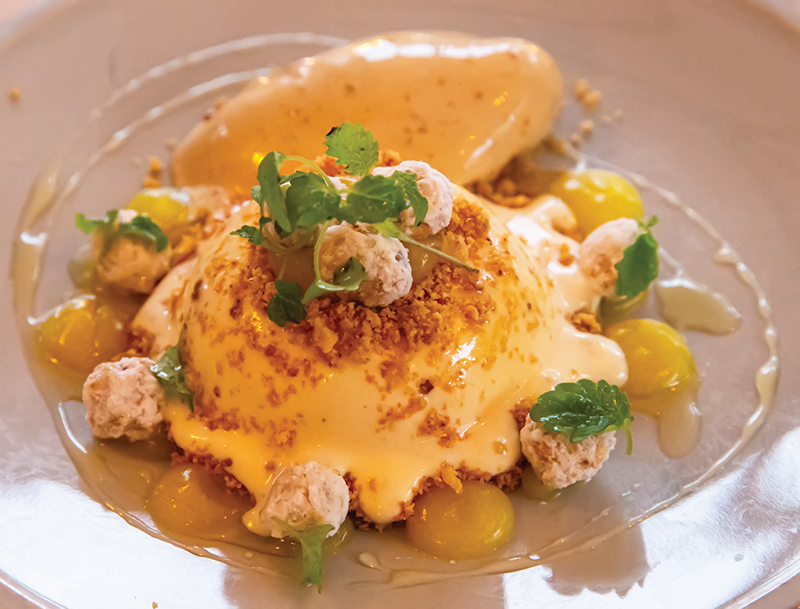 The three talented chefs in their award-winning restaurant have put this gastropub on the map as people come from miles around to experience their modern British cuisine. You’ll love eating their amazing food, starting with smoked hock and pancetta terrine, apricot ketchup, piccalilli with toasted brioche or the locally sourced rib-eye steak with thrice fried parmesan chips. What is particularly good is their extensive vegan menu options. I thought I’d gone to heaven when I tasted the warm coconut and cardamom rice pudding with muscovado sugar.

The menu is seasonal and changes regularly, reflecting quality produce available from Kent-based suppliers like bread from Wingham Bakery, a couple of miles away is Chapman’s for fish , Jim’s butchers in Whitstable for meat, up the road there’s TJs Fruitier for fruit and vegetables, free-range eggs from Canterbury’s Coastal Farm Eggs, Curd & Cure in Staplehurst for artisan cheese, Turners in Canterbury for wild local game.

Senior Sous Chef, Robert Mantegna, draws on global flavours and his Italian-Egyptian heritage. His Italian grandma instilled in him the love of food. ​“As a child I recall visiting my Nan’s, who was always in the kitchen, and watching her make Gnocchi and Basbousa – a traditional Egyptian sweet cake, made from a semolina batter and sweetened with an orange flower water syrup.”

“Other than my Nan, a chef who I have followed from the start of my career is Pierre Koffman, known to many as the ​‘Godfather of Cooking’. His signature dish was stuffed pig’s trotters – a true classic, from his days at La Tante Claire, where he held three Michelin stars. He would slow cook the trotter in veal stock and a mirepoix of vegetable until tender, then he would stuff the trotters with veal sweetbreads, chicken mousseline and morel mushrooms, then serve it with crispy pig’s skin and pomme purée. Chef Koffman would take an ingredient that was regarded as waste and create an example of what can be done with cheaper ingredients.”

Chef Robert’s speciality dish is lobster raviolo with bisque espuma and leek etuve. ​“I have learnt from the best how to make a good ravioli, and given it a twist, which has been on the menu for more than nine months. Our customers love it.”

There’s no disputing the fact that the food at The Dog is of top London restaurant quality; the only City ingredient that’s missing is pretentiousness and city prices. Not surprisingly they’ve won two AA Rosettes for Culinary Excellence. 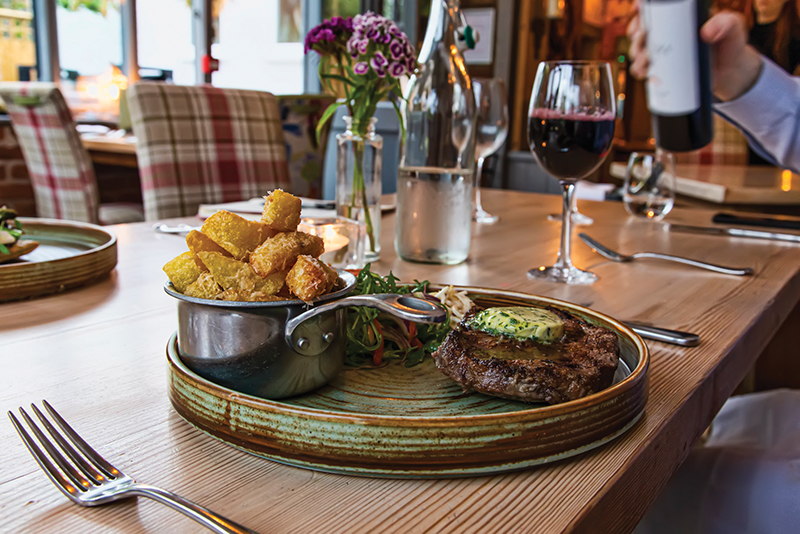 To go with your dinner, expect an eclectic international mix of well-chosen wines, which includes some cracking ones from South America and local fizz from Barnsole Vineyards.

Behind the bar is Rhys, the fountain of all knowledge regards gin – of which they have a vast collection. They even have regular gin events, including adventurous food pairing. They’ve won the National Pub & Bar Awards two years in a row. Other than the wine and gin they do like to focus on locally brewed real ales. 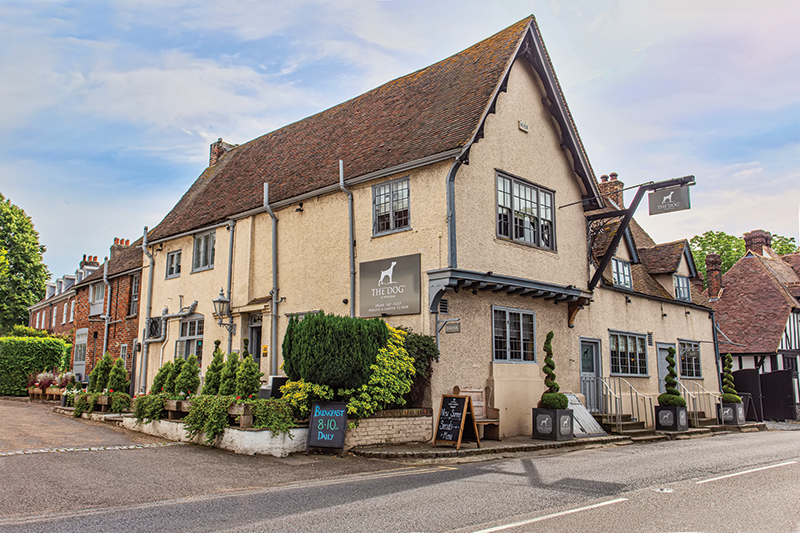 A creaky staircase leads to six super-smart rooms above the restaurant. They range in style from boutique doubles, to a lovely family suite, and a spectacular four-poster bridal suite with a vaulted beamed ceiling. In the adjoining Doghouse (accessed via the terrace) are two more suites. All are elegantly dressed in the most sumptuous of fabrics, crisp white linens, Taylor of London toiletries, and of course, the most comfortable beds in the world – Hypnos posture support mattresses.

Ask for Room 3, which has loads of space and charm and showcases the age of the building with its open eaves, exposed timbers, striking green fabric headboard and a funky tiled wet room.

Wake up to the knowledge that a dream breakfast awaits in the conservatory at a table set with fresh garden flowers. Think smoked salmon and crème fraîche scrambled eggs on toast; black pudding with a full English; a muffin with poached egg on top, smoked streaky bacon & hollandaise sauce; crushed avo and a poached egg on toast.

I’ve read many a review where staff are highly praised, but I’ve seldom seen it in action. What I’ve seen at The Dog is that the hands-on approach brings with it attention to detail, yielding numerous local and national awards. The professional fresh-faced staff, led by Liane, have created a buzz to the place. When you leave, you’ll feel you’ve been included in The Dog family, with whom you’ve formed deep friendships.