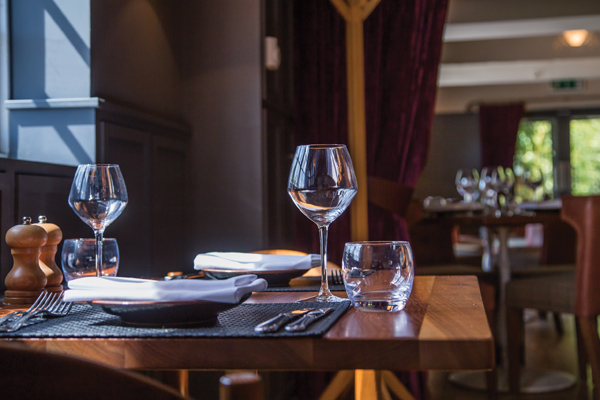 Clive Agran reviews an uplifting evening at The Curlew

There was a time, not all that long ago, when the words ​‘English’ and ​‘wine’ would rarely appear in the same sentence let alone alongside one another. Once an oxymoron, ​‘English wine’ is now a burgeoning industry and an invitation to an ​‘English Wine Dinner’ a cause for celebration rather than derision especially when, as in this case, it was to be hosted by the marvellous Curlew restaurant just south of Hawkhurst on the East Sussex/Kent border. 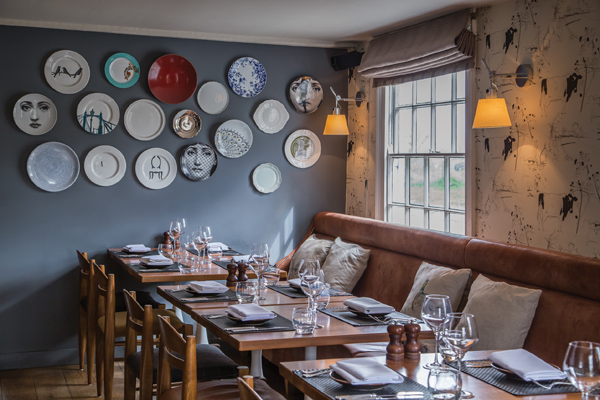 A welcoming glass of rhubarb-flavoured gin struck precisely the right rather eccentric note as guests gathered in the cosy entrance to this exceptional establishment before drifting through to the main body of the restaurant.

I was seated across the table from Daniel, a charming graduate of Plumpton College. Nothing unusual in that, you might think, but his specialism wasn’t sheep or wheat, it was wine. Did you know Plumpton College is Britain’s centre of excellence in wine education, training and research, has a nine-and-a-half hectare vineyard, a commercial winery, a wine research centre and is the only higher education institution in Europe to offer undergraduate degrees in Wine Business and Production in English? How much more fun is that than the dull Politics I studied in the early 1970s? Vines over Voltaire every time.

After a couple of glasses of sparkling rosé from Bluebell Vineyard Estates in East Sussex, I was definitely in the mood to sign up for a post-graduate course and was about to ask Daniel how I should go about it when a cheery bloke from Bluebell rose to his feet and talked knowledgably about his wine. What struck me most was how much more there evidently is to growing grapes than I had previously imagined. Although moderately successful with broad beans and potatoes in my modest vegetable patch, I’m not sure I’m quite ready for viniculture. Putting post-graduate thoughts to one side, for the moment at least, I instead concentrated on enjoying the wine and the sensationally tasty veloute of asparagus that accompanied it. 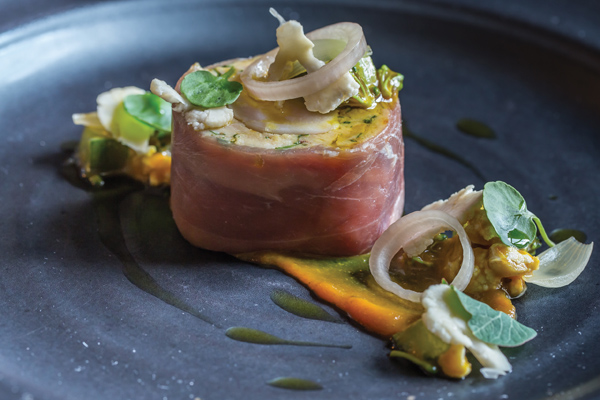 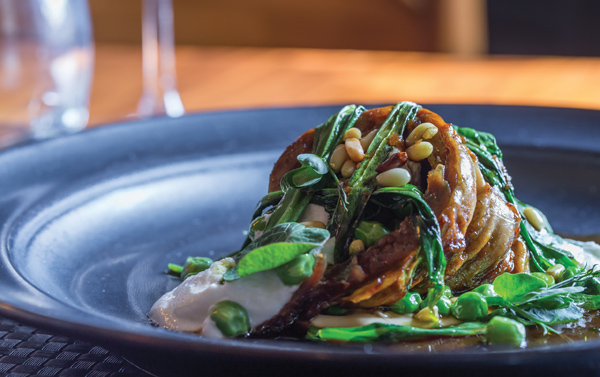 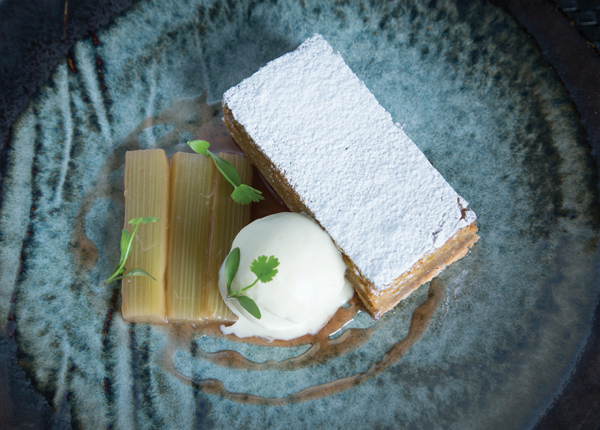 Next up was an incredibly delicious confit of wild salmon, sea vegetables and oyster washed down, if that’s an appropriate expression, with a glass of Gusbourne Guinevere. Produced on a comparatively small estate in Appledore, this wonderful white wine was outstanding. Again, a helpful chap from the vineyard leapt to his feet, talked about the wine and answered questions from increasingly cheerful diners. There is real risk when discussing wine of lapsing into pretentiousness but, thankfully, this pitfall was avoided and the chat was both informative and genuinely interesting. 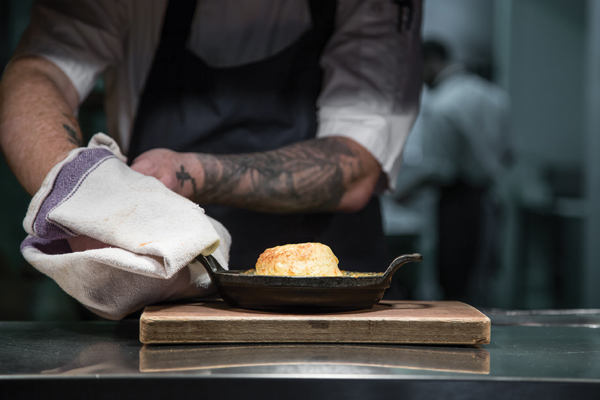 Just as I was beginning to wonder whether all the wine produced in England was either white or rosé, a splendid glass of red was poured. Produced in Sedlescombe, which is just down the road from the Curlew, it was deep purple, pretty full-bodied and went wonderfully well with the delicious slow-cooked lamb, fir apple potatoes, caper and mint.

A gentleman from Sedlescombe Vineyard briefly talked about the wine and, as someone who is ordinarily inclined to rush his food, I was rapidly developing an appreciation of these regular pauses, which allowed time for both reflection and digestion. Perhaps my wife and I should try something similar at our next dinner party and invite a representative of, say, Waitrose to punctuate each course with a bit of background. 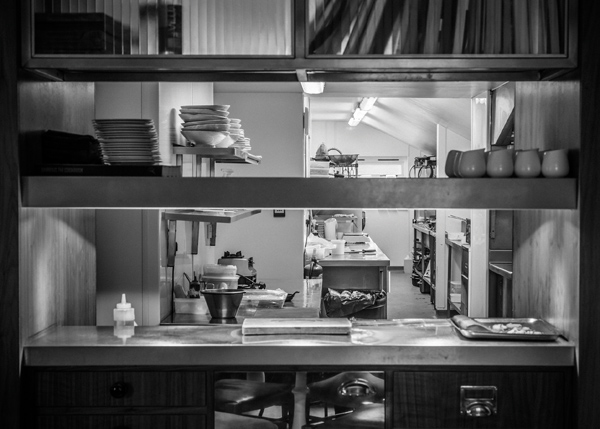 If the French are concerned that our wines are threatening their historic superiority, they would worry even more about their cheese if they had been in the Curlew tasting the Sussex camembert from Alsop and Walker.

There was one last wine to savour that accompanied an amazing strawberry parfait, lemon curd, basil and meringue. Because there are various diseases that grapes are especially prone to, producing organic wine is particularly problematic. But that evidently hasn’t discouraged the brave folk at Oxney Organic Estate in Beckley, East Sussex. Whatever extra effort it required to produce their rosé was certainly worth it because it was yet another exceptional wine and somehow captured the taste of an English summer.

Fearing that I might now be slipping into precisely the pretentious twaddle about which I spoke several glasses ago, I should perhaps just finish my coffee and petit fours, thank the lovely people at the Curlew for a truly memorable evening and allow my sober wife to drive me home. 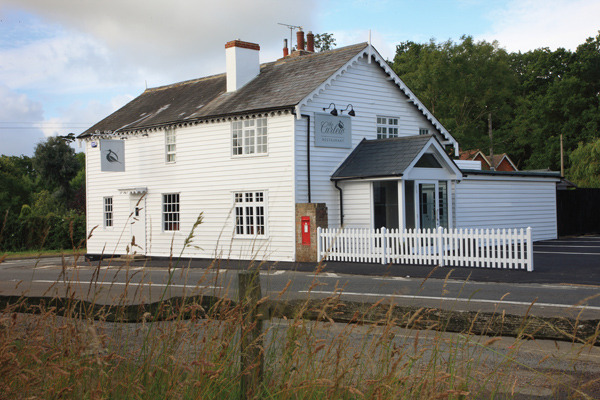