The extreme South East edge of England – the bulge closest to France and where Caesar first landed in 55BC – isn’t a place people tend to linger. You see, this is the launchpad to Europe. They hurtle across it on the Eurostar, drive through it to catch the Dover ferry, or queue along the M20 on-route to the Channel Tunnel.

A few miles outside Dover – Britain’s biggest passenger port – in the tiny rural village of Alkham, were I pulled in at the Marquis of Granby – a classy gastropub, with rooms. 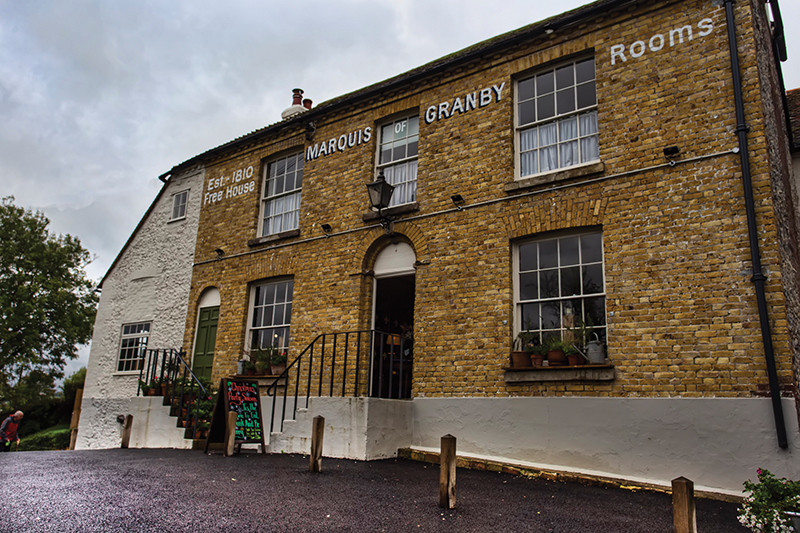 The 200-year old village Inn, a Grade II-listed building with sweeping picturesque views across the Alkham Valley, is hunched over by a 12th-century church, and has long been at the centre of local life. In recent years it’s undergone extensive renovations replacing sticky carpets and juke boxes with polished oak floors and original beams. Earlier this year it had a further refurbishment and rebranded itself more as a traditional yet high-end, dog-friendly pub, with outstanding food.

Drink & Dine: In the dining room the vibe is calm and unhurried, the décor bespoke with a central log fire and a brass flue, a historic brick and timber wall, green benches with plump cushions, antique tables and mismatched chairs, low-hung lighting, antique rugs, enormous gilded mirrors, historic paintings, plus flooring in both brick and parquet.

The bar, which has a central wall of hanging wine glasses, is built around period carved cupboards. There are branches of hops suspended from the ceiling and four good local ales on tap. There’s a giant Accordion Bellows table (with the characteristic pleated sides), an olive-green Georgian fireplace, an assortment of mismatched tables and chairs, a replica Spitfire hung on the far wall, and for visiting dogs there’s an under-counter basket and a water bowl. When the weather’s warm, you can take yourself outside to the terrace. 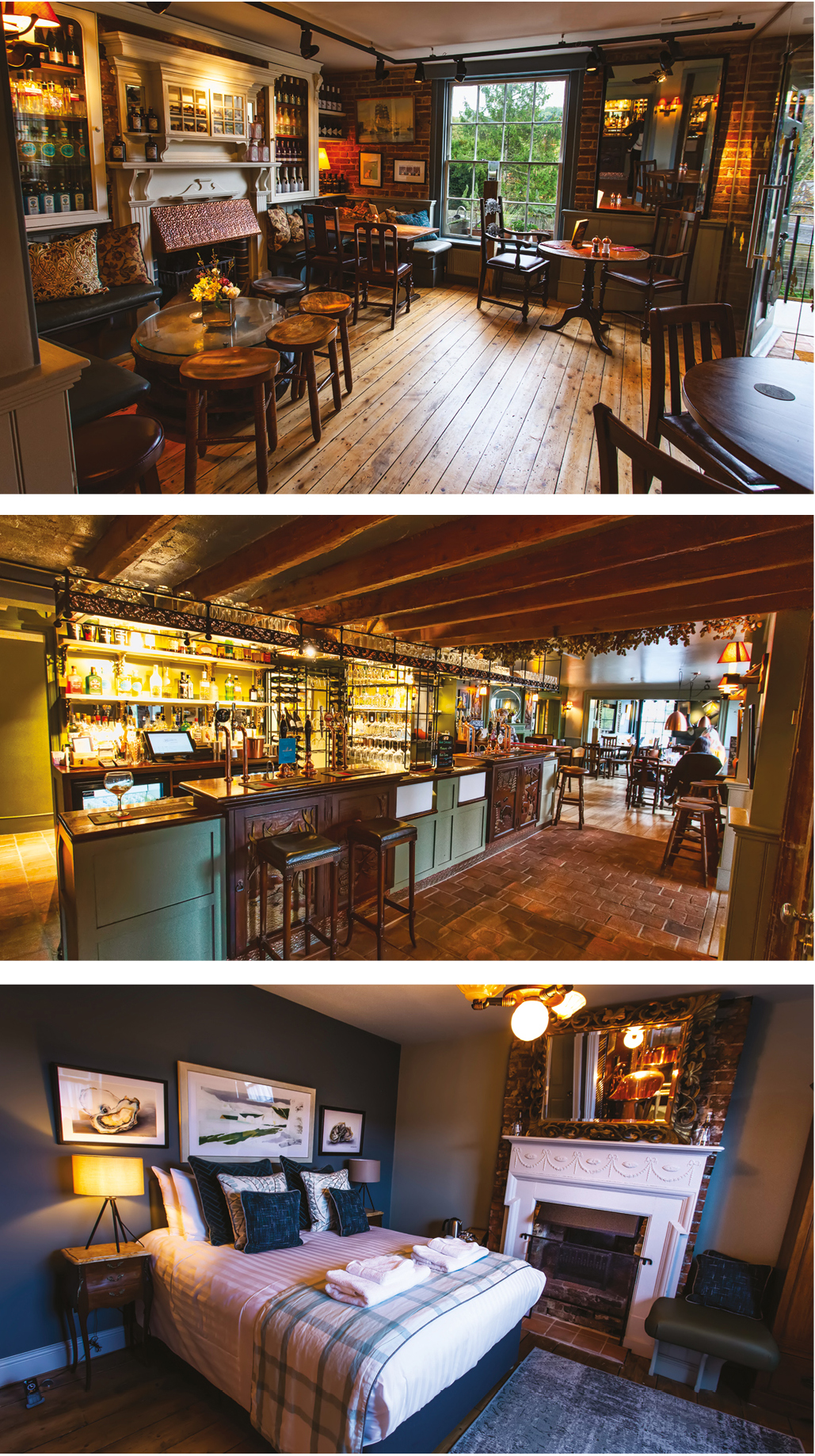 The menu is focussed on seasonal, local produce. Starting with mild Moroccan spiced lamb encasing a kofta scotch egg (the meat comes from Gunne Butchers in Bexhill-on-Sea), which is served with goat’s curd and mint salsa. Then it’s local skate wing (from P&H Fish in Hastings), black chive butter, brown shrimp, with lemon – ingredients that get on well together; and for dessert, pistachio and raspberry tart. Head Chef, Steve Piddock, regularly acquires his ​‘fish of the day’ from local fishmongers in neighbouring Deal and Whitstable.

Sweet Dreams: Each of the ten rooms, named after local places and people, have their own distinctive design theme – just oozing personality. Like my traditional ​‘Collard’ which is Farrow & Ball’d throughout in dues of blue and grey. The floorboards are original, as is the tall Georgian fireplace above which is a gilded mirror. There’s an antique wardrobe, tripod bedside lamps, black-out drapes over sash windows, beneath which is a window seat offering breath-taking valley views.

The open-plan bathroom with its double width-entrance is a showstopper. The ​‘Incarnadine’ ruby red wood-panelled walls add depth, a floor to ceiling gilded mirror brings drama, the high-sided brass bath adds opulence. There’s a his and hers basin – each sitting atop a table that’s been sawn lengthwise and tacked to the wall, which adds a little quirkiness. On the practical side there’s a separate shower room and loo, complete with a luxury toiletries collection and thick bathrobes. Back in the bedroom, with its over-sized bed dressed in hotel-quality white linens, is a service tray, a wall mounted TV, free wi-fi, and the subtlest of mood lighting.

It’s a shame that so few know about this ancient corner of England. There’s much to recommend like the muddy lanes, crumbling castles, authentic pubs – a snapshot of many of this country’s finer points, including James Bond.