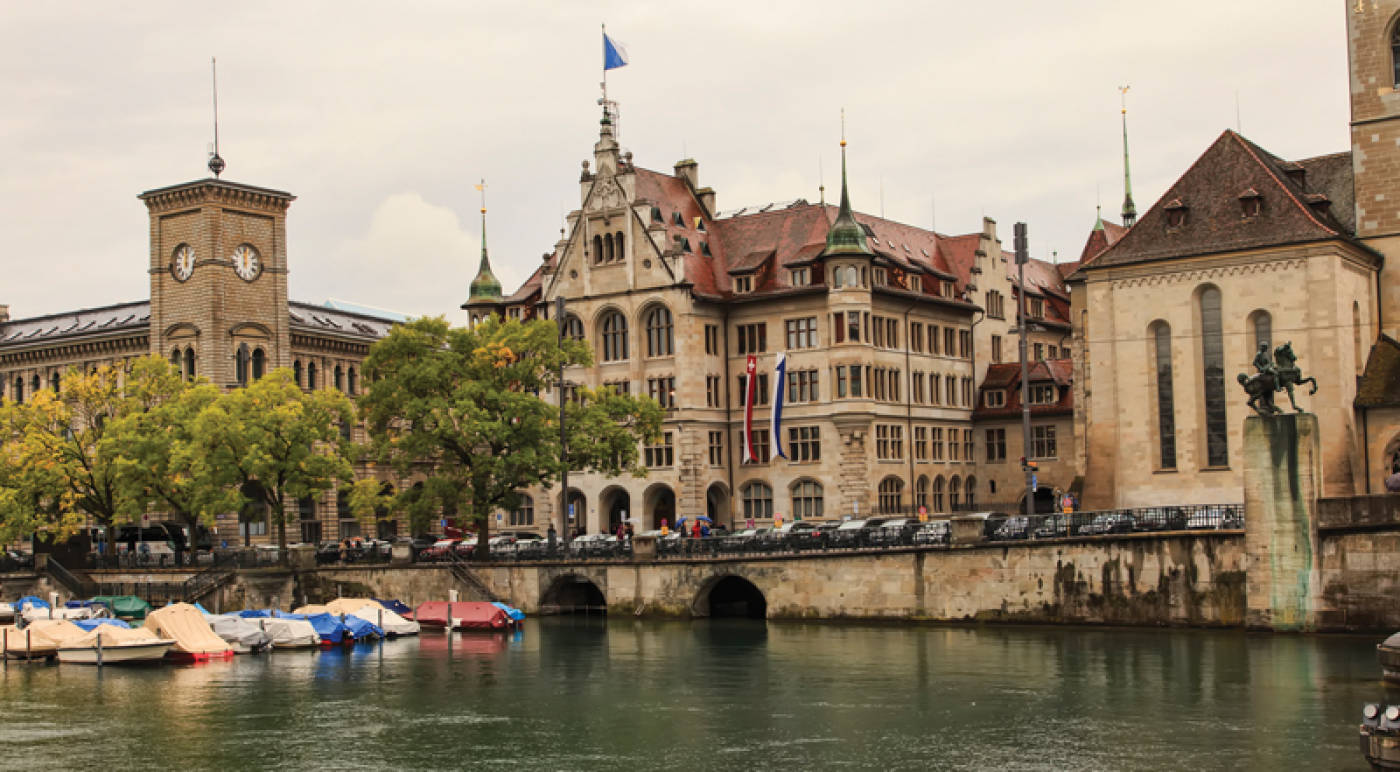 Zurich West – The hip, the hop and the hungry

For most of the past hundred years, Zurich-West has been known for its heavy industry, churning out turbines, engines and ships. Then, in the mid-90s, as factories moved out, contemporary art galleries, museums, and design shops moved in, popping up amid abandoned factories. This former industrial scrubland has created a gritty haven for the Zurich’s pioneering sub-culture, complete with a design university housed in what was once a yogurt factory.

Thirty metres above my head a metropolitan train is trudging towards Zurich’s Hauptbahnhof station, transporting commuters to their busy offices in Switzerland’s financial capital. Down here, in the 52 arches of the Im Viaduct, it’s all about the food. Back in the 1890’s the 500-metre long viaduct was an industrial estate and a ship building plant; but now the Im Viadukt has repurposed itself, filling the spaces beneath the railway arches with a culinary melting pots of local produce. 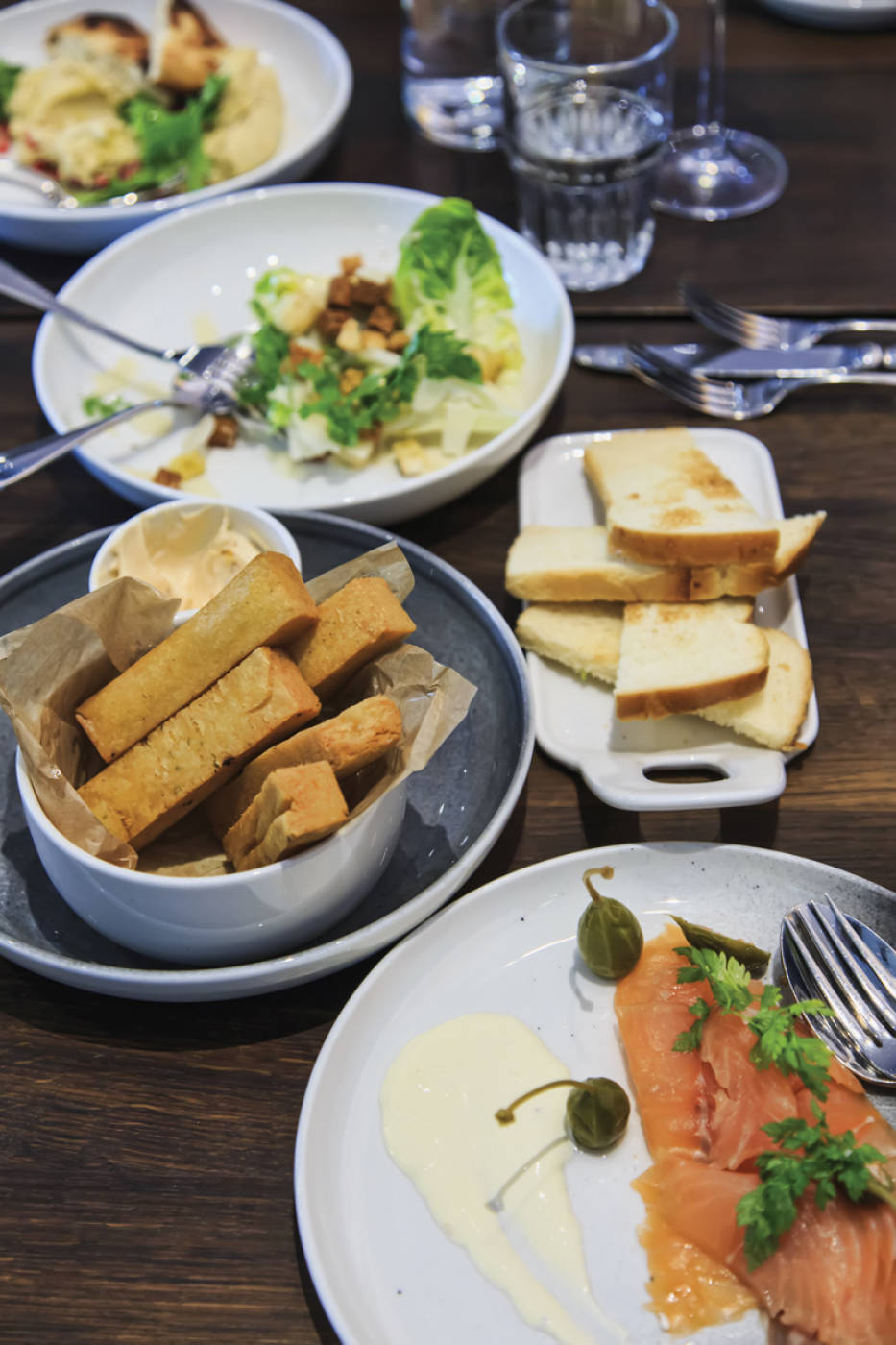 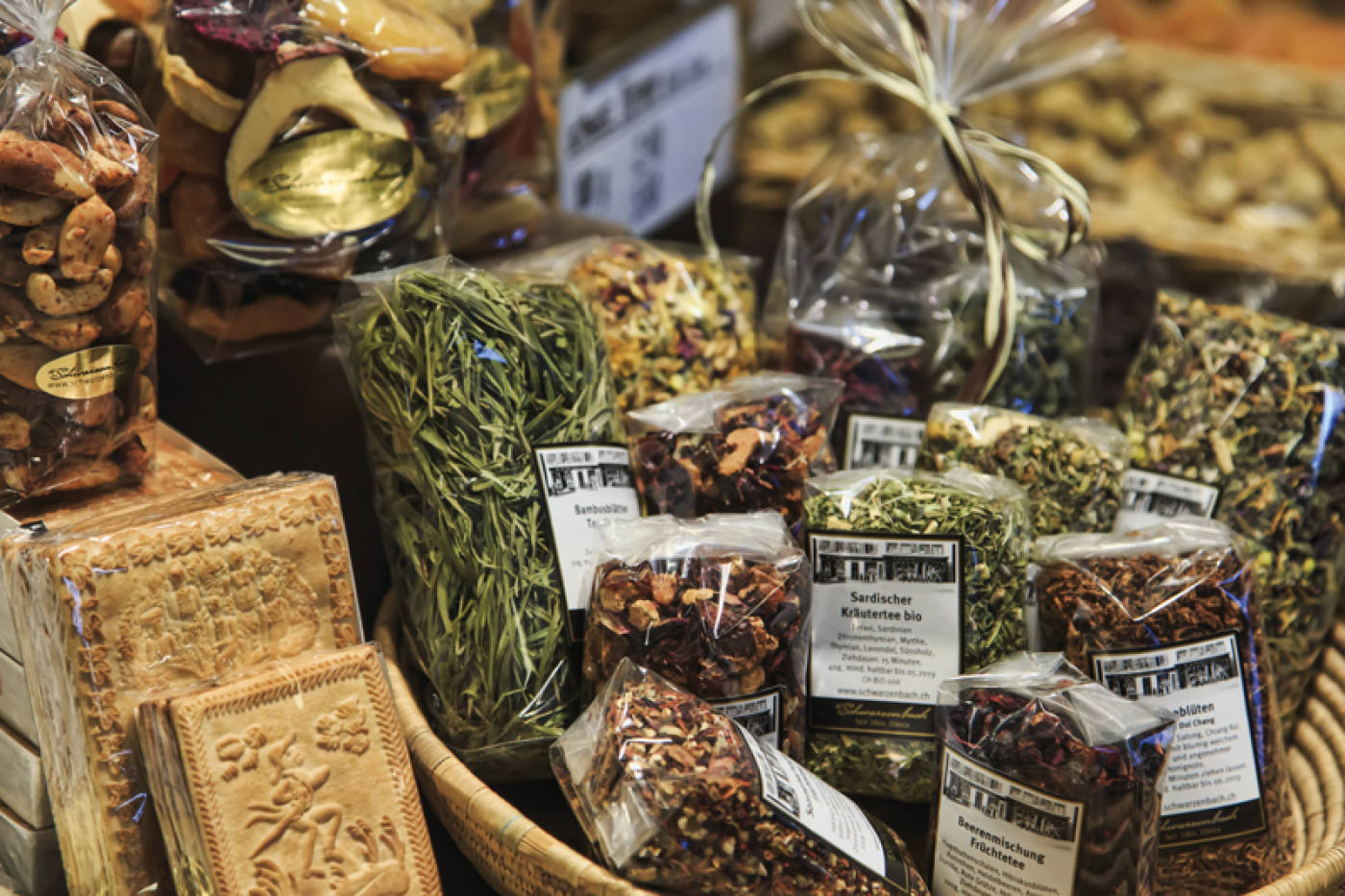 It’s a colourful mix of delis, studio galleries, and fashion boutiques. At the heart of it all is the Market Hall where local city growers and food artisans’ tables groan under the weight of organic farm produce, slow-grown meats, artisan cheeses, preserves, fresh fish, bread, flowers, spices, and spirits. This is culinary art, dripping with cool – the very cradle of local and seasonal food. One of the most interesting is St Jakob, a bakery, patisserie, chocolatier and ice-cream parlour who, for the past 120 years, employ only disabled people. Restaurant Viadukt’s supplies come from the local food stalls. They operate with a civic mission, combining a youth job training programme with live bands and a modern menu. www​.zuerich​.com/​i​m​-​v​i​adukt 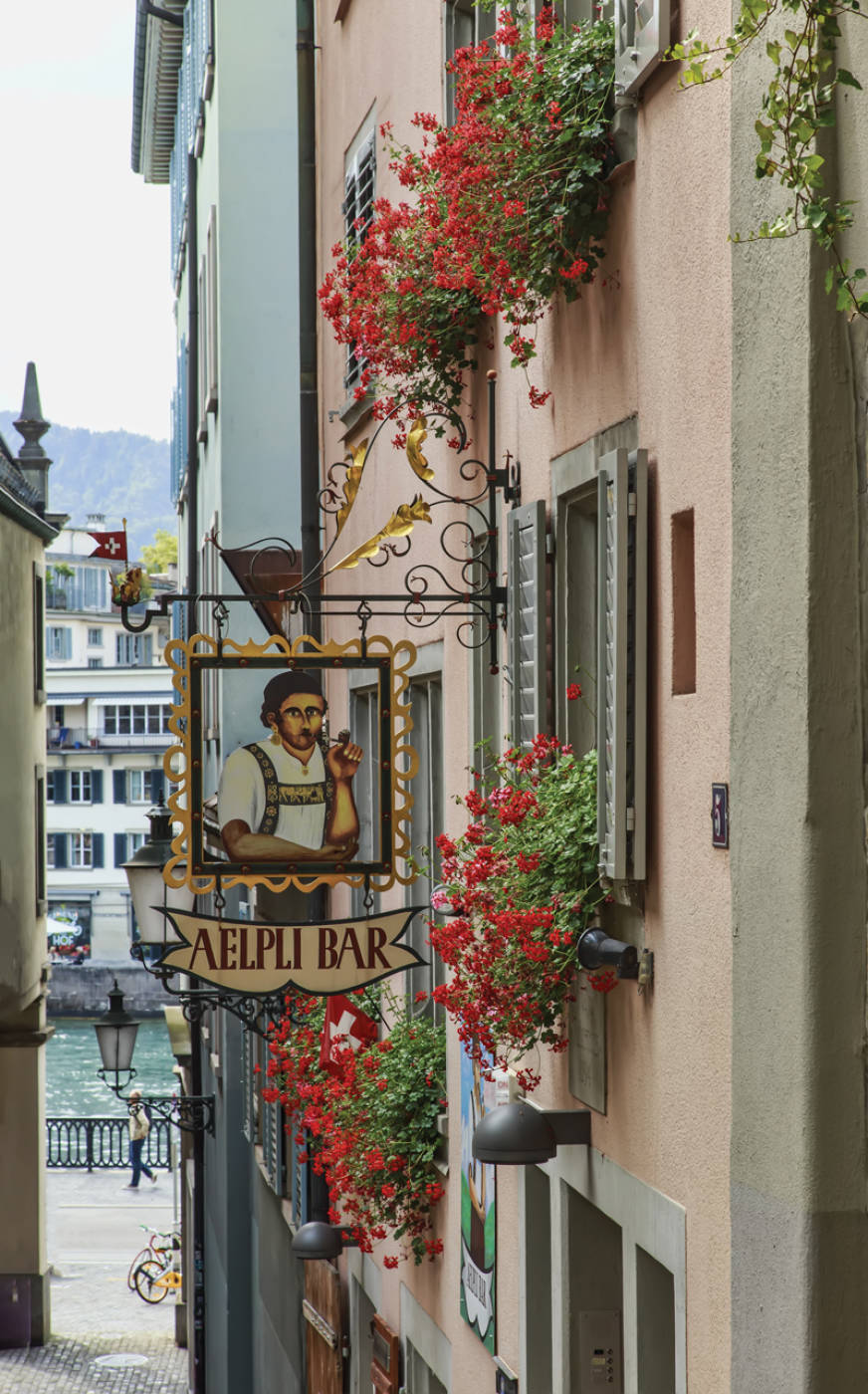 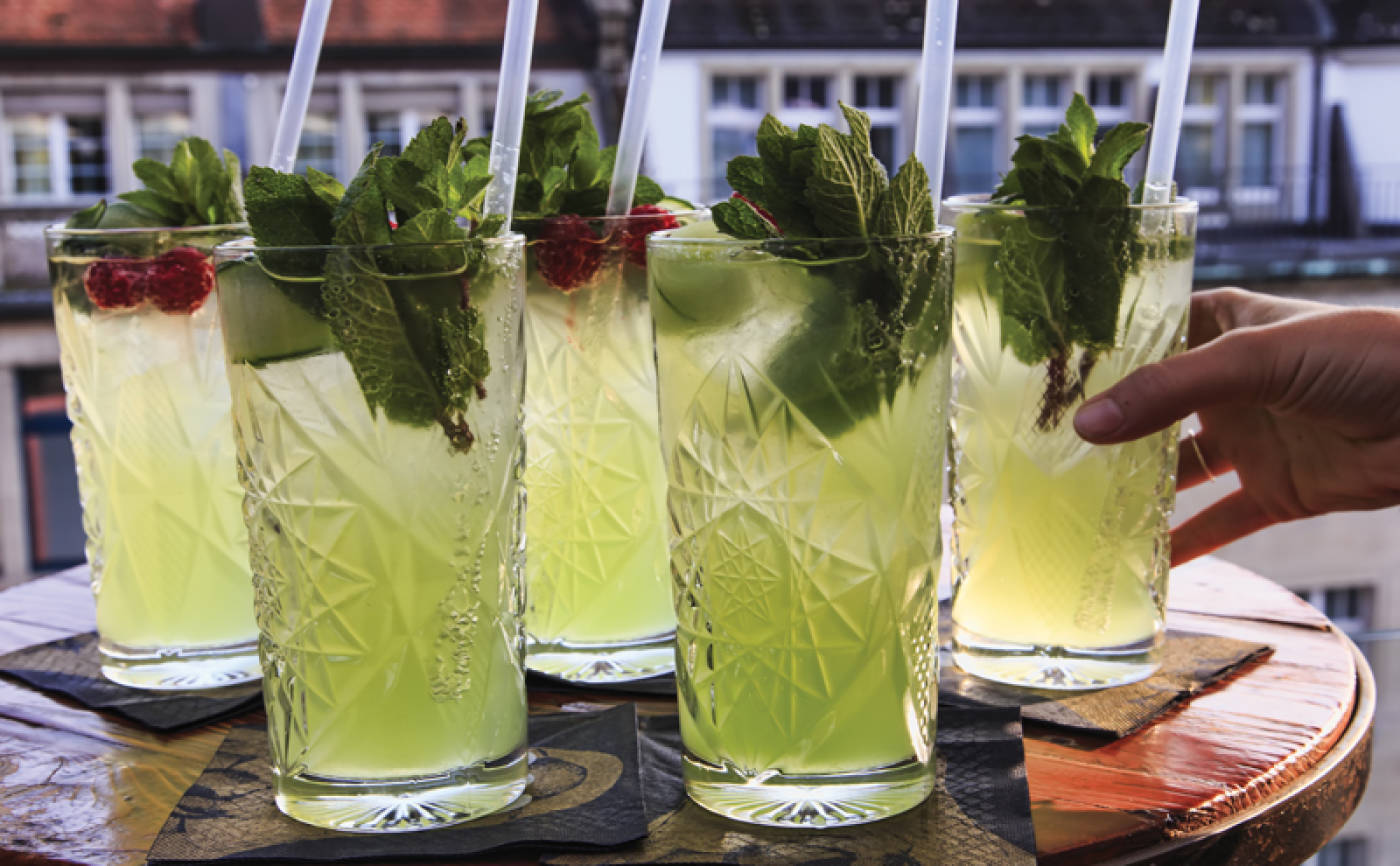 There are temples to fine cuisine on every other corner of Zurich-West food trail. Neni at 25 Hours Hotel is an Israeli concept restaurant serving sharing platters, rather than individual plates of food. At a former soap factory is Steinfels restaurant who have an onsite micro-brewery. Spheres is a place for book worms looking for inspiring reads, book launches and small concerts with literary themes. Other than food for thought there’s nourishment for the body too (and cake for the soul).

The character of each restaurant is injected with huge personality – Les Halles, for instance, known across Zurich as the place for moules and frites, is like walking into the imaginary world of Alice in Wonderland. This semi-industrial eatery is an eclectic palace of pinball machines, bicycles, a mishmash of antique tables and chairs, industrial items reimagined into furniture, sagging leather sofas, a concrete floor, old clocks, even older candle sticks and battered lanterns. Tour de France posters hang alongside modern art, Iggy Pop posters and ornately framed oil paintings. There’s a large wrap around bar, an on-site deli and butcher and glass fronted dressers filled with superb Swiss wine. 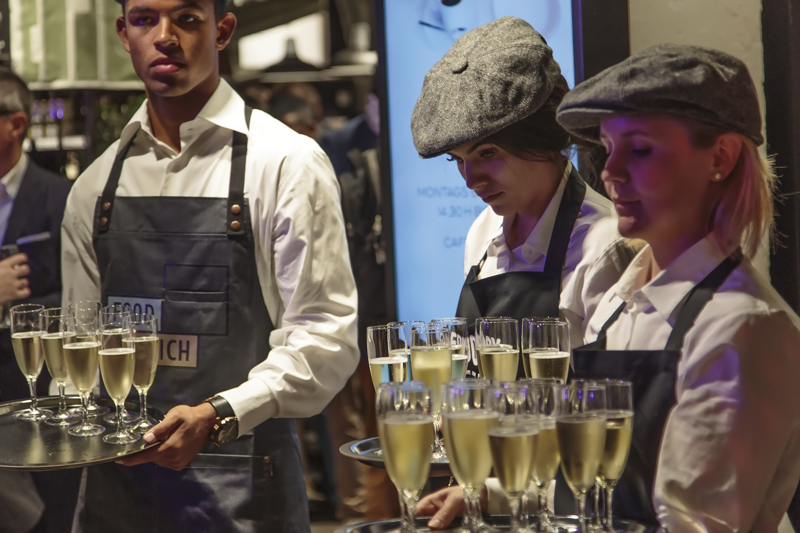 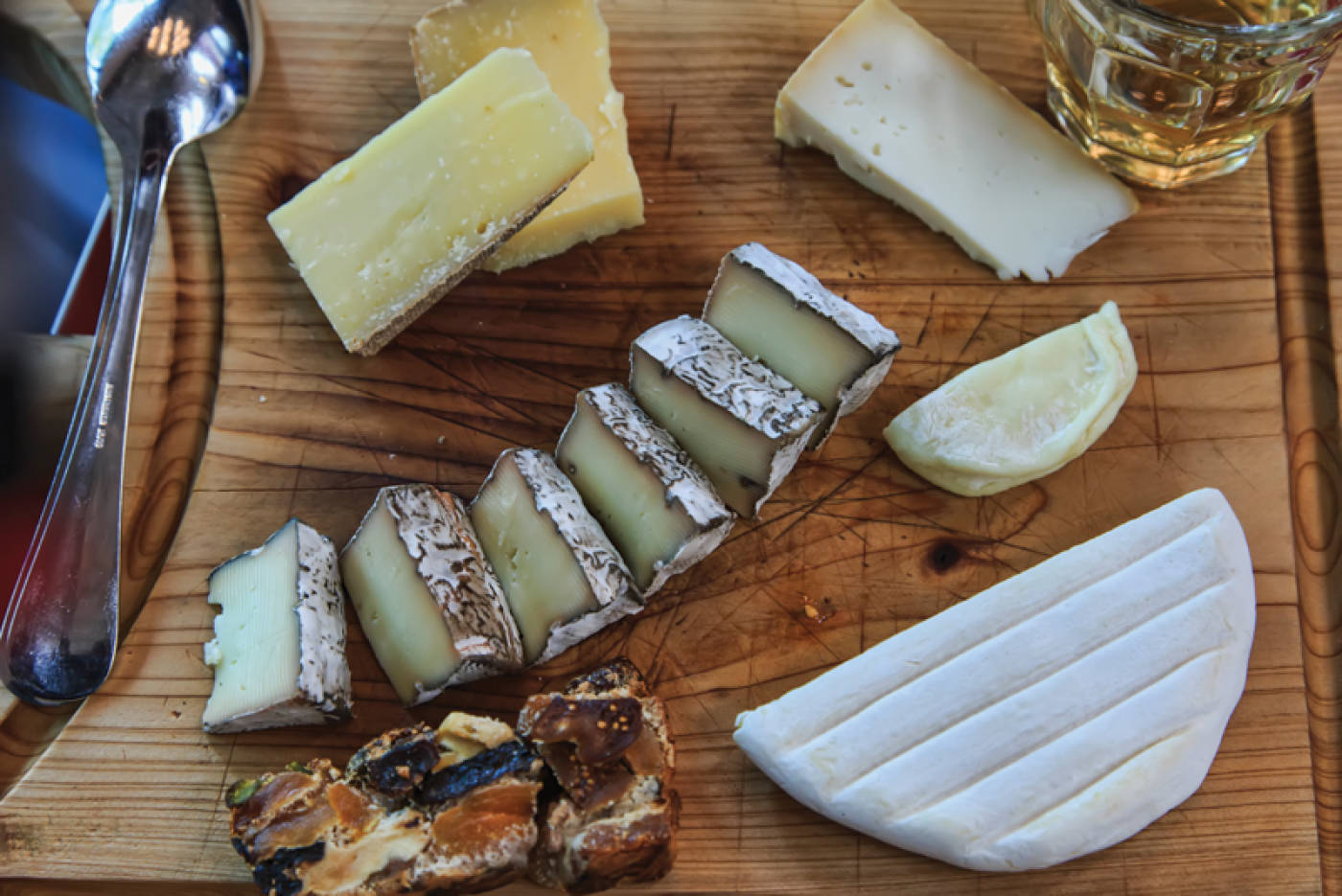 La Salle, housed in a former ship building yard, is another triumph of architectural upcycling with two glass cubes inserted into an immense industrial building – one cube is a high-end restaurant and the other a jazz club. At the hugely popular Maison Blunt, it’s all about authentic Moroccan cuisine, and Haus Hiltl, the world’s first vegetarian restaurant, you’ll be fine-tuned to healthy eating.

Zurich is a city of food – fresh produce markets are found in every neighbourhood, specialist shops like fish mongers, family run chocolatiers, and deli counters brimming over with oozing cheeses – everyone has a point of view on food. At the ​‘Vegetable Bridge’ in the old town there’s a Saturday morning farmers market. Petra Morgeli has been selling farm produce here for longer than she cares to remember. She also calls on office blocks providing fresh packs of fruit and vegetables to staff who prefer to lunch at their desks. Opposite Petra’s stand is the tuk-tuk of Oel & Essig, selling the very best olive oils from Italy. 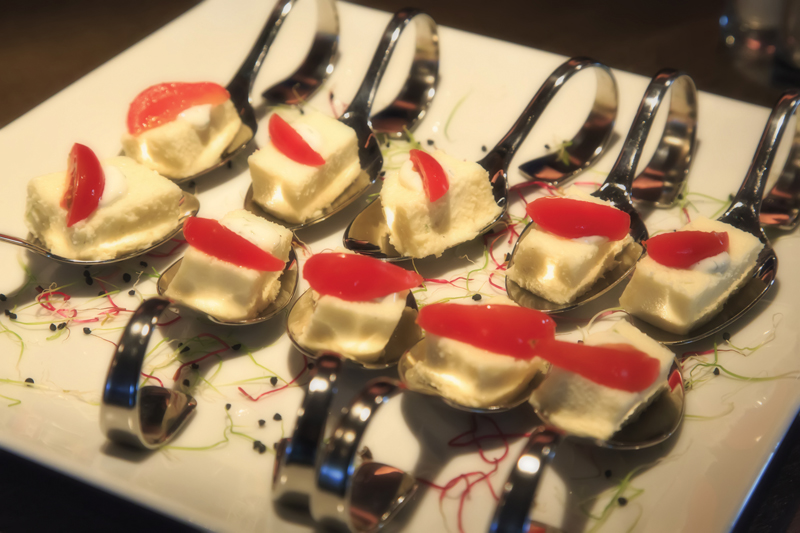 It starts to get interesting at the artisan bakery of John Baker, who buys his bio-organic flour from a local miller, Meyerhaud & Gie, who specifically blend their wheat to an exact recipe. ​“We produce on average 400 loaves a day,” says manager, Fabian Zentriegen. ​“And twice as much when we bake our favourite seasonal breads made up of fruit, olive oil, potato, or artichoke. It’s our philosophy to create the best bread with the best ingredients.”

Mika Lanz, an artisan sausage maker is typical of the new wave of progressive food producers. A filmmaker by trade, Mika went on to study food sciences and found his vocation in sausages. His artisan production facility operates in the basement of a Catholic Church, to the background sounds of hip-hop music. ​“It’s all small-scale” says Mika, ​“prepared from exquisite meat reared and slaughtered within the same confines on Zurich city farm.” He works directly with organic food groups who supply him with his best organic and free-range produce. Like high-end salami, Mika’s sausages are deeply savoury, the flavours rounded out with red wine. Some are made with blueberries, others lemon zest, roasted black pepper, or herbs. His vacuum-packed fresh lamb sausages are on another level. ​“The meat is free-range from the fields surrounding Zurich,” Mika adds, ​“and seasoned with wild dried apricots, which are soaked in white wine to expand.” His nose-to-tail philosophy produces exceptional handmade, small-batch products, worthy of the many Zurich restaurant tables they grace. Mika also does trendy outdoor catering on a barbeque attached to an e‑bike and occasionally does pre-arranged classes teaching small groups the techniques of sausage making. “
www​.mikas​.ch 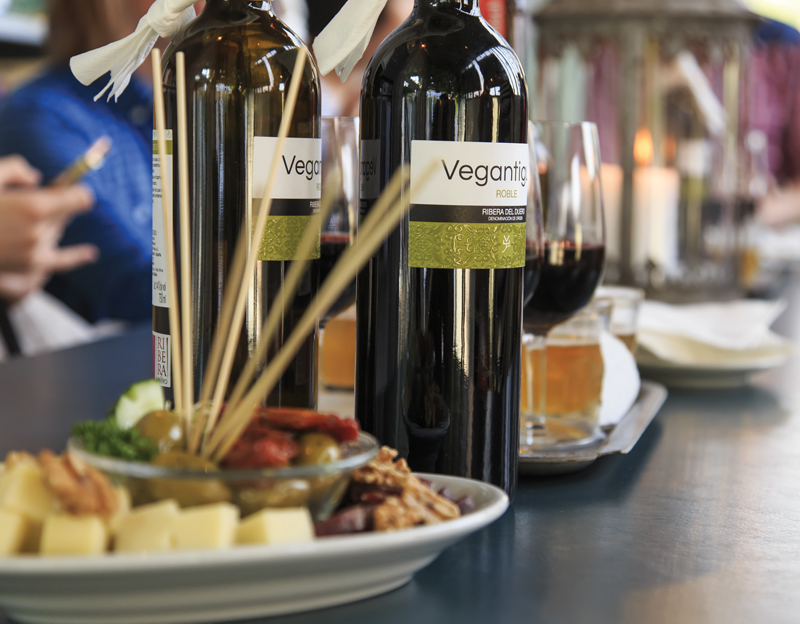 Street-food is on everyone’s lips, and there’s always some form of food celebration going on. Food-trucks and stands generate a street food nirvana, creating a sense of theatre to it all as every truck or stand has its very own production. Instead of doner kebabs, genuine delicacies are served: artisan burgers, dumplings, tacos, sushi, ceviche, oysters, raclette, hand-made chocolates, designer cupcakes.

Good taste is what brings Zurich together. Everything goes, so long as it stimulates the taste buds. From farm to fork, food-cart to fine dining, Zurich knows how to provide a taste of its produce, celebrating its culture in all its facets.

Aperitifs & fine dining: For creative Asian inspired cocktails and rooftops views across the city, head to Bahnhofstrasse’s heaven of urban cool – the Rooftop Restaurant, found on the sixth floor of the prestigious Modissa store. Then round your day off with an evening of eye-popping opulence, fine dining, and rubbing shoulders with the high society of the Alps, at the Dolder Grand Hotel’s Saltz Restaurant (a 15-minute funicular tram journey out of the city). Their Sashimi of Yellow fin tuna is like making out with the sea.
www​.the​do​ld​er​grand​.com

Spend the night: The Marktgasse Hotel, enveloped by Zurich’s picturesque old town, is surrounded by cobbled streets and centuries of antiquity. It’s been an Inn since 1426 and recently had a CHF70-million refurbish, transforming it into a timeless boutique hotel.

Delish, their trendy deli, is where hotel guests breakfast. Ask after their ​‘green eggs’ – sliced avo with poached eggs, and coriander; and don’t skip the cinnamon rolls! Their main restaurant, Balthos Kuche & Bar, have a concept menu of delights. Their Hummus Fries with garlic dip is a religious experience; and the goats cheese and pumpkin tarte is made by mermaids.

Luis Estrada, chef du bar, at the Balthos Bar, will shake you down with his ​‘Great Gatsby’, a cocktail consisting of rum, peated whisky, elderflower liqueur, mace syrup, peated bitters and a smoked salted rim. It got him through to the 2015 finals of the Diplomatico World Ambassador’s bartending competition in Venezuela. www​.mark​t​gasse​ho​tel​.ch

Pick up a ZurichCARD. CHF53 buys you 72-hours unlimited city transport, free/reduced admission to many museums, and half price on tours operated by Zurich Tourism, culinary treats at selected restaurants, and Lake Zurich river cruises. www​.zuerich​.com.