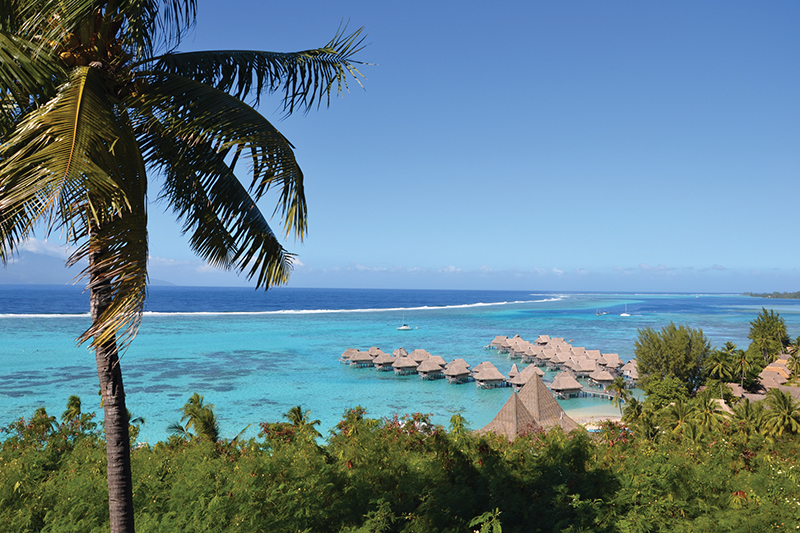 Travellers can surround themselves with the lush foliage on the island of Moorea, one of the 118 islands of Tahiti. A short boat ride from Tahiti, this tropical garden boasts Instagramable views of the turquoise ocean and the nearby lagoon. Here, visitors can also sample and buy homemade organic jams, dried fruits and freshly squeezed juices sold by the locals to keep them fuelled as they explore the coastal scenery.
www​.tahi​ti​tourisme​.uk 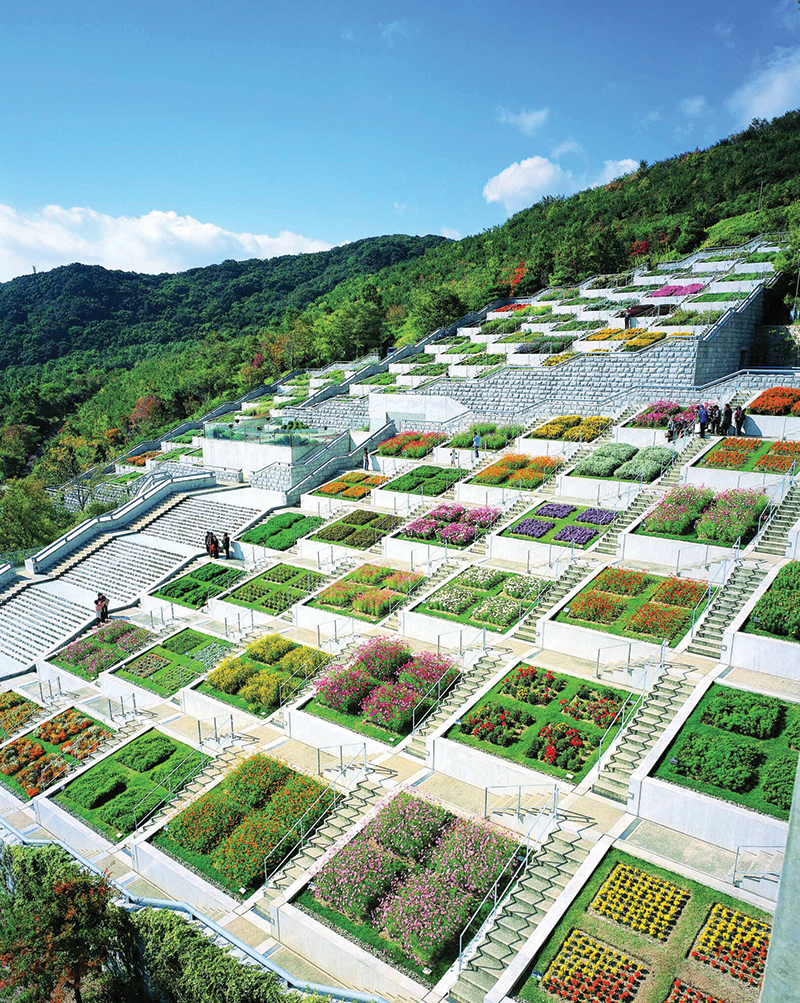 On the island of Awaji in Hyogo prefecture, Japan, visitors will come across Awaji Yumebutai, an impressive architectural labyrinth of green space perched on the side of a mountainous landscape. Previously destined to be a landfill site, after a devastating earthquake took the lives of over 6,000 people in 1995, architect Ando Tadao redesigned the space as a memorial, also known as the 100 Stepped Garden. The incredible landscape, which changes colours with the seasons, is filled with 100 flower beds laid out in small square gardens between footpaths and stairs.
setou​ch​itrip​.com 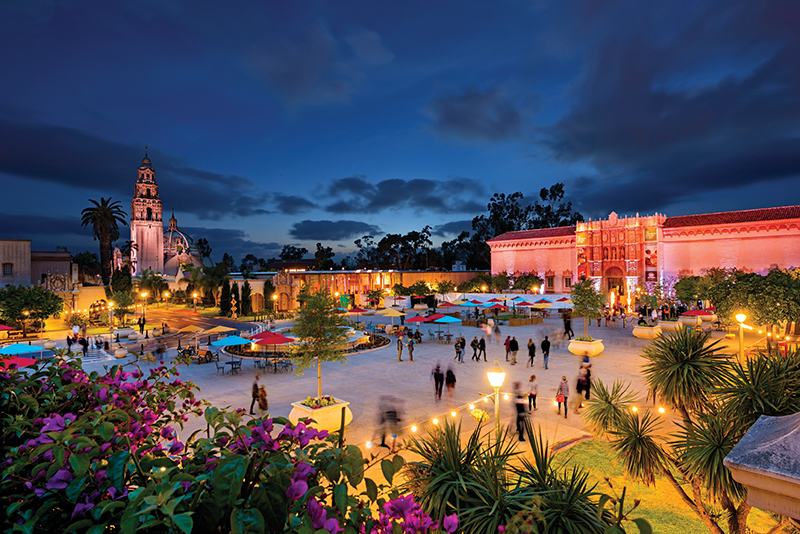 Celebrating its 150th anniversary this year, Balboa Park is home to unique landscaped gardens. Towering trees, roses, cacti and lotus blossoms shine throughout thanks to San Diego’s year-round warm climate. A 10-minute drive from the city, the park has 19 types of gardens and 1,200 acres of lush plants to enjoy. The San Diego Museum of Art can also be found in Balboa Park, where sculptures are scattered across the Plaza de Panama. Those wanting to experience the desert can take a stroll through the tropical oasis of Palm Canyon where there are more than 58 species of palm trees.
sandiego​.org 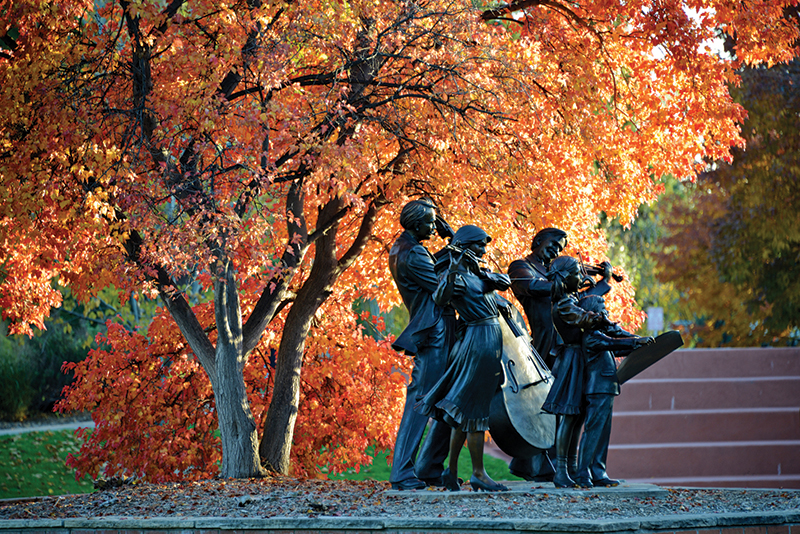 Loveland, Colorado is home to the Benson Sculpture Garden, a 10-acre park, featuring 158 pieces of permanent artwork. The park displays the work of world renowned artists such as, Jane De Decker, George Lundeen, Madeline Wiener and Gerald Balciar. The oasis is a great place to see unexpected features, such as Bean Pods and Magic Fish. There are plans to extend the park this year with the addition of a landscaped area, providing visitors with more space to explore.
col​orado​.com 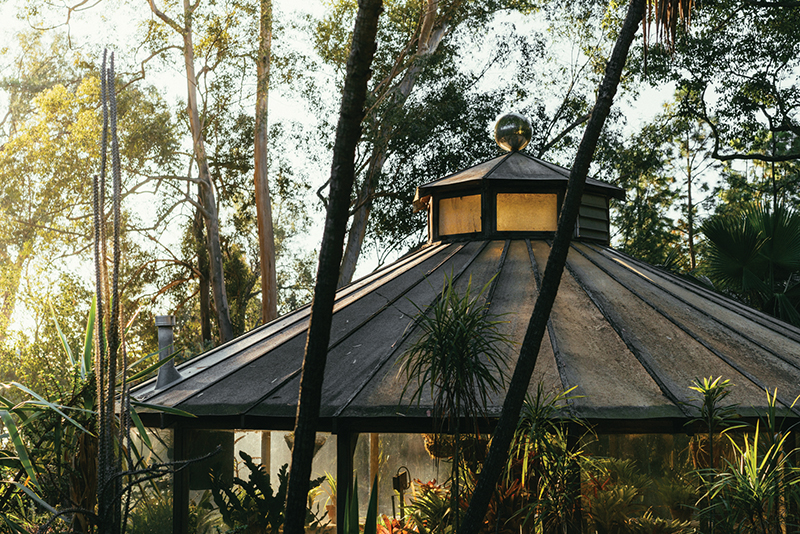 Ganna Walska Lotusland, located in the Montecito neighbourhood of Santa Barbara, is a botanical garden playing a crucial role in preserving endangered wild plants. Sprawling 37-acres and home to over 950 species. The efforts at Lotusland are helping to increase knowledge of the conservation of plants. The garden is named after Ganna Walska, a well-known opera singer and socialite who purchased the garden in 1941. Visitors can wander around the greenhouses and learn about some of the world’s longest living plants, which are rapidly losing ground in their native habitat.
santabar​bara​ca​.com 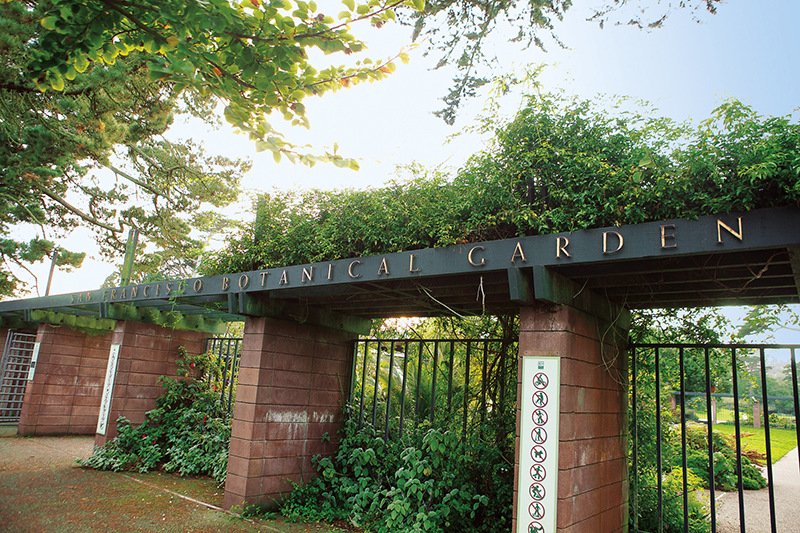 Located inside San Francisco’s spectacular Golden Gate Park, San Francisco Botanical Garden is formed of 55-acres of landscaped gardens and open spaces, with over 8,500 varieties of plants from around the world. The unique conditions of the Bay Area’s climate – wet winters, dry summers and coastal fog – allow for the garden to grow and conserve all types of plants. The Botanical Garden is known for its unique and diverse collections, including an extensive Magnolia collection, which is recognised as one of the most significant collections in North America.
sftrav​el​.com 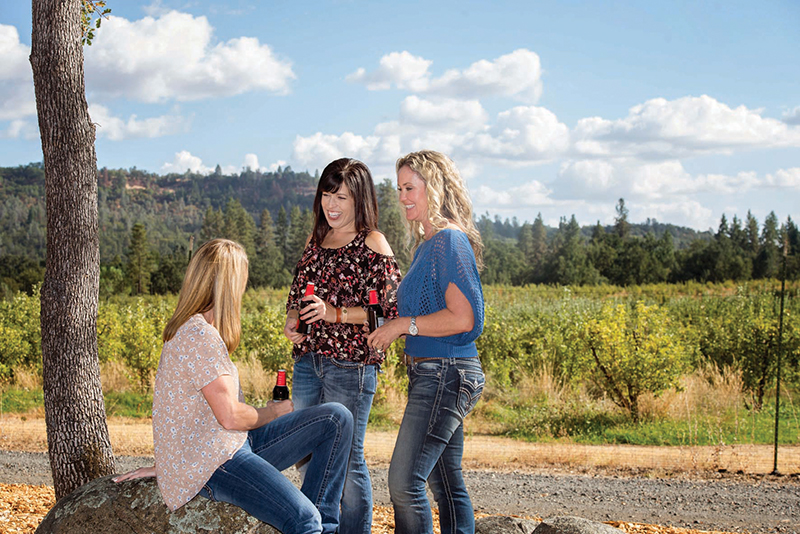 located just outside of Yosemite National park, the Indigeny Reserve is not just any old stretch of greenery, it’s also home to organic and sustainable apple orchards, as well as hiking trails. After taking a stroll through some of the 160 acres of secluded trails, travellers can quench their thirst by sampling tasty and gluten-free ciders produced by the Cider Works and Distillery on site.
visit​tuolumne​.com 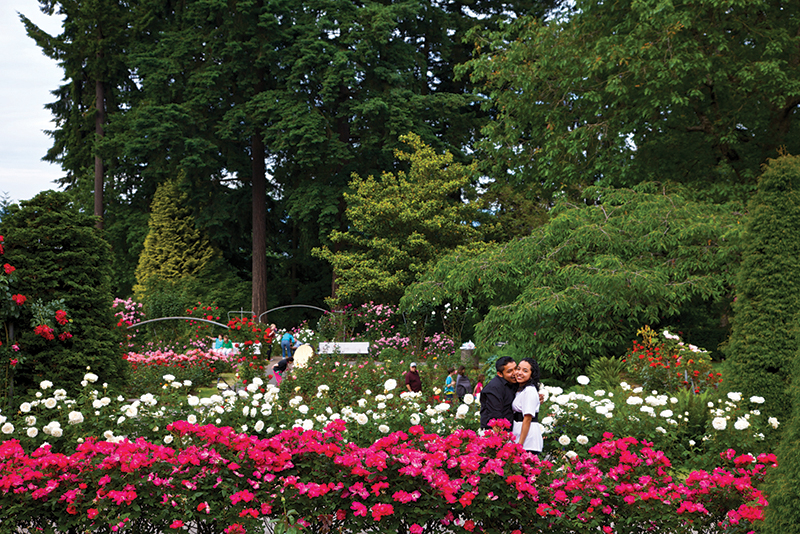 Home to a sprawling urban wilderness, Forest Park and even the world’s smallest park, Portland offers visitors more than 200 parks to explore within the city limits. Portland is also home to the International Rose Test Garden, the oldest of its kind in the US, featuring more than 10,000 rose bushes. The garden was established in 1917 as a testing ground for new rose families and became a sanctuary for European varieties during World War One. Located just minutes from downtown in Washington Park, the best time to visit the garden is in the months of June, July and August.
trav​el​port​land​.com 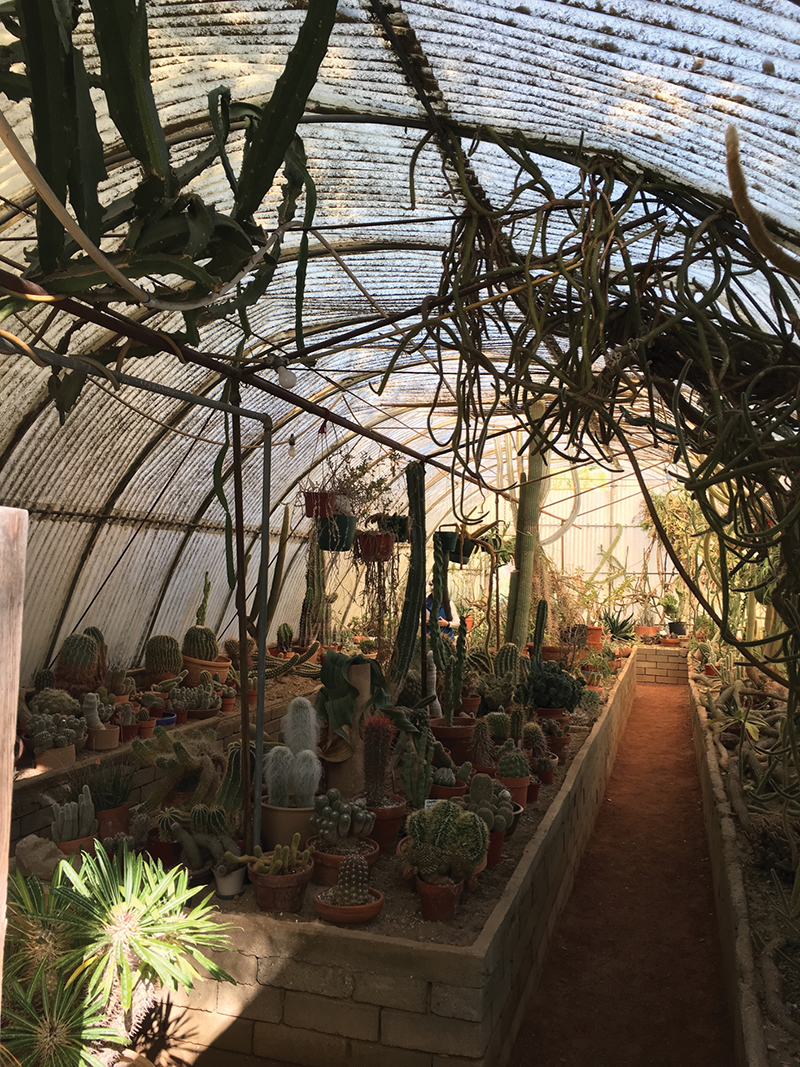 Visitors can find more than 3,000 varieties of desert plants in Moorten Botanical Garden and Cactarium, located in Greater Palm Springs. It was established in 1938, where the creators of this desert oasis – Patricia and Chester ​‘Cactus Slim’ Moorten – once designed and installed landscaped gardens for former local residents, Frank Sinatra and Walt Disney. The Cactarium greenhouse is one of the most photographed greenhouses in the world, where visitors can discover arborescent ​‘candelabra’ Euphorbia, aloes of Madagascar and Boojum trees – native to the Baja California Peninsula with only a small number found outside of this area in Mexico.
vis​it​greater​palm​springs​.com 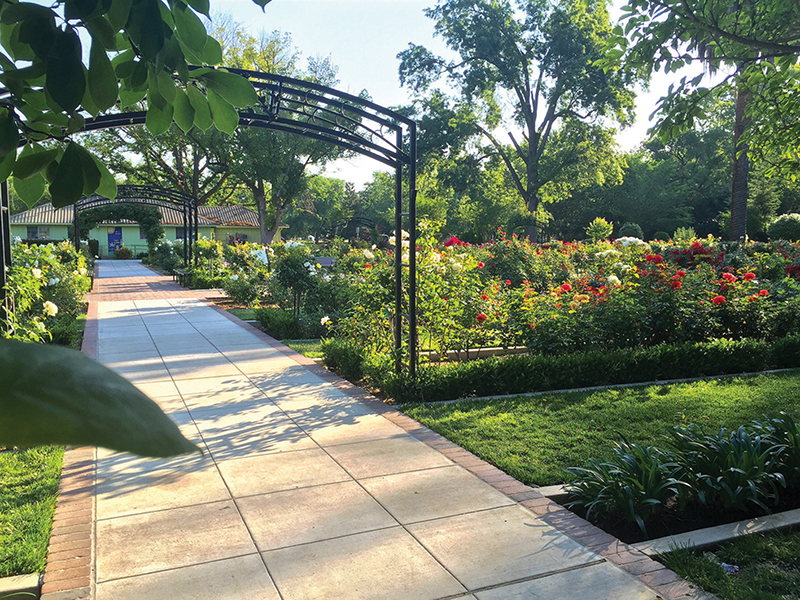 Located in McKinley Park, in the neighbourhood of East Sacramento, this 1.5‑acre rose garden is the largest in Sacramento. After many years of neglect, non-profit organisation, Friends of East Sacramento, created a beautiful display of over 1,200 rose bushes in 2012. Since then, the Golden Globe award winning film, Lady Bird – set and shot in the California capital –featured the rose garden.
vis​it​sacra​men​to​.com