Famed Danish speaker manufacturer Bang and Olufsen is no stranger when it comes to marrying high quality audio and innovation, and its latest product has a great case to be considered the perfect partnership.

Called the Beosound Shape, Bang & Olufsen engineers have created what can best be described as a wall of sound. The system is made up of several hexagonal tiles, with six tiles making up one set.

Behind each grille is a different component, whether it be speaker driver, acoustic dampener or amplifier and electronics. The basic six-tile setup comprises four speakers, one dampener and one ​‘master tile’ with the amplifier and brains of the system. One amplifier powers up to four speakers. The tiles effortlessly mount to your wall and each is connected with cables that are cleverly hidden in tracks around the outside of the tile, but still hidden by the tile’s grille. The tiles also have air vents built-in around the edges to make sure they don’t overheat, and because all the tiles have them, they create a chimney effect when connected together, so air that passes through the bottom tile can make its way to the top one. 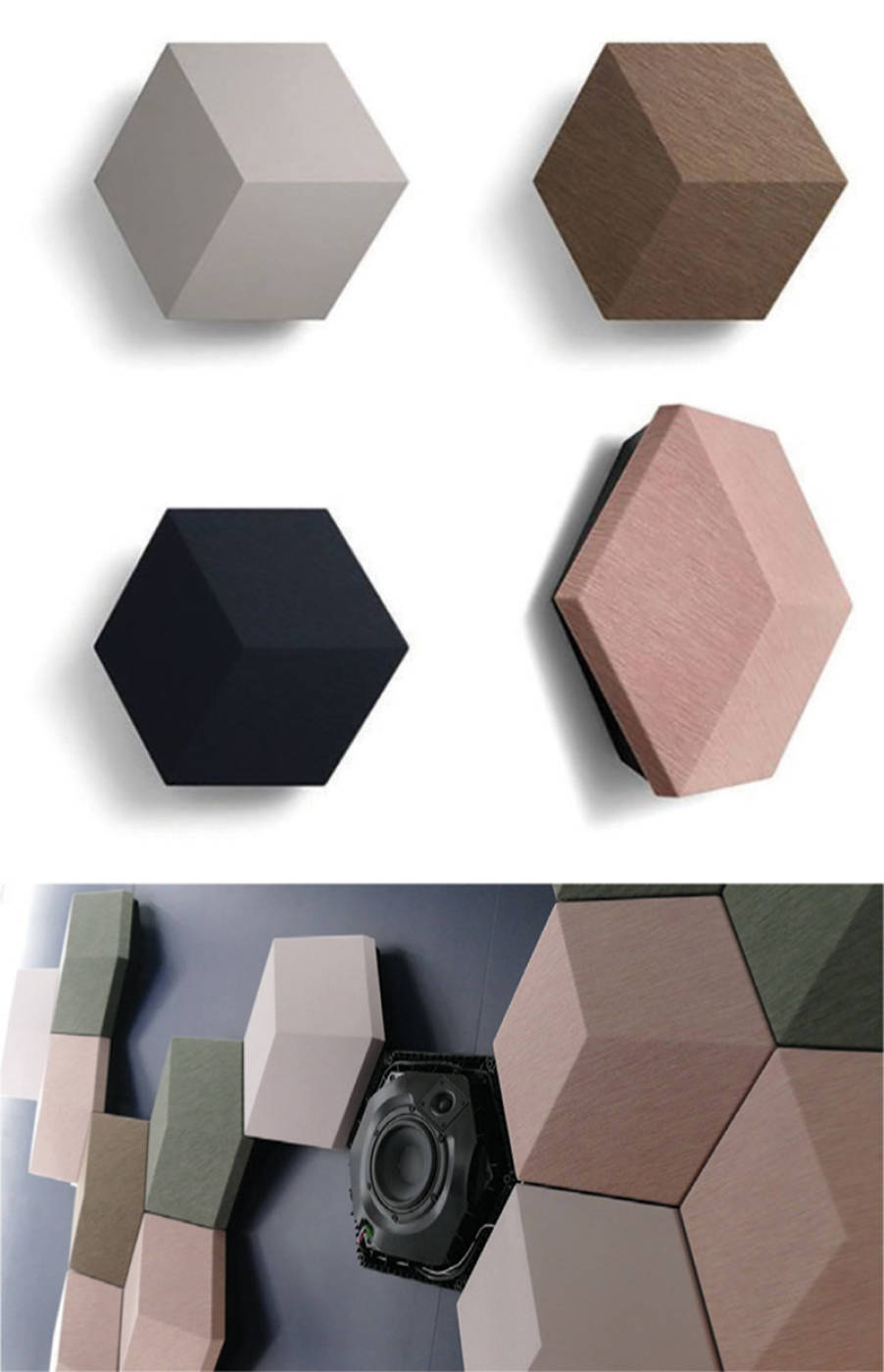 Beosound Shape’s real party trick is with the audio algorithms its sound engineers have come up with. With regular hi-fi speakers, you have a left channel and a right channel. If you move left or right of the middle ​‘sweet spot’, then your brain will be able to distinguish which speaker is closest, and you’ll only focus on that one.

The algorithms within the Beosound Shape eliminate that, so no matter where you are in the room, you’ll get the same sound going to your ears. It’s clever enough to separate the different frequencies and aspects of music too, so vocals for example will remain in the centre, while instruments will be placed around, as if you have a band playing in your room. B&O calls this effect, the ​“band on the wall”.

We were able to experience this in our hands-on session, and we have to say, it really does work. Switching between regular left and right stereo and then with the DSP activated, it was as clear as night and day how well it manipulated the sound. Bang & Olufsen says you can have up to 44 speakers and 11 amplifiers in one system, so you best make sure you have a big wall to mount them on, and a wallet deep enough to pay for it. B&O has also made it incredibly easy for you to design your own system. You don’t need to be an audio whizz to understand and work out what tiles need to go where, as an online shopping tool will take the measurements of your room and recommend the tiles you need and where to place them.

The Beosound Shape system actually connects to a separate box, called Beosound Core, that houses all the connections and handles online streaming services. From this box, which is also hidden behind a tile, you can connect via Wi-Fi, Bluetooth AirPlay and Google Cast.

It supports high-resolution audio up to 24-bit/96kHz and can work with other Bang & Olufsen and B&O Play products as part of a multi-
room system. The Beosound Shape system will also accept digital optical and analogue sources, too, such as TVs and turntables.

The Beosound Shape is very much a lifestyle audio product, B&O admits it’s not going after the audiophile with this one, but is for those who want to come home from a long day at work and put some music on in the background while they cook dinner or entertain guests, all in a stylish and effectively hidden package.

It’s an incredibly intriguing system and one we can’t wait to try out for ourselves. If you want to get the Beosound Shape in your own home, then prices start at £3,900.00.