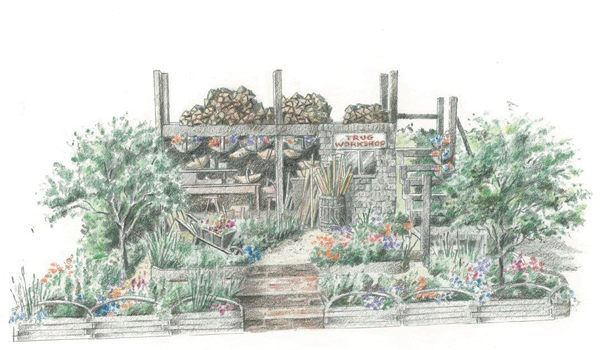 Sketch of A Trugmaker’s Garden

Following on from their Gold Medal success at Chelsea last year, Frogheath Landscapes will be creating another Artisan Garden at RHS Chelsea Flower Show 2015. The theme is A Trugmaker’s Garden, inspired by the 19th century Sussex trug maker Thomas Smith.

Frogheath’s involvement began last summer, shortly after the 2014 show had ended and early discussions with the designers Tina Vallis and Serena Fremantle were based around what would be achievable to bring their vision for the garden to reality.

The first job was to undertake a risk assessment – even though the scale of the garden is somewhat smaller than many created by Frogheath, the risk of a 200 kilo piece of oak falling onto someone’s head is just as relevant!

Every one of the 18 landscapers employed at Frogheath have been involved in the project. It has been a valuable training exercise with the experienced craftsmen using the opportunity to develop the skills of the team of apprentices.

For everyone to get a feel of what they were recreating, visits were made to the Trug Store and the Truggery. The team also went to Gray Nicolls cricket bat factory (trugs are made from the recycled willow), and ​‘coppicing’ in the woods to provide chestnut for the handles.

Steve Moody, director of Frogheath, explains ​“The involvement of the apprentices is invaluable. They learn new skills and, just as importantly, they learn how to do things safely and efficiently”.

Steve and the designers visited the Chelsea plot to mark it out and assess the ground levels, which they replicated at their nursery site, thus providing an invaluable opportunity for the junior team to learn about the importance of ground levels.

Over the winter, the work continued and the basic framework of the building was erected out of oak. Simon the carpenter explained to the apprentices how to make traditional joints for the workshop and the designers set Frogheath the challenge to research the finer details of how to replicate the chimney and traditional steamer of the workshop. Pathe news reels from 1927 were watched and duly provided answers and inspiration for the ones Frogheath have gone on to create. The water butt and the brickwork chimney were made using old imperial recycled bricks with traditional lime mortar.

The building is constantly being evolved and, once the designers are completely happy with it, will be taken down and rebuilt again – providing a timed schedule for the construction at the show.

In May, the whole construction will be taken down, carefully catalogued and loaded into crates. Minute detail will be vital at this point, for example, worn bricks for the steps cannot be confused with bricks for the chimney. Everything is then loaded onto one lorry and, in effect, you have a flat packed garden!

Upon arrival, three days are allocated for the hard landscaping build. Because of all the meticulous planning undertaken, the build will be quick and efficient, allowing the designers and planting team the maximum time to perfect the garden for the judges.

Creating award winning gardens for over 20 years
At Frogheath Landscapes, we pride ourselves on delivering successful projects from concept to completion. We work predominately within a 35 mile radius of our Burwash Weald base and use environmentally sensitive suppliers where possible. We employ a highly qualified team, under the direction of Steve Moody, who bring a wide range of skills, ensuring that our policy of practical design and build is consistently fulfilled. We have successfully proved over the years that budget is no barrier to excellence, having recently been nominated for an award for a garden based on a £1,500 budget, alongside awards for gardens with budgets in excessive of £100,000!