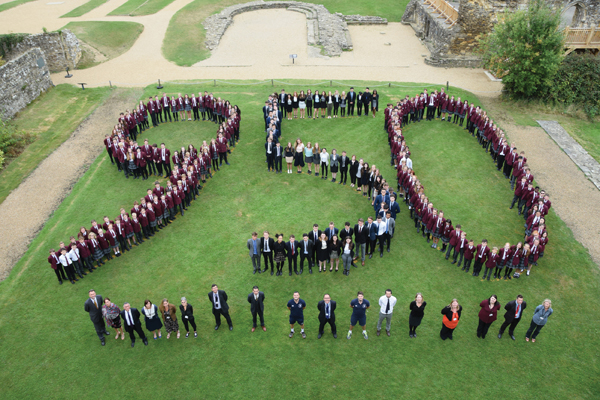 A big year for the students whose school is living history

How lucky are the students at Battle Abbey School this year? Not only do they routinely work in a school that stands on a site overlooking the most momentous battle in English history, but this October they can look forward to a bird’s eye view of the 950th Anniversary re-enactment.

Commemorating the battle that took place on 14th October 1066, which changed the course of English history forever, the weekend provides a packed calendar of events, suitable for everyone. For those wishing to put the historical significance of the event into perspective, there’ll be ample opportunity to learn more at the Visitor Centre, and to have a stroll around the Abbey grounds. Much of the Abbey is now in ruins, following the Reformation, but the Abbotts house remained intact and is now occupied by Battle Abbey School.

The weekend kicks off on Friday 14th October, the actual anniversary date, with events hosted by the Concorde 1066 committee, the Mayor of Battle and the School. This starts with a commemorative lunch for invited visitors from France and other parts of Europe, followed by parades, marching bands and a commemorative multi-denominational church service at the Parish Church.

Students from Battle Abbey and other local schools will join in the main parade, led by the Band of the Royal medieval re-enactors. Whilst the day will end with the School hosting the eminent and international guests, in the Abbots Hall, for wine, canapes and speeches.

On the Saturday and Sunday (15th/16th) English Heritage will host the battle re-enactment, involving over a thousand Norman and Saxon ​‘soldiers’ from medieval re-enactment groups. Alongside the action there will be medieval activities taking place for the public to both see and participate in. Within the armies’ encampments there’ll be displays of swordsmanship and falconry, you’ll be able to see the cavalry at close hand and have a go at archery, visit medieval traders, sample wares and, for the children, there will be a chance to take part in a kids’ battle.

For the School students, who already have the privilege of learning in a living historical setting, the weekend is a chance to immerse themselves in the history of the site and to watch as their knowledge of the events of 950 years ago are brought to life in vivid encounters. And what better place to do that than the school grounds which directly overlook the battle site, giving a panoramic view of events.

Founded in 1912, Battle Abbey School is an independent, co-educational school for day students and boarders aged between 2 – 18. Its setting is unique and its ethos is for hard work, in an environment based on kindness, compassion, friendship, mutual respect and trust. It achieves impressive academic results – recently being ranked at 153 in the Times Top 200 Independent Schools list – whilst it also prides itself on developing soft skills: self-confidence, concern for others, personal responsibility and leadership, to produce well-rounded alumni with an all-round education.

For more information about the events to celebrate the 950th anniversary of the Battle of Hastings, please visit
www​.con​corde1066​.co​.uk