A short history of Hastings Pier

Work on the 910 foot pier in Hastings, designed by Eugenius Birch, began in December 1869. It opened three years later on the first ever August Bank Holiday (it rained) at a cost of £23,250 including a very handsome 2000-seat pavilion at the seaward end. 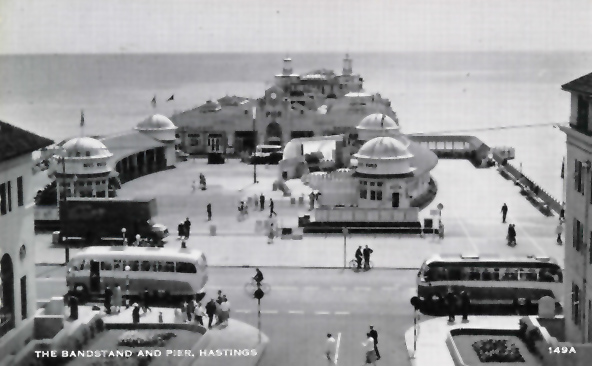 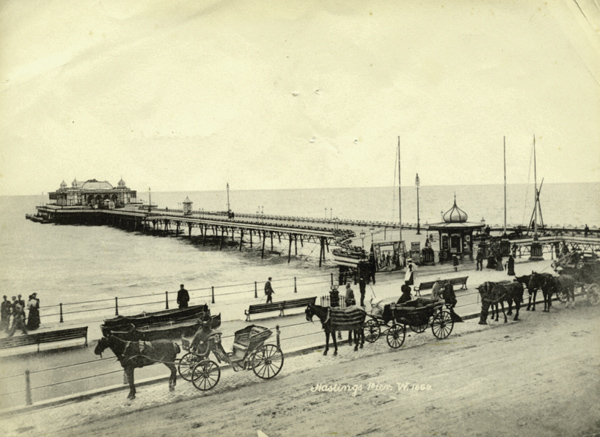 A landing stage was added shortly after and in 1910⁄11, a small building housing a shooting gallery, ​‘animated pictures’ and slot machines was built, followed in 1912 by a rifle range/bowling alley whilst the shoreward end of the pier, known as the ​‘parade extension’, was sold to the council in 1913 to finance a new arcade, shops and tea-room. 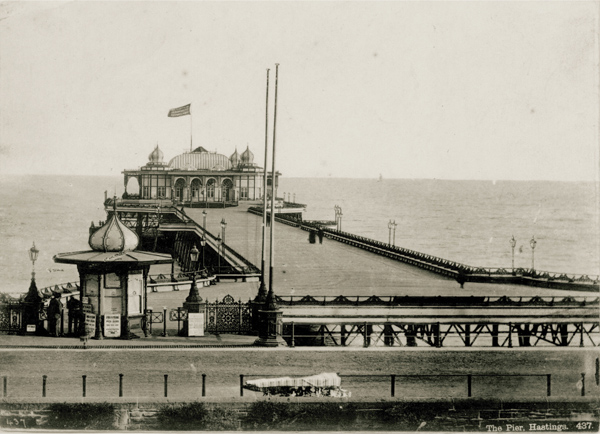 The original 1872 pavilion was destroyed by fire inJuly 1917 and not replaced until 1922, albeit in a less elaborate style. A shoreward end pavilion was built in 1926 with an Art Deco façade added in the 1930s and WWII saw the pier cut in half – literally – to prevent it being used as a landing stage for invading troops. The pieralso suffered some bomb damage, as did the rest of the town.

After the war and through to around the late 70s the pier became an icon of rock and pop music. The Sex Pistols, Hendrix, The Rolling Stones, Genesis and Pink Floyd all played the pier – the last time Syd Barrett played with the Floyd was on Hastings Pier. It was during that time that Hastings Council built the ​‘Triodome’ on the parade extension to house a special embroidery marking the 900th anniversary of the Battle of Hastings.

From its opening in 1872 Hastings Pier became the centre of tourism and entertainment for much of the South of England. Originally part of the Victorian seaside boom, it evolved with the times and enjoyed a central part of Hastings tourist trade. Sadly, that trade along with the British seaside holiday declined rapidly from the 70s, as did the fortunes of the pier.

By March 2008 decades of steady neglect and poor maintenance plus strong winds and very rough seas caused severe damage was caused to the seaward end of the pier and it was closed to the public for safety reasons. In the same year a local campaign group submitted a bid to the Heritage Lottery Fund for the rescue and redevelopment of the pier.

Then, in the early hours of October 5th 2010, a devastating fire swept through the pier destroying 95% of the super-structure. Throughout 2011Hastings Council employed experts to assess the full extent of the damage to the pier and attempted to get the owners, the Panamanian registered Ravenclaw, to carry out repair work to stabilise the structure. When this proved unsuccessful, the Council began steps to compulsorily purchase the pier and the local action group turned Hastings Pier Charity began raising the £15m now needed to rebuild the pier. 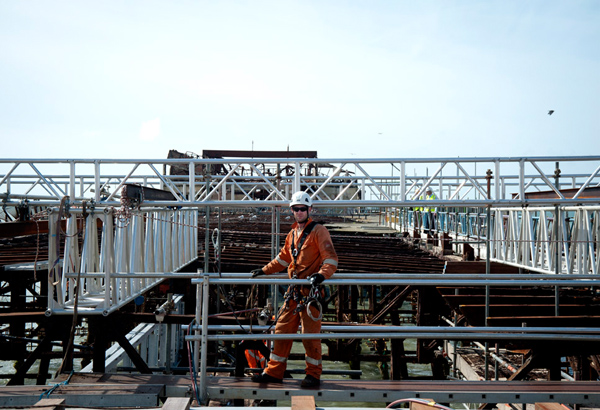 In November 2012 the Heritage Lottery Fund awarded Hastings Pier a grant of £11.4 million towards the total project cost of £14+ million for the rescue and restoration of the Pier and on Thursday 15th. August 2013 the Compulsory Purchase Order was enforced and ownership passed to the Hastings Pier Charity. Over the following months the charity succeeded in raising the remaining funds needed and work started on the reconstruction in January 2014. 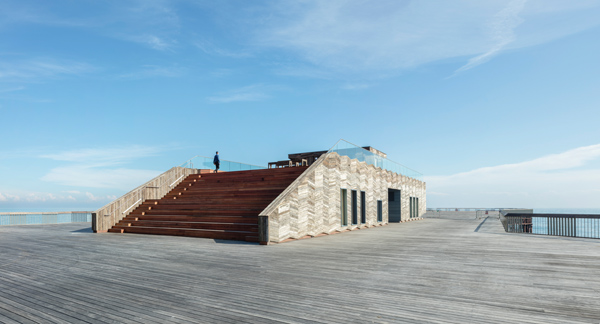 The pier opened for business in late April 2016 and in May a grand celebratory day of music was rounded off by a live, open-air concert by Madness – lead singer Suggs is a Hastings boy. Since then the new pier has seen well over 200,000 visitors and hosted many local events as well as a Summer Circus through August and the traditional seaside summer fairground rides. More live music concerts are planned together with farmers’ markets, a Xmas Fair, night sky watching and open-air cinema screenings.

The pier also has a full service restaurant – The Pavilion, housed in the one remaining building left by the 2010 fire and a rooftop bar terrace on the new building called The Deck. This offers terrific views back into Hastings and out along the coast as well as a heritage and archive centre accessed free via touchscreen table-top computers and two rooms that can be booked for private parties or meetings.

The works over the past few years involved laying over 50 miles of new decking, some 500,000+ screw fixings and replacing around 70% of the steelwork above the water line. But now the pier is ready for the next 140 years of its life and is once again a stand-out feature on the south coast; a real asset to Hastings, for locals and visitors alike.

With thanks to the National Piers Society (www​.piers​.org​.uk)