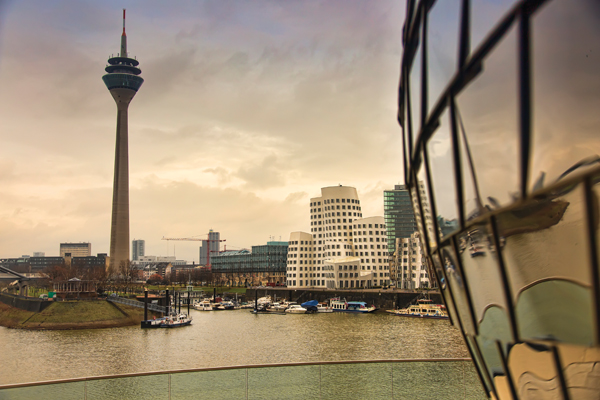 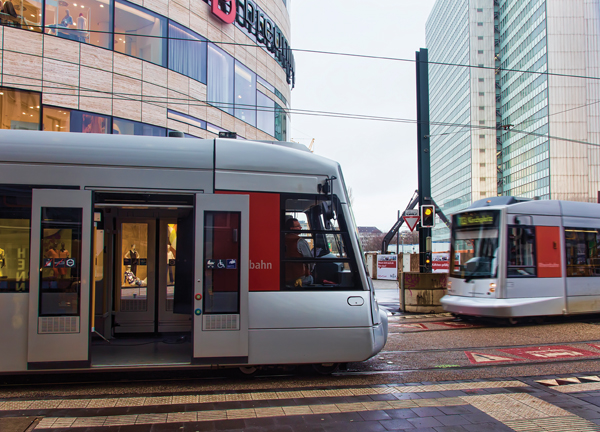 Apart from it being Germany’s richest city, the nation’s advertising and fashion capital (where Claudia Schiffer was discovered), and the hub of many corporations and banks, it’s also a city of eclectic art – ultimates and extremes, a sensational mix of glass, chrome and ancient bricks.

Apart from it being Germany’s richest city, the nation’s advertising and fashion capital (where Claudia Schiffer was discovered), and the hub of many corporations and banks, it’s also a city of eclectic art – ultimates and extremes, a sensational mix of glass, chrome and ancient bricks. 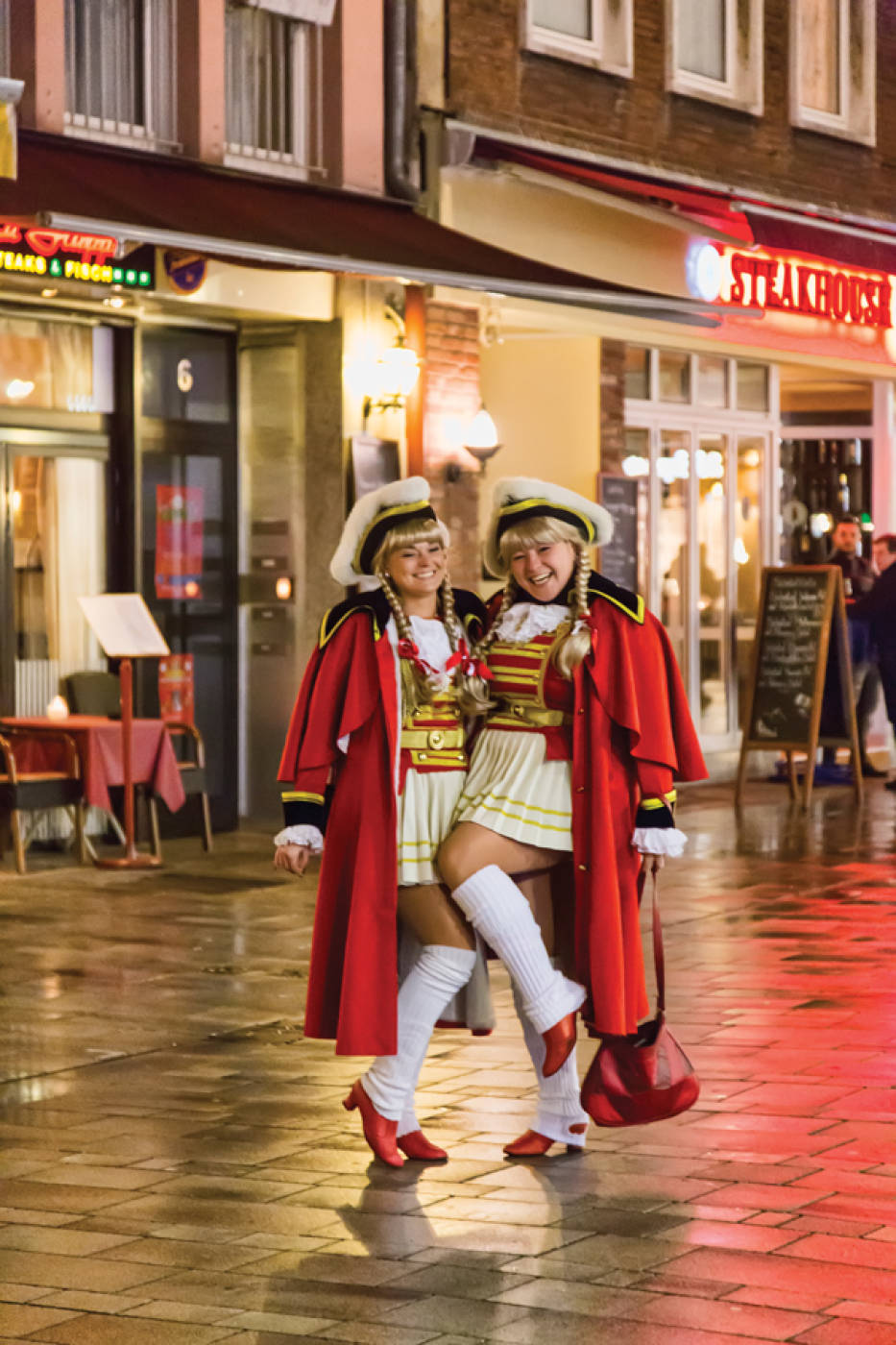 Their warped facades, not dissimilar to the surrealist art of Salvador Dali, capture the imagination: the two most eye-catching buildings being Roggendorf-Haus, with its outrageous plastic figures climbing up the exterior and a chrome office block which glistens when the sun reflects off its metal surfaces. Yet it all blends seamlessly with the surrounding Rococo and Baroque architecture.

Shop
In the city centre is the elegant Konigsallee Boulevard, a thoroughfare divided by a moat with a lush park down the centre. It is said to be where money is made as on one side of the Boulevard are banks and businesses and facing them on the opposite side are flagship haute couture boutiques.

For a trendy shopping experience visit the hipster walk of Lorettostrasse. Start at Bilker Church with Fromagerie for the best cheese in town, continue with creative stores like Sabas, Tuxedo and Uwe van Afferden, high-end deli’s like Bernstein & Inbar, wine groceries like the Bilker Weinhaus and finish at the local branded fashion label of Null:Zwo:Elf where you can buy ethnic souvenirs. Lose yourself in Wandel Antik, a huge warehouse for antique furniture and vintage designs. Should you get hungry try out the yummy pizza on the terrace of Menta or have homemade everything at FRL Buntenbach – even their egg warmers are croqueted! If you’re into the deep fried snacks of Dutch cuisine head to Leo’s Grill. 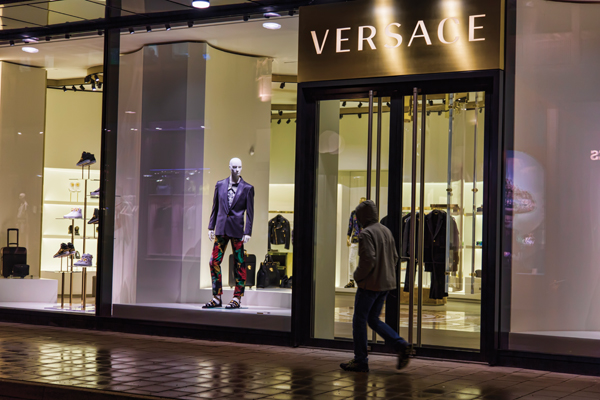 The alternative ​‘in’ shopping precinct is the Ackerstrasse region. A few years ago artists and designers moved into the area because of cheap rents, then came stylish investors. This has resulted in an eclectic interwoven mix of designer labels like Wunderwerk and Tina Miyake, high-end apartment blocks, second-hand boutiques like Elementarteilchen, MyOwnBike selling single geared bicycles and for imported coffee and homemade cake there’s Rekord.

Drink
A visit to Fuchschen Brewery (Altstadt) needs to top your must-do list. On Monday’s a few of the local old boys meet up in the ​‘Liar’s Corner’ to drink good beer and exchange yarns. A tradition they’ve upheld for +45 years. 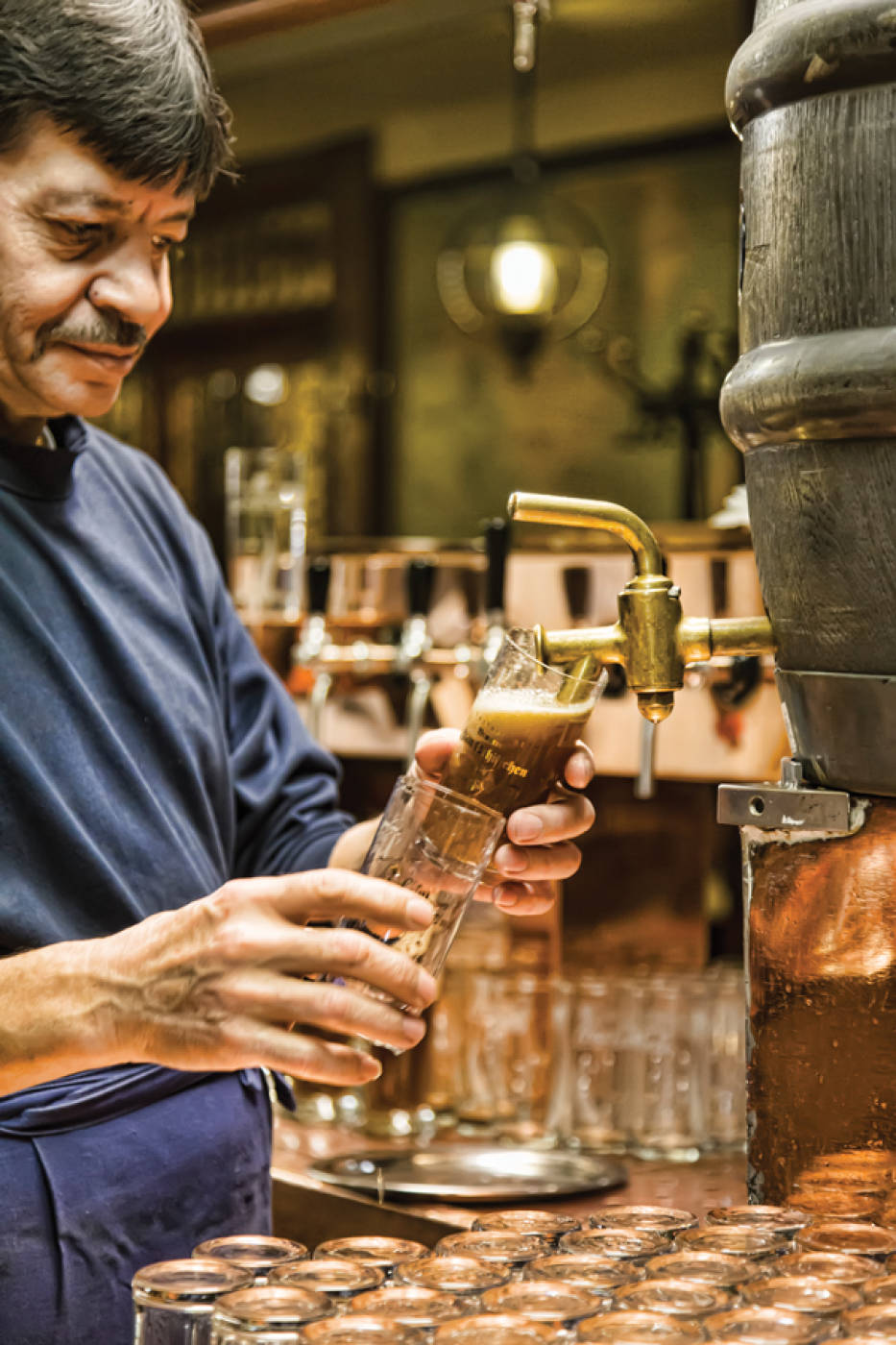 If Jägermeister is your thing then you’ll love Killepitsch – the holistic way to get hammered. It’s thick somewhat sweet, all natural liquor which contains 98 herbs, berries and fruit and distilled into a tow curling 42 percent alcohol. The best place to enjoy Killepitsch is at Et Kabuffke, an authentic small pub in Altstadt.

Wait for a warm day and take yourself down to the food wagon near Oberkasseler Bridge for Bratwurst or Currywurst, get a beer and pull up a bench. The view of the Rhine and the Altstadt is terrific and gets better with each sip.

Ratingerstrasse is the cradle of the Düsseldorf punk movement. Even now, this street is still seen as more alternative than Altstadt. Every Wednesday evening Ratingerstrasse mutates into a meeting point for all after-work party people. Check out the pub Zum Goldenen Einhorn.

When you drink Altbeer in one of the local breweries, the waiters replace your empty glass with a full one without asking. What may seem welcoming at first could become a problem when you get the bill. Put a beer coaster on top of your glass to let them know you’re done.

Although Germany is a true beer nation beer is not as cheap as one might think. Luckily an unlimited number of little kiosks called ​‘Budchen’ or ​‘Trinkhalle’ are scattered all over Dusseldorf and sell cold beer from €1.20.

Eat out
Neighbouring Altstadt, near the Hofgarten is Patisserie Passion which, if you’re a chocoholic, is heaven. Here the glass cabinets display gold pralines, chocolate torte and a selection of cakes and pastries to die for!

Zum Schiffchen (Altstadt) is another must-visit. It’s the city’s oldest restaurant where Napoleon himself is said to have dined. The history-steeped premises are smarter than other brewery pubs and the food is good too.

Bar Cherie, a cosy French-style café is one of the first choices of young Dusseldorfers for their first date. Try their fabulous tarte flambé.

If you get the late night munchies and you’re not into a kebab or pizza try out Dusseldorf’s answer to the burger – the famous Schweinebrotchen, a bread roll with two slices of juicy grilled pork. For late-night gourmet, Ham Ham Bei Josef is highly recommended.

Eat in
Since the 1700s Dusseldorf is famous for its mustard. Senfladen is a small Altstadt mustard shop that sells its wares in small stone pots with the company’s initials ​‘ABB’ inscribed in blue on the side. Van Gough so liked the mustard he included a depiction of it in one of his paintings.

Then there’s the bread, which Germans value more than beer. And it doesn’t get much better than Hinkel, a family run bakery for more than a century. Hinkel is a bustling carb-paradise stacked with artisan breads, pastries, cookies and cakes.

To find something to put on your Hinkel bread, take a wander around the undercover gourmet food stalls at Carlsplatz Market (established near six centuries ago).
*
Quirky stuff*
For murals and street art visit the alternative neighbourhood of Kiefernstrasse. House number 23 is the only remaining punk club in Dusseldorf, the notorious AK47.
Beneath the promenade, in one of the underground road tunnels, is KIT Kunst im Tunnel – an alternative art exhibition. Enter through the bar at ground level (great views of the Rhine) then take an elevator into the tunnel.

Should you decide to take the train to Cologne take a look to your left shortly after leaving the main train station. There’s a white house with lots of numbered windows; and behind every window sits a lady (in her underwear) waiting for customers. We all know what happens when the curtains are closed.

Where to stay
Directly beside the centrally located Savoy Theatre is the 27-roomed Hotel Stage 47. Don’t be fooled by the small entrance and check in area. Once ​‘backstage’ this boutique hotel, whose rooms are named after German actors, delivers the highest standard of black, chrome and glass, mood lighting and rain water showers. Rates start at €90.00 www​.stage47​.de. 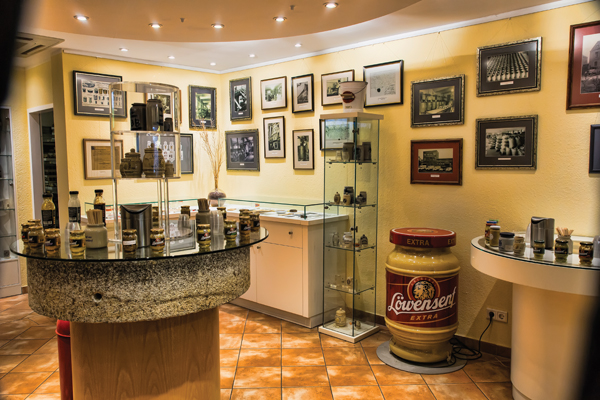 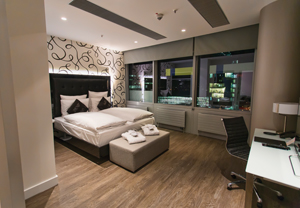 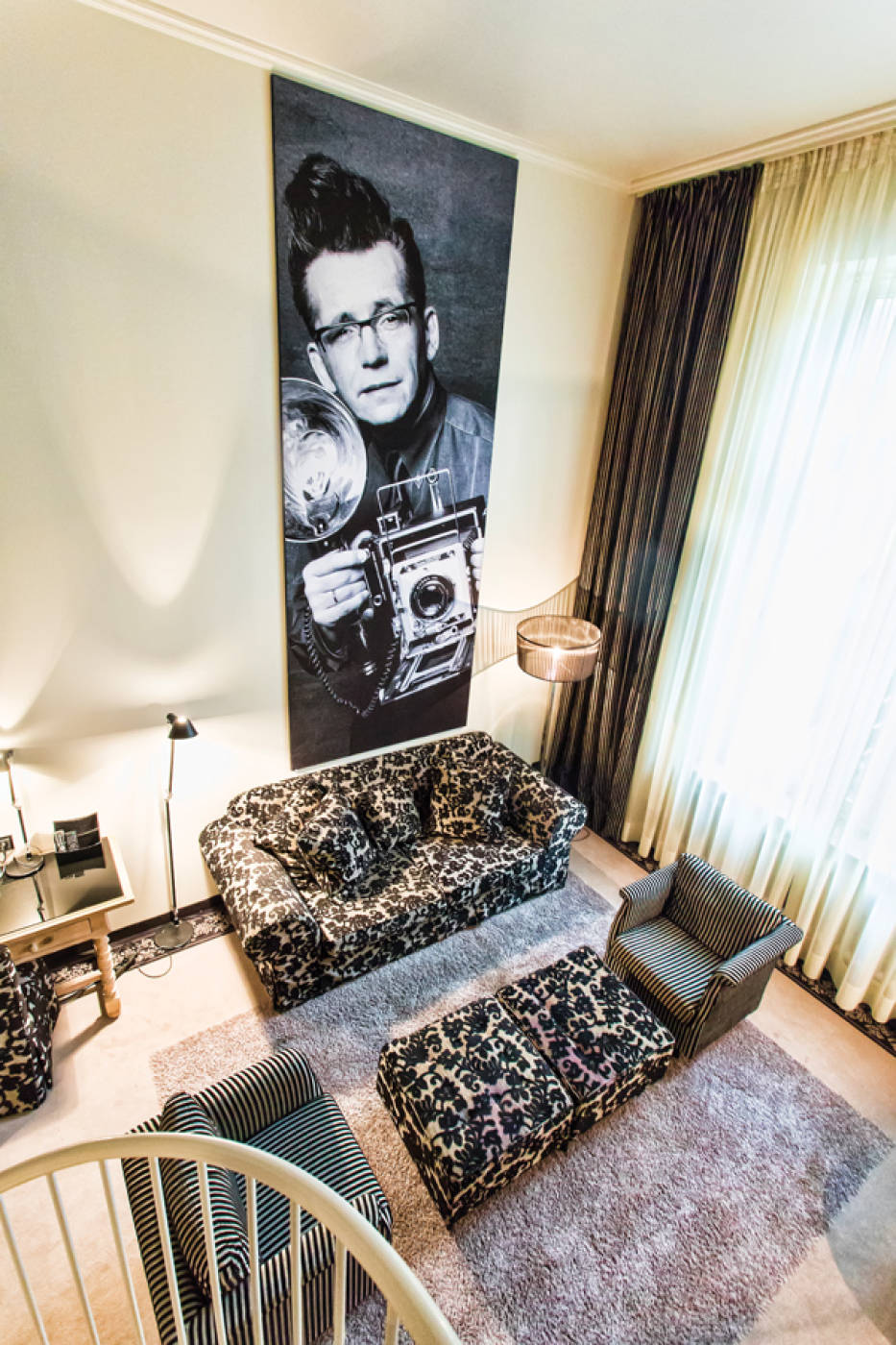 The MediaHarbour’s contemporary 134-room Innside Hotel is as stylish as the views are breath-taking with terrific cocktails being served in The Sky Lounge & Bar. Dine with a view across the city at one of Germany’s best gourmet restaurants – The View – that’s also recommended in the 2015 Michelin Guide. Room rates start at €79.80 www​.melia​.com.

Getting there
Germanwings, a low-cost airline based in Cologne and wholly owned by Lufthansa, fly to Germany and other European destinations from Heathrow www​.ger​man​wings​.com. A return flight costs less than £100.

Getting around
You’ll find yourself in the city in less than 20 minutes by train from Dusseldorf Airport for €2.50.
A Dusseldorf Card gets you free public transport, museum entrance and city tours – €9 for 24-hours.
See Dusseldorf Tourism to plan your trip www​.dus​sel​dorf​-touris​mus​.de.