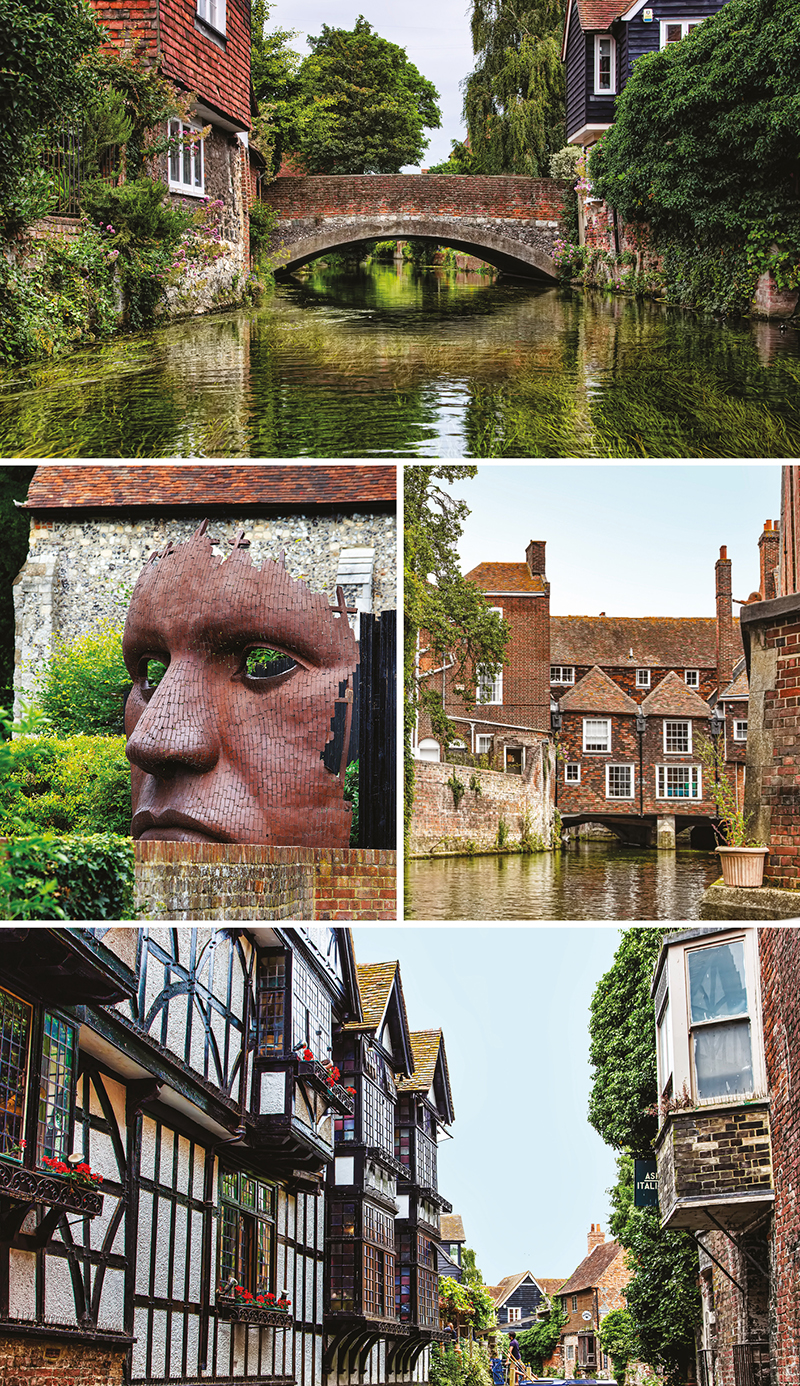 Pushing off from the small landing beside of the Old Weavers Restaurant in ancient Canterbury, our skipper, Peter Banks, steady’s the flat-bottomed boat with long wooden oars. The water is crystal clear; green river grass wave in the strong current.

“We’ve just left the Old Weavers House,” he says. ​“It’s one of the most photographed historic buildings in Canterbury. It dates to the 16th century when an influx of Flemish and Huguenot weavers settled in the area. Fleeing religious persecution, Queen Elizabeth I granted them the right to establish their weaving businesses in Canterbury.”

On route to Greyfriars, a small Franciscan island at one end of the city, we pass beneath the 12th century King’s Bridge. We duck our heads to avoid the Spanish Armada’s wooden beams that prop the bridge up.

Beyond Kings Bridge is the 900 year old Eastbridge Hospital which, historically, wasn’t a hospital at all, but more of an alms-house as it provided overnight accommodation for poor pilgrims who visited the shrine of St Thomas Becket. It’s now one of the few remaining alms-houses still providing accommodation for elderly citizens of Canterbury and is a Grade I listed building.

We silently glide past picturesque medieval buildings, including the Kings Mill, and Cromwell’s iron forge and stop at a metal chain which prevents us from proceeding further. This is Greyfriars, a tiny island that is home to a small 13th century chapel, which you can just about glimpse as it spans the river. Today it’s the only surviving Greyfriars Chapel in England.

As with many cities, Canterbury was founded and thrived because of its river. The land on which Canterbury is now built is where the Great Stour River forms a series of islands. It was the easiest crossing point for the Romans on route to London. It’s an integral part of Canterbury’s existence, initially providing drinking water and a food source then, in later years, affording the city power to run its milling and weaving industries.

The Great Stour River, which flows into Pegwell Bay in Sandwich, is the cleanest in England’s South-East, and is filled with pike, trout and eel, which are all protected. The natural beauty of the river, it’s wildlife and immediate surrounding are guarded by the Environmental Agency, Canterbury Council and Canterbury Historic River Tours. Together they preserve the river’s ecosystem. Peter explains that all the tour boats are powered by hand – there are no engines – and that he and other boatmen routinely clear rubbish from the river. 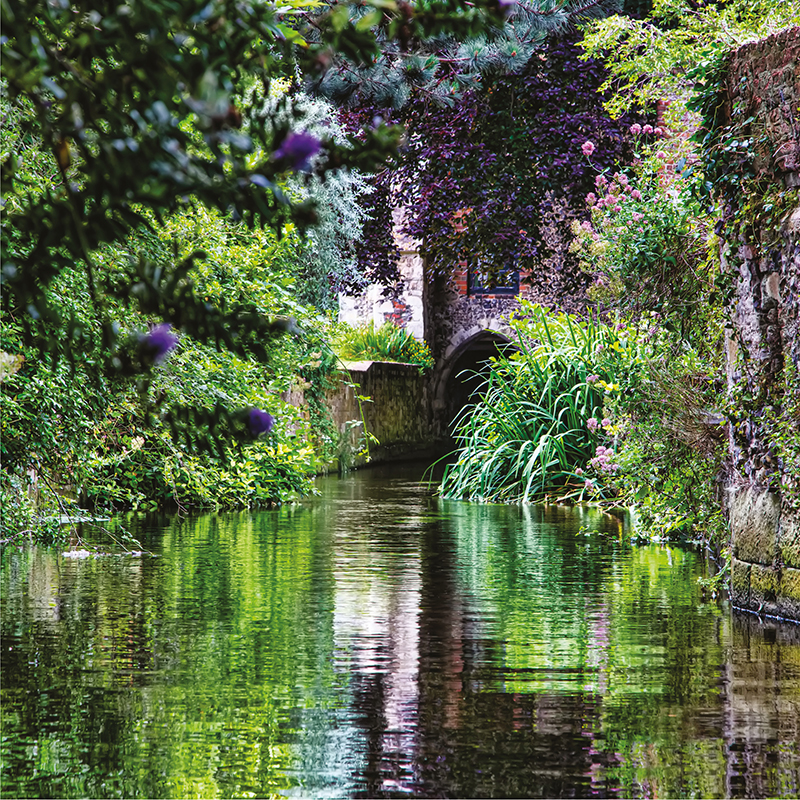 “As with many cities, Canterbury was founded and thrived because of its river.”

Between the magical ancient buildings, are haphazard pieces of art that only those passing on the river can see, like a small wire cat placed near the edge of the river and small busts and statues, like that of an Italian Catholic friar, St Francis of Assisi. Then there’s the ever-present wading birdlife – moorhens, mallard ducks, swans and the ever-present grey wagtails and pigeons.

Of particular relevance to our skipper, himself a history scholar at Canterbury University, is an ancient building which has a Pizza Express sign hanging over the water.

“It played a significant role during WW2, when Canterbury was at risk of ​‘cultural bombing’ which was a time when historical cities became bombing targets,” says Peter. ​“During the war my great grandfather was entrusted to remove the stained-glass windows from Canterbury Cathedral and store them in a place of safety. The building he chose is that one which now houses a Pizza Express.”

What a wonderful bit of history to hang your hat on.

We head back to Kings Bridge passing the Old Weavers House, Kings Mill and the Alchemist Tower which stands in the shadow of the cathedral. Peter continually introduces us to snippets of history like that of the Cromwellian iron forge, the 14th century Friars Bridge, Blackfriars buildings and the Dominican Priory – one of the most important medieval buildings in the city.

After some wonderful views of Canterbury Cathedral, Peter continues to punt past the King’s School Art College (who turned down a Harry Potter movie location offer), ending in a peaceful garden area, which was the site of the once lofty Abbots Mill – a water powered corn mill, the only building to then rival the cathedral’s height.

The Abbott’s Mill, a timber building, was destroyed in a spectacular blaze, which lasted for three days, almost taking the Miller’s Arms along with it. Thankfully, the pub still stands. Since then, the site where the Abbott’s Mill once stood, has been left empty and now forms part of Solly’s Orchard riverside walk. 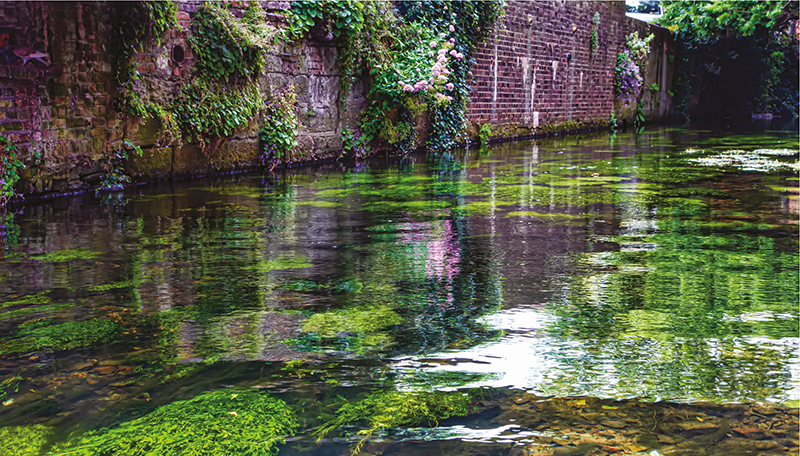 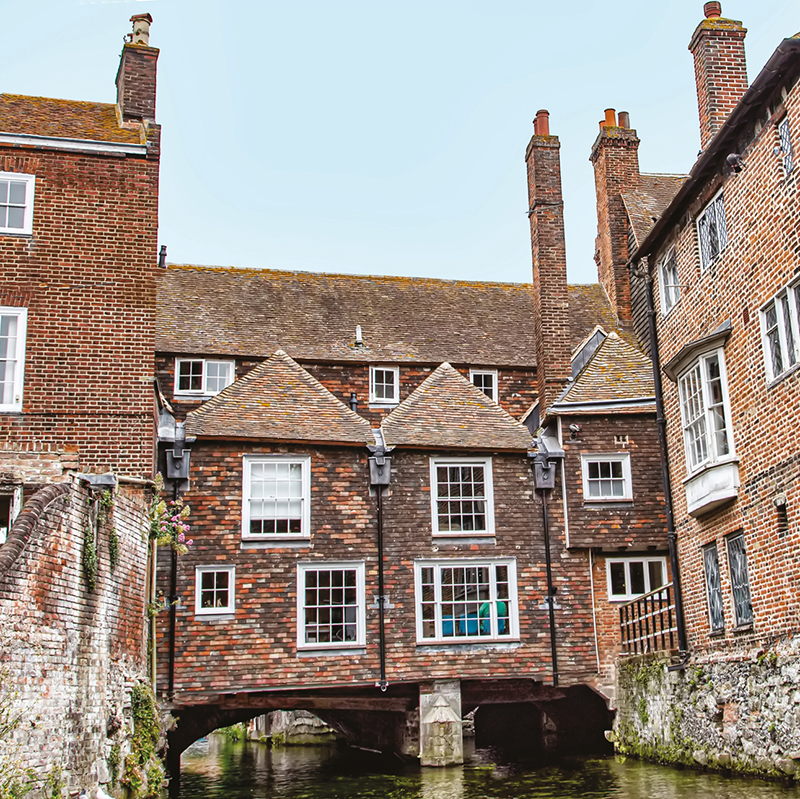 We return to where we started, passing the 1829 cast-iron flood gates where the flow of water is managed, the Marlowe Theatre, one of Britain’s finest regional stages, with eye-catching giant sculptures, and under the Friar Bridge.

“Let me show you what ​‘legging it’ means,” Peter announces. He lays his oars down on the boat, lies on his back, hoicks his legs into the air and walks on the underside of the bridge, thus propelling the boat to the other side. ​“That, ladies and gentlemen, is where the phrase ​‘legging it’ originated.”

Once the laughter died down, we’re told about the Ducking Stool, which is suspended above the river, opposite the dock. Apparently, it was used to punish and publicly shame nagging wives. It is said that it was also used to root out suspected witches, who would be dunked under water and held there for several minutes. If the woman didn’t drown, she was proved a witch. If she did drown at least her name was cleared.

Being relatively local, I’ve visited Canterbury countless times. I’m a bit sniffy about doing touristy things like this, which is my bad as in this 45-minute outing I gained a unique insight into the city’s history – and got to see its hidden corners, unreachable on foot. Coupled with lively commentary describing the city’s ancient secrets, whilst punting through chocolate-box landscapes, delivers a joyful education.