Half expecting Kolkata to be a city of squalor and dilapidated buildings, shrouded in a tropical cloak of decay, I’m astounded to find instead an explosion of vibrant colours and heady spices; bolts of silk in silver and azure and intricate hand-crafted gold jewellery. It’s a fusion of untouched history and heat; a sensory blast of classical Indian music and the excited chat of 15-million people. For the most, Kolkata’s shabby streets and distressed buildings (spread over 676 sq miles) remain untouched since its independence in 1947, but it does so in a vintage manner. 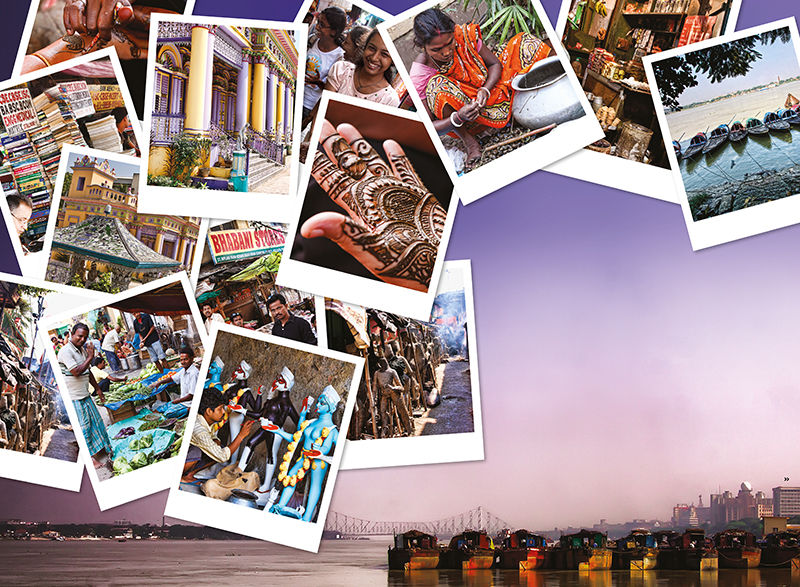 Kolkata was in economic stagnation until 2000, when the region had an IT industry boost. Now there’s a bizarre merge of old colonial structures, connected to one another via a cobweb of external cables, chaotic eclectic markets and sci-fi glass sky scrapers – all softened by tropical palms.

With no motorways and few sidewalks, pedestrians are forced to walk in the frenzied traffic which, in certain areas, is also shared by numerous farm animals. The ​‘every man for himself’ rule applies here as there are no demarcated lanes and sparse traffic control – other than the traffic calming measures of potholes. Maybe the non-maintenance of public roads is how the government addresses many of the issues associated with speed as, in all honestly, there’s little chance of exceeding 20mph in most places.

Thus, surrounded by incessant tooting and road hazards of every description I quickly concluded that a visit to Kolkata was not a self-drive option. Ask your hotel to recommend a transport company who can provide both an air-conditioned car and driver.

In three short days I glimpse but a fraction of what India’s capital of culture has to offer, like the visually challenging Mullik Ghat Flower Market; the artistic quarter where I observe the makings of the goddess Kali. I visit the ornate pink and lavender Jainism temple; the College Street book bazaar where students buy and sell university text books; the watch district in Radha Bazaar on Ezra Street; and the Armenian Church hidden away amid the bustle of Old China Bazaar Street – it’s claimed to be Kolkata’s oldest place of Christian worship. There are gorgeous silk saris of the famous Bengali Baluchoris variety at the Haati Bazaar; and I briefly insert myself into the mayhem of Bakshinayon arts and crafts market then opt instead to have my hands tattooed with henna at the Grariahat market.

For super greeting cards, candles and screen-printed stationery visit Ashalayam, they fund former street children who now manufacture the goods on sale. Their store on Mirza Ghalib Street is divided into the two sections: one is for hand-made goods and the other is for coffee and cake. www​.dbashakolkata​.org

A must-do tea rendezvous is Dolly’s Tea Shop in Dakshinapan Shopping Complex, Gariahat Road South. The external façade depicts a thatched hut and inside bright lanterns light up walls lined with old tea boxes. But it’s the bizarre tea brews that have made Dolly’s an institution – Tea Punch (laced with ginger ale and lemonade) and Tutti Frutti Tea (with fruit, ice-cream and jam). Teas for gifting get an individual Dolly touch with jute, cane, bamboo and ceramic wrapping. Find ​‘Dollys-Tea-Shop’ on Facebook. And whilst you’re there, be sure to visit Kashmir Arts Emporium on the floor above Dolly’s. They specialise in quality arts, crafts, pashminas and cotton suits, at really good prices. www​.india​mart​.com/​c​o​m​p​a​n​y​/​2​9​9​11290

The fascinating Indian Coffee House, on Bankim Chatterjee Street, was once the meeting place of radicals but now its crusty ceilings and grubby walls ring only with deafening student dialogue. Similarly, the cavernous Broadway Bar, on Ganesh Chandra Avenue, may be mistaken as the setting from a Clark Gable movie, with ceiling fans and a grimy marble floor.

Another early morning must-do is a visit to Hogg Market – the fresh food bazaar. The timing, before the heat sets in, allows for calm appreciation of the colourful array of goods being laid out for purchase.

Many visitors to Kolkata pay respects to Mother Teresa’s sombre tomb within the Sisters of Charity’s Motherhouse. There’s a tiny museum displaying Mother Teresa’s tattered sandals and buckled enamel dinner-bowl. Upstairs, ​‘Mother’s room’ is preserved in all its simplicity with a crown-of-thorns above the humanitarian’s modest camp-bed. www​.moth​ert​ere​sa​.org

Kolkata’s biggest addiction is religion, so your trip may well coincide with one of the numerous religious festivals. As such the roads are especially busy and brings with it the usual festive merriment of fireworks, food stands, loud traditional music and folk-dance performances, which all goes to making what is truly an incredible city. 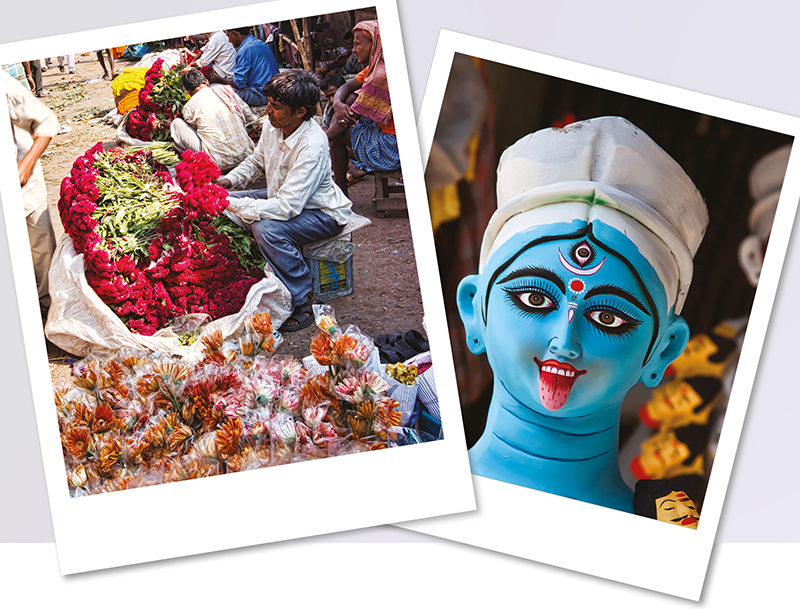 Like cities around the world, there’s poverty. To Western eyes India’s is unspeakably wretched. But to Kolkatans who are infinitely proud, they make do by pulling together, particularly in the face of adversity, for a perceived common good. They will queue patiently for indefinite periods and accept with rare fortitude the imposition of rationing. They are comfortable with faceless bureaucracies and tolerant of dictatorships. They have a natural gift for making excellent jokes about authority without seriously challenging it. They find normality in chaos, yet always take a moment to exchange pleasantries.

It’s sunrise and I’m sitting on the quay-side of Babu Ghat on the Hooghly River. I’m watching early morning die-hard Hindus bathe and make offerings in their Holy waters. The riverside ghats are ideal for people watching. Said an elderly Hindu monk who joined me on the quay: ​‘The western world may have all the watches, but we have all the time.’
www​.incred​i​blein​dia​-tourism​.org

Accommodations:
The Park Hotel has a niche luxury urban identity of its own as its 149 immaculate rooms are all lavishly furnished, each with 21st century mod cons. Other than its superb food, what sets it apart from the other larger chain hotels is its staff, who are all genuinely happy to serve.
www​.thep​ark​ho​tels​.com