Summer time and the living is easy, fish are jumping and the cotton is high….

For this late summer edition we leave the city, all be it briefly, to take a sneak peak at a couple of the hidden luxury locations favoured by the city crowd en vacances…

Provence-Alpes-Côte d’Azur is a treasure trove of unusual villages, some of which belong to the group of ​‘best villages in France’, and which are real gems.

Saint-Paul-de-Vence, an ancient feudal town protected by ramparts built on the orders of François I, it is renowned not only for its historical heritage but also as a haven for many artists and writers. It is home to numerous art galleries and the Maeght Foundation.

Roquebrune-Cap-Martin, a magnificent perched village, with a medieval dungeon, at an altitude of 225 m.

Sainte-Agnès, the highest coastal village in Europe at an altitude of 700m.

Tourtour, nicknamed ​‘the village in the skies of Provence’, is perched at an altitude of 635 m. With its stone-built houses and the keep of its medieval castle, it is the perfect spot if you want to get away from it all.

Eze Village
Eze village on the French Riviera is a very special place! A little corner of paradise located just 10 minutes from Nice and Monaco, where the scents of jasmine, bougainvillea and rose guide the visitor up the gently sloping, fresh, cool lanes.

You can easily imagine, a century ago, donkeys coming back from the surrounding countryside laden with figs, carob, olives and mandarin oranges from Eze. The bell tower of Sainte-Croix Chapel of the White Penitents stands as a reminder that this village belonged to Provence until the end of the 14th century. The choir of the Church of Notre-Dame-de‑l’Assomption boasts Baroque décor and an Egyptian cross evoking for Eze the mysteries of the goddess Isis. The aloe, euphorbia and cactus of the exotic garden, created on the hillsides surrounding the village in 1949 by Jean Gastaud, provide the finishing touch to this heavenly spot. 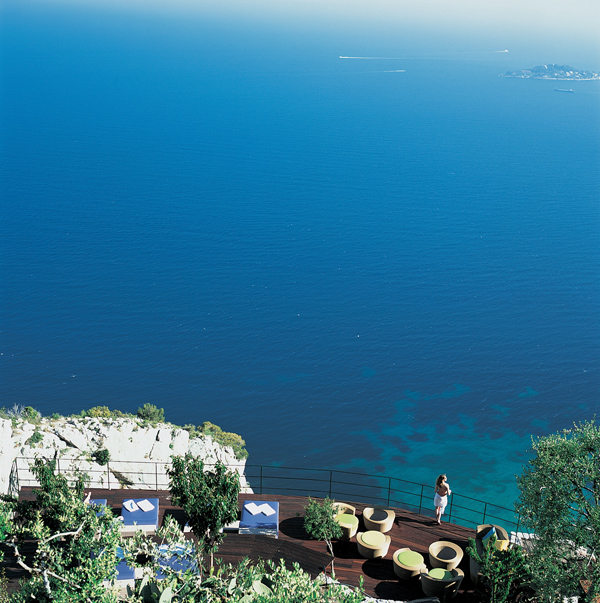 In 1953, Robert Wolf was so captivated by the Château de La Chèvre d’Or he turned it into a restaurant. Legend tells it that, on the advice of Walt Disney, Wolf bought up the village houses and converted them into rooms. The Hotel then became one of the 6 stopping-off points on the ​‘Route du Bonheur – Road to Happiness’, from which the Relais & Châteaux Association was created.

Different owners have succeeded each other and increased the number of guest rooms in the medieval village. Today the Château has 39 guest rooms and suites and features four individual restaurants and a bar.

Languedoc-Roussillon
Languedoc-Roussillon, popularly known as the Languedoc, is the central region of the south of France; it includes the western Mediterranean coast of France, stretching from the Rhone valley in the east, to the Spanish border in the south west, and comprises five departments, four of which are Mediterranean coastal departments.

The regional capital of Languedoc-Roussillon is the city of Montpellier, a thriving modern city in the Hérault, with a historic centre; other major cities in the region include Beziers, Nimes, Narbonne, Sete and Perpignan. 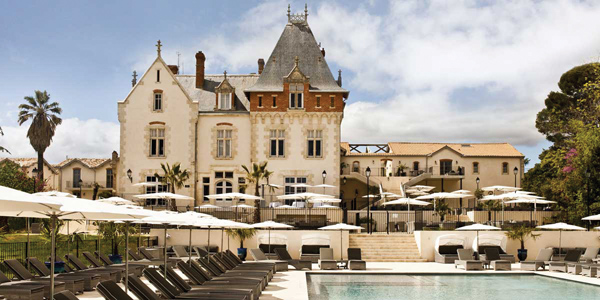 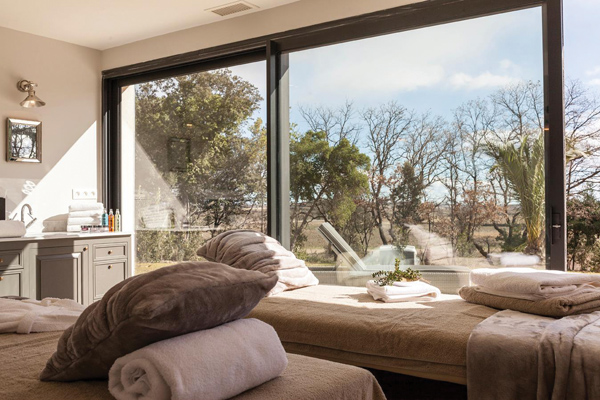 The Languedoc-Roussillon region is dominated by 740,300 acres (2,996 km²) of vineyards, three times that of the combined area in Bordeaux. Grapevines are said to have existed in the South of France since the Pliocene period – before the existence of Homo sapiens. The first vineyards of Gaul developed around two towns: Béziers and Narbonne. 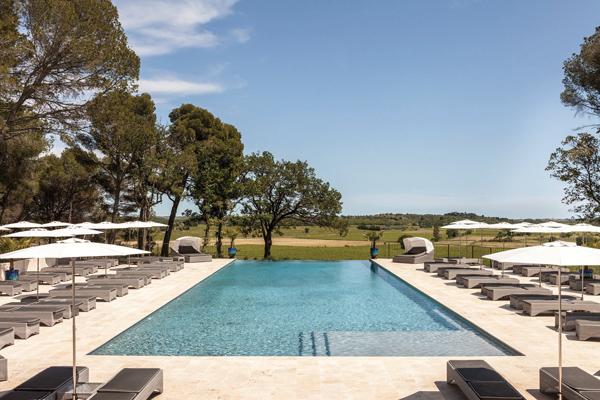 Lonely Planet described the Languedoc as ​“The Cinderella of the south…. once overshadowed by gorgeous Provence and the brash Côte d’Azur. Now, she stands as their equal, displaying a discreet charm that her more-visited siblings lost long ago”

Run by a former doyenne of the LA Spa scene, the spa features an inviting and sensuous 350m² Mediterranean sanctuary with 12m heated indoor pool, hot tub, aromatherapy sauna & hammam. Huge glass sliding walls flood the space with sunlight all year round and there are indoor & outdoor relaxation terraces, with great views over the surrounding vineyards.