Marine Court at 80 – Rebirth of an icon
2016 will make the 80th anniversary of the start of construction of one of the most iconic, innovative and – in some quarters – controversial building in East Sussex – the unmistakable landmark of Marine Court on the seafront in St Leonards on Sea. 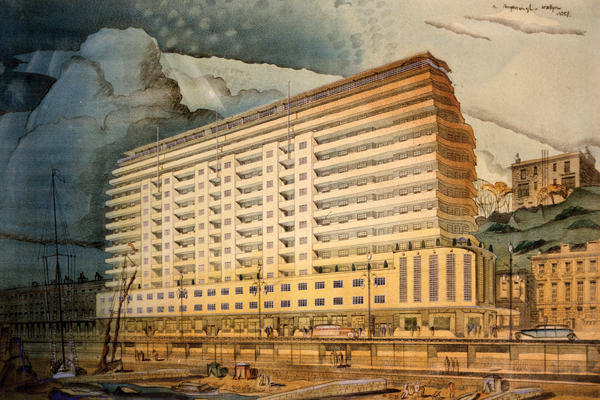 Fusing influences from the Modernist Movement and architects such as Wells Coates – who designed the Isokon Building (Lawn Road Flats) in Hampstead in 1934 and Embassy Court in Brighton in 1936 – with the other great design icons of the era, the ocean liner, Marine Court became the highest residential development in Britain (170ft. from basement to roof) when it was completed in 1938.

In the introduction of the original sales brochure from Marine Court in the 1930’s overtly states, the building was responsible for ​“the sweeping away of some of the picturesque and spacious but rather obsolete Georgian houses of on certain portions of the front” – 14 in all that were in a similar style to the remaining section of Marina Colonnade – and their replacement with ​“an ultra-modern colony of flats, huge yet in perfect taste.”

This last claim overlooks the fact that the original and even larger initial design for Marine Court proposed by the developers in 1935 was opposed by many local residents – especially those with property immediately behind the block on East Ascent who were about to lose their sea view – and amended by what the brochure only refers to as ​“consultations” to the design we see today. The brochure still boasted that ​“No greater tribute to its beauty could be paid than the fact that the original perspective was hung in the Royal Academy.” Drawn by leading perspectivist and architect Raymond Myperscough-Walker, his illustration of the original design is indeed very striking, the more so for the fact that he set it at night with the building illuminated – something he only apparently did when commissioned to illustrate a design he himself did not like! 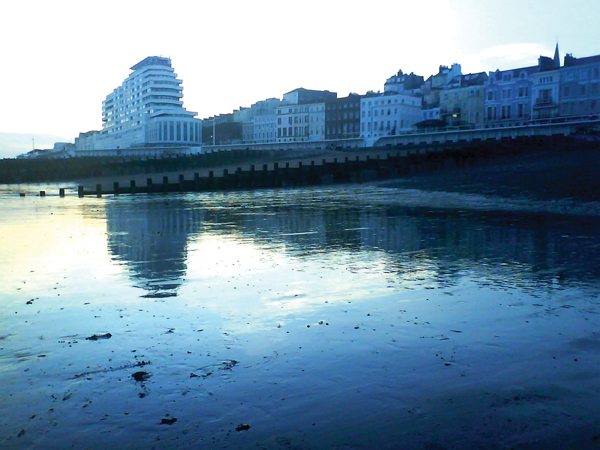 The arguably even more striking design that did eventually get underway in 1936 was one of the most ambitious building projects to use the still relatively new combination of steel frame and concrete for its construction (also to be seen in the nearby De La Warr Pavilion in Bexhill), anchored around the four towers that are marked by the four entrances (A,B,C,D) to the block still in use today and housing the four lift shafts. The published ​“Statistics About Construction” list includes the building having used 2000 tons of cement, 2500 tons of sand, 1.4 million bricks, 22,000 square feet of glass, 2100 tons of steel and 3000 gallons of paint.

However, the most iconic element of all in the creation of Marine Court is the overt inspiration of the RMS Queen Mary – the largest and most luxurious ocean liner of its day, launched in 1934 at Clydebank – in both its internal and external design and the entire concept of creating a self-contained community of residents where there every need could be met within the building itself.

Although not unique in referencing the great liners of the day – the Normandie Hotel in San Juan, Puerto Rico built in 1939 as its name suggests was heavily influenced by the great French liner SS Normandie – architects Kenneth Dalgleish and Roger K Pullen created a design that included the east end of Marine Court shaped to imitate the curved, stacked bridge front of the Queen Mary, a vertical south elevation with balconies imitating the promenade deck, and upper stories stepped-in from those beneath, those beneath like the immense hull of a liner. To accentuate this, the ground floor shop frontages were black, while the external walls were painted white.

Inside there were long galley corridors on the first and second floor, port hole doors and many other architectural references to the liner, but it was within the concept of ​“A Liner on Land” where all residents needs were met in-house that the building really took forward ideas from ocean travel to residential accommodation. The original brochure sets out the attraction of life in Marine Court and the type of resident it was aiming to attract:

“The flats are the last word in comfort and convenience – yet well within the scope of all middle class pockets. They incorporate fully all resources of cultured living today. Although each flat is in every sense a private home, it offers, when so desired, the amenities of a first class hotel. Meals can be served if desired privately from the restaurant in the building, spare rooms (now the small rear facing flats on first and second floors) are provided for unexpected guests, and tenants’ flats are kept clean for them while they are away”.

Marine Court was also designed to be all-electric ​“dispensing with coal fires and their resultant ashes, dirt and dust” and the block included thermostatic central heating, electric cooker and refrigerator, radio and television aerial, an internal intercom system and public telephone facilities, 24 hour centrally supplied hot water and ​“air conditioning apparatus” that still functions via a complicated system of fans and built-in air ducts that serves all parts of the building – so taking the famous 1923 quote by Swiss-born French architect, designer, urbanist and writer, Le Corbusier that ​“A house is a machine for living in” to a new level.

However, with the outbreak of the Second World War just a year after the completion of Marine Court, the ideals and idealism behind its construction were short-lived and never really had the chance to be fully realised. The grand restaurants and public rooms that now comprise the offices of Hannover House and the ground floor furniture showroom in the ​‘bow’ of the building never quite became the amenities of a first class hotel that the developers intended. The block became something of a troop ship on land rather than a liner, as a letter written in November 1941 by Sgt Rav Goode of the Australian Army illustrates:

“Had to pack our kit this morning, as we are being moved to St Leonards on Sea. Arrived at St Leonards railway station at 2.30pm and had to march about a mile to Marine Court where we are billeted. Marine Court is a concrete and steel building 15 stories high, we are on the tenth floor, no lifts working and so we climb 164 steps at least 8 times a day to our rooms, we use our own knife fork and spoon and we climb up to get them and down to each meal in the mess. My feet are not too good, the steps on the stairs are not very wide, and going up the heel doesn’t rest on the step at all, so up and down is higher than the T&G building in Adelaide isn’t so good.”

Another wartime casualty was the tunnel under the road, which joined Marine Court directly to the beach close to the Sun Lounge (now Azur), and was designed to allow residents to change for bathing in their flat and access the beach without having to negotiate the traffic or other onlookers. It was bricked up just in case the expected invading German Army decided to use it to fight their way into the building. It remains closed to this day.

The building itself survived the war, despite the map of bomb strikes in St Leonards showing one hit on the beach in front of Marine Court, two in East Ascent behind, and two on the bow end of the building at Undercliff. Some local residents say that the Luftwaffe used the building as a navigation point on their return home from air raids on London as it was such a large and distinctive structure!

In the mid 1960’s Marine Court underwent a major make-over and re-launch, with the lobbies updated and retaining many of the features still in evidence today. The 1965 brochure commissioned by long-term Managing Agents John Bray & Sons describes them as ​“Magnificently designed modern heated entrance halls with carpet to centre, mirrored walls and beautiful flowers” to welcome you to the building.

The flats were similarly updated and categorised by their number of rooms as ​“Type H” (1 room), ​“Type I” (2 rooms), Type L (3 rooms) and ​“Type Q” (4 rooms), all with private balconies facing the sea, with an additional reference to a ​“Type C” flat, which are the two room front-facing flats on the first two floors that do not have balconies but according to the brochure rarely became available.

By now the fortunes of the grand communal rooms and restaurants as originally planned had moved on, with The Grenadier Club and The Dolphin Ballroom in operation, the latter being the home of The Witch Doctor nightclub between 1964 and 1967. Among the names billed to grace that stage were The Animals, Nashville Teens, Dave Dee, The Merseybeats, The Equals (featuring Eddy Grant), David Bowie and The Who, of which appearance there is even some recorded footage from a documentary about the band that can be found on YouTube, along with an interview former club manager Tony Powell. The club reopened after refurbishment in 1968 as The Cobweb, running until a major fire in that section of the building in 1971.
The ground floor shops still boasted many high quality businesses, serving not just the residents of Marine Court above but the wider population of St Leonards too. Chief among these was the John Perring furniture showroom at 14, 15 and 16 Marine Court, plus Hammonds toys and sports at 5 and 6 (run by Jack Taylor, former manager of Leeds United and QPR!), Thanet School of Motoring at No 9, and Ronald White Cameras at No 19.

As with the rest of the area, the fortunes of Marine Court have waxed and waned with the popularity – or otherwise – of the English seaside and especially the traditional seaside holiday. As habits changed and newer and more exotic locations became affordable, many seaside resorts including St Leonards went into long-term decline. A building of the size and complexity of Marine Court was – and still is – very expensive to maintain, and several decades of neglect and freeholders who had little interest in the wellbeing of the building put the future of Marine Court into a perilous state, despite being recognised as an important piece of our architectural heritage when it was listed in 1999.

Finally, after a group of residents managed to buy the freehold of the building after a long battle with the previous owners, things have begun to change. A substantial programme of major renovation works are underway and will continue for several more years, as decades of neglect are put right and the building is brought up to current standards. The costs of these works are being principally born by flat owners through substantial annual maintenance charges, but with many new owners with a great enthusiasm for Marine Court and understanding what the building could once again become moving in – and new businesses opening up on street level – the future of Marine Court as it approaches its 80th birthday are brighter than they have been for a very long time. Why not come and see for yourself?