In 2018 this headline may not raise too many eyebrows. Such occurrences, even if not always off our own coasts, have now become commonplace. Reports from the Mediterranean and elsewhere continue to highlight the cruel plight of refugees taking to the sea in boats to escape despotic regimes in their own countries.

Seventy eight years ago the situation was little different. Thousands of refugees were then fleeing the jackboots of Adolf Hitler’s army as it marched across Europe. The people of the countries of Holland, Belgium and France were on the front line. Only the English Channel separated these desperate people from reaching the sanctuary of Great Britain. By May 1940 the situation was deteriorating by the day. The award-winning film ​“Dunkirk” graphically depicts boats full of retreating British and French soldiers who had arrived on the beaches of northern France waiting to be evacuated in what Winston Churchill described as a ​“miracle of deliverance”. A month prior to this, on Tuesday 14th and Wednesday 15th May 1940, another heroic escape took place. This time from Holland. 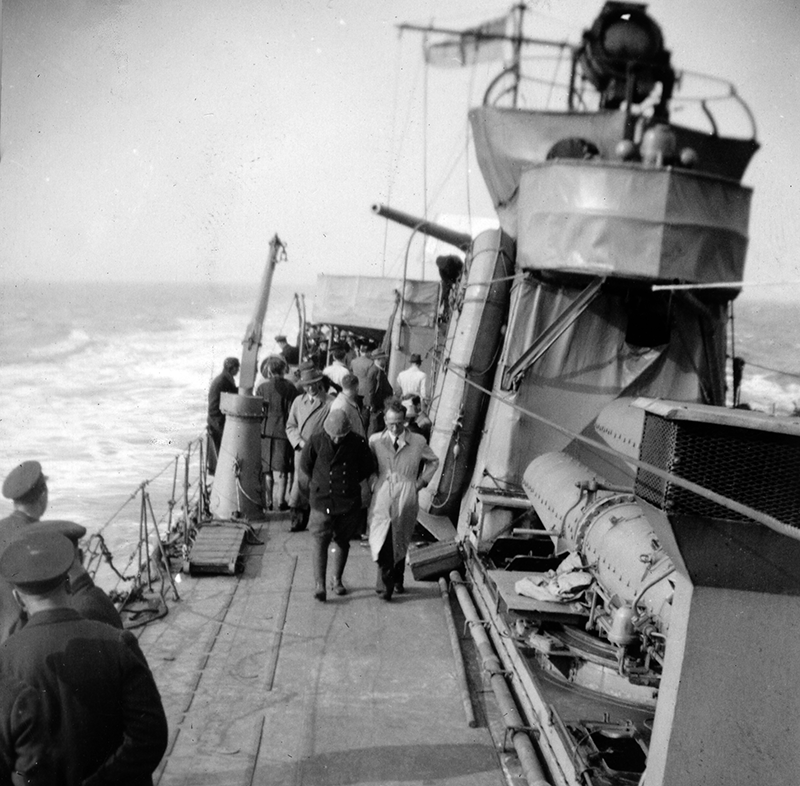 The German invasion of the Netherlands had begun at 4am on Friday 10 May with the the bombing of an airfield south of Rotterdam followed by the dropping of paratroopers. German troops were soon entering the southern outskirts of Rotterdam, the commercial heart of Holland. The seat of government, The Hague, was twenty miles to the north west and Scheveningen, The Hague’s main seaside resort, had a large fishing harbour where a lifeboat, the Zeemanshoop – the Seaman’s Hope – was berthed. By Monday 13 May it was clear the the military situation was hopeless and that morning, the Queen of the Netherlands, Queen Wilhelmina, left for England from the Hook of Holland aboard the destroyer HMS Hereward. In the early hours of Tuesday 14 May the British Naval Attaché at the The Hague arrived in Scheveningen (the Hook of Holland was now in German hands) and M J Bruin, skipper of the Zeemanshoop, took him and his staff out to another waiting Royal Navy destroyer which they boarded under fire from German aircraft before returning safely to harbour. 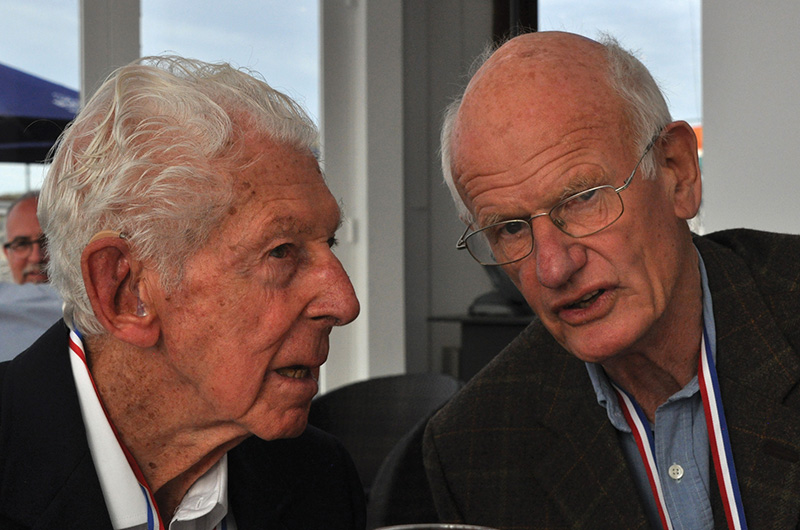 Later the same evening, in desperation to get away from the harbour, four university students hi-jacked the Zeemanshoop by breaking open the padlock on the hatch to the engine room. Although it is unlikely they would have been successful in starting the engine without the advice of a local fisherman, there were chaotic scenes on the quayside as whole families, mostly Jewish, some Dutch and other refugees from Germany, all desperate to escape imprisonment in the Nazi concentration camps, surged on board, A soldier fired a warning shot over the heads of those trying to board the overcrowded lifeboat and one man fell into the water making a desperate leap to join his family. Fortunately he was hauled onboard before the dangerously overloaded Zeemanshoop moved slowly out of harbour at 9pm and headed north west on a course for England. With 46 men, women and children onboard, and a temperamental and unfamiliar engine, it was fortunate the sea was comparatively calm.

The four students who hijacked the Zeemanshoop were young and single. They were what the Dutch came to call Engelandvaarders, English Travelers, men who had left their country in order to continue the fight against the Nazi invaders. The oldest was Harry Hack who as the only one studying mechanical engineering had any knowledge of marine engines. There seems little doubt that the boat would have not got very far without him. He assumed command from the outset and was recognised by the others as their captain. Hack, Karel Dahmen and Jo Bongaerts were all students at Delft University. Lou Meijers was a first year medical student at Groningen. 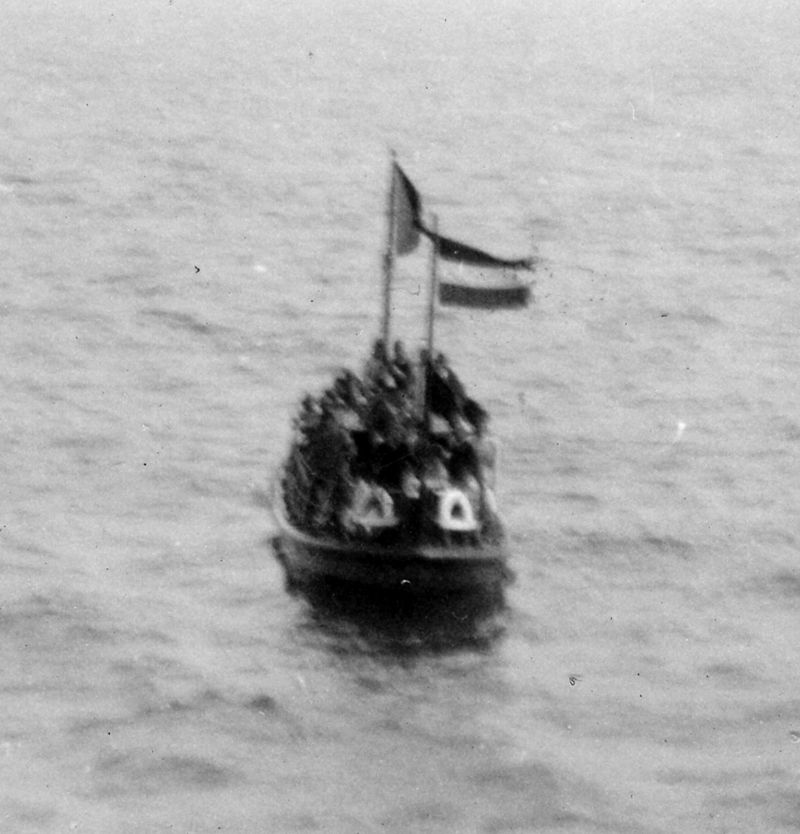 The student crew wrote down the names of all those onboard the Zeemanshoop on the back of an old chart which has since been widely reproduced, The chart itself is now in the regional archive of the Department Noord Holland in Haarlem and has proved to be the key to tracing the families of those who fled to avoid being either imprisoned or to join the fight to free their country.
By the early hours of Wednesday 15 May the Zeemanshoop had sailed to within a few miles of the English the coast. With its decks crowded with men and women, flying two large Dutch flags and making distress signals, it was sighted by the Royal Navy destroyer HMS Venomous which was escorting two requisitioned Southern Railways paddle steamers, HMS Sandown and HMS Rye, sweeping for mines near the Goodwin Sands off the Kent coast. After the refugees had been taken onboard, the ship proceeded to Dover where they were landed the same evening. The refugees from Germany were later interned on the Isle of Man as ​“enemy aliens”. The Dutch refugees were treated as victims of Nazi aggression and provided with accommodation and other practical assistance by the Netherlands Emergency Committee.

After its passengers and crew had boarded HMS Venomous the Zeemanshoop was taken to Ramsgate by AB Harold Knapton and a small crew from the destroyer. Somewhat surprisingly it did not take part as one of the ​“little ships” in the evacuation from Dunkirk but was instead sailed along the south coast from Dover to Falmouth by Lieutenant Dirk van Beusekom of the Royal Netherlands Navy. For the remainder of the war the lifeboat became a communications launch at Holyhead, Anglesey and at Harwich in Essex. At the end of hostilities she was returned to the Dutch Navy remaining in service until 1976.

Astonishingly, the Zeemaanshoop is still afloat and has been bought by a Foundation and restored to her pre-war appearance. On 14 May 2015, the 75th anniversary of the rescue, she arrived in Schveningen for a reunion of over 100 families and friends of the crew and refugees, These included one of the original hi-jackers, Karel Dahmen, now 98 years old and living in Austin,Texas, together with the son and daughter of the Commanding Officer HMS Venomous, Lieutenant Commander John McBeath. The lifeboat remains in the port to this day.
The voyage of the Zeemmanshoop and the story of its passengers and crew whose lives changed forever when they left the small port of Schveningen now has an almost mythical status in the seagoing annals of a country with a long and proud maritime history. It also has deep resonance with the world we live in today.
The full story of HMS Venomous, including its key role in the Zeemanshoop’s escape to England, can be found in the book ​‘A Hard Fought Ship, the story of HMS Venomous, published by Holywell House Publishing