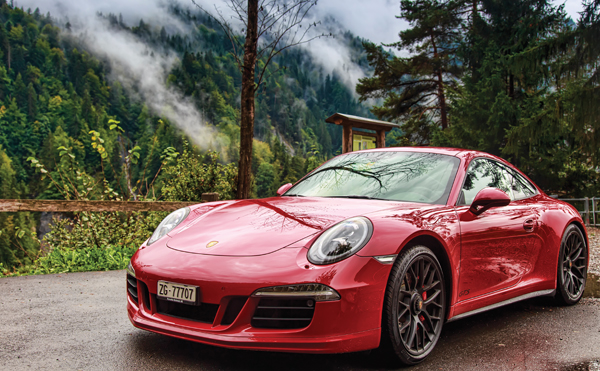 There’s no better excuse for getting behind the wheel of a luxury car than a road trip; especially when your destination is one of the world’s most breath-taking locations.

When compared to the United Kingdom, which is six times larger, Switzerland is petite. In a country packed with Alpine delights, four languages and the world’s topmost producers of time, sights are of an epic scale but distances between them short. Thus, against a backdrop of immense forested mountains, lush meadows, azure lakes and cobalt-blue skies, I travelled across just a small part of the immaculate alpine passes and ravines and saw Switzerland as it’s meant to be seen – from the road driving a Porsche 911 Carrera 4 GTS.

As time was short I needed to focus on the sights I most want to experience and planned my Grand Tour road trip accordingly – creating a driving nirvana through Switzerland’s south-east corner, travelling just 650km in four days. 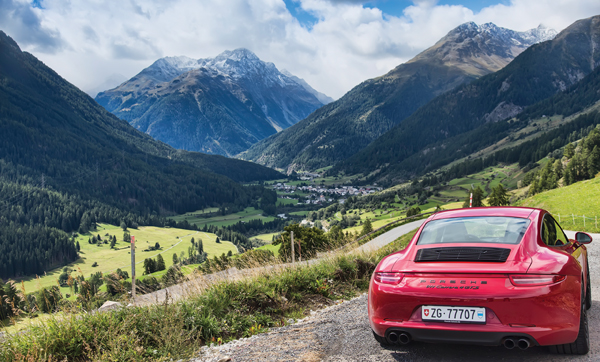 Within an hour of leaving Zurich I found myself getting up close and personal with some of the most spectacular eye-candy on the planet. All my petrol-head expectations were surpassed and replaced by the stuff of motoring dreams – driving on twisting asphalt, cobbled streets and snow-covered mountain tracks.

My first Grand Tour night I spent in Bad Ragaz where I checked into the multi-award winning Hotel Quellenhof (acclaimed as one of the world’s leading spas) whose privately owned 124-acres of landscaped gardens have been transformed by art.

Making a slow start to Davos, the highest town in Europe, I took a short diversion to savour the views from the elegant architectural masterpiece of the Salginatobel Bridge, enroute driving through villages of timber-clad homes covered in larch tiles – all with their grain stores on stilts. A further detour delivered me to the Walserhuus Sertig, a traditional chalet restaurant with a panoramic mountain view and a local speciality of smoked bacon and pearl barley soup served by traditionally dressed waitresses adorned in time-honoured costumes. 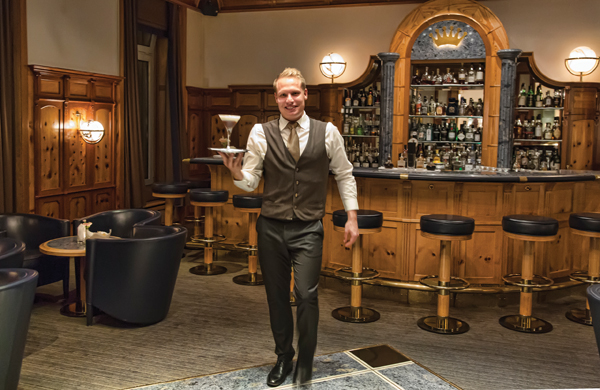 Before heading to my designer Grischa Hotel in Davos, once an isolated mountain-farming village turned winter tourist resort, I stopped at BierVision in Monstein, the highest altitude micro-brewery in Europe. Following a guided tour I took to their basement bar, Gambrinus, where I sampled their terrific whisky, eggnog and cured meats.

Leaving Davos I set the GPS for St. Moritz. Reaching an elevation of 2383m, the Flüela Pass goes almost unnoticed in the pantheon of Europe’s great driving roads and ironically, I drove it enroute to the most lauded, the Stelvio pass. From Davos the Flüela runs for the best part of 28kms, mixing tempting straights, gorgeous curves and 37 proper bends. The road starts to climb almost immediately, at first gently and then more precipitously towards the peak. The 911 ate the first few kilometres with disdain, yet the engine note barely rose above a snarl. At this point, and in the absence of any real testing corners, it occurred to me that I had neglected to engage ​‘Sports Mode’ – which changed everything.

I pointed the 911’s nose to northern Italy and the Stelvio Pass, the ascent of which offers 75 vigorous full lock hairpin bends and demanding serious driving know-how. Shortly before reaching the summit the scenery changed from picture-postcard to a breath-taking snowline vista. Towards the top it was near impossible to get the speed up as the bends were so close together. A few final, dramatic hairpins had me at the summit and into a small parking area where I stopped to fully appreciate the view and vertical drop-offs.

Descending was just as challenging; but the rear-biased weight distribution of the 911 pushed me out of the corners and launched me into bends at great velocity and a gorgeous throttle blip thrown in prior to each downshift under braking.

I’ve never thought of the 911 as a handsome cars but this variant is by far the easiest to look at. It’s 10mm lower than the normal Carrera S – in fact 20mm lower with optional sports suspension (PASM) fitted to my review car – the GTS also has wider hips, track, and huge tyres front and back to keep the whole thing dirty side down. It has a slightly longer wheelbase too which adds to its looks; and the increased track further adds to the feeling of stability in the corners.

It was my distinct feeling that I’d already learnt all I needed to know about the GTS. Thus, with reluctance, I rolled off the pass and into the pretty village of Guarda where I lunched at the splendid Meisser Hotel.

Later I took myself off to my final destination – the champagne climate and seductive shops of St Moritz. I stopped for a cheese making demonstration at the Alpine Cheese Dairy Morteratsch, then did a guided tour of St Moritz where I discovered the Engadin nutcake, Hatecke’s triangular cured venison sausage (displayed like jewellery in bottom-lit cabinets) and found a mini chocolate factory in the basement of the Confiserie Hauser. Fractionally fatter, I put my feet up at the Grand Hotel Kronenhof’s fabulous bar, taking in an expertly blended Black Russian.

Heading back to Zurich, I passed several picture-book villages and more than once stopped to marvel at this diminutive country’s unparalleled beauty. Switzerland is truly the land of superlatives – with the tastiest of roads. Another mountain pass came into view and I immediately engaged ​‘Sport Mode’, all fluffy thoughts evaporating.

Accommodations
Bad Ragaz: According to Condé Nast Traveller’s Spa Guide, Hotel Quellenhof, with its 267-rooms, is the best medi-spa in Europe and is internationally recognised for its Medical Health Centre in diagnostics, preventative care and rehabilitation – which I can personally attest to as I arrived with aches and pains which were swiftly dealt with by an onsite physiotherapist who vigorously pressed and kneaded me until I could be rolled up like a ball of pastry and reshaped into a bagel. The Quellenhof also have a casino and two golf courses – one of which is an 18-hole PGA course (the European Championship is held there every year); a Porsche and a Harley Davidson are made available to guests for a day loan (included in room rates); and they have six culinary diverse restaurants; for light, easily digestible and freshly prepared Thai and Chinese specialities dine in Namun. Room rates start at CHF490. www​.resor​tragaz​.ch 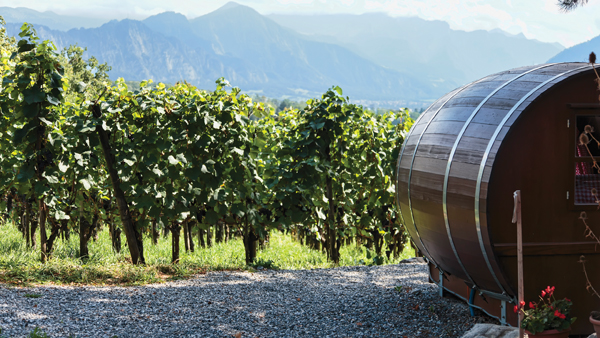 Bed-in-a-Barrel: There’s a quirky accommodation option not far from Bad Ragaz – converted wine barrel stays on a vineyard. CHF150 buys a barrel for two, a fondue dinner, a bottle of regional wine, linen and a farmer’s breakfast.
www​.schlaf​-fass​.ch

Davos: The Grischa Hotel is a chic 93-room modern designer hotel, dressed in sultry colours and draped in mood lighting. Despite all the trendiness, it’s practical and comfortable. The sophisticated Pulsa Bar, with its leather furnishings and fur throws, makes for cosy and exclusive pre-dinner drinks. The five restaurants have turned this hotel into a sensational gourmet destination. Rates start at CHF115. www​.hotel​grischa​.ch

St. Mortiz/Pontresina: The elegant Grand Hotel Kronenhof, just 6km from St. Moritz, provides the best of both worlds, providing the glitz of St. Moritz whilst soaking up the peace of a mountain village. Discerning travellers will enjoy this historic hotel’s reception areas which are all heavy draped in floor-to-ceiling silk curtains. The pièce de résistance is dining in the gourmet ​‘Grand Restaurant’, a magnificent neo-baroque banqueting hall, complete with a rococo ceiling. My bedroom, one of 112, is located in the Kronenhof’s new and contemporary Spa wing with a balcony overlooking the River Flaz and the imposing St. Moritz mountains. Rates start at CHF465. www​.kro​nen​hof​.com

Lunch Stops
Walserhuus Sertig in Davos-Sertig: Great selection of regional dishes – sample their potato rosti. Just a short walk from the restaurant is a spectacular waterfall and hiking route beyond. www​.walser​hu​us​.ch

Hotel Meisser in Guarda: The hillside location of the hotel is simply breath-taking, so be sure to ask for a window seat in their dining room where you’ll be looking out at some of the most beautiful mountain scenery in the world. The salmon, smoked with wood from local vines, served on a dill sauce is delicious. www​.hotel​-meiss​er​.ch 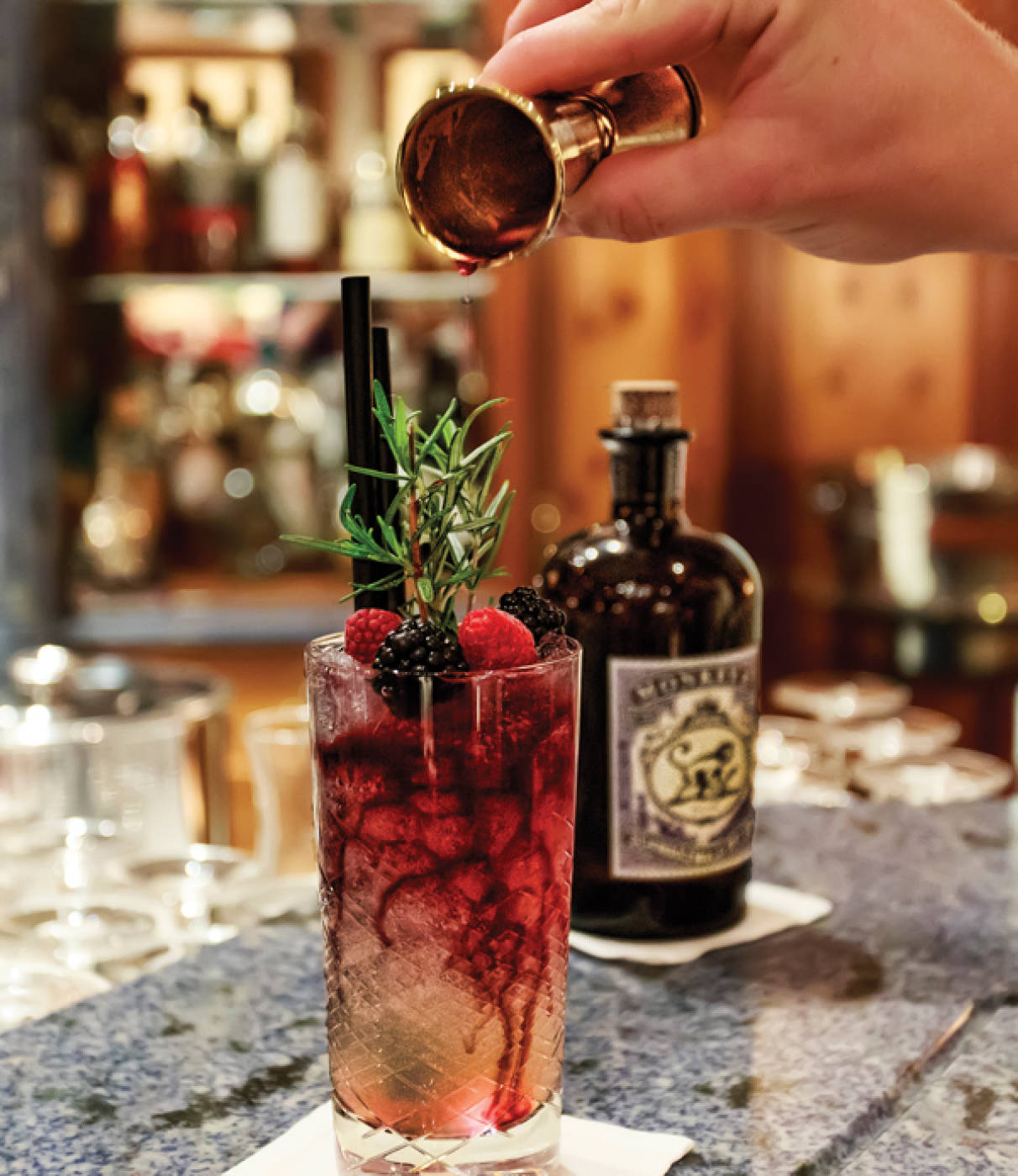 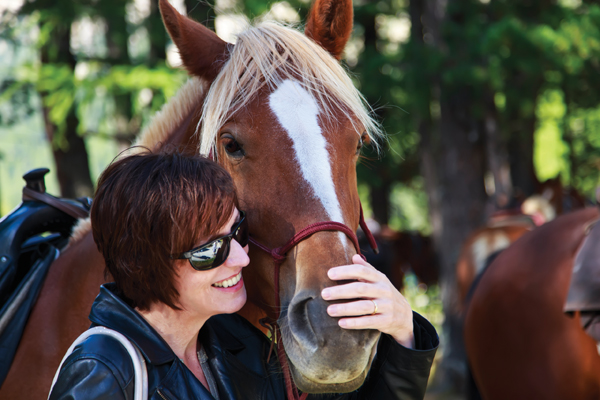 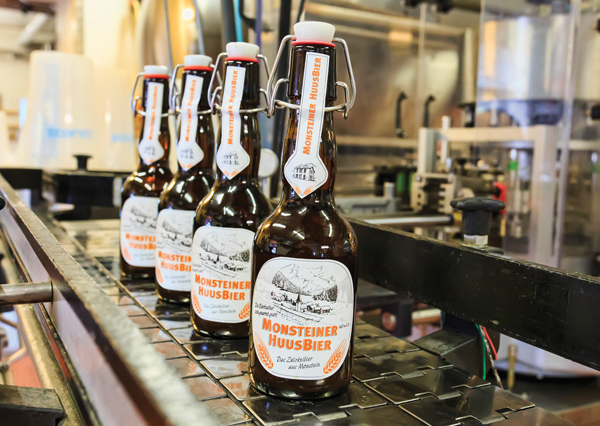 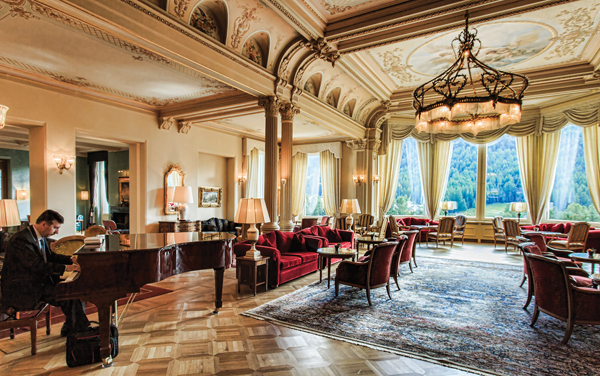 Getting there
SWISS Air, part of Star Alliance, flies from London City to Zurich (90 minutes) several times a day. Return trip fares start at £115. At breakfast, two rounds of croissants and coffee make their way around economy; business class is offered something more substantial; but everyone cheers up when indulgent little Swiss chocolates are handed out. www​.swiss​.com

For more information about the Grand Tour see www​.myswitzer​land​.com. For details of the Porsche see www​.porsche​.com/uk