With the buy-local movement gaining momentum in the USA, more Americans want to support local farmers and artisan businesses, which has created an opportunity to bring a European-inspired food hall to Chicago.

Demonstrating the City’s adaptive reuse approach to just about everything, they converted an unused underground storage facility into a Market space. It may not initially feel more than a huge concrete bunker, with an occasional train rumbling overhead – but this space rocks! Despite the industrial feel and having just a few windows, the stall owners provide a fun and colourful ambience with their constant banter and brightly coloured stands. Then of course, there are the spicy smells that hang above the tables, shrouding those contained within its aromatic reach.

Access the market through the Clinton Street entrance and turn left, beginning your market tour at Pastoral Artisan Cheese, an authentic neighbourhood cheese shop, small production wines, cheese loving beers and freshly baked breads. Adjacent to Pastoral is Fumare Meats. The proprietor, former banker, Dick McCracken, offers a delicious variety of locally made hams, smoked sausages, bacons served on a ciabatta or baguette. The highlight of his stand is the Montréal-style smoked meat (think pastrami) that is cured and naturally smoked, peppered and slow-cooked on the premises. 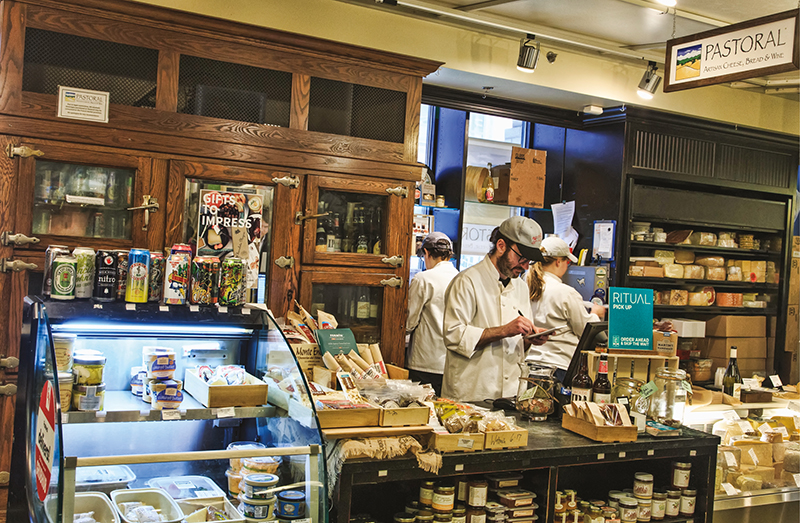 Next to Fumare’s is Vegan Now for vegetarian soul food, then Firenze for all things Italian like authentic Florence sandwiches made with homemade schiacciata bread, brushed with extra virgin olive oil and sea salt. For something to drink go to B.I.Tea for authentic ​‘Bubble Tea’ from China – try their hand shaken Iced Lychee Green Tea. Then there’s the organic, raw and vegan prepared foods at RAW (Raising Awareness Worldwide), their ​“pastas” are terrific, and be sure to pick up a RAW chocolate truffle.

For Mexican favourites like tacos, tostadas or burritos, check out Buen Apetito. There’s authentic Vietnamese cuisine at Saigon Sisters and at Frietkoten, a Belgian ​‘fry shack’ experience hand cut fries served in a paper cone with 20 different sauces – all washed down with a craft Belgian beer. Alternatively, if you’re in the mood for Korean cuisine, head to K‑Kitchen for classics like spicy garlic pork or Teriyaki Chicken.

Visible from the concourse entrance is Vanille Patisserie, specialising in cakes and handmade chocolates, opposite is City Fresh Market focused on local produce and fresh, hormone-free grass-fed beef. Adjascent is Aloha Poké a Hawaiian staple, then Polpetti who specialise in meatballs. Les Fleurs for exquisite floral arrangements, opposite is Latin inspired Lito’s Empanadas which is beside Loop Soup who serve a simple ​‘grilled cheese and soup’, While Beaver Coffee + Donuts do imported coffee and mini donuts – made from scratch every day.

Then there’s Santullo’s New York style thin based hand-tossed pizza which, the proprietor claims, has been perfected in Chicago. Next door is Lillie’s, known for their low-and-slow barbecued meats and acclaimed as the ​‘Best New BBQ Restaurant in the Country’. For a curry kick there’s Klay Oven Kitchen, a gourmet Indian eatery concept, beside which is Loop Juice with squeezed-to-order fruit and vegetable juices. If you’re watching your waistline you may want to bypass Antoine’s FliP Crepes and not think of their perfect Blueberry Lemon Crêpe. 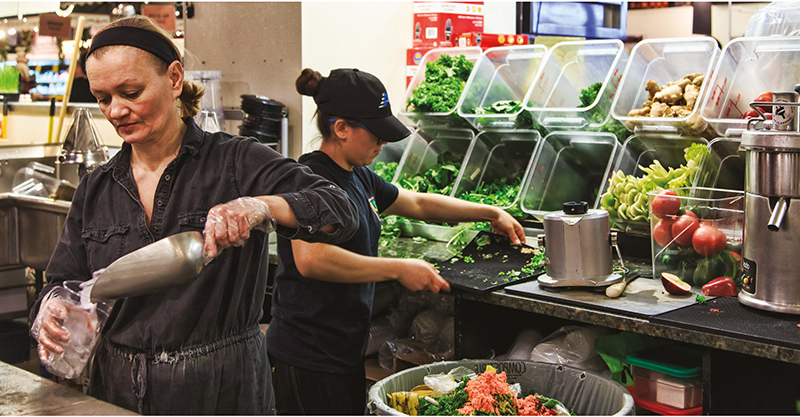 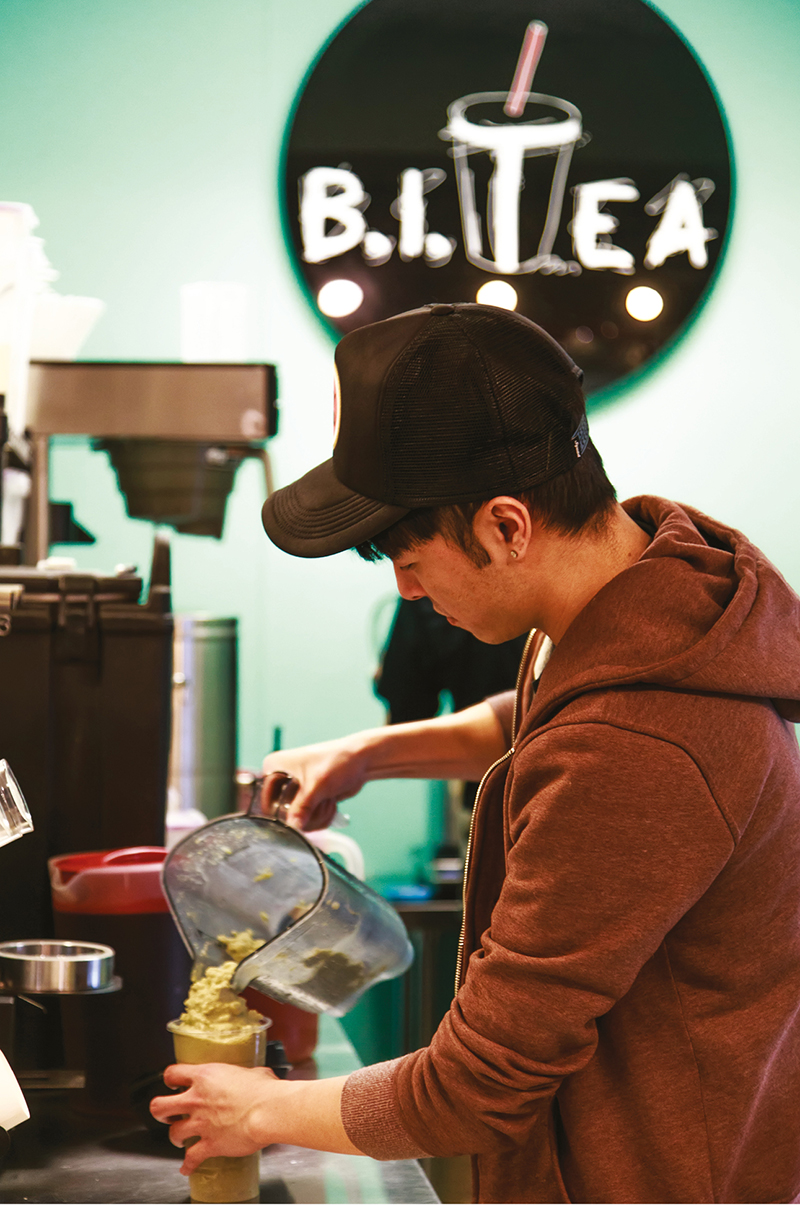 For a seriously good eat take in a simple lobster roll at Da Lobsta who merely add mayo and garlic butter. Visit the truffle bar of Lolli and Pops, the purveyors of sweetness. Pierogi Crib serve Polish favourites like freshly made pierogis, blintzes, potato pancakes and golabki. For Peruvian street-style seafood cuisine (with added chilli oil), head to Tiger Ceviche.

For the only kosher food in Downtown there’s Bebe’s Kosher Deli, with everything from Matzah ball soup and Knishes to Crispy Potato Latkes. For a little elegance there’s Le Café du Marche who offer French lunch classics to go. For Japanese gastronomy, there’s EJ Sushi – a small seating counter allows you to enjoy conversation and sushi artistry. If you’re wanting comfort food you need to sample the Mac and Cheese at Wood Fire Counter, and for something uniquely European, take a look at The French Lunchbox’s menu.

Stalls are brimming with fresh and colourful artisanal food – handmade macarons at Vanille Patisserie, bite-sized donuts at Beavers Coffee + Donuts, Belgian fries and beers at Frietkoten, spicy Indian food at Klay Oven Kitchen, and eye-catching chocolate truffles under the glass cabinet at Lolli and Pops. Take your time, mooch around amongst the stalls, gathering your lunch of freshy-made pasta or speciality cheeses and a baguette, followed by a coffee and pastry – now secure a table at the large cafeteria-styled eating area and dig in.

Tip: Avoid the noon to 1 pm rush, when the lunchtime crowd from around the city pack the place. Also, beware the limited hours: they’re closed on Sundays, and generally shut up shop at around 19h30 on weeknights and on Saturday they close a little earlier.