If you appreciate the romantic, traditional, authentically British aspects of London, with its architectural character, then you’ll love The Draycott – an exclusive boutique hotel in the heart of London’s Chelsea area, characterising the quintessential charm of the Edwardian era. 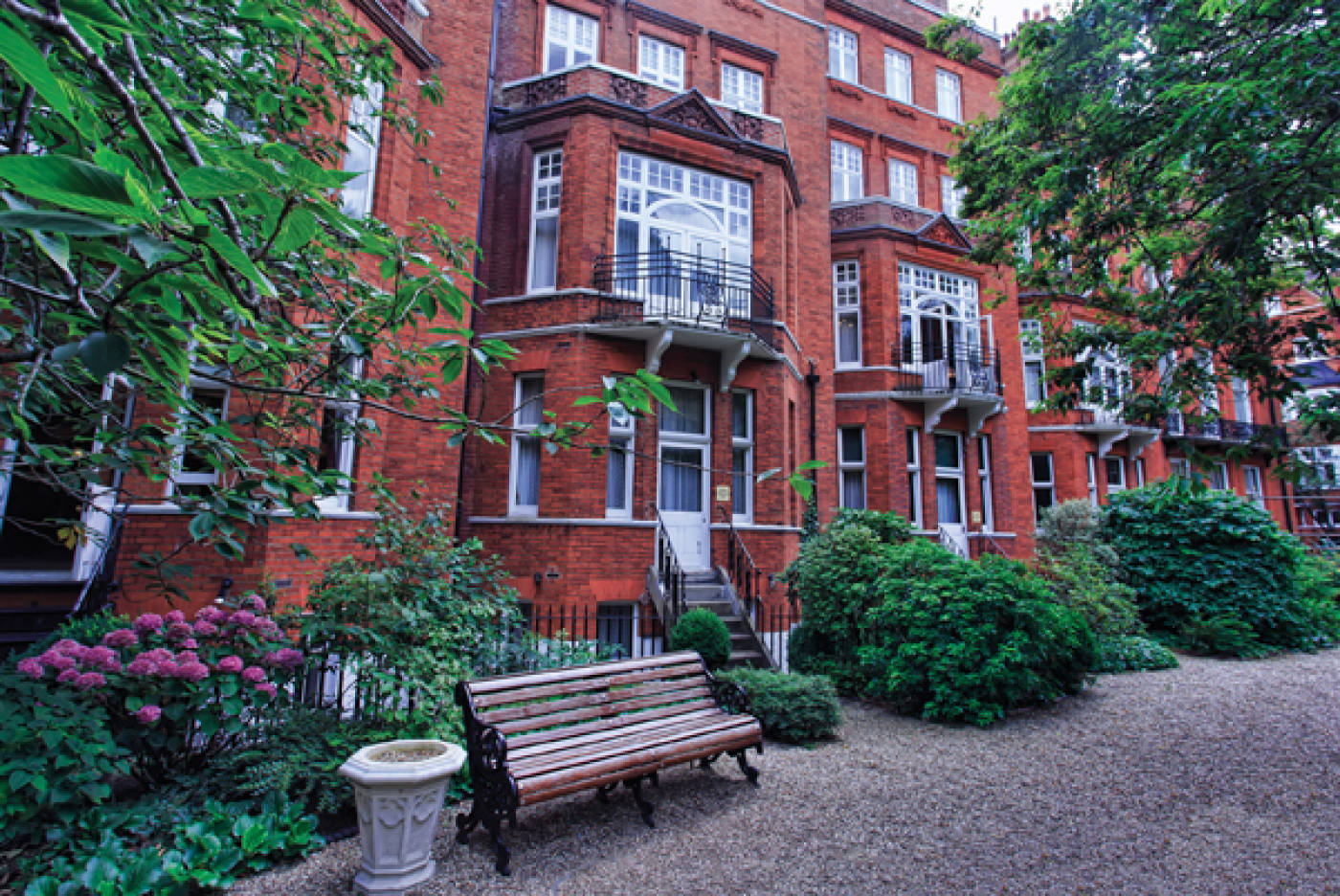 The hotel, a conjoined row of refurbished Edwardian townhouses (previously a gentleman’s club), is located in a quiet residential area, a stone’s throw from Sloane Square on an unassuming street in one of the poshest parts of London. It has been cleverly restored into a first class hotel but is difficult to identify as its red face-brick façade is not marked by any major signage other than a subtle brass plate announcing it to be ​‘The Draycott’ and Union Jack flag. When you arrive at the front door you feel like a resident of one of the neighbouring upscale apartment buildings because you walk up a short staircase and buzz to enter the foyer; and when you step over the threshold you at once feel as if you’ve entered the private and very elegant Edwardian home of royalty.

Immediately on your left is a library dressed in comfortable antiques, gilded original works of art and a fireplace. Beyond the small reception desk is a cavernous reception room featuring English country house type antiques, expensive art and a gorgeous view across the large communal garden behind the property, where one can sit on a fine day.

I took a drink at the honesty bar then met the bellboy who ran my bag up the stairs. The elevator is tiny and the perfect size for two people wanting to get cosy. Although the labyrinth of twisty stairways adds to the charm, this is not the place for the physically challenged. If stairs are a problem ask for a room on a floor where the lift stops. 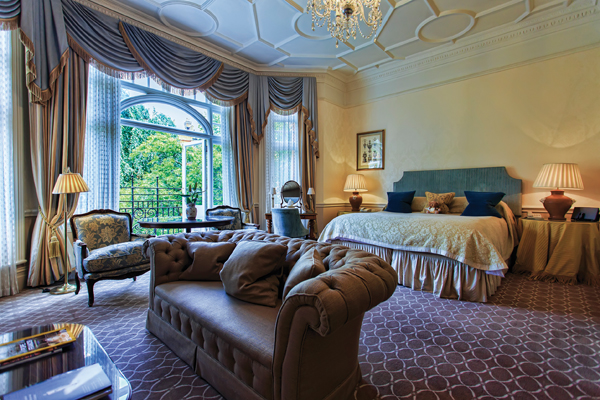 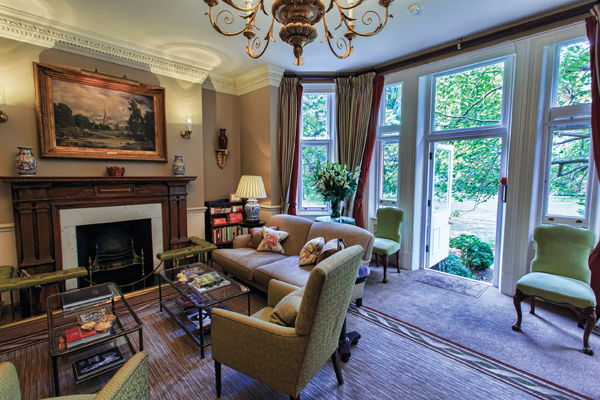 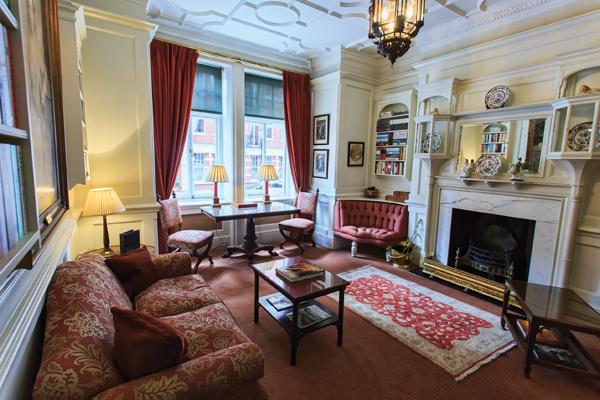 My room is what one might expect in a typical Edwardian style home with rooms not numbered but rather named. Each of the hotels thirty-five well-appointed rooms and suites is themed to reflect the personalities of various British authors, playwrights and entertainers. I spent the night in the enormous Vivienne Leigh suite, which is simply outstanding with its Hollywood bathroom, a full kitchen (with all the white goods), an elegant seating area around a fireplace, an antique desk to one side, a huge comfortable bed, a flat-screen TV hidden in one of the bed-facing cupboards, tall windows and two wingback chairs framing balcony doors overlooking the garden. But it’s the little things that made an impression like the teddy bear on the bed, the homemade shortbread, the collection of literature in the room, free wi-fi and my name behind a brass plaque on the door.

In terms of food they do a good Continental breakfast (£17.50) and an English breakfast (£21.95) taken either in-room or in the breakfast room. Although the Draycott doesn’t have an advertised restaurant for dinner they do offer a small menu for in-room dining. As such the Concierge made a dinner reservation at ​‘The Botanist’, a highly acclaimed restaurant on Sloane Square very popular with the after-work crowd.

The Draycott is a gem of a hotel in the fabulous Chelsea neighbourhood which is a quiet oasis dripping with money. It’s one of the world’s poshest locations and is studded with excellent boutiques, good pastry/coffee shops, restaurants you need to book month’s in advance and is perfectly located for all the top fashion brands like Harrods, Cartier, Valentino and Prada. The shopping on Sloane Street and Kings Road surpasses even New York City’s 5th Avenue – and nothing is cheap. In the festive season window displays and Christmas street lights on Sloane Square, Duke of York Square and Kings Road is spectacular.

The snow and cold will soon have you returning to your warm little piece of heaven in the midst of Christmas madness for the afternoon tea and cake taken in the garden-facing reception room, as well as the evening champagne which flows after 6pm as well as the late-night hot chocolate and biscuits – which brings to mind the impeccable, somewhat understated, service as the staff identity you by name, not room number, which in itself as a telling thing.

The Draycott is not a corporate-style hotel, its run on old fashioned principles of service and courtesy. Sure, there are numerous other hotels with more amenities but you’ll struggle to find one in the W1 post code that’s as pleasant. The hotel’s prices are almost reasonable compared to other properties like the Dorchester or the Connaught, and there are special packages available during the slow seasons.

Things to do in the area

On the tourist map
Within walking distance is Buckingham Palace, Big Ben, Westminster Abbey, the Houses of Parliament and numerous museums like the Saatchi Gallery, Victoria & Albert Museum, the Natural History Museum and Kew Gardens. 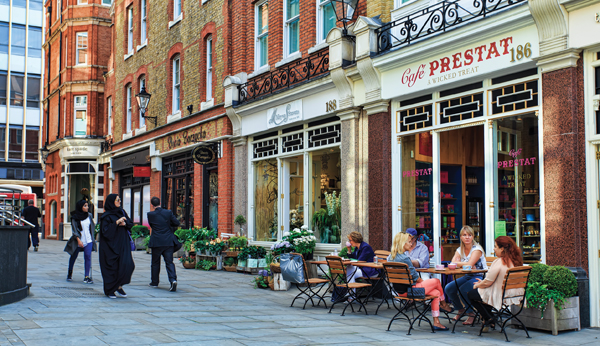 Shopping
On Pimlico Road, near Sloane Square, is a little enclave of shops with a cosy village feel about them. Here you’ll find everything from flowers and food to fashion; it even has a fabulous weekend farmers market. Home to niche luxury brands and alongside artisan food shops, is the beautifully sophisticated Elizabeth Street in Belgravia; and on King’s Road is the 1930 curved glass architecture of John Lewis’ department store, opposite which is the pedestrianised Duke of York Square, cheek to extravagant cheek with glossy brands like Joseph, Coccinelle and L.K. Bennett. 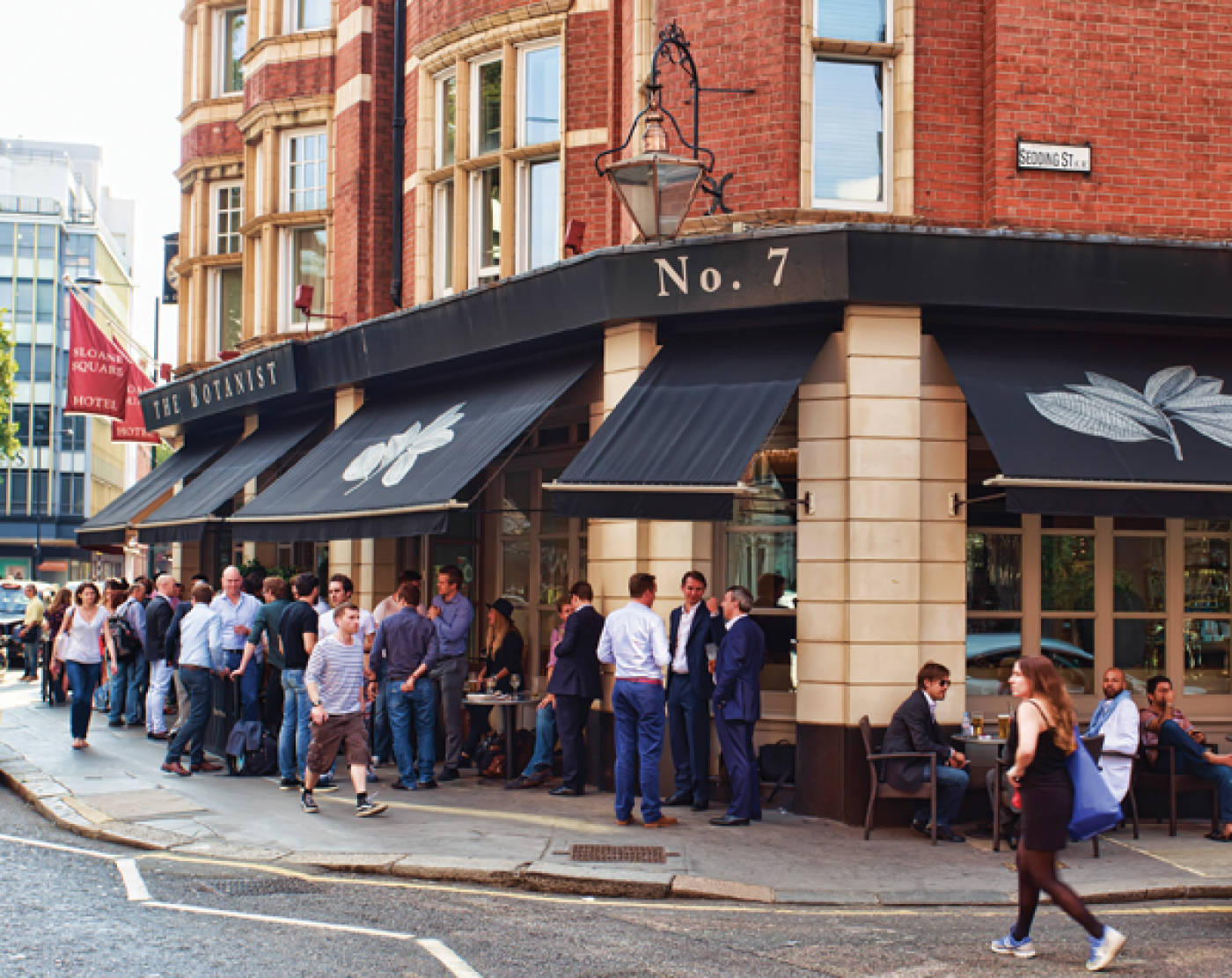 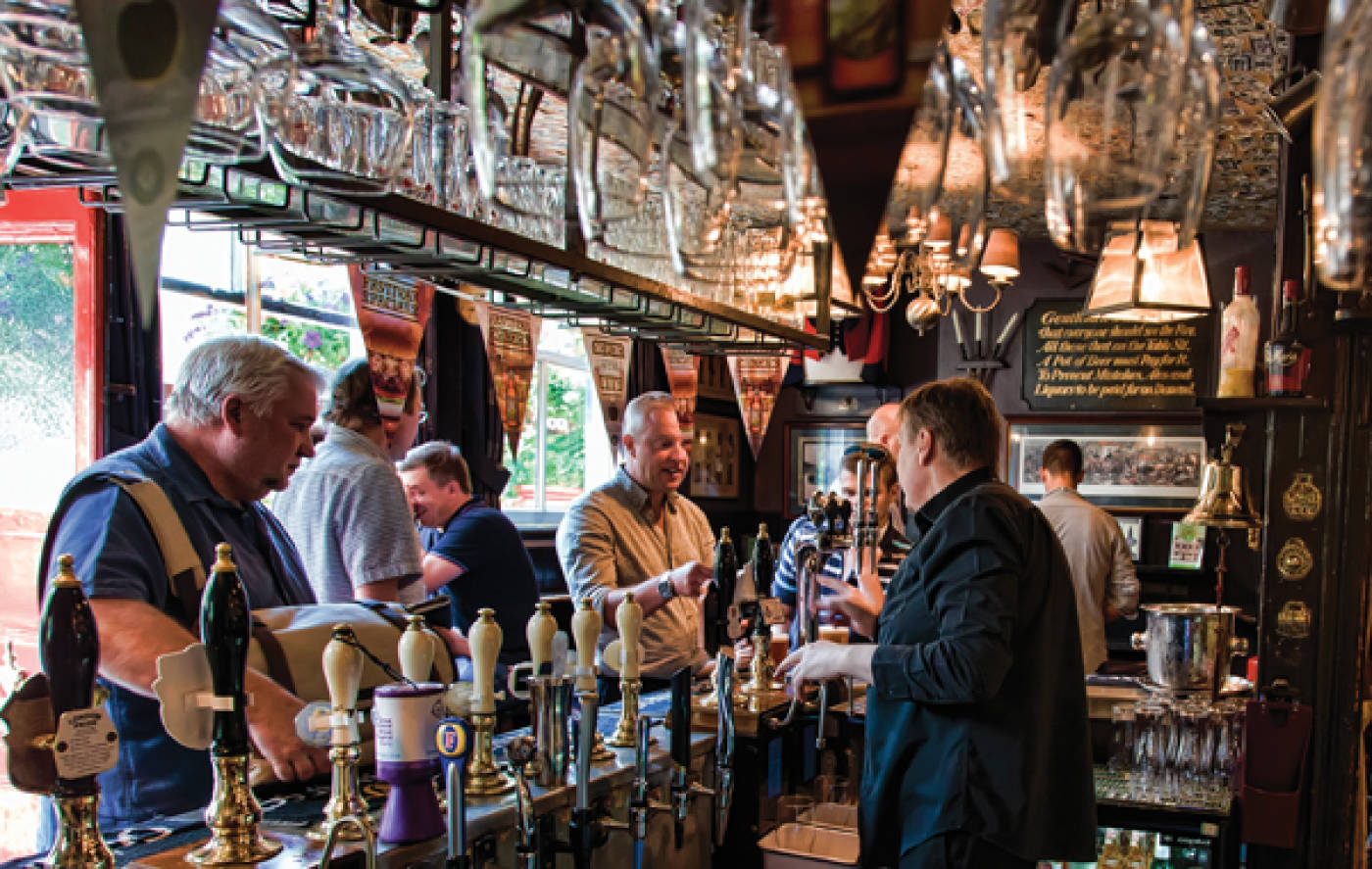 Historical Pub
A great landmark in the area is the Grenadier Pub on Belgrave Square – once an 18th century Officer’s Mess, now considered ​‘royalty’ in the London pubs scene. What’s given this pub its unique character is its ghost – it’s one of the most haunted pubs in the country. In between the military memorabilia adorning the walls are newspaper articles describing its various ghostly goings-on. 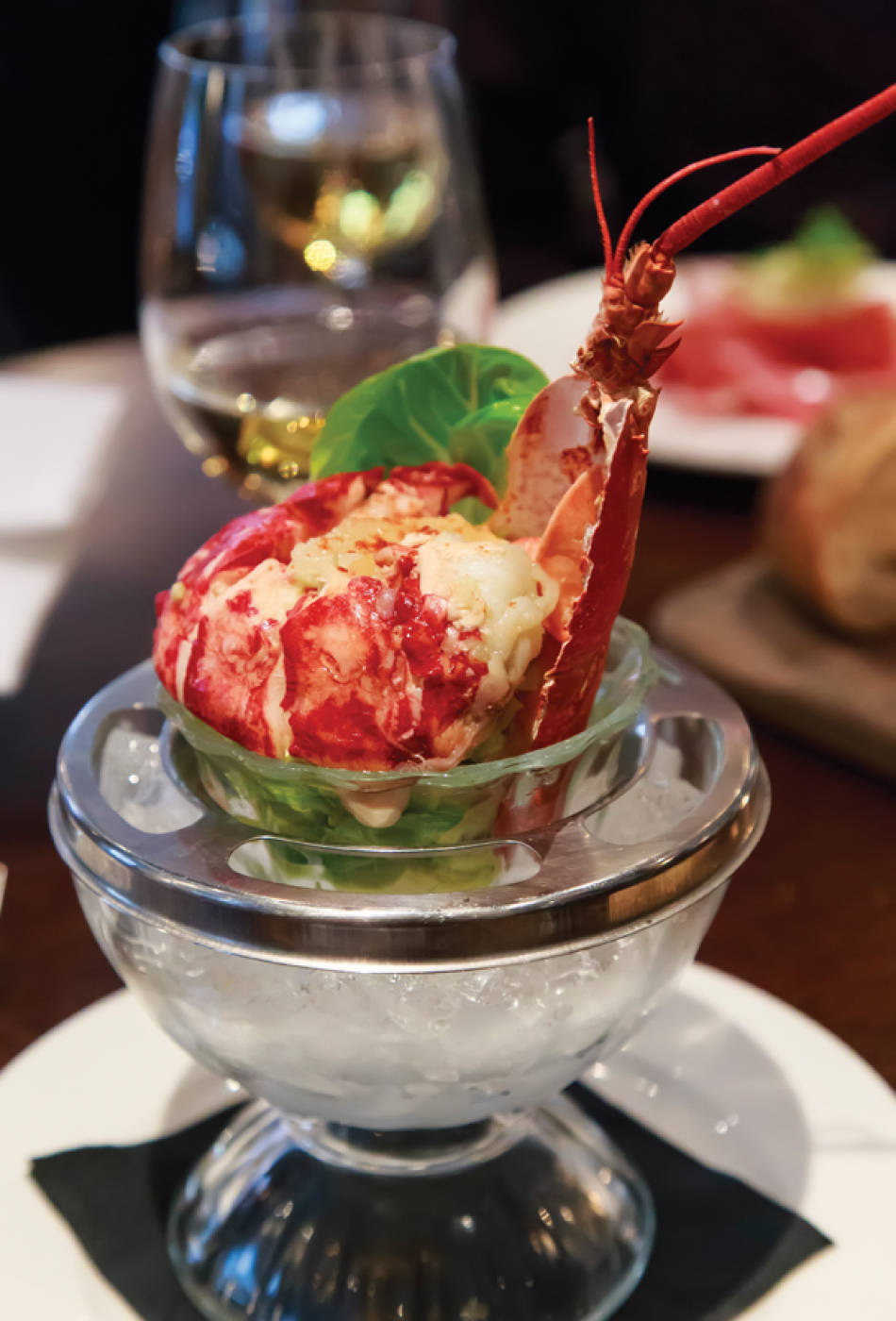 Dinner
The Botanist is perfectly positioned for people watching, be that in the glass encased restaurant or in the bar which, after work, spills out onto the sidewalk. I’m the first to criticize pretentious restaurants but this one I can’t. The atmosphere is great and the food is good, very good – especially so the slightly sweet Iberico ham starter with celeriac remoulade; and the crab linguine main with its rich chilli oil and for dessert roasted figs with honeycomb mascarpone in a pistachio crust. For the princely sum of £37 they’ll definitely be seeing me again. www​.sloanesquare​.the​b​otanist​lon​don​.com