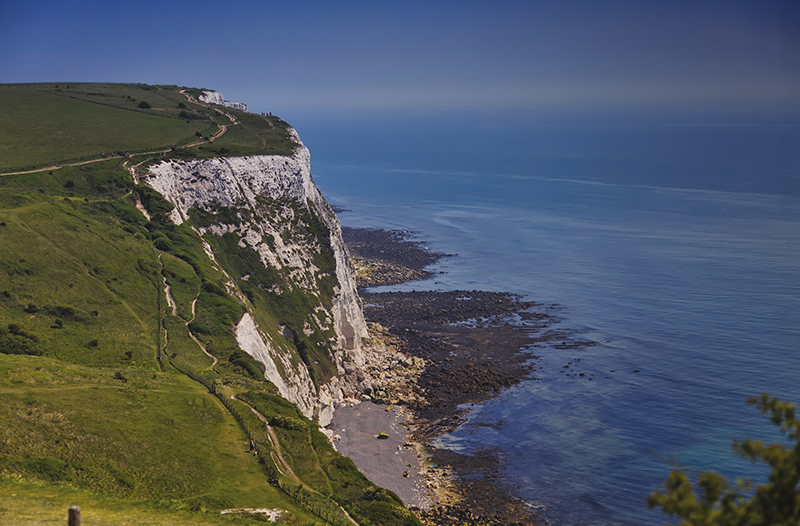 Towering 100-metres over the English Channel, the iconic White Cliffs of Dover are often the first and last view of England for sea-faring travellers. For many the White Cliffs are a clear symbol of Britain in the way the Statue of Liberty defines America. For a few aging natives, the white chalk-face symbolises home and war time defence – even Julius Caesar took a shine to them.

Today, I’m at the White Cliffs of Dover for a serene walk, taking in the spectacular views, a wealth of wildlife, an abundance of history and, more importantly, a tea room promising England’s best cheese scones.

Often steep, the walk may be a little challenging in places, but worth every breathless step. On glorious sunny days, like today, when the cobalt blue sea is mirror smooth, the jaw-dropping views across the English Channel are quite spectacular.

Following a considerable trek, it feels like I’ve not progressed much as all that has changed is the angle of my view. I’m walking along a narrow and rutted track, flanked by rare chalk grassland and an abundance of wildflowers – like the Early Spider Orchid with its yellow-green petals, the Oxtongue Broomrape with its blue snapdragon-like flowers, and Viper’s‑bugloss showing off in vivid purple. All this flora goes to providing the perfect habitat for butterflies, the rarest of which is the vibrantly coloured Adonis Blue. Fluttering just above the vegetation you’ll spot the much paler Chalk Hill Blue; the understated marbled white; and the velvety brown and orange Red Admiral. 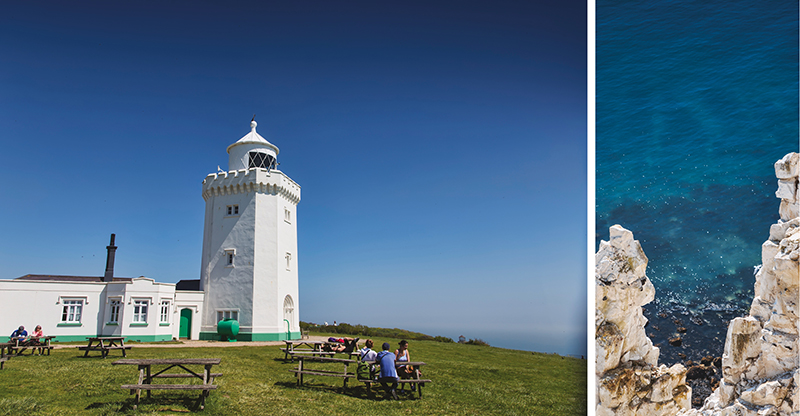 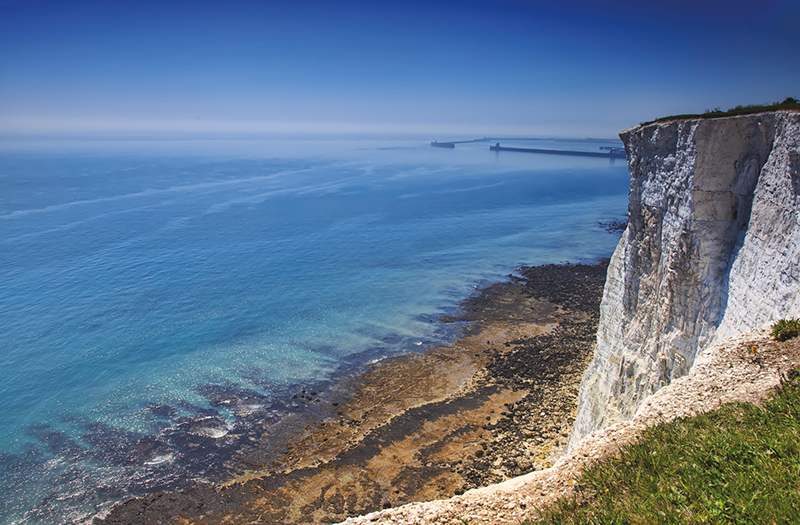 To my right is the expanse of the English Channel, where the sky and ocean merge into France’s shoreline, and to my left National Heritage land – acres of gently rolling hills swathed in calcareous grassland where hardy Exmoor ponies graze. They’re doing their bit for traditional conservation by feeding on the flower-rich, short downland turf. The ponies, which are an ideal breed for the cliff top environment, are managed as a semi-wild herd.

I come to the crest of a hill and in the distance spot South Foreland Lighthouse – the world’s first electric lighthouse, and where Marconi made his first ever international radio transmission. Today it held the promise of a scone at Mrs Knott’s Tearoom.

I pass two small groups of tourists, the only fellow walkers I’ve encountered thus far. Rounding a bushy outcrop, I come upon an elderly man kneeling beside his dog – he’s pouring water into a bowl. We chat for a few minutes.

“On a tranquil winter’s day this here cliff top walk is misty. That’s when Beth and I like to walk.” Hearing her name, the Border Collie looks up at him and dusts the path with her tail. It’s only now I notice the deafening birdsong, so I stand a little closer. ​“Even in the pouring rain, the views are dramatic, with crashing waves over the harbour wall and ferries dancing on the swells.”

He’s a bird man, he tells me, pointing out native bird life who nest on the cliffs. ​“The rarest of all the birds is the peregrine falcon,” he says. ​“They’re the fastest animal on the planet and can reach 200mph in a hunting dive.” He scans the horizon hoping to glimpse the silhouette of one high in the sky. He speaks of ravens, the world’s largest crow, who have returned to breed on the cliffs following an absence of more than 120 years. We spot some jackdaws, who are similar in colouring but much smaller, and several sky larks doing a flight display. Just then a herring gull landed nearby, it’s undercarriage as white as the cliff’s themselves. It settled on a rock overhanging the cliffs edge. 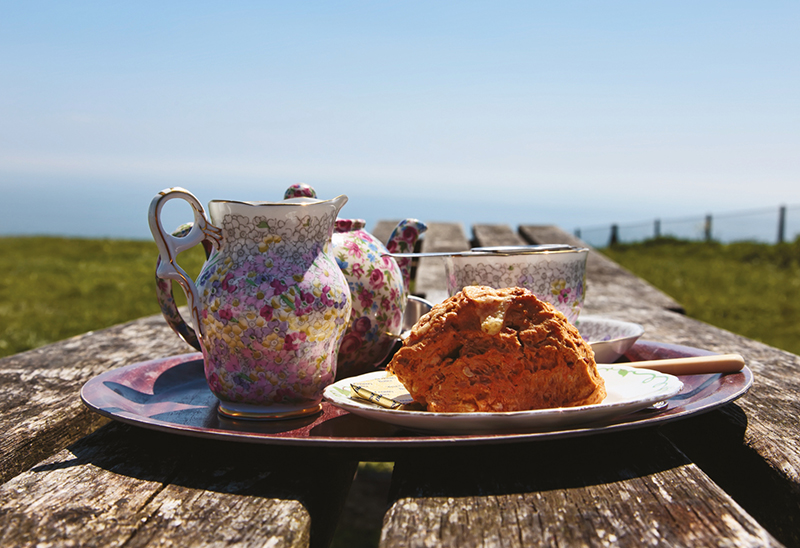 Sitting at a bench outside the South Foreland Lighthouse, I look out across the English Channel, I wonder at the building’s incredible history. This old Victorian gem has witnessed some of the most dramatic moments in English history, including the return of British forces rescued from Dunkirk in WW2.
Izzi, my waitress approaches with a tray laden with tea paraphernalia. She gives me the WW2 back-story to the teapot and the milk jug; the pretty cup and saucer also has a lovely story. All have been donated to Mrs Knott’s tearoom by patrons or family of past patrons.
Just then, as if on cue, a Spitfire does a low and fast flyby – there’s no mistaking the cry of the Merlin engine. I wave with both arms. Now though, it’s time to savour my scone and tea, and think of Queen and country.

Great things to see:
There are a couple of shipwrecks at the base of the cliffs. The first, visible from the viewpoint on the beach in Langdon Hole, displays the steel hull and ribs of SS Falcon, which ran aground in 1926. The other wreck, a German trade vessel, Preußen, can be seen whilst walking across the cliffs, it’s just off the shores of Fan Bay. It was the largest five-mast, full-rigged ship ever built and wrecked in 1910, following a collision with RMS Brighton.

During WW2, the White Cliffs become Britain’s front line and following orders from Winston Churchill, Fan Bay Deep Shelter, an offensive gun battery tunnel complex, was carved into the chalk, 23-metres underground. The battery would ultimately help to close the English Channel to enemy shipping and deter invasion. We’re speaking of cutting-edge technology and weaponry of the time – six-inch long-range guns, radar, plotting rooms and five large chambers providing bomb-proof accommodation, medical facilities plus a large amount of wartime graffiti. The shelter has been restored and is open to visitors.