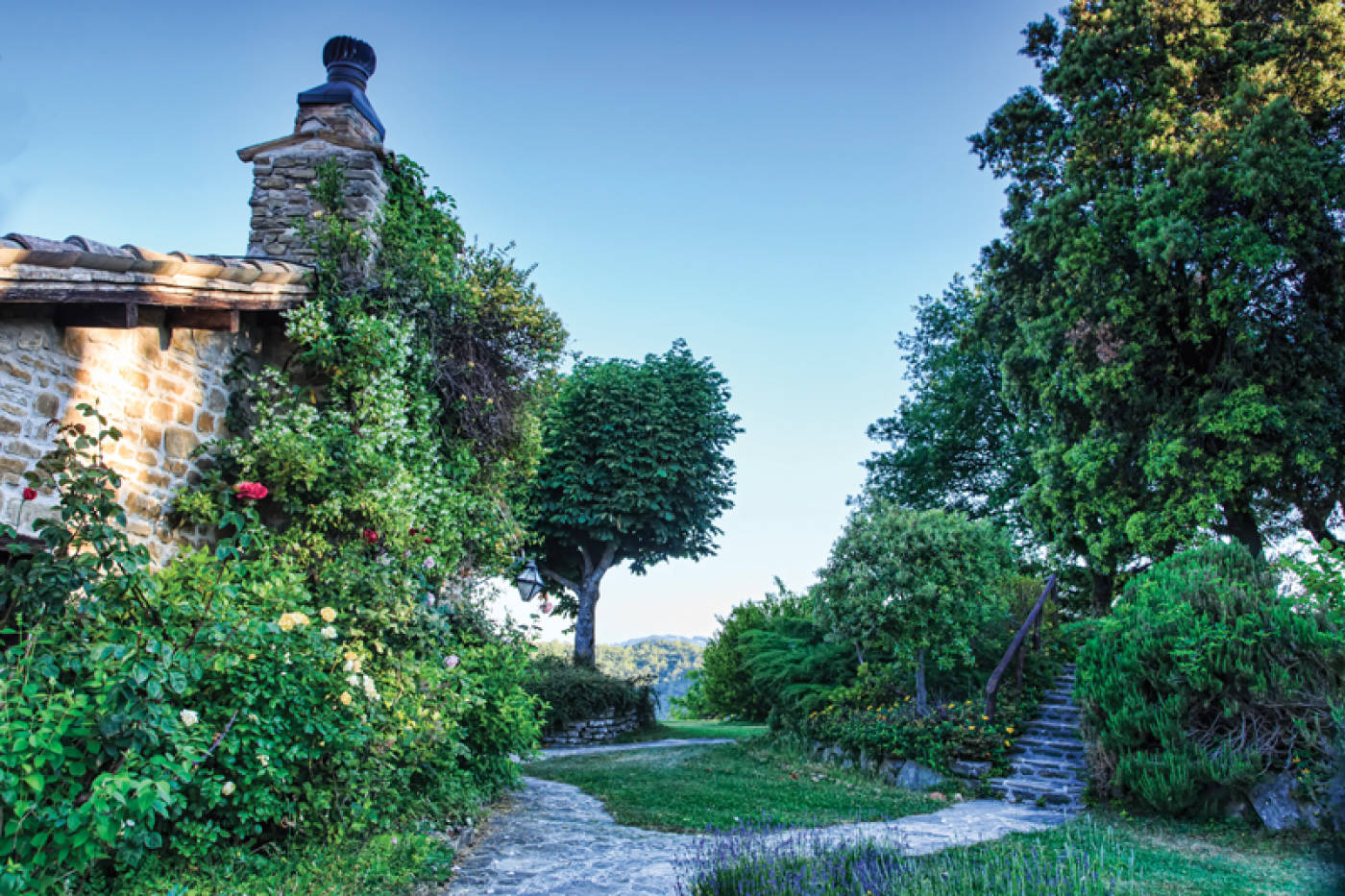 A land of shepherds, wild landscapes and ancient forests

Leave Rome its Pantheon and Venice its canals. Let Tuscany have its art, and hoards of visitors. Where you want to be is camera-shy Umbria – Italy’s authentic slow-food capital. 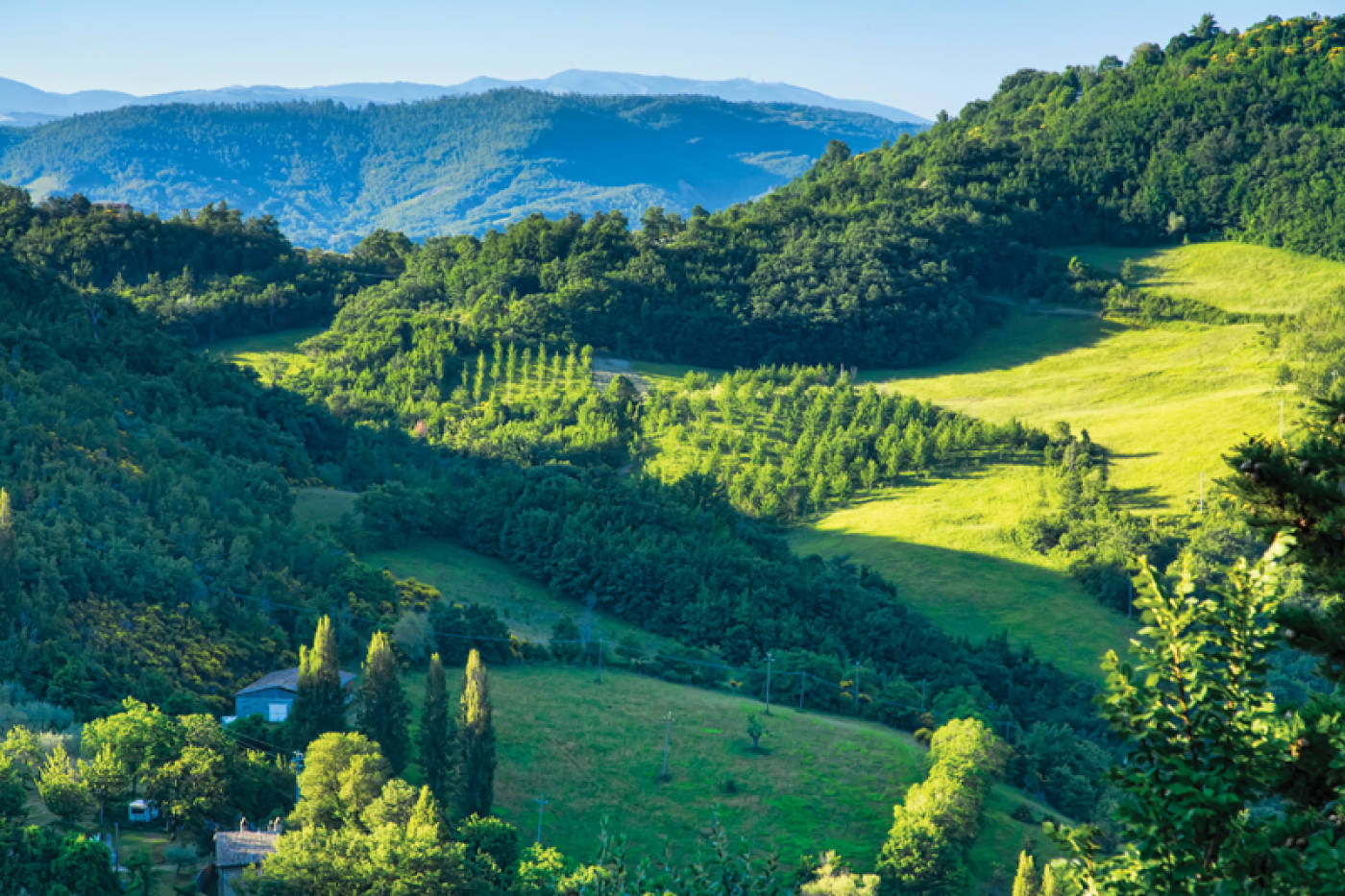 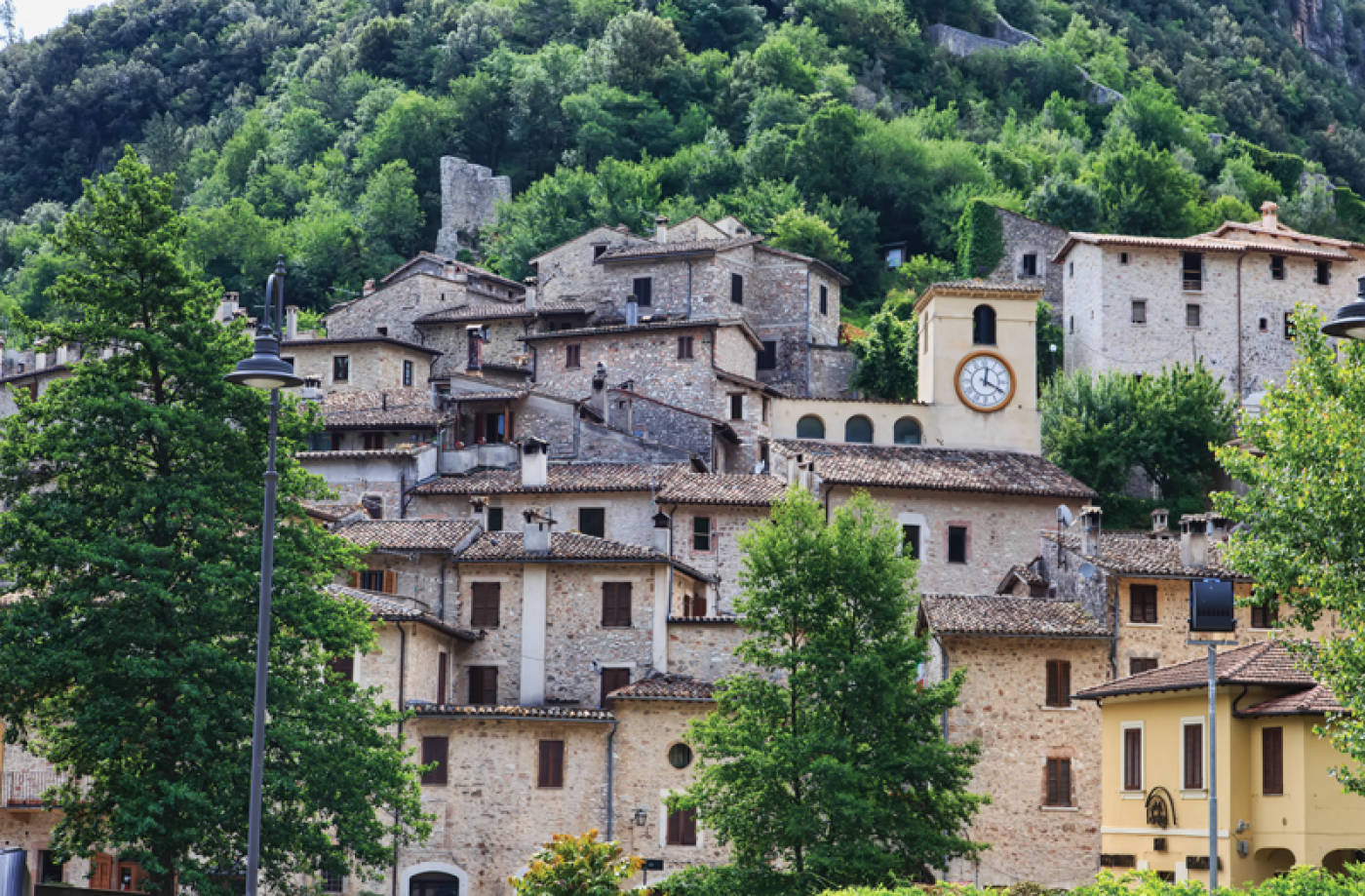 Pastoral rolling hills and broad, sunny valleys dominate its western reaches, with high mountains, gorges and fast-flowing rivers in its eastern margins. It’s one of the country’s most fertile corners, a region of ancient traditions where fine ingredients proliferate.

Castello di Monticelli, near Peruga
In its former life, dating back to the 6th century, Castello di Monticelli has been a fortress, a monastery, a hunting lodge and a prison during both World Wars. Owners Ellen Krauser and Prof Giuseppe Tullio bought the estate in 1992 and spent 18 years restoring it, preserving the medieval characteristics in each of its 26 suites – fireplaces, terra-cotta floors, oak ceiling beams (many original), chestnut windows which frame views of the valley and Perugia in the distance. It’s surrounded by two acres of gardens and terraces, six acres of forest, and a large patch of land where organic produce is grown. 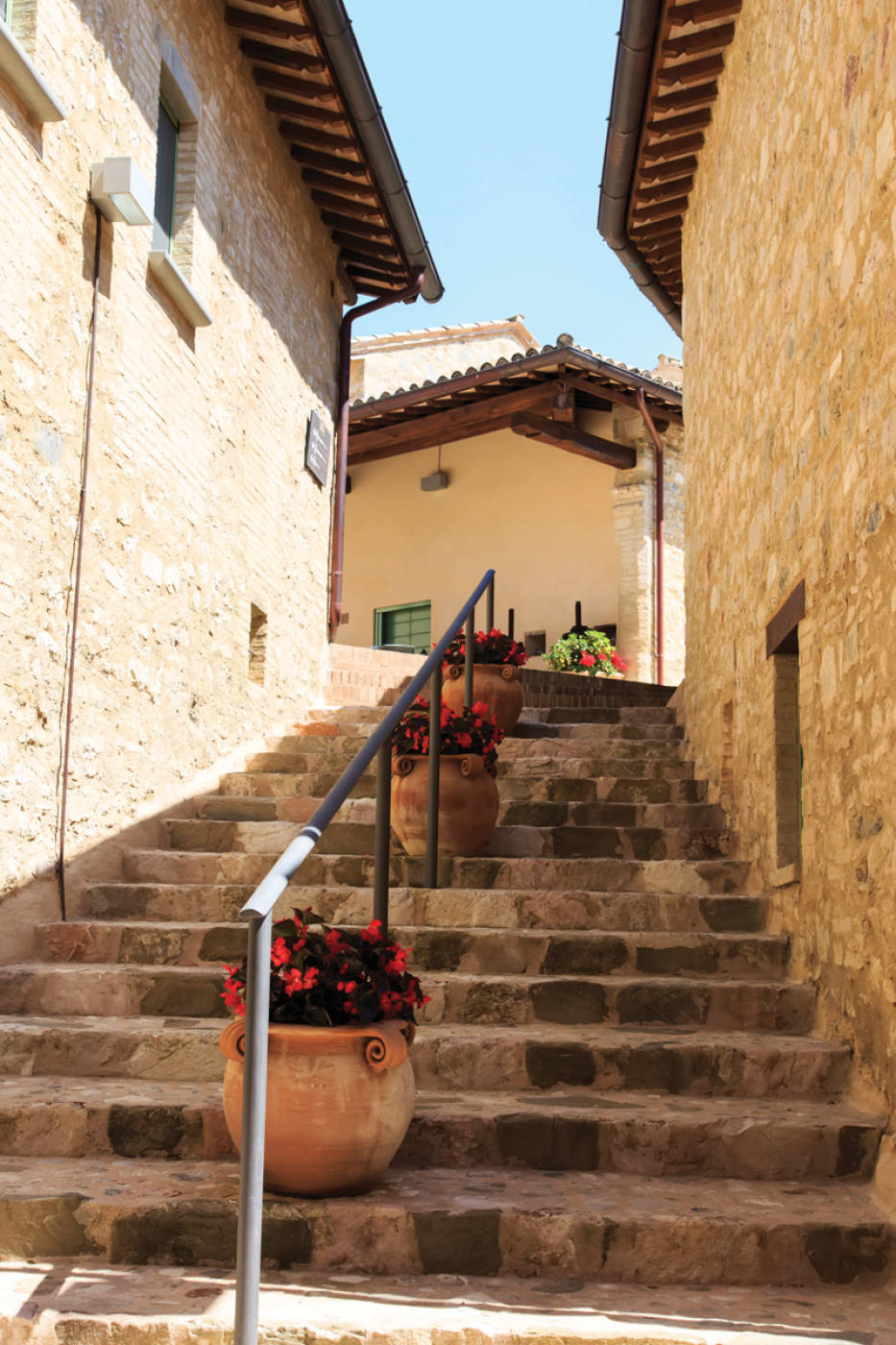 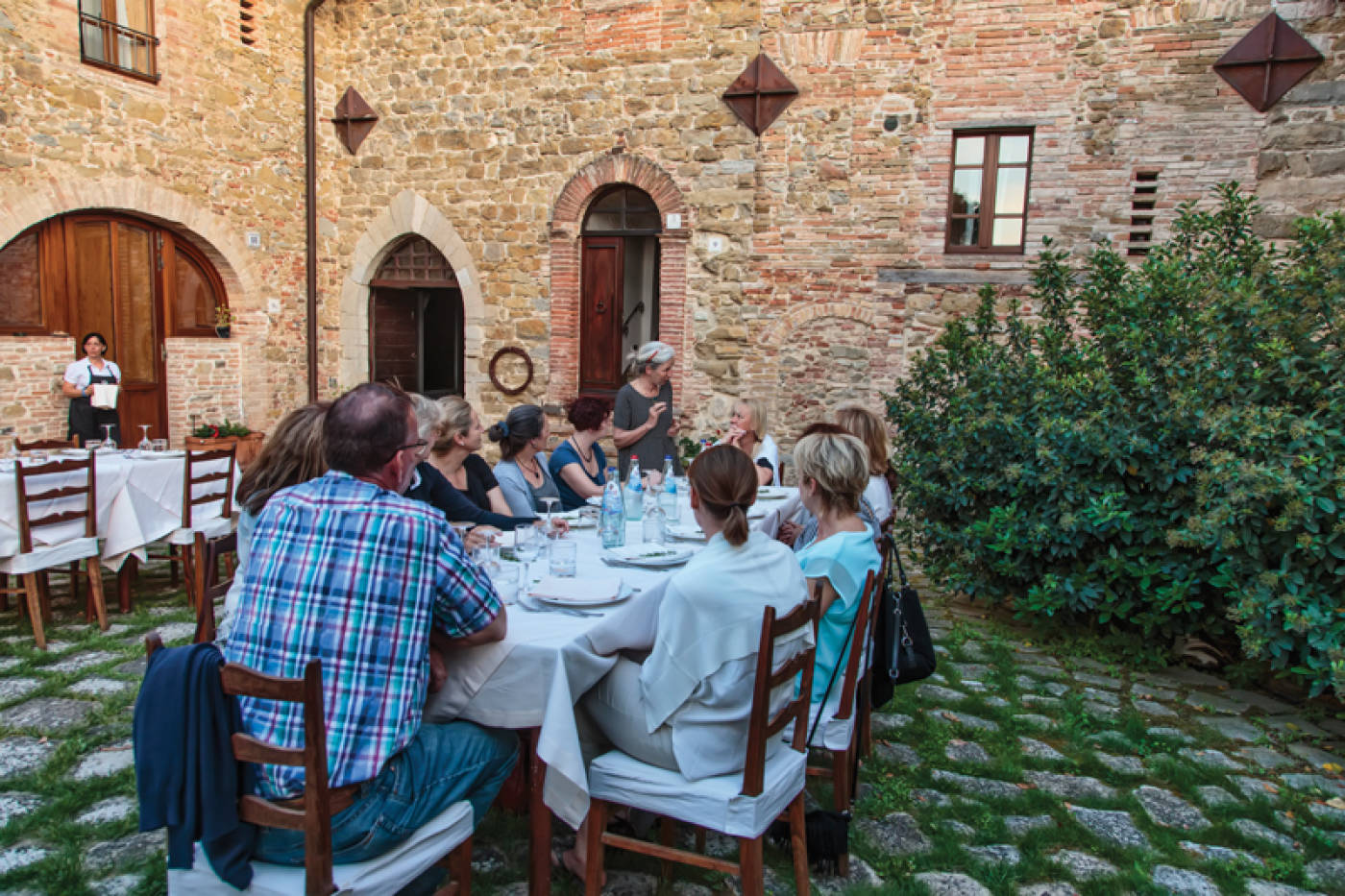 Majolica Ceramics, Deruta
In the hill town of Deruta I visit the world’s oldest ceramic factory, Grazia Maioliche Ceramics. Although official records show majolica being manufactured in Deruta during the second half of the 13th century, evidence suggests that it actually began a century earlier.

I’m speaking with Dr Ubaldo Grazia of his family’s history in ceramics: ​“In the early 1500s Giuseppe Grazia moved his factory to Deruta and with this found a succession of master painters whose creations where highly sought after. In 1921 my father moved the factory to where it now stands,” says Ubaldo. ​“Nothing has changed since then and the craft remains what it’s been since the 12th century, handed down from father to son uninterrupted.”

Beyond the conscious commitment to keeping this ancient art alive, the present Grazia generation pursue a vigorous policy of innovation in their ceramic classes, workshops, museum and factory.
www​.ubal​do​grazia​.com

Lungarotti Winery, Torgiano
Umbria’s mild climate makes it particularly suitable for wine growing, and produces top-quality white and red wines, including those found on the Lungarotti Estate, first planted by Giorgio Lungarotti in 1962. A cellar tour demonstrates a state-of-the-art vinification process, and culminates with a tasting of some of the best Italian wines I’ve yet sampled.

“We have two estates,” says CEO, Chiara Lungarotti, ​“570 acres in Montefalco and 50 acres here in Torgiano. Together they produce 2.5‑million bottles a year, exported mostly to Germany, the USA and Canada.”

Chiara treats to me to lunch at L’U Winebar where understated gourmet cuisine is standard. We share a bottle of Rubesco, over beef carpaccio with red beet mayo, then finish with Tozzetti almond biscuits and a small glass of Lungarotti vin Santo. Later I take a wander around the facinating Wine Museum, created by Chiara’s mother, Maria Grazia.
www​.lun​garot​ti​.it

“Craft beers are unpasteurised, unfiltered, without preservatives or additives,” says Antonio. ​“These beers speak of the relationship between the most natural of raw materials, Umbrian speing water, coupled to the skill and know-how of the brewer.”

Of their eight beers, the four most unique are Chocolate Porter: a full bodied, deep-brown beer with delicious hints of cocoa; L’Isterica: a perfect combination of a continental beer and an English ale with just enough gas to lift it; Insolita: an authentic Italian grape ale that’s rich in personality; and their flagship Fabbrica Birra Peruga, which is smooth, fruity and long, with a bitter finish.

“We ferment some of beers in Lungorotti wine vats,” Antonio states. ​“They’re then bottled in ceramic flagons from Deruta.”
www​.bir​rape​ru​gia​.it

Hotel Le Silve, near Assisi
At the end of a winding mountain road with 700m-high vistas across wooded hills, is Hotel Le Silve di Armenzano. It has grown from the ruins of a 10th century mountain inn, making the most of its sublime setting. The central hotel, outlying buildings, 19 air-conditioned double rooms and 13 mini-apartments, retain their medieval features with rough-hewn stone walls and terra-cotta floors. Aside the myriad of outdoor activities, the big draw is their restaurant with superb views and an extra-ordinary menu, bursting with Umbrian tradition and supplies from their organic farm. Their Tortelli pasta stuffed with ricotta and thyme, dressed with asparagus and truffle shavings, is out of this world.
www​.lesilve​.it 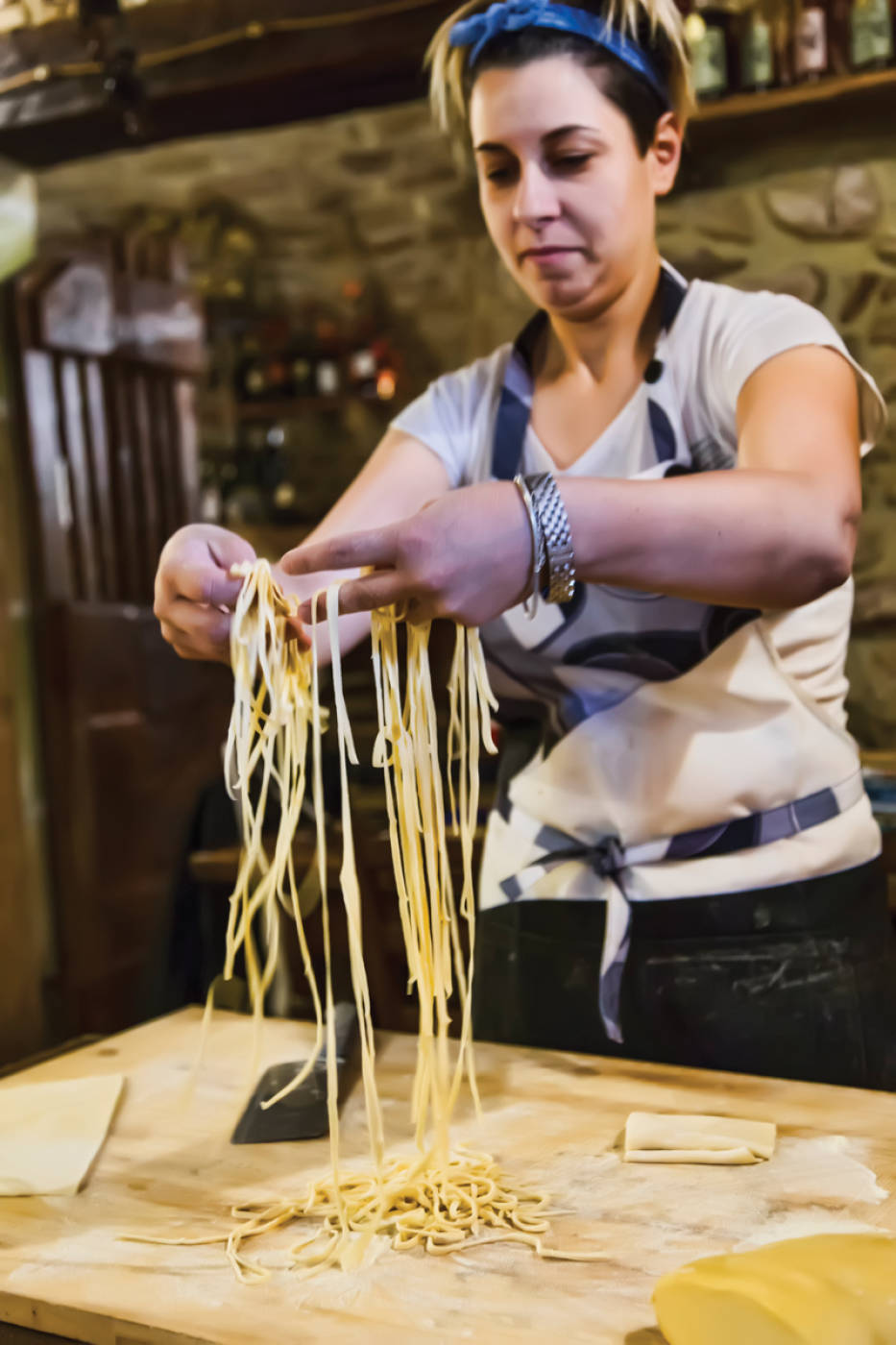 The best pasta restaurant in Europe
Scheggino is one of those picture-postcard hill villages where time and space have stopped. A flight of narrow stone steps delivers me to Osteria Baciafemmine and a demonstration in pasta making.

“Our typical pasta is umbrici, made from flour and water,” says Elisa Valentini, whislt slapping around a ball of pasta.

“After kneading the dough, it is rolled out like this, then hand-cut into a cord-like spaghetti strips. The ideal condiment for umbricelli is truffles.” And as if by magic a plate of it appears before me.
www​.oste​ri​aba​ci​afem​mine​.it

Food producers, Norcia
Founded 600 years before Rome, Norcia is filled with tales of magicians and chiromancers who bewitched the caves and forests. It’s also a town that has, over the centuries, been damaged by frequent earthquakes – the most recent in 2016. 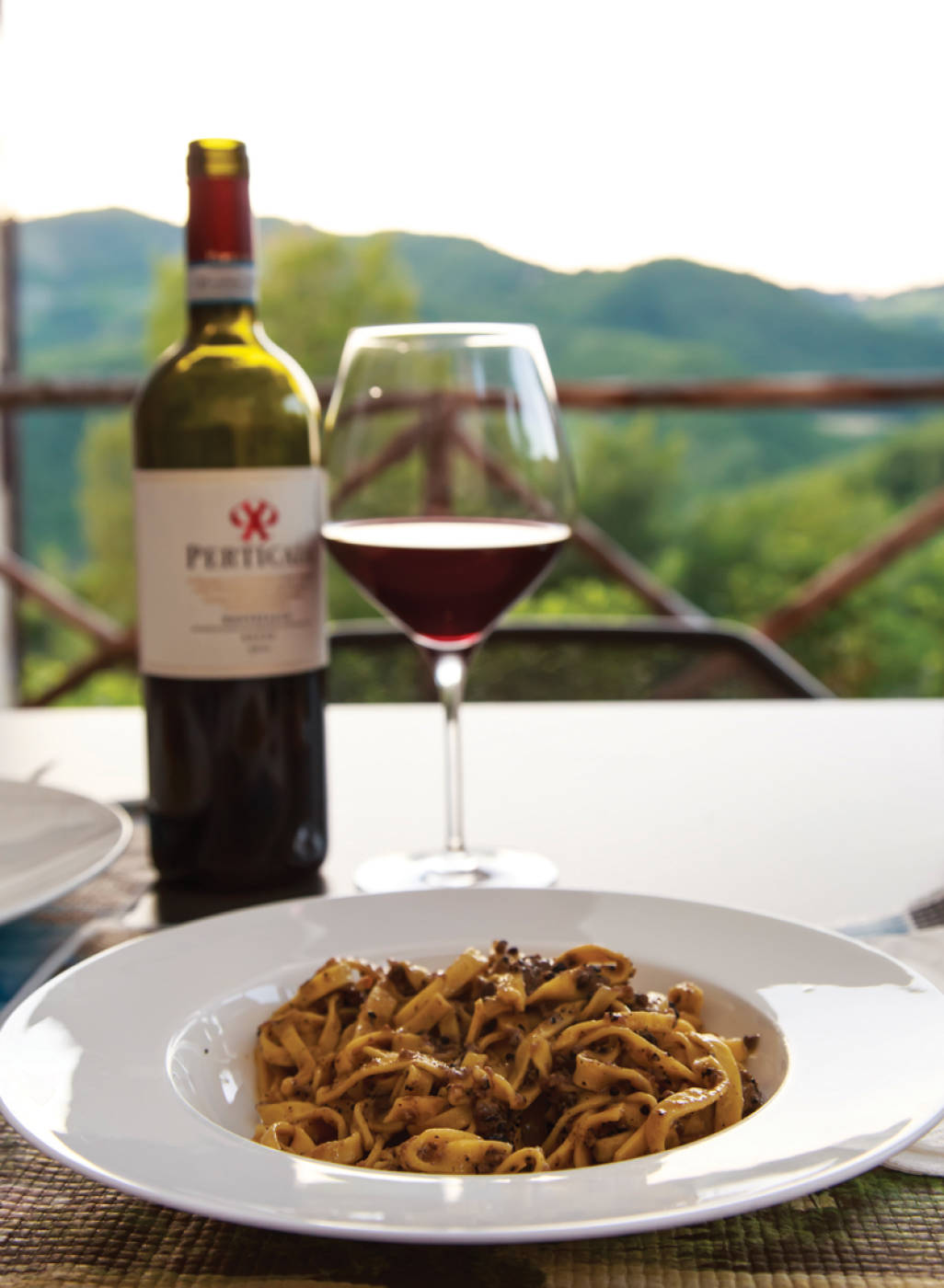 The old town, with many ancient buildings lying in ruins, is all but cordoned off, some areas inaccessible. I eventually found Catia Ulivucci, a 30+ year old Norcia farmer and owner of the famed cured meat shop ​‘Norcineria Ercole Ulivucci’. She lost her farmhouse and her ​‘old town’ shop in the 2016 earthquake. She and her husband Claudio Funari now run their business from a temporary stand in a car park which they attend twice a week. Ten years is what she recons it will take to reinstate their business and her home. For now, she smiles. 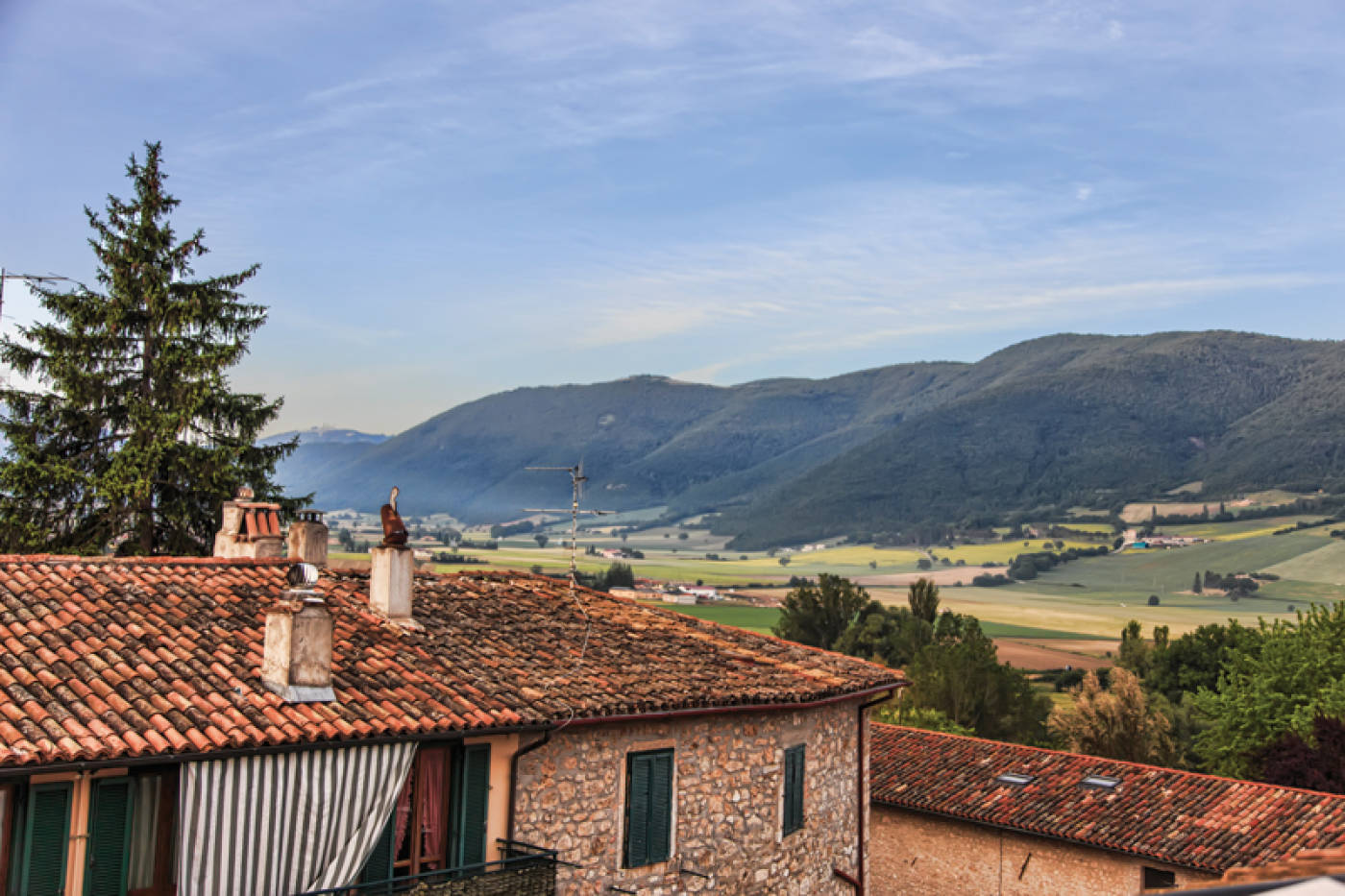 “There’s little more I can do,” she says, ​“there are no more tears to cry.” But of course she is one of Umbria’s super-farmers. She cultivates her fields and she gets her hands dirty, her aim is to develop innovative eco-tourist projects like a cooking school.

We speak about her meats and she introduces me to her herd of Apennine sheep, telling me of her seasonal favourite cheese – Giuncata, which is curdled slowly in baskets made of rush, then eaten with sugar and cinnamon. But the one to look out for is the caciotta ai tartufo, flavoured with black truffles.
ven​di​ta​.norcine​r​i​aulivuc​ci​.it/​n​e​gozio

“Our most popular sausage is Corallina di Norcia,” says butcher, Mario Salvatori. ​“It’s seasoned with pepper and garlic then macerated in wine, then left to rest in an airy room, heated by log-fire and smoked using charcoalled juniper berries.
www​.norcine​r​i​adi​nor​cia​.it

Castello di Gallano, Valtopina
The castle, once a fortified Benedictine monastery dating back to 1085, was left abandoned for near 40 years then privately acquired in 2008. A five-year, €15‑m renovation project delivered 32 two-bedroom, self contained apartments, two swimming pools, a grocery shop and two chapels.

In the central part of this UNESCO World Heritage Site is an restaurant where guests and locals come together to savour traditional Umbrian cuisine. All the ingredients are local, almost zero miles travelled.

A bottle of Montefalco Rosso and a plate of lamb ​‘cooked-two-ways’ is put before me – one fried in herby bread crumbs, the other grilled with herby salt, followed by Tagliolini with shavings of black truffle. Everything is drizzled with locally produced golden olive oil , which enhances any dish without upstaging the flavor.

In hues of blue and lavender, I stood at the precipice of Castello di Gallano watching Umbrian farmers in the act of creating food, tilling the warm-smelling soil with hoes. The branches around me hung heavy with birds who sought a suitable vantage point from which to sing out the sunset.
www​.castel​lodi​gal​lano​.com