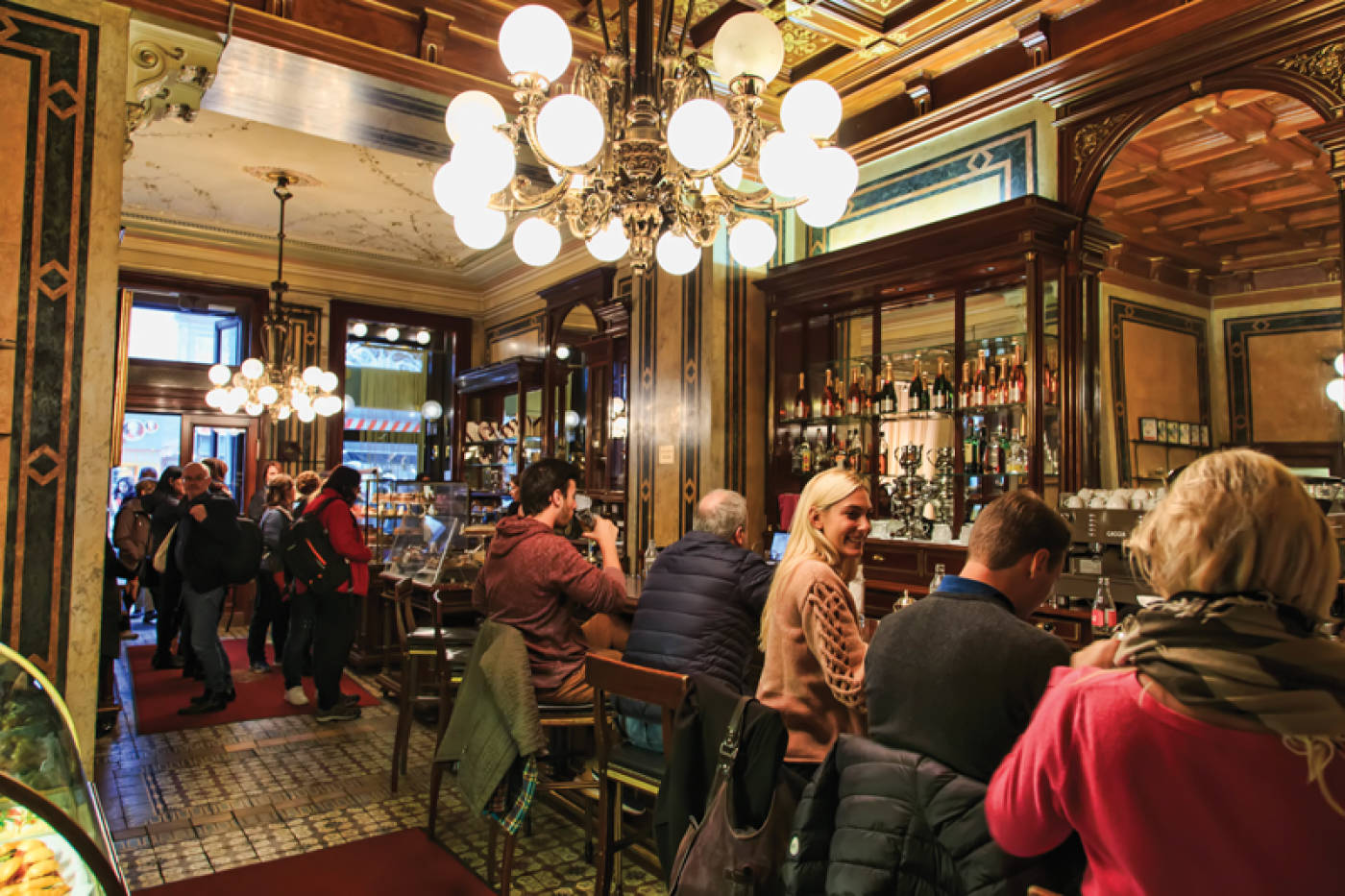 A new law enacted in 2015 stipulates that Vienna’s vineyards must continue to be used for winegrowing, which would prevent valuable regions from falling prey to real estate development. So, quite literally, it’s a legal requirement to make wine – which is not a bad thing as Vienna has wine in its DNA; it’s been cultivating vineyards within the city limits for more than 2,000 years. Evidence of viticulture, dating back to 500BC, has been found in Vienna’s wine villages, on either side of the River Danube.

The regions growers are increasingly migrating to organic wine production, creating a niche product. It’s changing the efforts of people like Hans Peter Göbel of Weingut Göbel who have greatly contributed to the frisson on the capital’s wine scene, earning organic certification along the way. Hans Peter shows me around his cellar, and speaks of his family, inheriting the farm whilst studying architecture, his commitment to organic production and his gentle vitification process. He produces the region’s typical white wine, but also several award-winning red wines. Sitting on the terrace under lush low-hanging vines, I ask after his preference for red wine production. ​“There is more time for red wine to think, gather its thoughts. Red wine will not be rushed. When making white wine the timing need to be exact, getting it a couple of days wrong on either side of set calendar dates for harvesting or fermentation, could be disastrous.” Directly beside his vineyard is Hans Peter’s trendy heuriger (wine tavern serving warm meals), complete with a Viennese gourmet menu. His mineral-rich 2016 Riesling will blow you away! www​.wein​bau​goebel​.at 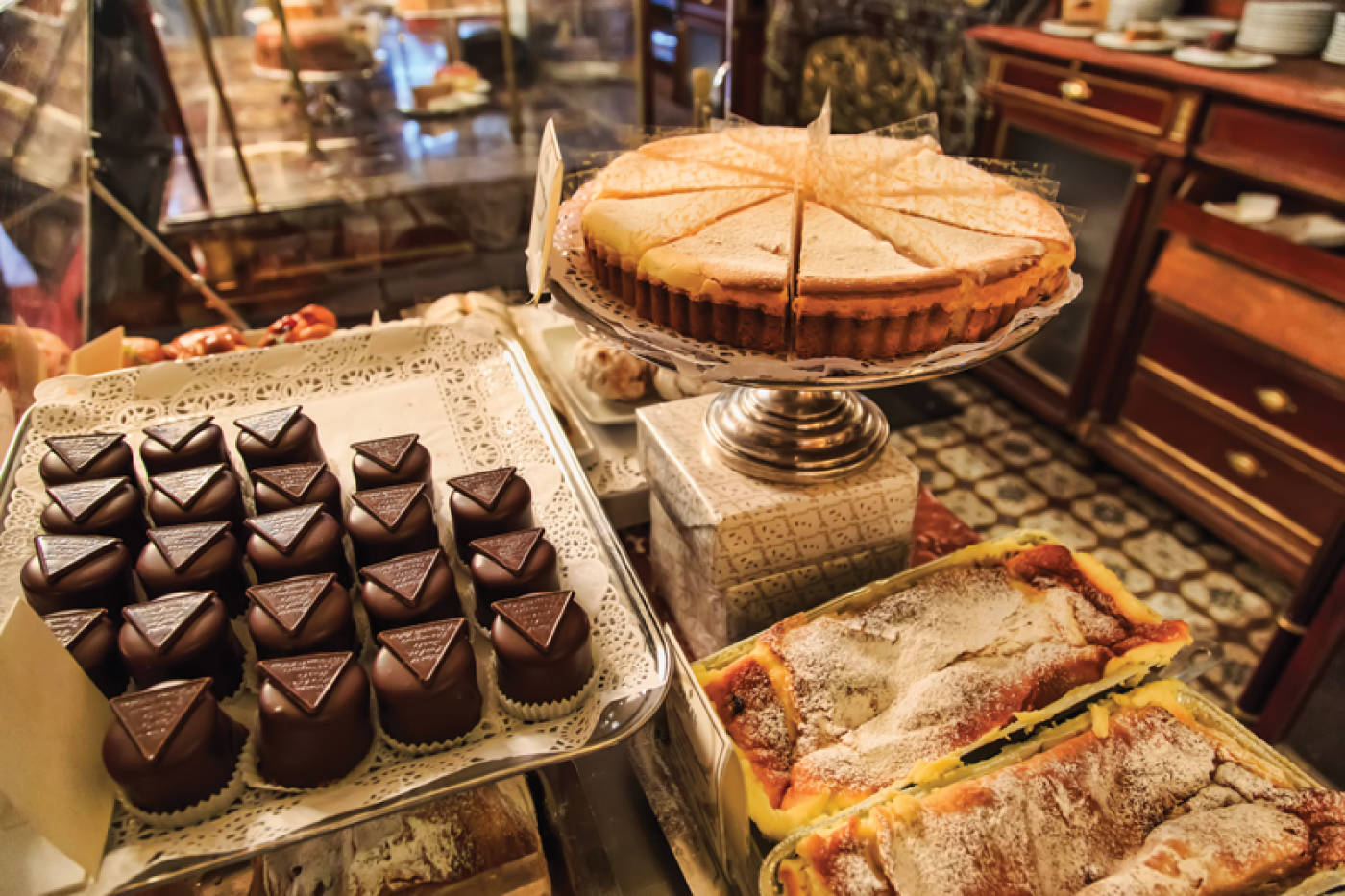 You could wine-taste your way to the bottom of Stammersdorf quaint Kellergasse – the longest wine-cellar road in Vienna. The cellars don’t look much from the outside, but in nearly each one you’re served by the owner. It’s very much a family affair.

On a hilltop, tucked between the vineyards, is Wieninger am Nussberg, famed for its panoramic city views. Their informal buschenschank (an outdoors version of a heuriger, but serving only cold food) is little more than a few benches and tables thrown together; off to one side is a wooden hut serving wine and platters of cold meats, cheese and farm bread. It’s heaving with hikers and locals looking for a tall glass of sturm – a young, sweet wine that’s not become a wine yet, but tastes and smells of autumn. Sadly, it’s only around for six weeks of the year. www​.wieninger​-am​-nuss​berg​.at

A short walk down the hill is the equally rustic buschenschank of Mayer am Nussberg. Their 61-hectare vineyard opened their first wine tavern in 1683 after the Turkish Siege. They also own a wine tavern in the old village of Heiligenstadt (City of Saints), where Beethoven once lived and worked on his greatest creation – the 9th Symphony.
www​.may​er​am​nuss​berg​.at

Vienna’s wine-growing region, at the edge of the Vienna Wood, totals around 700-hectares and produces 2.4 million litres annually. Around eighty percent of the hills are covered with white wine vines, producing Riesling, Weissburgunder, Grüner Veltliner, Sauvignon Blanc and Gelber Muskateller wines. The balance are red grapes, generating Merlot, Pinot Noir and Syrah varietals. One specialty among Viennese wines is the field blend of ​‘Wiener Gemischter Satz’ where different varieties of grapes are mixed and vinified together. 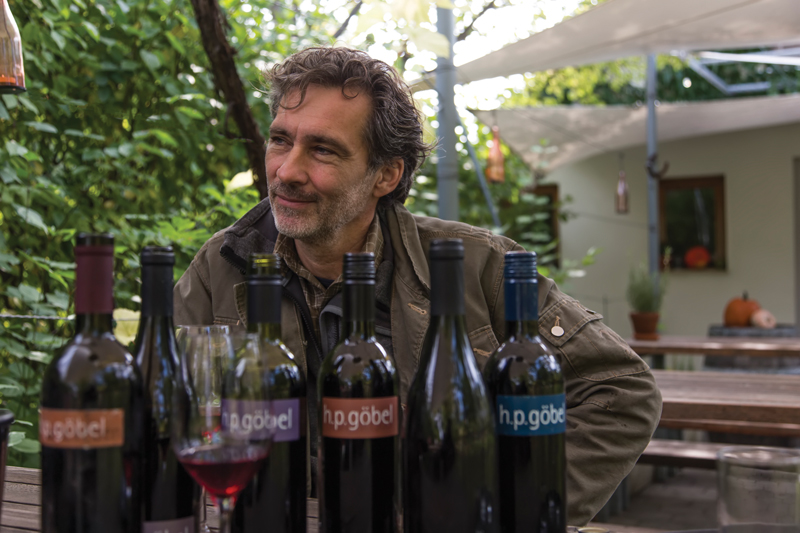 At the foot of the Nussberg Hill is the wine village of Grinzing, and it’s ​‘Buschenschank in Residence’ – Jutta Ambrositsch, who grows and produces her wines just a few hundred metres away. Jutta’s buschenschank is traditional in every respect, with excellent wine and local cheeses. Everyone should get to know her blue buffalo cheese. www​.jut​ta​-ambrositsch​.at

At the ancient Mayer am Pfarrplatz heuriger, in Heiligenstadt, character and history ooze through the stone walls. Dine on wild board sausages with pumpkin cream, Sauerkraut and bread dumplings, and savour a glass or two of Grüner Veltliner whilst listening to a musician painstakingly squeezing melancholic tunes from his concertina, commemorating the great composer who once lived in the room above. www​.pfar​rplatz​.at 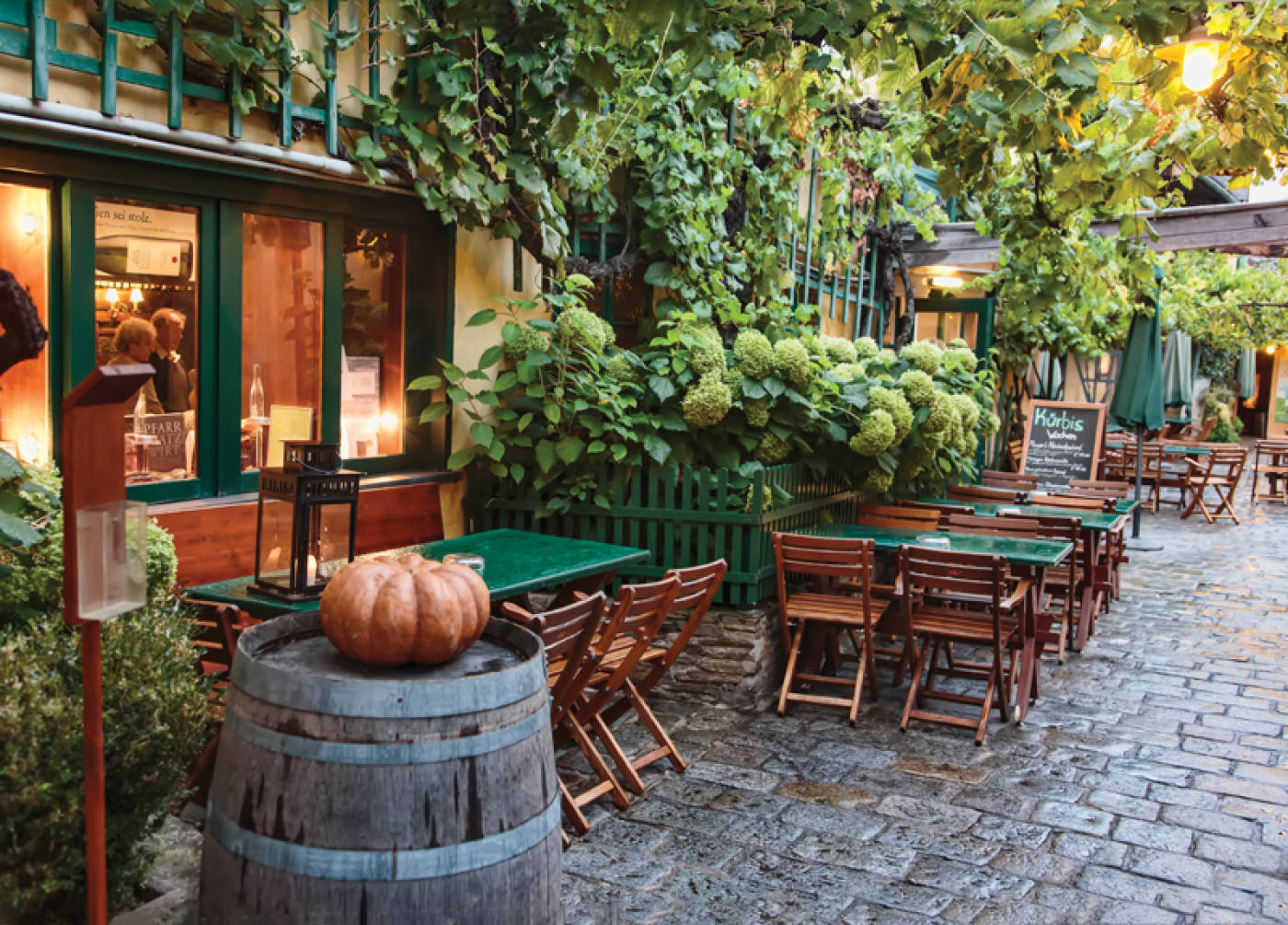 The 1794 law governing heuriger’s (wine taverns) allows wine growers to serve wine produced exclusively on their vineyard. Traditional heurigers are open for only three weeks during the Autumn harvest, though many reopen later in the year when more wine has been produced. They also serve traditional Viennese cuisine. To find a serving heuriger look for the fir branch hanging above the entrance.

A buschenschank is like a heuriger, but more rustic, and serve only cold foods – platters of cured meats, cheeses and farm bread.

At Weingut Christ the production process (architecturally designed to enhance gravity), is a modern, cutting-edge, wine cellar and ​‘vinothek’, with exposed stone, glass, concrete and wood. In contrast its heuriger is traditional with cosy niches and massive wooden tables under an abundance of vines. The disparity is appealing, as are the 25-hectares of organically cultivated vineyards – small parcels of land, each with its own microclimate, found on the gently sloping south-facing Basmberg Hill, which annually produce some 120,000 bottles of Austria’s best wines. Pioneering wine maker, Rainer Christ, speaks of his gravity fed, unfiltered biodynamic wines, of harvesting and vinification according to the phases of the moon. He speaks too of Weingut Christ’s history, of it being a family business for 16 generations and how, in 1927, his grandfather started a heuriger from his kitchen table and opened for just two weeks in Spring and two in Autumn. ​“Wine is romantic, it needs pleasure and passion,” says Rainer. ​“To create wine there must be a yearning to invent something exceptional.” Tasting his Wiener Gemischter Satz you may well conclude this has already been achieved. www​.weingut​-christ​.at 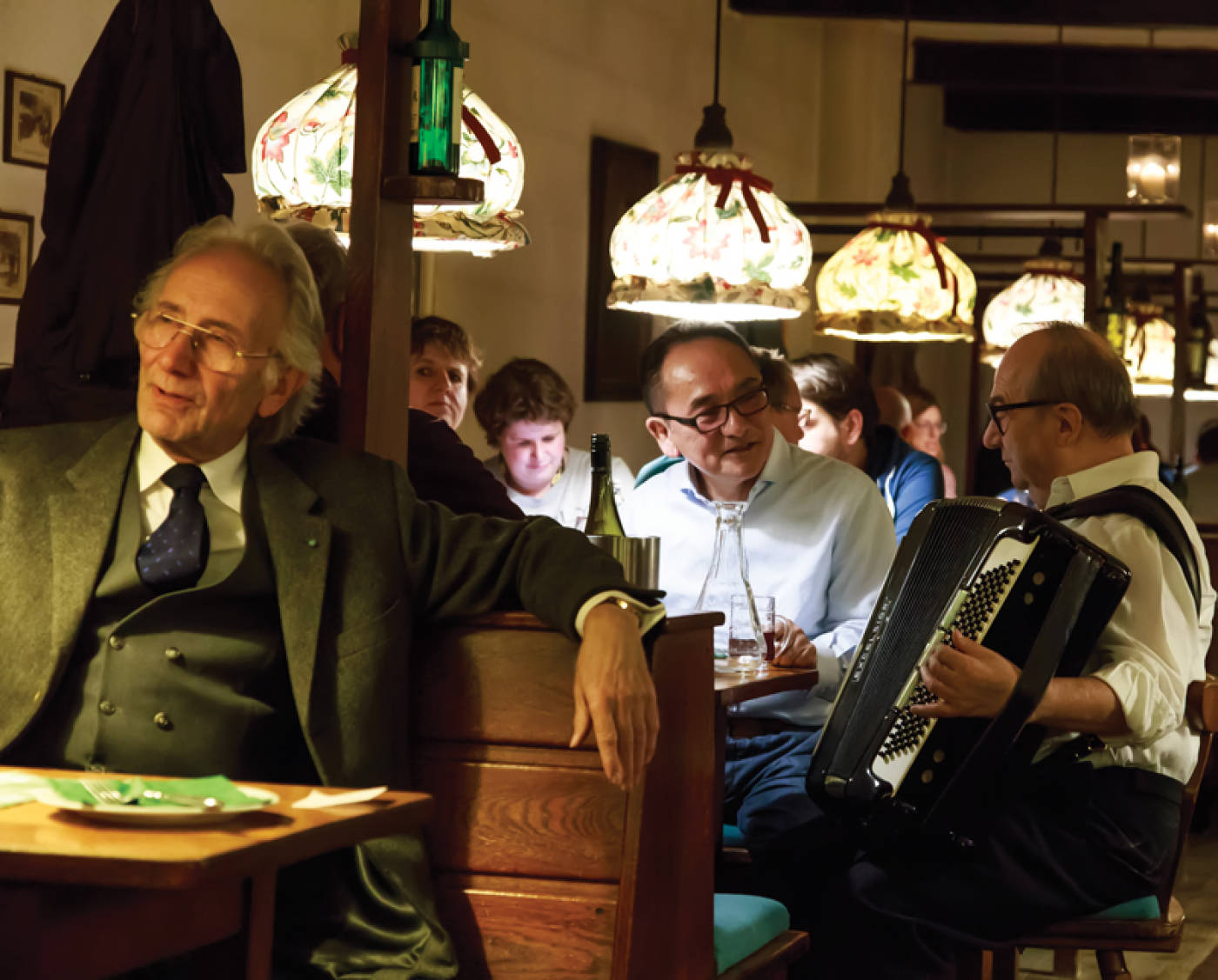 It’s quite remarkable to think that this world-class city can have you partake in its wine-route without the need to leave the city limits, and it’s all accessible via trams or short taxi journeys.

Eat Vienna
Lunch – You can find sausage stands all over Vienna, mostly small sidewalk kiosks, selling not only hot dogs but also wieners, fried sausage and Käsekrainer (a lightly smoked pork sausage with bits of melting cheese inside, best enjoyed with mustard, pickles and rye bread). The question you’ll be asked is whether you want your mustard sweet or spicy.

The Bitzinger Würstelstand, a true institution on Albertinaplatz, is the most famous sausage stand in Vienna that looks more like a fine dining establishment than a simple street vendor. This is where fur coats and denim jeans meet, bus drivers and Museum Directors, night owls and opera-goers. Other than good würst (and unlike other Würstelstände), Bitzinger also has beer on tap and serves champaigne. www​.blitzinger​.wien​.at 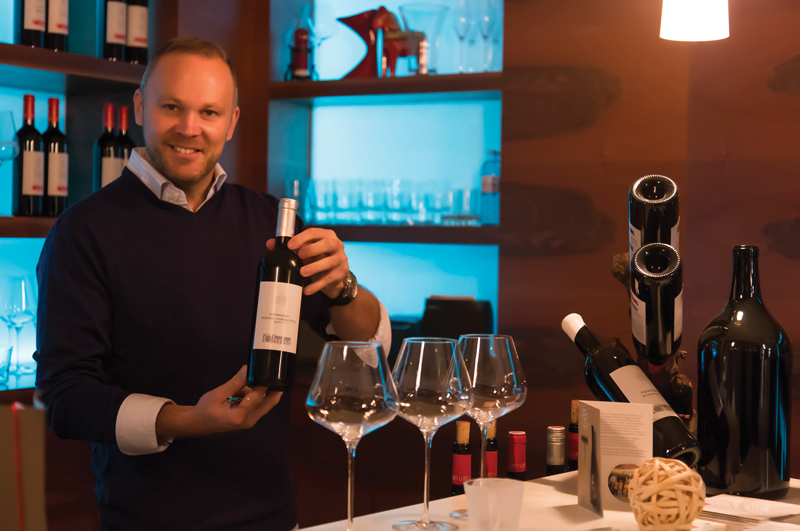 Dinner
Lingenhel is an urban food concept and one of Vienna’s gastro newcomers. Johannes Lingenhel, seasoned in the cheese and deli trade, knows exactly what he wants. With the aid of a local Syrian sheep farmer and a native Water Buffalo herd, his city deli-dairy model come into fruition in June 2016.

Lingenhel is an uncomplicated deli, bar and restaurant. The minimalist-feel eatery, with its wooden tables and chairs and meshed-wire chandeliers, is under the guidance of chef Daniel Hoffmeister. The fine dining facility, located in the former stables, contrasts with the cheese dairy’s industrial feel and is where, through a glass wall, guests can watch the cheese production process.

A small trestle table, loaded with oozing cheeses, is set up beside a dinner party of twelve. Johannes introduces each cheese to the guests, speaking of its origins and what the free-range animals feed on. His audience is captivated, leaning in to catch every word. They’re all eager to try the log shaped kick-in-the-pants St Maure de Tourraine goats cheese he’s describing.

“Key to it all is good animal husbandry,” says the cheese wizard himself. ​“A happy animal produces good milk. And you can taste it, which is why my customers are smiling when they see what I bring from the ripening cellars – the most silken of goat’s milk cheese, rich mozzarella made from Buffalo milk, and creamy sheep’s milk camembert. Fresher cheese cannot be found in Vienna.” www​.lin​gen​hel​.com

Dessert
You can try to replicate a Viennese coffee house in other cities, but it’s simply not possible. Vienna and coffee are inseparable. It’s a custom. The function of a coffee house, other than the drinking of coffee, is merely an extension of refinement, where people can read, write, reflect and ponder life. And eat the ultimate chocolate cake.

Seeking advice as to which cake to order, my waitress at Demel passes on a little history.

“In 1832, Franz Sacher created the first ever Sacher Torte. Many years later, his son Eduard recreated his father’s Sacher Torte recipe which immediately won favour in high circles. Eduard went on to become a successful chef and confectioner, working at Demel – a Viennese pastry shop and chocolatier, which bears the title of a Purveyor to the Imperial and Royal Court. Later his son, Eduard Jr., opened a café and still later a hotel behind Vienna’s Imperial Opera house. In the early 1900s, Eduard Jr. struck a deal with Demel’s, which resulted in them producing the ​‘Eduard Sacher Torte’ which tastes no different to the original – except for the placement of the jam filling.”

In a city with a conspicuous sweet tooth, Vienna’s Sacher Torte needs no advertising. Besides local demand this Viennese treat enjoys a thriving export trade. Every year Demel produces more than 80,000 of these chocolate-glazed cakes, some packed into boxes and shipped off to faraway destinations.

Thus, cake and coffee at Demel, located near the Hofburg Palace, needs to be on your Vienna to-do list. The interiors are Neo-baroque with black uniformed, white-aproned waitresses who address customers in a respectful third person manner, enquiring which coffee Madame would like to have with Madame’s Sacher Torte. www​.demel​.com

Sleep
In the urbane heart of Vienna’s creative district, and within 15-minutes of Vienna‘s biggest Baroque attractions, is the Altstadt Vienna – a member of the exclusive Leading Hotels of the World group. Altstadt is housed in a 19th-century luxury patrician townhouse. It’s filled with priceless contemporary art and 45 uniquely sensual rooms and suites, stylishly spread across four floors, and über-hip in every decadent way imaginable. www​.slh​.com