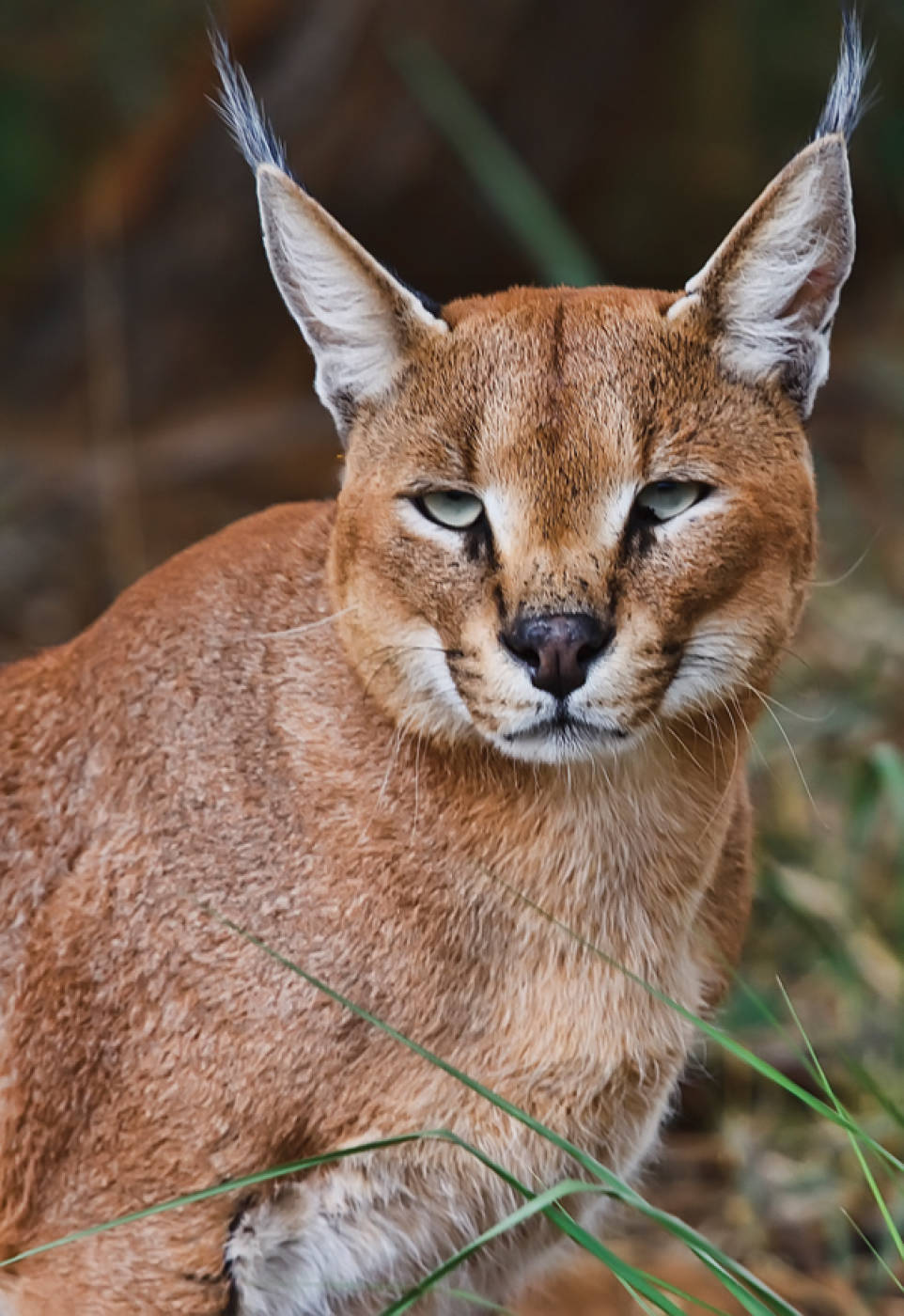 Whilst on assignment in Namibia my camera assistant and I got ready to leave the open-air social gathering of working guests at Harnas Wildlife Sanctuary. It had been a 4AM start and following a couple of beers and a belly full of BBQ our eyelids started feeling heavy. This – and the sound of an approaching storm – was our queue to politely turn in for the night. A bolt of lightning struck the nearby generator rather spectacularly and we lost electricity. A thunderstorm in Namibia is a joyous affair as rain seldom comes. Someone said that the back-up generator was on the blink so we’d be in darkness until dawn. 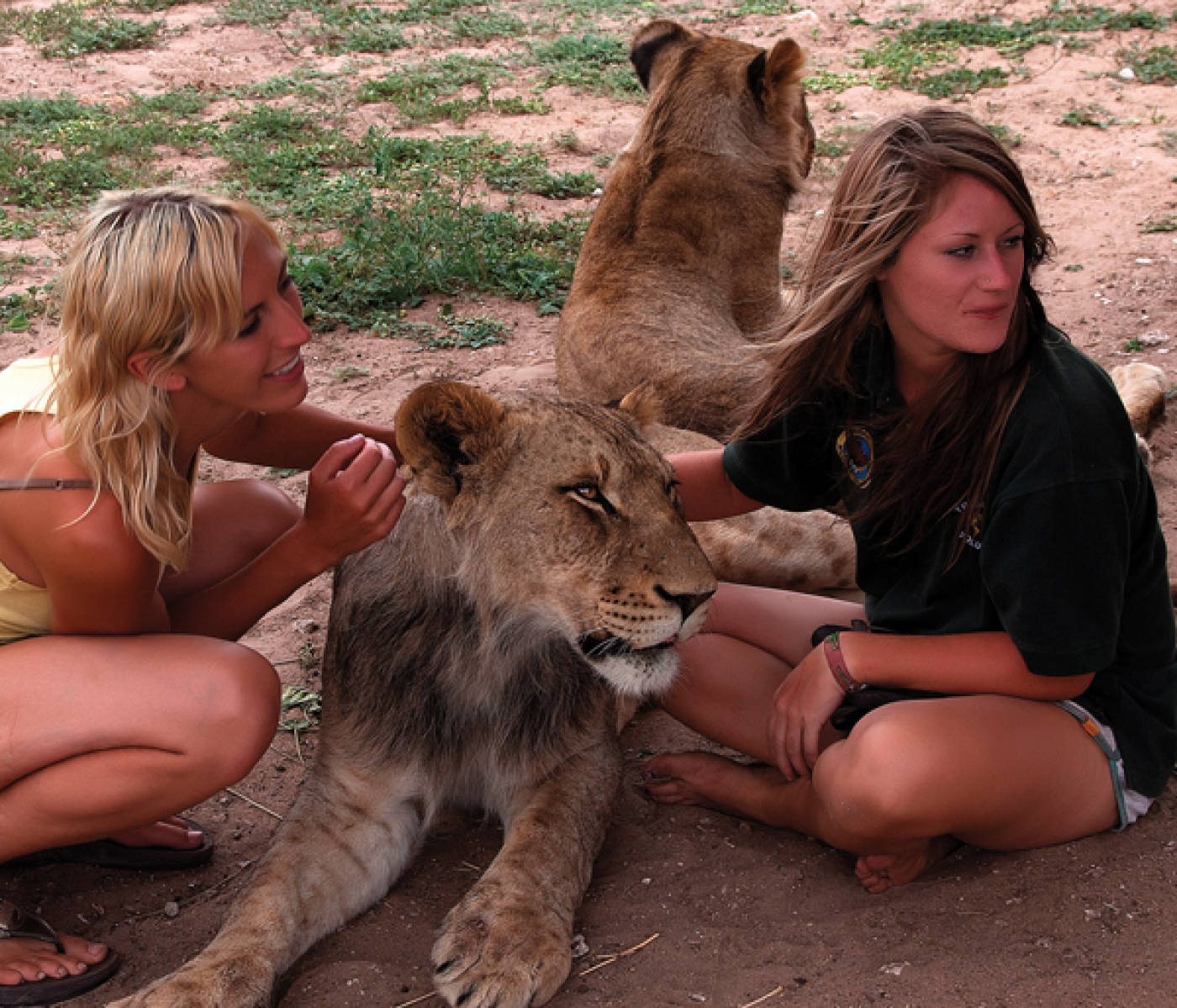 We sat around in the blackness for a while discussing what would secure the lions and leopards behind their electric fence enclosures, when there’s no electricity. 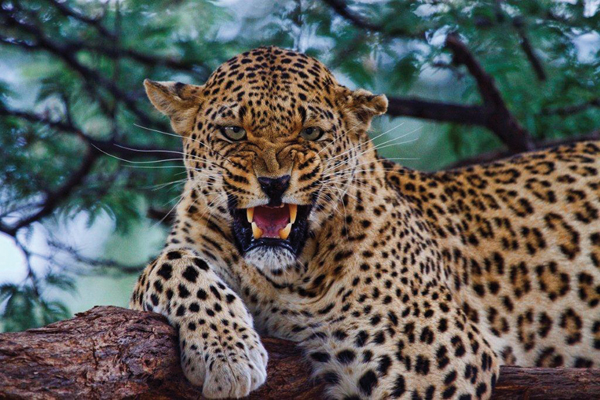 ‘Everyone piles into the 4×4’s and patrols the fences,’ said Frikkie, the gung-ho manager of the volunteer workers. 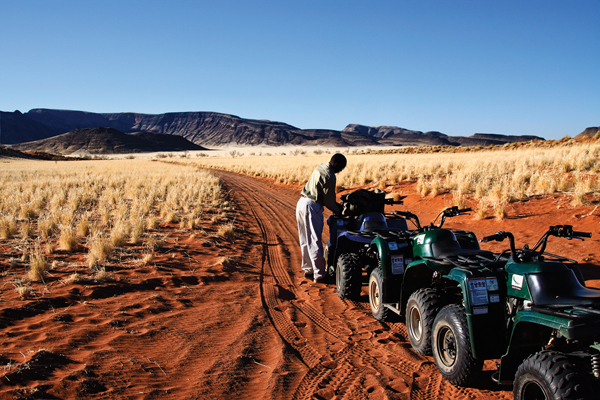 I wondered how many vehicles they would need to cover 100 square miles and what exactly they would do if they came across an escaped carnivore.

A voice somewhere enquired how the carnivores would know that the electricity was out.

‘It’s the baboons’, someone volunteered. ​‘They get out first. And once they’re out, the lions follow.’ 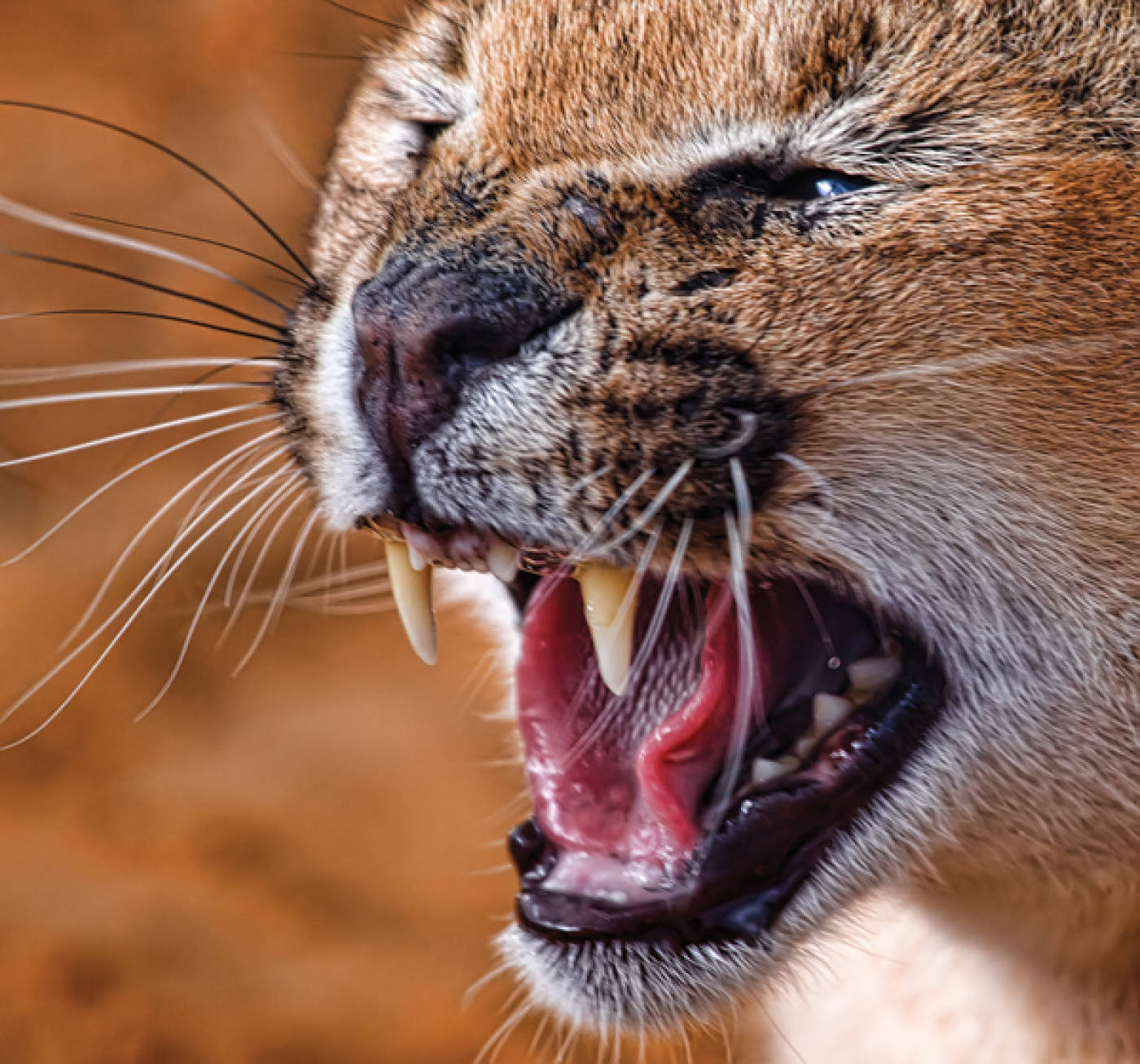 The torrential rain was worsening and after some more scaremongery leaving us with very clear visions of lions wandering about the place, Heather and I decided to make a run for the 4×4, parked some distance away. We whipped out our African umbrellas (plastic supermarket carrier bag), tied them neatly under our numerous chins, then ran into blackness of Africa. As we neared the rickety wooden bridge several crocodiles flung themselves with unsettling speed and agility into the water beneath it. I cautioned Heather to hold onto the railing when crossing as I imagined them surging under the bridge, waiting for something to fall in. 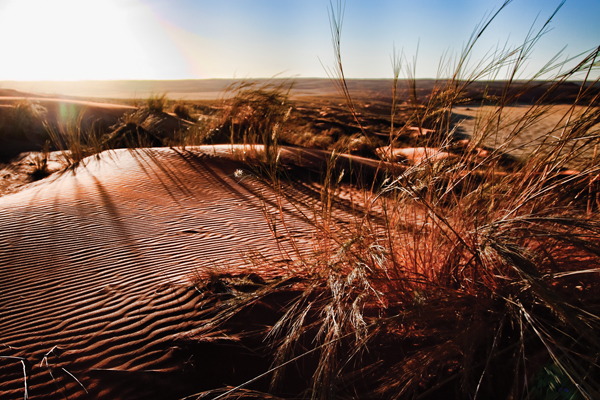 We eventually found the car and slid off in the general direction of where we thought our accommodations were. Following several inane attempts at finding the right road, we bounced down a familiar looking track. Our headlights flashed on Klippie, the giraffe who dislikes men and had earlier relentlessly pursued a volunteer he’d taken umbrage to. Klippie, I saw, had taken the sensible precaution of folding his height down and now sat hunched off to one side.

As the entrance to our bungalow was blocked by a heard of menacing looking buffalo Heather rationally backed the SUV up to the door. We are both ladies of traditional African build, so clambering over the camping equipment and exiting over the tailgate was immediately dismissed. Then, after a moment’s thought Heather volunteered that I should swiftly exit from the passenger side and unlock the front door whilst she flashed headlights and hooted at the buffalo.

Sodden we stood in our respective foyer puddles, wondering what to do next. We found a torch with weak batteries and a single tea-light. Whilst Heather fretted about the wetness of it all, I took a shower in the dark. 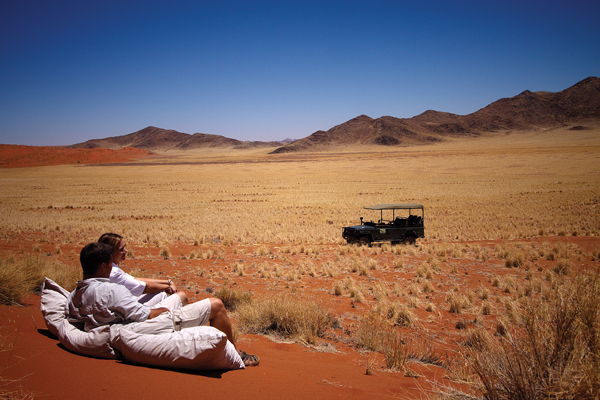 Fresh faced, clothed in silk kitty Marks and Spencer pyjamas, I sat on my tall farmhouse bed looking through the picture window at the headlights of several 4×4’s bouncing off in the distance. I quietly wondered if the lions had escaped yet. A nearby somewhat audible roar assured me that they indeed had.

I contemplated a complementary bottle of red wine left by management and wondered if the buffalo had dissipated from the front door yet – my Amarula apricot liquer was in the car, as was my mobile phone and camera bag. What the hell, I thought, a drink is a drink and proceeded to pour two glasses.

Back on the bed, glass in hand, I contemplated the day, recalling the leopard that had growled at my camera, the lion cub I’d bottle fed and the cheetah that kissed me in the neck. Then a movement nicked the edge of my gaze. I wasn’t too sure what it had been but now, looking more closely at the window, I saw that Heather, in her infinite wisdom, had opened one. Here we were, in the middle of an African thunder storm, in a nature reserve, surrounded by wild beasts that had probably already escaped the electric fences that contained them – and she opens a window. I stalked across and slammed it shut then sat back down again glumly formulating a rebuke I would deliver when Heather emerged from the shower.

‘Heather. There’s an animal in the room,’ I bleated weakly.

‘What?’ she shouted from beneath the shower. ​‘Just open the window and shoo it out.’

The bloody window was open. That’s how it got in. I wanted to say, but I was muted by large yellow eyes staring me down. 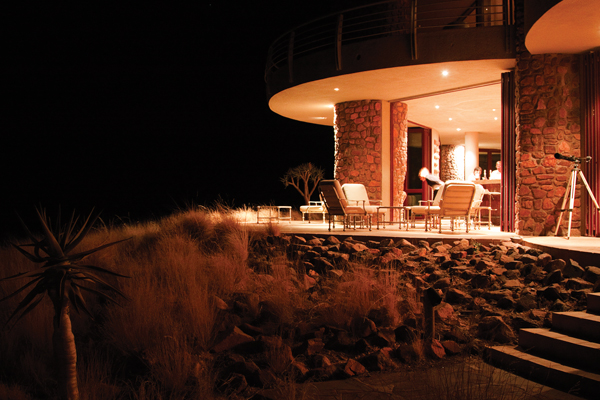 The cat and I stared at one another. A thousand thoughts raced through my mind. This was not at all how I had imagined my life would end. None of my family or friends would believe it. I, after all, only required a colour TV and coffee making facilities for a bit of excitement. Would they understand, I wondered that I’d had enough of being a cupcake and also wanted a bit of that swagger that comes from doing insane things. So this is it then, mauled to death in my own bed. I had the overwhelming need for a cigarette, a habit I’d quit a decade earlier.

Whilst I was finalising my funeral arrangements Heather took a few tentative butt-naked steps into the room and flapped her towel at the cat.

‘For crying out loud, he can’t bloody well shoo anywhere,’ I cried. ​‘I closed the darned window you opened.’

A sudden wave of heroism overcame me and I launched towards the window which sent the big cat under the bed. I unlatched it, flung it open and in two bounding leaps, found myself standing on my pillows, somewhat hysterical.

What with all the commotion and shouting, and now a clear escape route, the cat blasted through the open window at a speed and velocity seldom seen outside of a Roadrunner cartoon.

After we calmed down some I insisted on a cigarette and opened the patio doors. I lit a fag and puffed away under my African umbrella, glass of wine in hand whilst Heather, now clothed, scanned the surroundings, shining the faltering torch around like a search light, imagining all sorts of things staring back at her in the dark.

We saw 4×4 headlights bobbing off in the distance and wondered if we could SOS them a distress signal, then thought better of it and turned in for the night, taking turns in commending one another’s bravery. Fresh hysteria’s ensued when I found my bed was being dripped on through a crack in the roof. We vowed to take turns in keeping watch during the night. Thus, having soundly slept through mine, I was amazed to find us both still alive when the birds assumed, as always, the responsibility of opening the day.