The stately V8 S saloon model slots in between the Flying Spur V8 and Bentley’s flagship W12. But it’s not just another Flying Spur with a few technological and visual upgrades; the V8 S represents everything the range stands for – pure unadulterated luxury combined with outstanding performance and considerable sporting muscle. 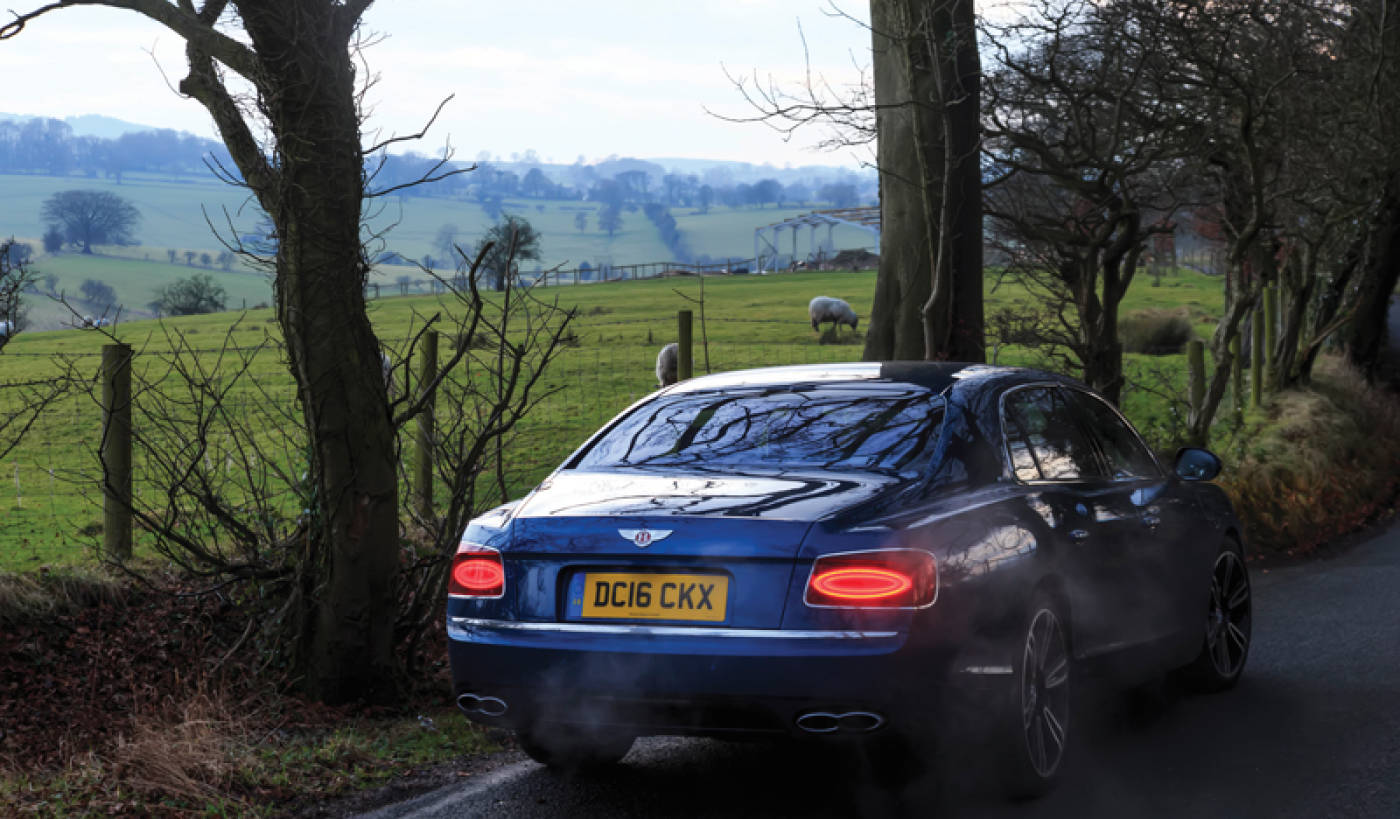 With flowing curves, crisp, clean edges and sharp feature lines which complement its muscular rear haunches, the V8 S creates a remarkably sleek silhouette. To match its enhanced performance and give it a dramatic and purposeful appearance, it has a number of athletic styling cues which hint at its sporting capabilities – like the V8 S badging, the iconic matrix radiator grille – painted black, and the bespoke V8 S treadplates revealing the model’s identity. The press car wore a set of 21-inch six twin-spoke black machined alloys (added from the immense options menu, encouraging you to open up your imagination almost as wide as wallets), gloss-black wing mirror covers and a black rear diffuser. The taillights wear optional tinted lenses as does the headlights. The changes are small, but enough to make a powerful design statement.

Inside the cabin its exquisitely crafted in every sense; from the thickness of the chrome on the air vents, the generous armrests, to the vault-like heft of the doors. The Flying Spur comes complete with a three-spoke steering wheel, a leather and aluminium gear-lever, shift paddles and the foot pedals are drilled alloy. The diamond-quilted, perforated seats and doors are hand-crafted of the highest quality Brunel hide, the fuel and oil caps are jewelled, and the headrests are embossed with the signature Bentley V8 S emblem. In the back where you’d be spending most of your time, there’s a refrigerated bottle cooler with frosted glass and bespoke crystal champagne flutes, all-round ventilated two-toned seats with massage function and entertainment is provided via 10” touchscreens – which makes it the ultimate place to work (or relax) on the move. 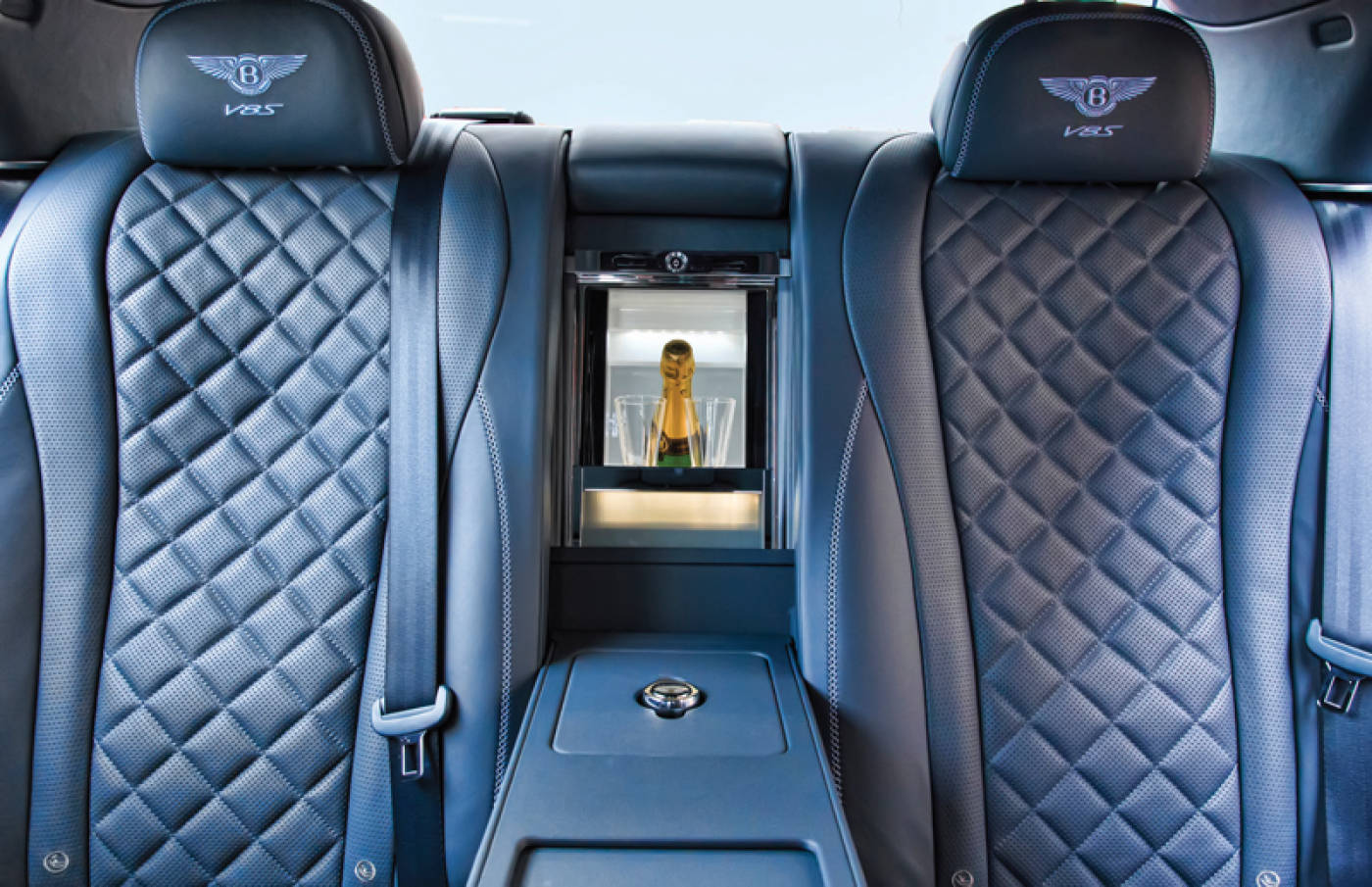 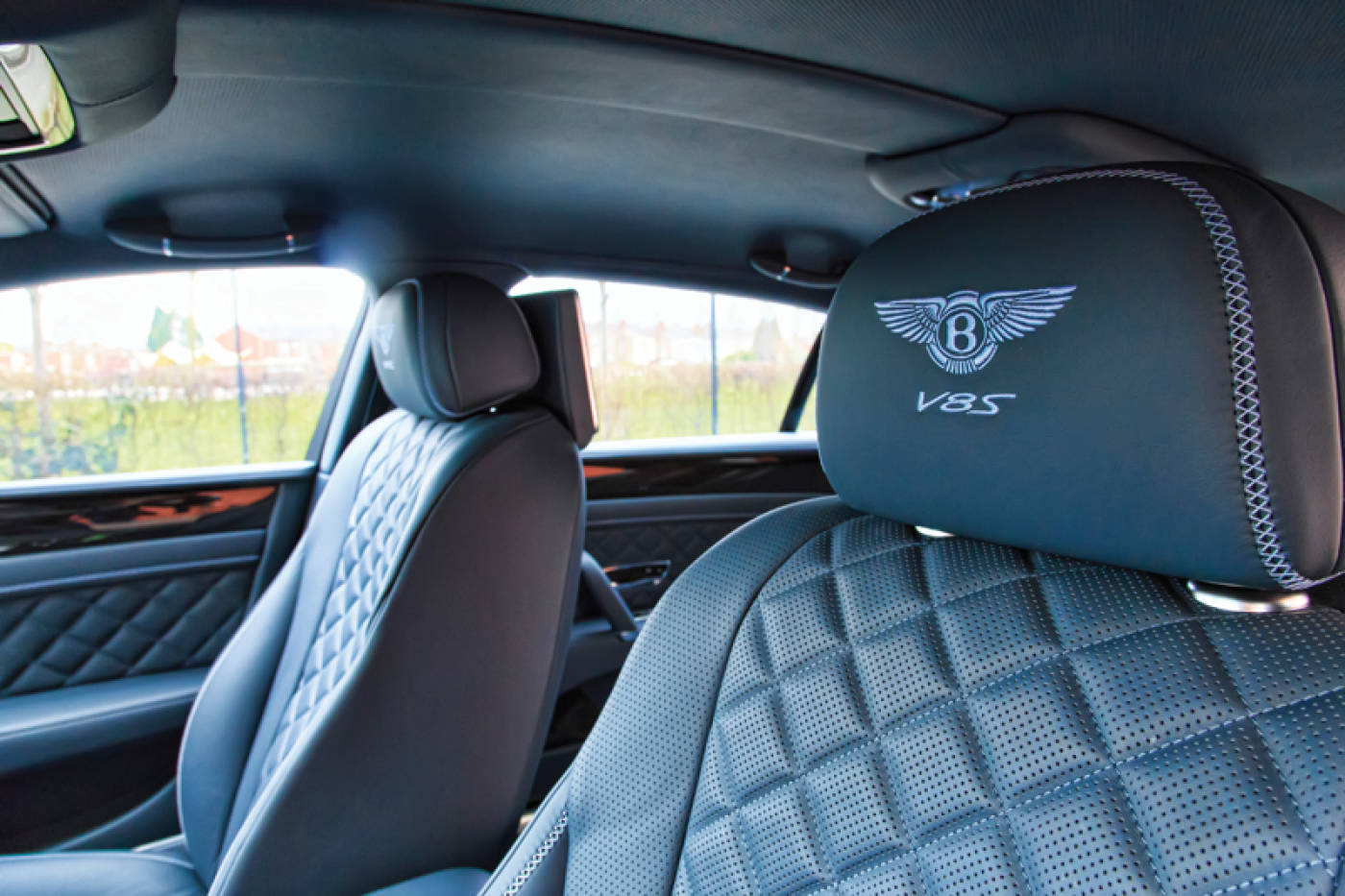 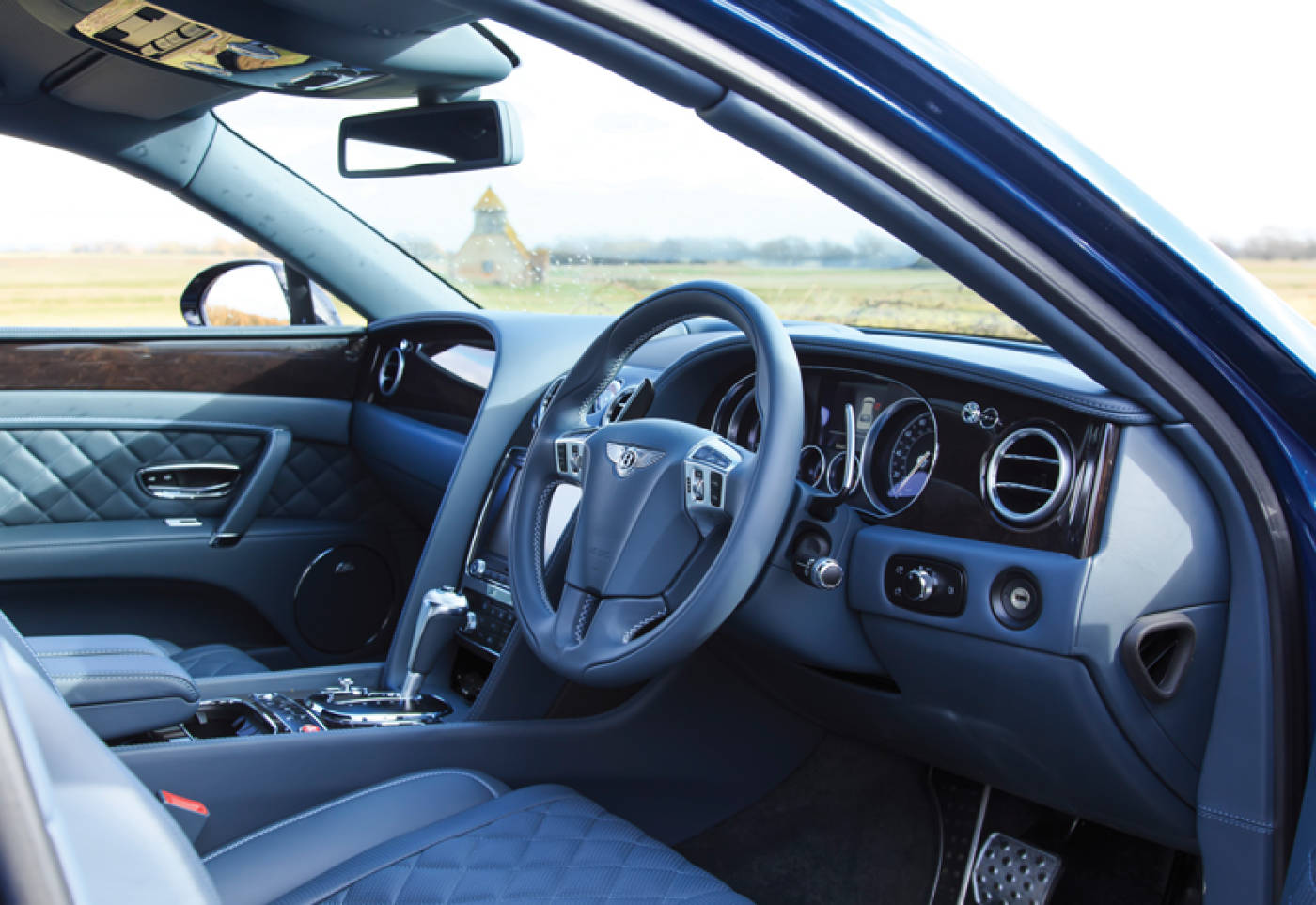 It’s the perfect choice for those who wants ultimate refinement yet uncomplicated driveability.

This solid structure carries through to the commanding, unwavering driving experience. Under the bonnet is a powerful V8 S which is the same 4.0‑litre, twin-turbo, V‑8 found in the base Flying Spur, but with a few added tweaks, which propels it to 60mph in 4.6 seconds and a top speed of 190mph. Power is delivered via an all-wheel-drive system with a 40⁄60 rear-biased torque split.

In ​‘Drive’ mode it retains its luxurious, limousine-smooth ride and legendary ability to transport passengers in unrivalled comfort. In ​‘Drive’ it’s not nimble, it doesn’t like changing direction fast, but it will surge along an A‑road at a suitable pace. The gearbox is lazy and takes a second to register your request, but once the message gets through you’re launched. You’d have thought that a vehicle 5.3 metre in length would get hysterical when shown it a corner, but it doesn’t. The handling is sharp, the steering is light and it resists roll with admirable spirit. But there’s no disguising the fact that there’s two and a half tonnes of metal following the nose – which requires a slow in fast out driving style.

This is a large, prestigious saloon, with commanding on-road presence – a muscle car, in a dinner suit. With its advanced suite of on-board technology, you could run your empire from the back seat or get up front, drop it into Sport mode and go on an epic drive. This motor is tuned for power and performance; here Bentley have made one of the world’s fastest luxury four-door saloons even faster and more agile. I couldn’t stop smiling the entire time I was driving it.

Fuel: You’ll average around 25.9mpg on a 95-litre fuel tank which gives you a range of around 450 miles between fill-ups.
www​.bent​ley​mo​tors​.com/​e​n​.html