I caught my breath when the sensual, curvaceous pale blue body rolled into view, its engine burbling, silken in tone. It looked bulletproof, as if it owned the ground beneath its wheels. Soon I would discover this to be the best GT I’ve seen driven. It’s aggressive, mean looking, handles like a bronco pony, twitches in the bends, and when you put your foot down you’re just not ready for what’s about to happen. Given half the chance I felt sure the DB11 would kill me, but at least I’ll be roaring through the Pearly Gates. With my hair on fire.

Aston Martin’s DB11 is the latest model to join the line-up of desirable sports cars. They’ve brought the GT coupe’s rakish good looks right into the 21st century. It’s a completely different animal to anything that has come before it with an all new Aston design, a downsized engine, a broken nose, funky aerodynamics and just a tiny bit borrowed from Mercedes. Essentially the DB11 is a luxury GT in the mould of, but sleeker than, the Bentley Continental GT and Ferrari GTC4.

Historically Aston Martins’ were handmade, which meant nothing fitted, seldom worked properly and eventually would fall to pieces. Then along came the pretty-faced DB9 which had been properly developed but lacked chutzpha. Then the DB9’s successor arrived – the classy, sleek and graceful DB11, heavily influenced by the DB10 of James Bond ​‘Spectre’ fame.
Speaking of their aeroblades, Chief Creative Designer, Marek Reichman says: ​“Aston Martin’s Aeroblade is a unique Patented Aero system that utilises the benefits of high pressure air as a blade to reduce any need for a large spoiler on the rear of DB11. It is a device that allows a greater amount of Design freedom to create the purity, drama and therefore, character, of the DB11. Pure and dynamic, it helps to create the core centre line of the car which is instantly recognisable as a true DB.”

The DB11’s styling is modern and aggressive – an intentional move away from Aston Martin’s traditional elongated curves. With an aluminium platform (designed by a former Lotus man), it’s now marginally larger and longer, has a pouty grille with a slight overbite, a clever airblade system which removes the need for a rear spoiler, slick aerodynamics which cheat the winds with Vulcan-like cut-off side strakes that do wizardry, and a rear-end emblazoned with boomerang LED tail-lights. Yet it still holds onto the trademark long, sculptured bonnet, sweeping roofline and short rear overhang.
But it’s in the cabin where the design gurus have done their work. Where plain, cheap buttons, stalks, levers and switchgear dragged the DB9 down, you’ll now find solid cutting edge style married to expensive-looking fittings. An aluminium-look is common to much of the trim, as is the Brogue-finish on the leather.

The DB11 is mostly made up of aluminium door frames and body panels, with sills and bumpers of injection-moulded plastic-composite, and carbon-fibre bits. It weighs in at 1,700kg and accommodates a 5.2‑litre, twin-turbocharged V12 engine – all of Aston Martin design and development, which makes this a 200mpg road trip champion that can get to 62 in 3.9 seconds.
The DB11 is the first Aston Martin to fully benefit from the recently formed technology exchange partnership with Mercedes-Benz (who own five percent of the British car manufacturer). Essentially the in-car electronic architecture has been carried over from the German firm, which means Aston has access to the latest infotainment and sat-nav technology, loads of standard kit.
There’s a strong emphasis on comfort, silken-edged interiors and refinement, with ample space in the front, with plenty of head and leg room for a couple of tall adults. The back seats are best suited to children as there’s very little head room and virtually no space for legs.

Press the starter button in the centre of the dashboard and the V12 gives a death metal roar of life. The sound man at Aston Martin has paid careful attention to the DB11’s first ever turbocharged soundtrack. At low revs the engine produces a purposeful warble, and gets beautifully vocal as it climbs past 3000rpm, the point where the turbos truly come into full voice. This is the greatest sound produced by any car – think Barry White eating a wasp – a trademark booming, attack-dog, wall of sound generated by 12 manic cylinders.
Driving the DB11 is a phenomenal – there’s some serious engineering between you and the road. But it’s hard to keep the DB11 down to a stately lack of haste. It’s straining at the leash, raring to break free and catapult to the horizon. Yet it’s impressively stable at motorway speeds, leaving you to relax and enjoy its engine drumming away. When you cautiously place your foot on the accelerator there’s no waiting for the engine to gather its thoughts before the twin-turbos kick in. The hugely capable V12 is there, in your face, raw, utterly exciting, and ready. 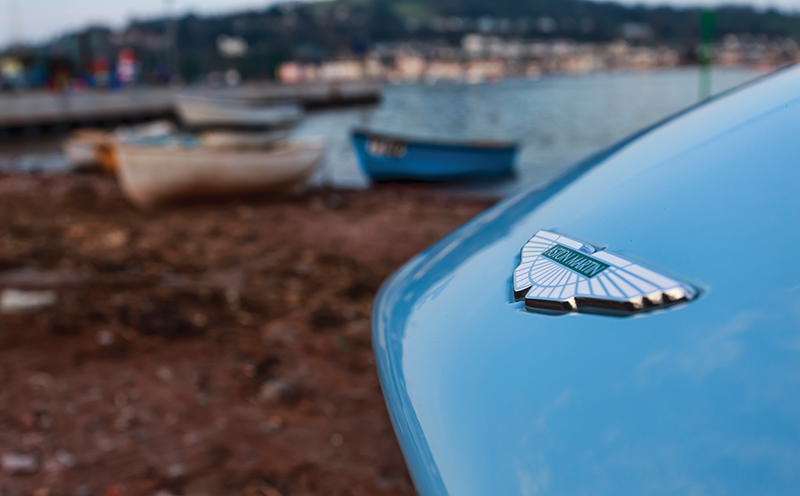 The DB11 squats theatrically under acceleration, and in Sports+ the steering is twitchy. Through bends the agility of this rear-wheel-drive GT is outstanding. There’s no floatiness going on here, no pitch or heave when you show it a corner, and dependent on which mode you’re driving in, it remains flat and composed and stable over bumps, with lots of driver engagement going on.
If I had to nit-pick, and obviously I do, I find it annoying that Aston Martin has fixed their 8‑speed ZF gearchange paddles onto the steering column rather than on the back of the steering wheel itself, which is an issue when needing to change up a gear on long bends – especially in Sport+ when manual gear change is imperative beyond certain revs.

At £154,900, the DB11 is not cheap, and neither are its running costs, or insurance premiums. Its obvious rival is the Bentley Continental GT which, for the V8, starts at £150,000 (and remember, Wayne Rooney has one). However, you don’t buy an Aston Martin DB11 to save on your motoring bills. You’re buying into the motoring history of one of the fastest, most desirable, long distance cruisers ever built. You’re buying a head turner, one that draws a crowd. Mobile phones will light up the moment you briefly appear in someone’s rear view mirror, then follow you as you jettison past. This is Aston Martin’s biggest achievement. This is the most hard-core Aston Martin ever made; there is no better GT out there.