“Of all the supercars you’ve driven, which is the one you’d like to call your own,” asks the delivery driver from Jaguar Land Rover UK – an elderly, soft spoken gentleman.

This is a question I’m often asked and, in the most basic of terms, needs to be answered in full.
​“Look at it this way,” I say. ​“Porsche is common place, and judging by the reactions of other road users, their drivers are held in as much disdain as BMW​’s; Ferrari drivers are considered show-offs. Maserati owners are aspiring to Bentley’s – who are of the new money brigade, as is Aston Martin; and Rolls-Royce is too much money. After schmoozing around in cars like this for a week at a time I’m often too glad to hand the keys back as I’m in constant fear of having the vehicle trolleyed in a car park, keyed because of what the car symbolises, and constantly being challenged by boy racers.”

“Then there’s Jaguar’s F‑Type – I’ve driven all their flavours,” I continue. They come in at a fraction of the price of other super cars but ten times the fun; then add to that a 7‑year service warranty! Handing the keys back each time pains me. So, to answer your question – Jag’s F‑Type!”

The old bloke nods knowingly. He gestures I should enter the passenger side. We were heading to Ashford International, my local train station, some 17 miles away. On route, he would talk me through the car’s quirks and explain the upgrades. Looking forward to the drive, I strapped myself in and sat ready with my notebook. We proceed in a stately lack of haste – without him engaging Sport mode, touching the paddles or even activating the exhaust button.

He explains that the F‑Type is built by Jaguar Land Rover’s Special Vehicles Operation (SVO) division and is their fastest road car to date. It’s lighter, faster and a sharper version of Jaguar’s F‑Type R All-Wheel Drive. When you push all the buttons, which dials up the performance, it feels like a track car with the volume turned full-blast, but then in auto it’s subdued.

UNDER THE SKIN
The SVR engine was initially in the Range Rover and has since been transplanted into Jaguar’s F‑Type, who come with sensible four- and six-cylinder engines further down the range. The V8 SVR is the lunatic, snarling Pitbull, rivalling the 911 Turbo.
To put the SVR into perspective, let me introduce you to the current F‑Type line-up. The base V6 model is equipped with 340 horsepower, while the F‑Type S comes with 380 horsepower. Then there’s the F‑Type R AWD, which packs a supercharged 5‑litre V8, 550 horsepower, clocking up 0 – 62 mph in 4.1 seconds and a top speed of 186 mph. The Project 7, uses the same engine as the SVR tops off with an additional 17 horses. However, the SVR, with its 8‑speed automatic gearbox and steering paddles, raises the stakes by introducing the intoxicating supercharged V8 to 575 horses, rocketing from 0 – 62 mph in 3.5 seconds and a top speed of 200 mph.

SOUNDTRACK
All this menacing performance is complemented by the most insane soundtrack delivered via a titanium and Inconel exhaust system. Forget AMG, or anything with an M badge – they can’t get near Jaguar’s genius hard-edged exhaust tuning work which bellows a deep and menacing V8 baritone under full throttle and gradually increases in pitch when redlining. Downshifts brings crazy, smile inducing, machine gun-like pops and crackles from the rear. It is music to the ears.

SUPERMODEL LOOKS
To look at, the SVR is beautiful. The proportions are just right, tall in the hind legs, wide hips, narrow waist, good curves in the front and full lips, topped off with a slick panoramic roofline. It’s a perfect mix of arrogance and grace, with just a few choice pieces of jewellery and a gorgeous wing on the boot.

IN THE CABIN
As far as amenities go, this isn’t some spartan race-car plucked straight from the track. Everything is plush and colourful with quilted leather seats, a multi-functional leather steering wheel, anodised shift paddles, suede headlining, ambient light, a Meridian sound-system and touchscreen controls. 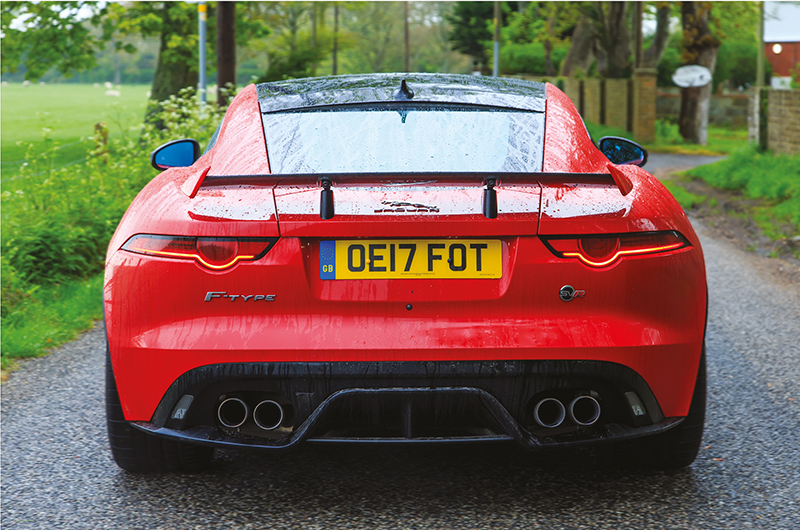 TALK TO THE BANK
This specific SVR Coupe comes in at £110,880 (plus £8k for extras) which represents huge value when compared to the 911 Turbo S or the Vantage S which will respectively ask for £28k and £35k more yet is no more powerful than the SVR.

ON THE ROAD
This is one heck of a car. It oozes opulence, British design, finesse, and comes complete with astounding performance and drama. At first the steering seems a little excitable, twitchy even and you’ll take a while to adapt to its exaggerated response rate, but once you do you’ll love the stability, fast throttle response and traction control. This car can hustle at insane speeds; its raw pace is astounding and huge fun – especially when switching off the safety systems and doing sensational slides, emanating clouds of tyre smoke.

The recipe of this car (and the sounds it makes) suggests it’s an off the leash attack dog, yet its handling is polished. Put simply, it’s an adrenalin-rush drive with a Clint Eastwood bad ass-ness about it, which is greeted by thumbs up from fellow road users and mobile phones pointing out of windows when rocketing past, emitting some exhaust gun shots they’re hoping to record.

We pull up outside the train station. The old chap from Jaguar Land Rover has three attempts at exiting the vehicle, stating that low sports cars are for the young.
​“So, when are you placing your order?” he enquires. I give this some thought and explain that my husband is tight with the cash and that I’ll need to wait for him to croak before placing my order, but I’ll be sure to swing by the dealership on the way back from the crematorium.