I’m sitting in the prestigious lobby where the jewels of the famous Trident brand are exhibited, waiting to see the cutting-edge production lines of Maserati’s factory in Modena – Italy’s Motor Valley. Giorgio Manicardi, a Maserati authority since the mid-1960, who spent 35 years as sales manager at Maserati before retiring, passionately tells the Trident’s tale. He explains every detail in hand crafting these limited-edition exotics. Maserati uses no robots in its factory, but plenty of technology is evident on the production line route. 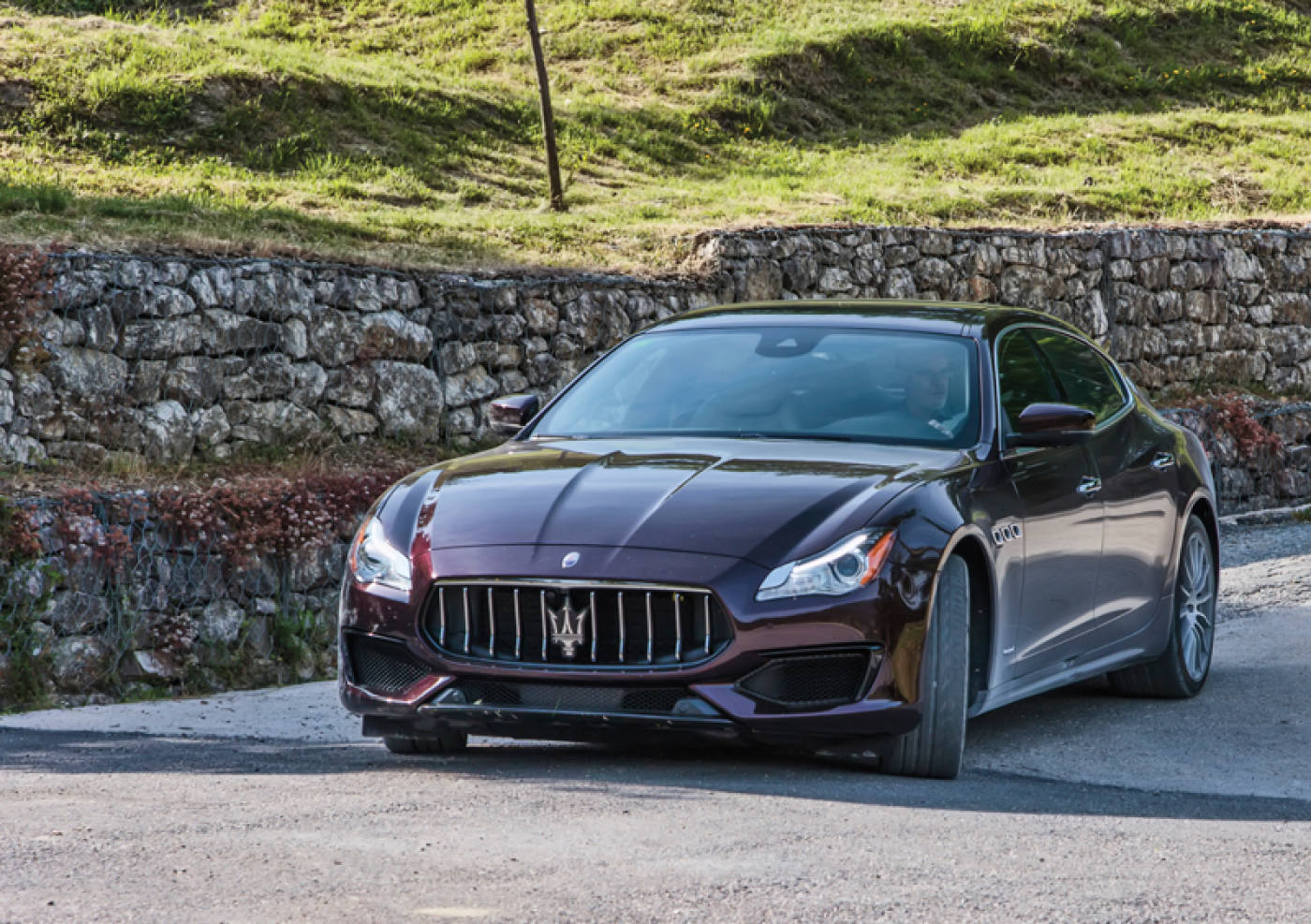 The Modena plant turns out only especially commissioned GranTurismo’s and GranCabrio’s and once built just a few hundred cars per year. Now, with new models, the addition of factories in Mirafiori and Grugliasco and expanded export sales, the total for 2016 is 41,200 – six months into 2017 and already 25,100 have been shipped.

With only racing in mind, the Maserati brothers started the business in 1914. At first, they worked on other production cars then, 12 years later, they created their own.

Guiding me through Maserati’s sterile factory Manicardi explains this to be unlike regular car factories. Here, he explained, there is no noise, because making a car by hand requires no machinery. 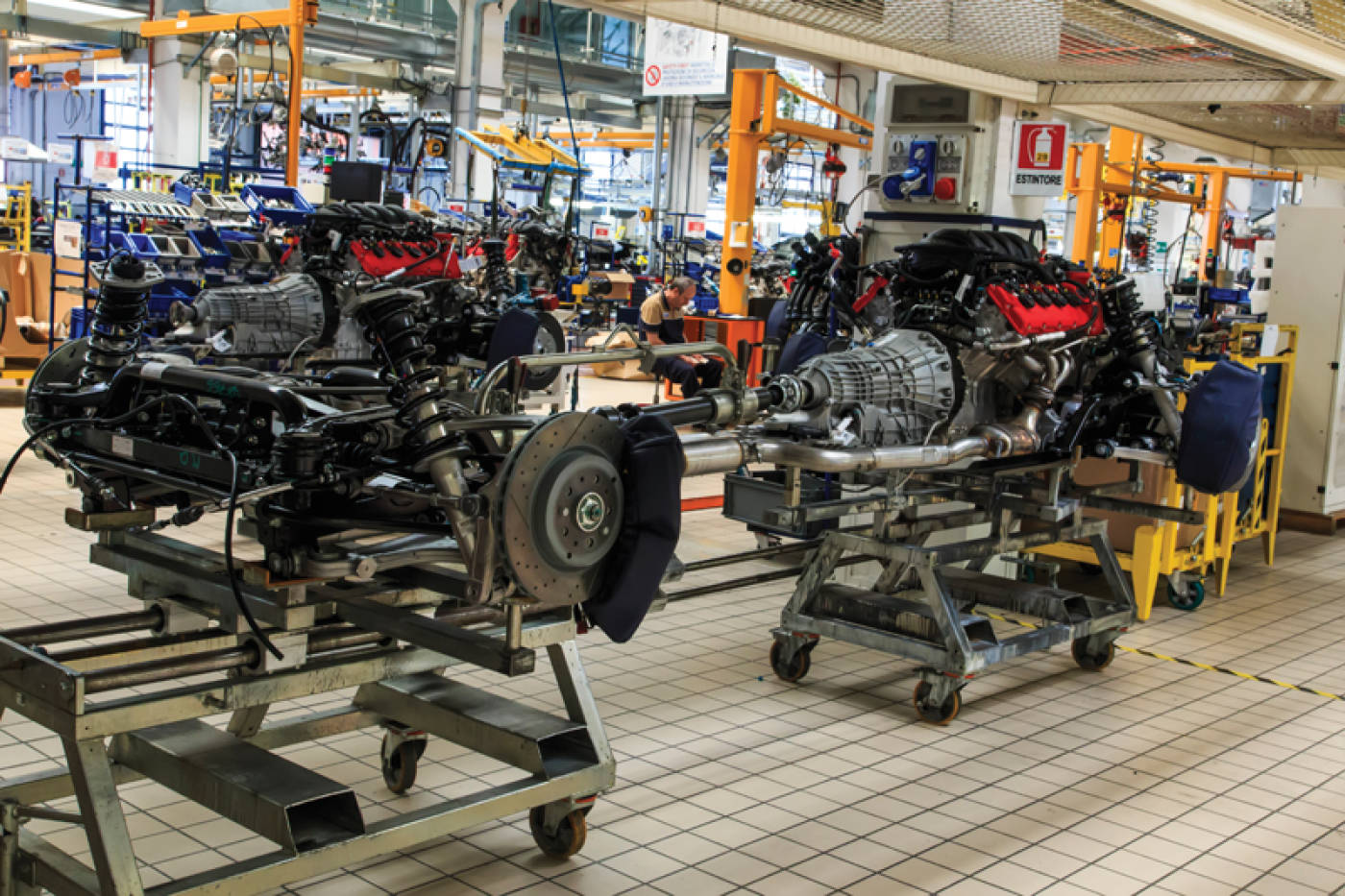 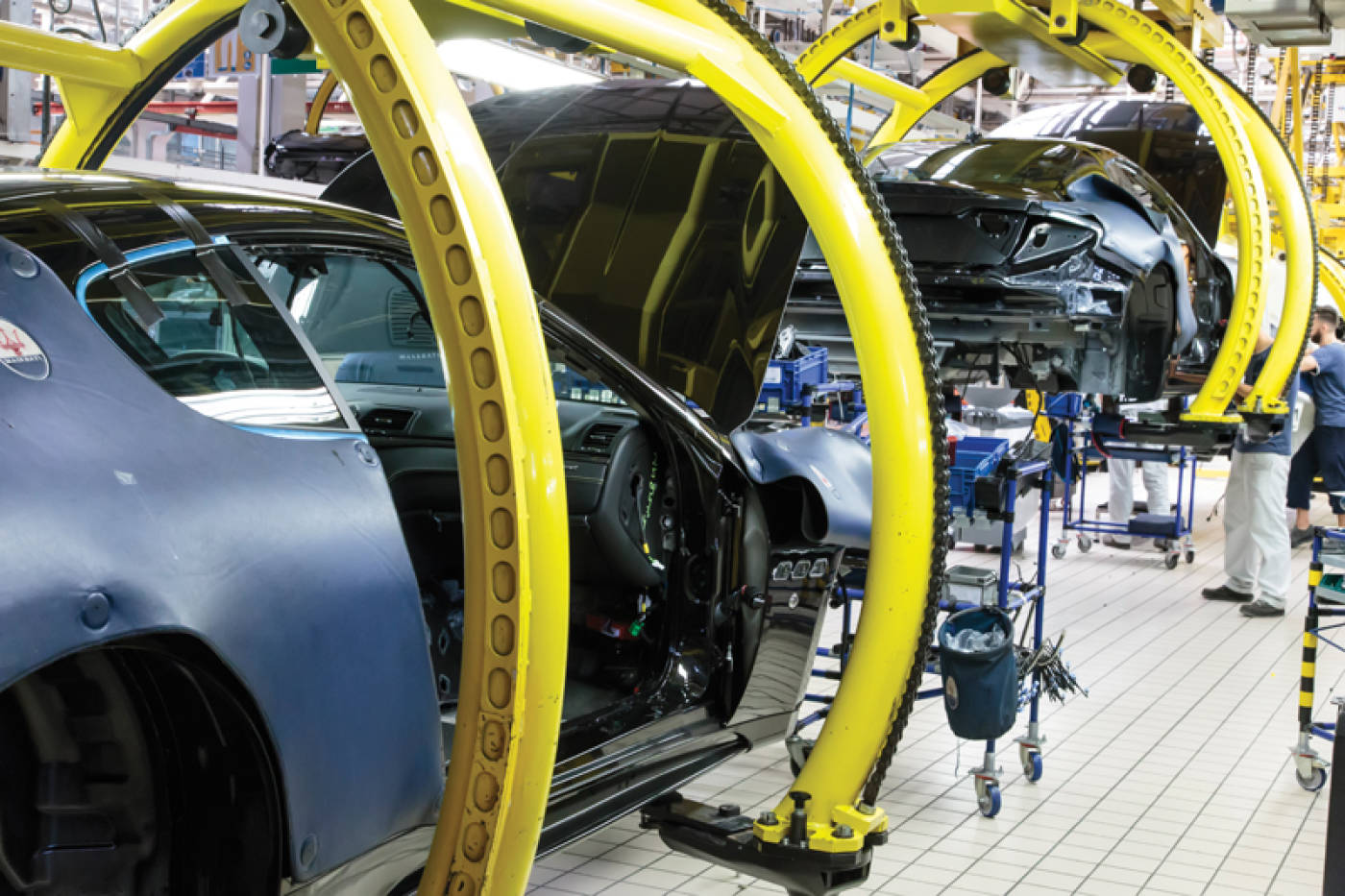 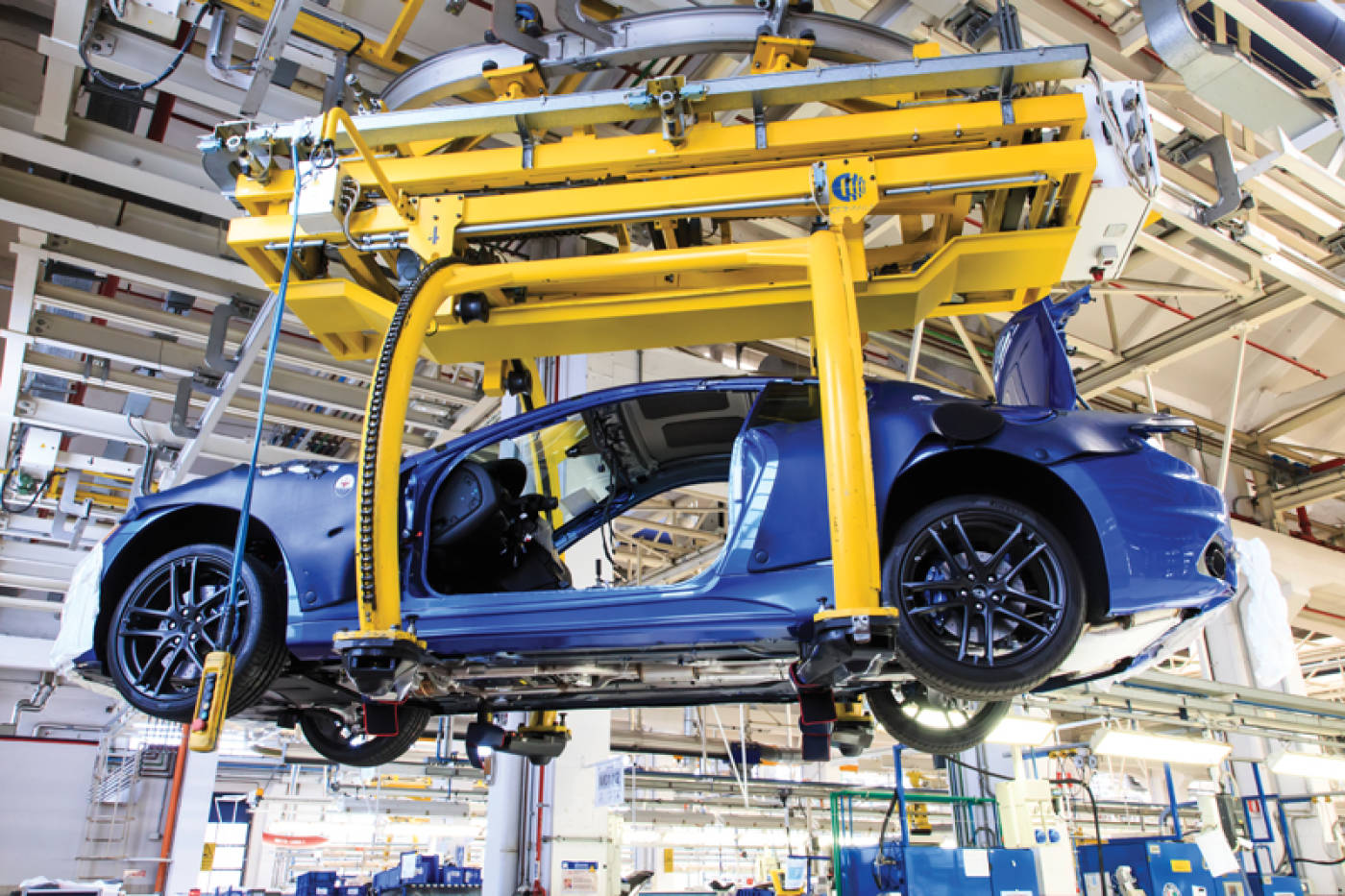 Each Ferrari engine is run and tested at the Maserati plant before installation.
​“Maserati, she does not make her own bodies, ITCA in Turin forges them,” says Manicardi. ​“They’re then taken to Ferrari in Maranello to be painted. Ferrari also assembles the engines, which we test here at Modena. All of this arrive here at our factory in enclosed trucks.”

After initial prep work, the empty shells are loaded onto the first production line for wiring and mechanics – like fitting the powertrain (which requires 26 bolts). Every 24 minutes an overhead rail transporter delivers a car onto the next station. ​“Each conveyor unit can elevate and rotate the car 90 degrees, right and left,” says Manicardi. ​“Ferrari use a similar system, but without the rotation.”

Each car has a rolling trolley at the work station which contains all the parts, including the customer’s printed specifications. The trolley tracks the car as it advances through the assembly line. Halfway down the line, the car is raised off the ground for the further stages of assembly, which are more easily undertaken from beneath.

Manicardi points to a large overhead digital clock. ​“Each station has two or three production-line workers who need to complete each task along the first 12 stations within 24 minutes. If one worker isn’t finished when this time is up, he moves along with the car to the next station. The line never stops.” 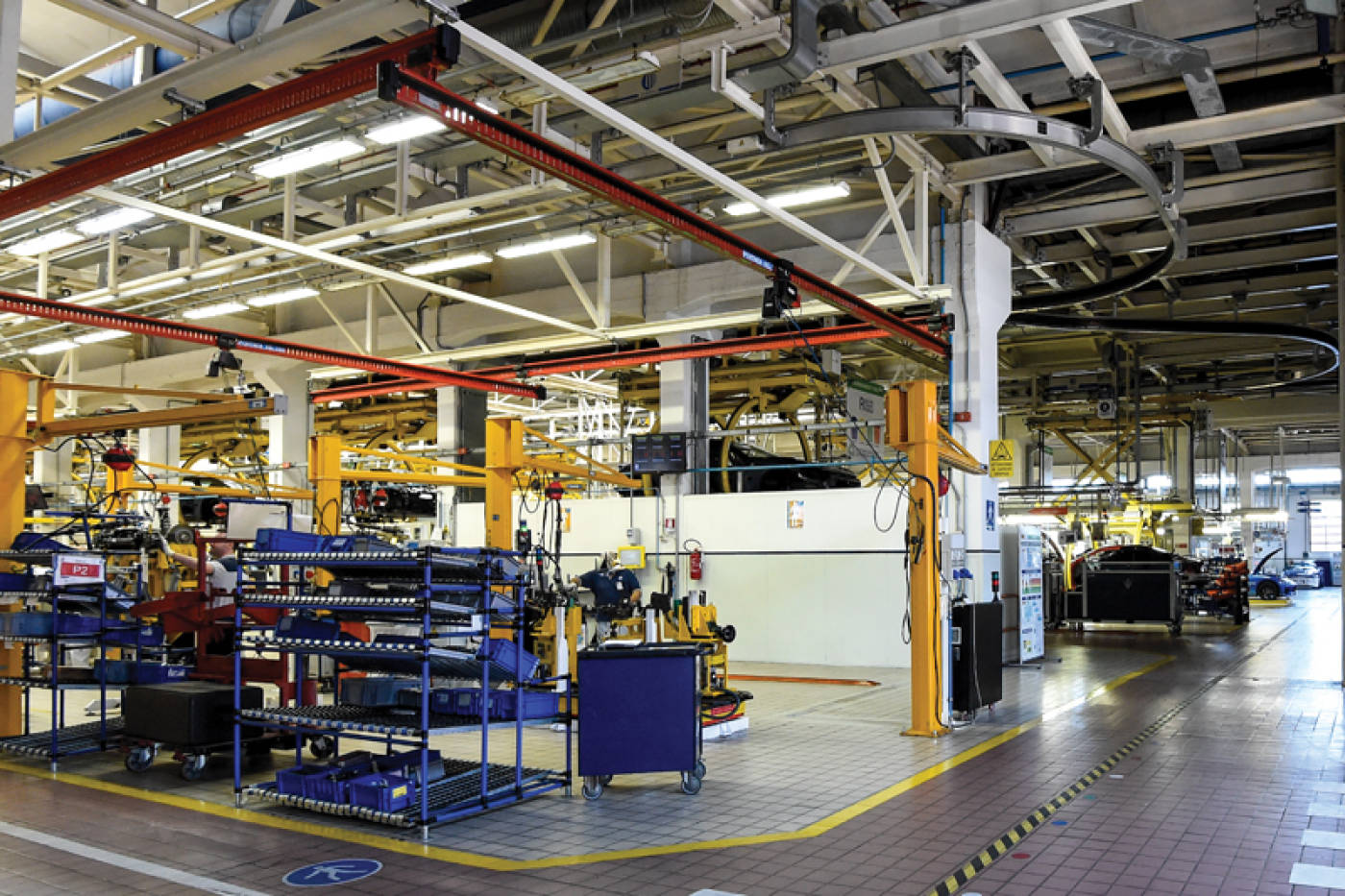 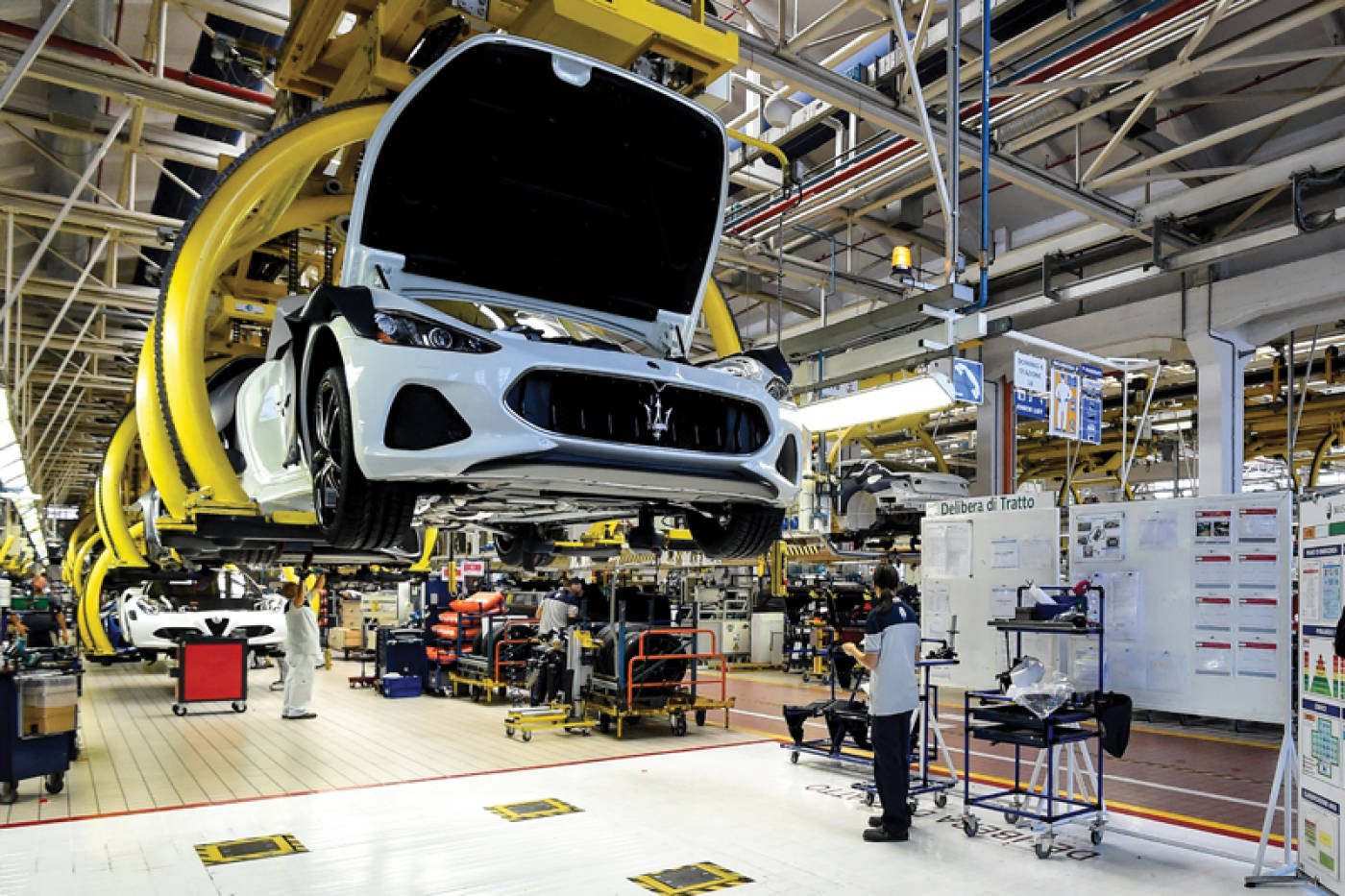 After 18 stations (6 on the ​‘trim’ line and 12 on the ​‘chassis’ line), the car is mechanically complete, but there are 12 more stations to follow on the final line. Glass goes into all the windows, interior components and upholstery. At the end of the final line, after station 30, before entering the testing area, the car’s ignition is turned on for the first time. Then, the engine is balanced; the suspension is tested using a vibrating bridge, then a test driver takes it on the road to find imperfections. When all the kinks are ironed out it’s off to the Finishing Department and an undercarriage clean up. After the car has passed the water test and completed a 50km road test, the car is then moved to another building for final inspections and further, independent testing. When all this is done it’s ready for shipment and covered with a white protective film in preparation for transportation.

“We test every engine,” Manicardi says. ​“First for an hour, then three minutes at maximum power.”

Finally, the anticipated key handover moment has arrived. For the next five-days, the Rosso Folgore coloured 3.0‑litre twin-turbo V6 Quattroporte S is mine. The 2017 version in a long line of Quattroporte models that have shuttled its passengers in splendour and speed since they were first launched in 1963. Just touching her steering wheel will increase your heartrate, I recall Manicardi’s words.

This car isn’t just about head-spinning good looks, it’s about image, coupled with a presidential air. The Quattroporte’s silhouette is striking in its good looks. Take a close look at the modified grille and you’ll find Angelina Jolie’s pout, the Italian verve of Sophia Lauren’s slanted almond eyes in the adaptive xenon headlights, the willowy curves of super model Gisele Bündchen – with modified, well-defined front and rear bumpers that just shouts J‑Lo. Yet, all the downward swoops, upward kinks and sensual aggressive road presence barely hint at the outrageous Ferrari engine under the bonnet that screams ​‘made for speed’.

I climb in, slide onto the leather seat and caress the steering-wheel. A shiver went up my spine. He wasn’t wrong, our Manicardi, I felt a little breathless. 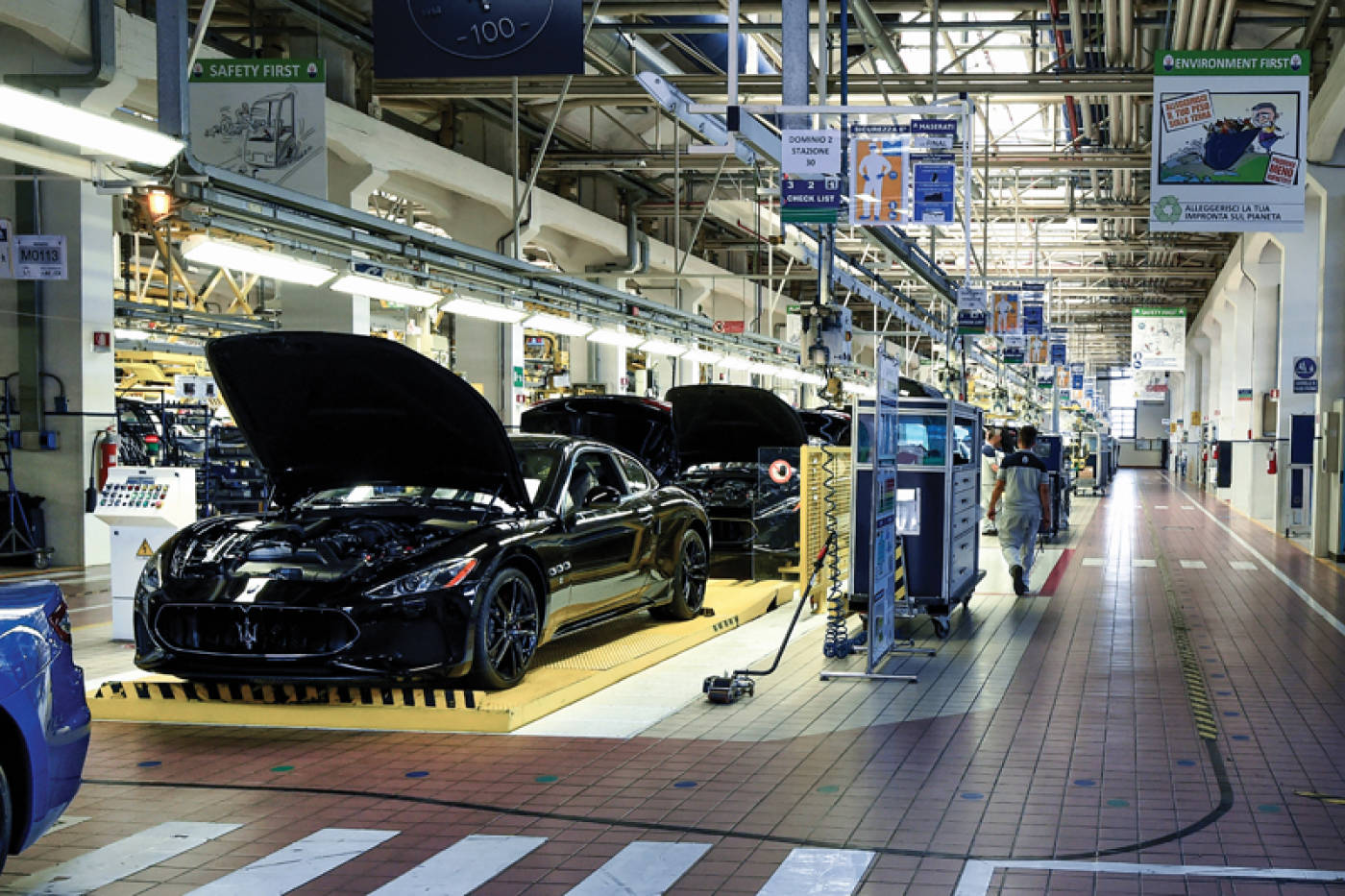 Effectively the interior has three layers of opulence – leather, wood and aluminium, and includes myriads of other luxury essential, like adaptive cruise control, lane-departure warning, forward-collision warning, emergency braking, an 8.4‑inch touch-screen infotainment system… (okay, so it’s a long list, but you get the picture). This may well be one of the most expensive versions of the Quattroporte, but it’s also the most desirable. It has style and elegance that’s simply not available in any other sedan in the £100,000 range.

Only the Italians could get away with calling a car ​‘four door’.
For a fast grand-touring sports car, swathed in a low-slung body, the performance is astounding, poetry in steel, with supercars acceleration. The steering is responsive, handles beautifully, and its eight-speed ZF transmission is perfect. The Quattroporte’s stability and grip in hard cornering is incredible. The strength of the fire-breathing Ferrari engine is obvious. On twisty roads, it owns the bends far more so than its nearest rivals (Audi A8, BMW 7 Series, Porsche Panamera, Jaguar XJ).

Then of course, the spine-chilling twin-turbo Ferrari soundtrack of a hundred thundering drums. Tap the ​‘sport’ button and a pleasurable sensation runs up your arm at every turn of the steering wheel. The car comes alive and changes a terrific car into something sensational. It activates the automatic gearbox to quicken its shifts and firms up the suspension and of course, it also opens the exhaust valves and delivers a deep rumbling voice promising much fun and recalibrates your mind. Maserati’s Quottroporte is a celebration of not what cars are going to be in the future, it’s a celebration of what they were in the past. This is pure rock ​‘n roll, dripping with cool.

If I had to nit-pick, and obviously I do, what I don’t like is the adaptive cruise control which, infuriatingly, brakes the car to a hard stop and only re-accelerate when whatever it was has moved completely away. Of course, this calls for driver intervention. My other minor annoyance is the hysterical parking sensors which don’t do much for my blood pressure. Perhaps Maserati has a button to remedy these issues.