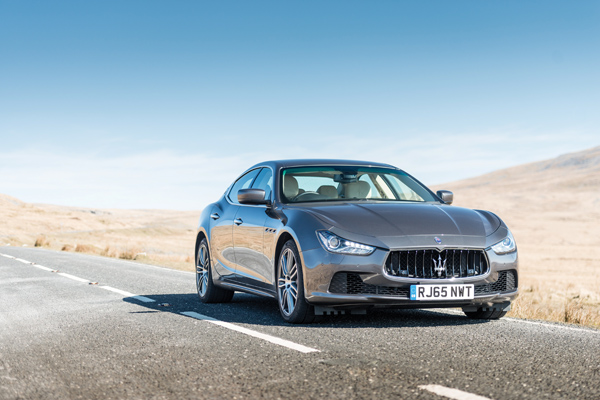 The Ghibli is to Maserati what the Countach is to Lamborghini which is why, with a hundred years of supercar breeding behind the name, they’ve decided to go diesel.

Maserati is rare and exotic, a small volume, big-ticket car. They’re appealing and aspirational but they’re also inaccessible and impractical; until now. 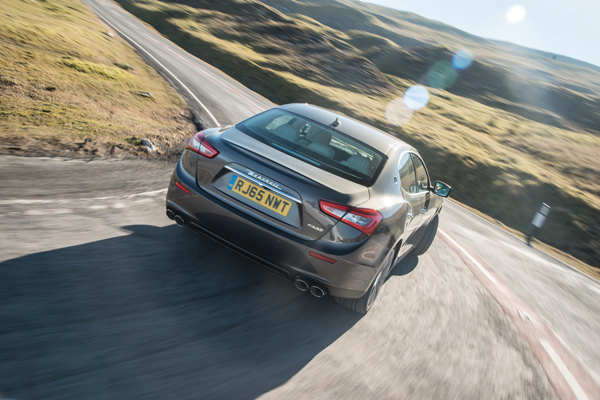 Maserati wants to finds its way into the corporate car park; they want to be familiar. They strive to sell 75,000 cars a year by the 2018 (up from worldwide sales of 32,500 in 2015). They need to attract new customers and with half the European car sales being diesels, the solution is clear. Which is why Maserati have bowed to trends in sporting diesels, with their new Ghibli leading the charge. 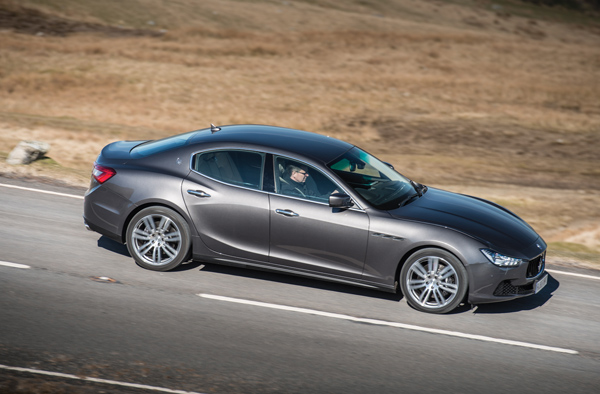 Okay, it may be losing some of the ​‘purebred race-car’ appeal, but the 3.0‑litre V6 turbo-diesel has been attracting attention like no Maserati in history. So don’t scoff just yet, as there’s a lot of people who long to own a piece of motoring heritage – especially one with a Trident crest on the nose and a price tag that dips below the £50k mark and promises near 50mpg.

With the Maserati badge, I expect something that pops and bangs its exhaust before machine-gun firing at everything else on the road – but the Ghibli’s nothing like that. Push the starter button and there’s no outrageous bark of revs, just a muted hum from under the bonnet. Slot the eight-speed ZF gearbox into ​‘D’ and cruise along at 60mph and you’re driving a high-end executive saloon. Press the ​‘Sport’ button and a whole different animal emerges. Engage the paddles, firm up the suspension and hear the Trident magic kick in as the clever valves in the chrome-plated twin exhaust emit the baritone roar akin to that of a V8 petrol engine.

It’s difficult to pick big holes in the Ghibli’s ride, handling or steering, which has a distinctly Italian feel to it. It’s solid enough to feel firm on the road, but also allows the driver to feel the changing road surface, which is more impressive than one that tries to disguise it. This is no lightweight sports car, but a proper executive sports saloon rivalling the BMW 5 Series and Mercedes E Class with a uniquely appealing proposition.

I love the styling of the Ghibli. It sits on an abbreviated steel and aluminium frame based on the Maserati flagship – the 4‑door £80k Quattroporte (but 50kg lighter); and also shares the Quattroporte’s suspension architecture.

While the Ghibli features all classic Maserati design traits, its exterior emphasizes its resolute character and is definitely more attractive than any of its German competition. The sharp-edged yet curvaceous body looks fast even when stationary, while its sheer bulk, combined with a front end (with its gloss black grille) that drops aggressively to the road is almost menacing. 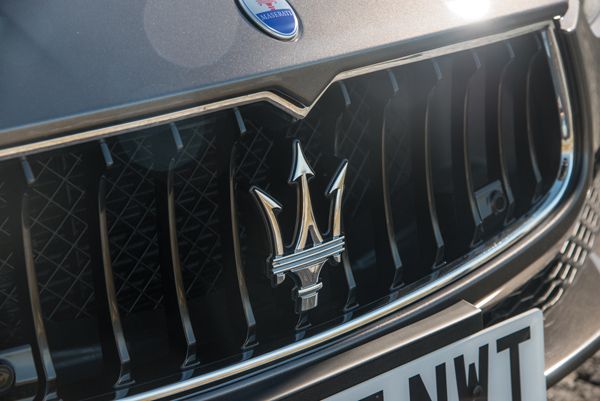 The outline of the body reflects a coupé-like thinking with noticeable feline hints around the Ghibli’s pronounced snout, with every angle drawing the eye to Maserati’s legendary Trident badge. The profile is assertively muscular, yet elegant and runs from the distinctive Maserati air vents behind the front wheels and finish in the mudguard and rear lights. It’s broad on the road and squats on 21-inch wheels, further enhancing the appeal.

The storyline continues in the cabin where, instead of clinical lines it’s uncluttered yet flamboyant in the way it swoops around the analogue dials which live alongside a large central (and logical) sat-nav screen, a dashboard mounted Maserati clock, terrific arm-chair style leather seats with embossed Trident head rests, frameless glass in the doors and a Harman Kardon sound system (plus 15 powerful Bowers & Wilkins speakers). There’s a pleasing depth and integrity to the Ghibli. But it’s also a Maserati, which means essentially it has its own distinct character. 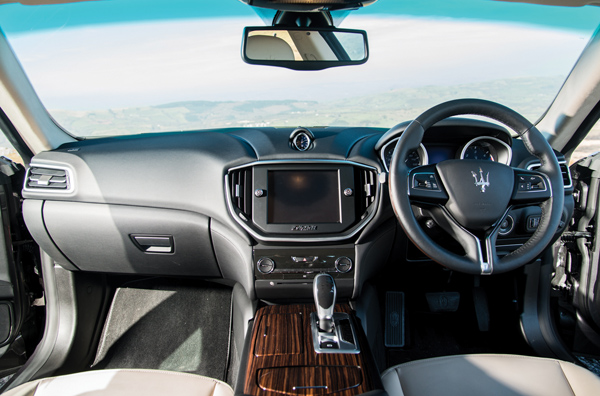 The Ghibli’s cabin arrangement is driver focused and feels sporty thanks to a chunky metal surround. The quality is excellent and there are some lovely touches, like the elongated metal paddles that feel expensive on your fingertips and operate with a satisfying click.

On the space side – two tall people can sit in the front and two little people in the back. In the boot there’s enough room for a set of golf clubs and a few shopping bags – but you can forgive Maserati for not making the biggest car in its class, because the bottom line is it’s a Maserati parked on your drive! So given the exclusivity of the Maserati badge I’m certain most of us would be prepared to cope with a little less space.

I never expected the Ghibli to be flawless and nor will many of its potential owners. From the way it looks to the sense of occasion it imparts, this car is all about raw appeal. It’s a low-slung slice of Italian exotica prowling amid a sea of conservative German saloons.

If you’ve owned a string of German saloons over the last ten years, you’re probably desperate for something different, something more exciting. That’s where the Ghibli scores brilliantly as it looks great, dynamically it’s close to any its competitors and remember, it has that Trident badge which will get people stopping to stare, while you get front-of-house parking at every hotel and restaurant.

Maserati – come on, say it. Maz-za-ra-tay – it even sounds delicious, it melts in your mouth and trickles richly down your throat. It’s a sublime piece of Italian engineering – noble, proud and strong. Quite simply it’s the opposite of ordinary, it’s remarkable.

Maserati is having something of a renaissance under Fiat ownership.
Maserati’s Ghibli 3.0‑litre V6 diesel is said to be re-engineered by VM Motori, just outside Modena, under the watchful eye of Ferrari engine man Paulo Martinelli. This is the same 3.0‑litre V6 used by the Jeep Grand Cherokee; it has the identical bore, stroke and 2,987cc capacity of the 3.0‑litre V6 Mercedes diesel – that’s the Mercedes owned by Daimler that also once owned Chrysler which still owns Jeep, both of which are now owned by Fiat, which also owns Maserati. 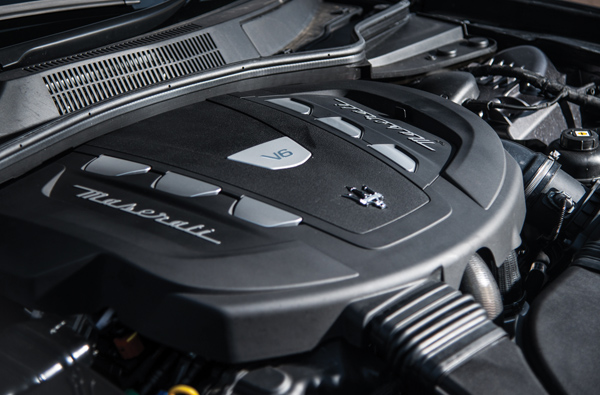