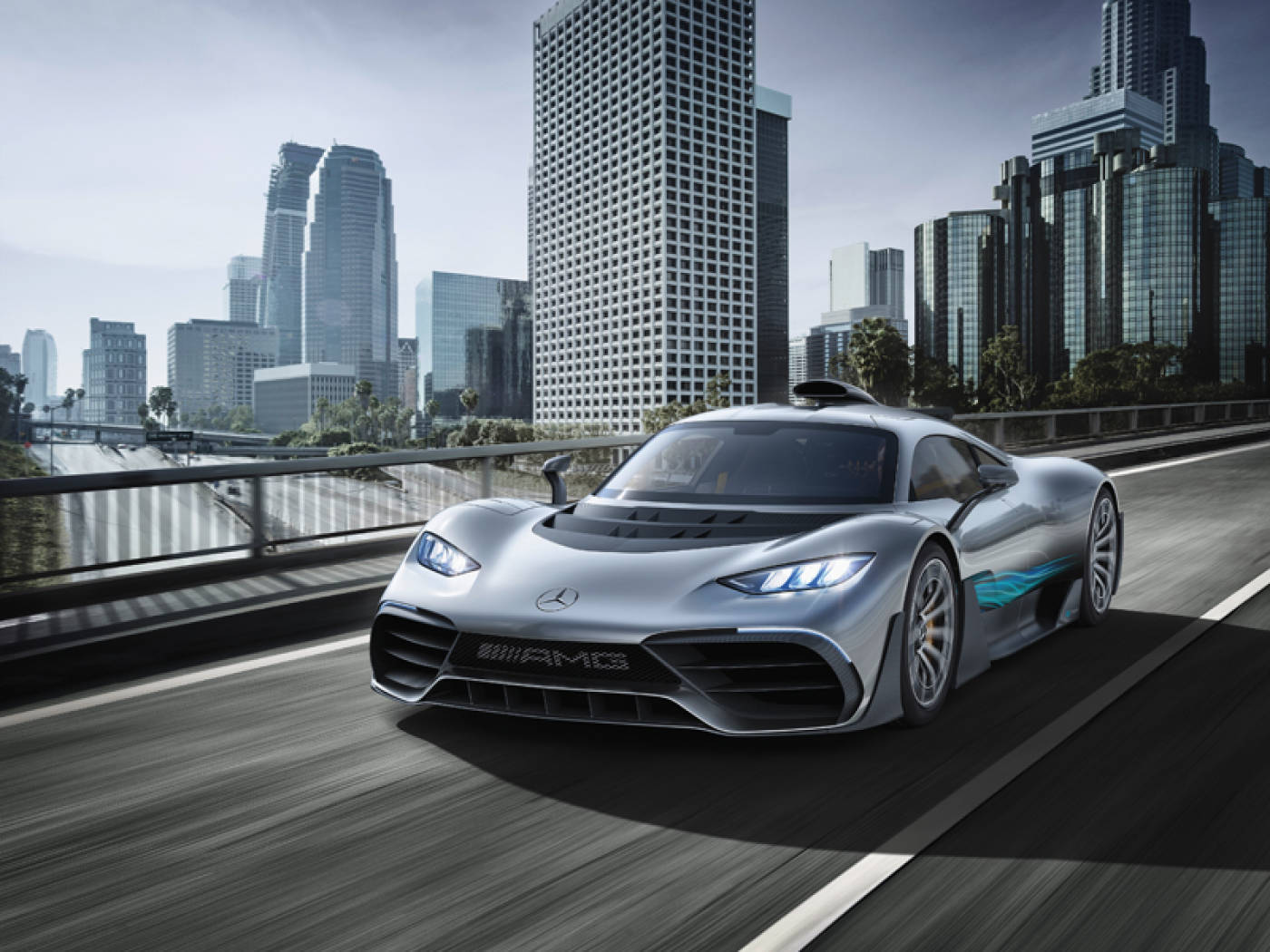 What do Formula One cars have in common with the cars you and I drive every day? Not a lot seemingly apart from an engine, four wheels and tyres. So why do the likes of Mercedes, Ferrari and Renault invest so many millions in F1 technology? To go faster, to win, to attract buyers to their brand. All three of those are perhaps credible. To develop new road cars? Scarcely credible.

Even the idea that F1 technology will one day trickle down into the cars we drive seems stretching it a little. And then at the Frankfurt Motor show in September Mercedes AMG only go and launch the Mercedes-AMG Project ONE. A car, it seems, that is in effect the world’s first road going F1 car. 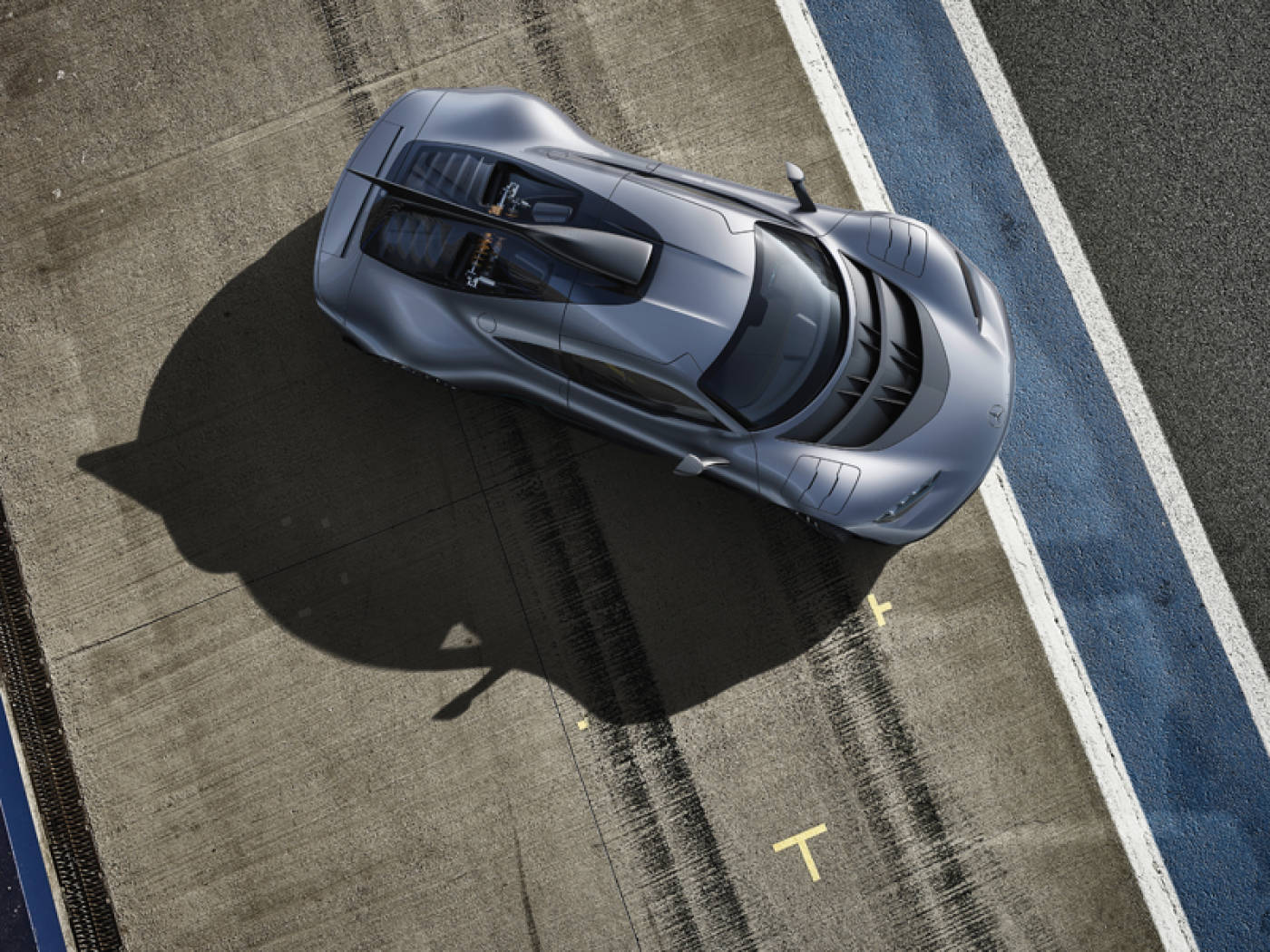 The high-performance two-seater hybrid hypercar is said to produce over 1,000 hp and reach top speeds beyond 350 km/h (217mph). The concept car unveiled at Frankfurt gives indications of what to expect from the upcoming production model. The high-performance plug-in hybrid drive system comes directly from Formula 1. It consists of a highly integrated unit comprising one hybrid, turbocharged combustion engine with a total of four electric motors. One has been integrated into the turbocharger, another has been installed directly on the combustion engine and the two remaining motors drive the front wheels. 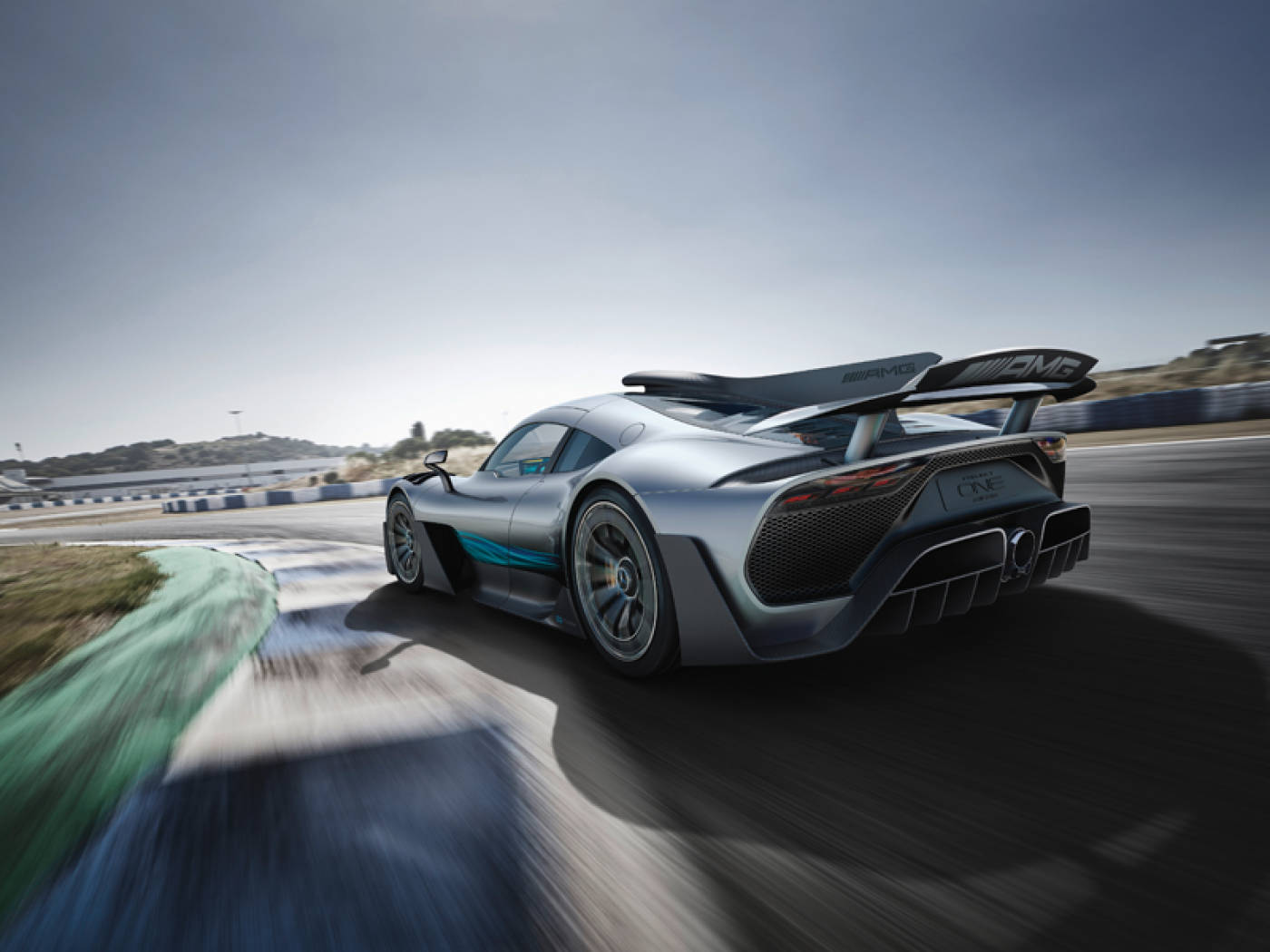 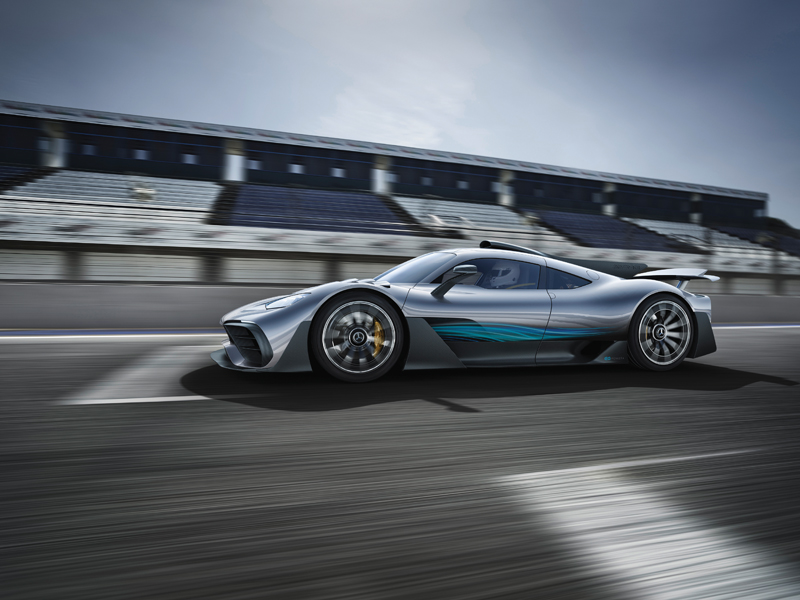 The 1.6‑litre V6 hybrid petrol engine with direct injection and electrically assisted single turbocharging comes directly from the Mercedes-AMG Petronas Formula 1 racing car. Uniquely for a road going vehicle, the engine revs to 11,000 rpm, but for longevity and the use of commercially available Super Plus petrol, it remains significantly below the F1 engine speed limit. The very high-revving engine is boosted by a high-tech turbocharger with virtually no turbo lag. Mercedes claims response time is shorter than that of a naturally aspirated V8 engine. 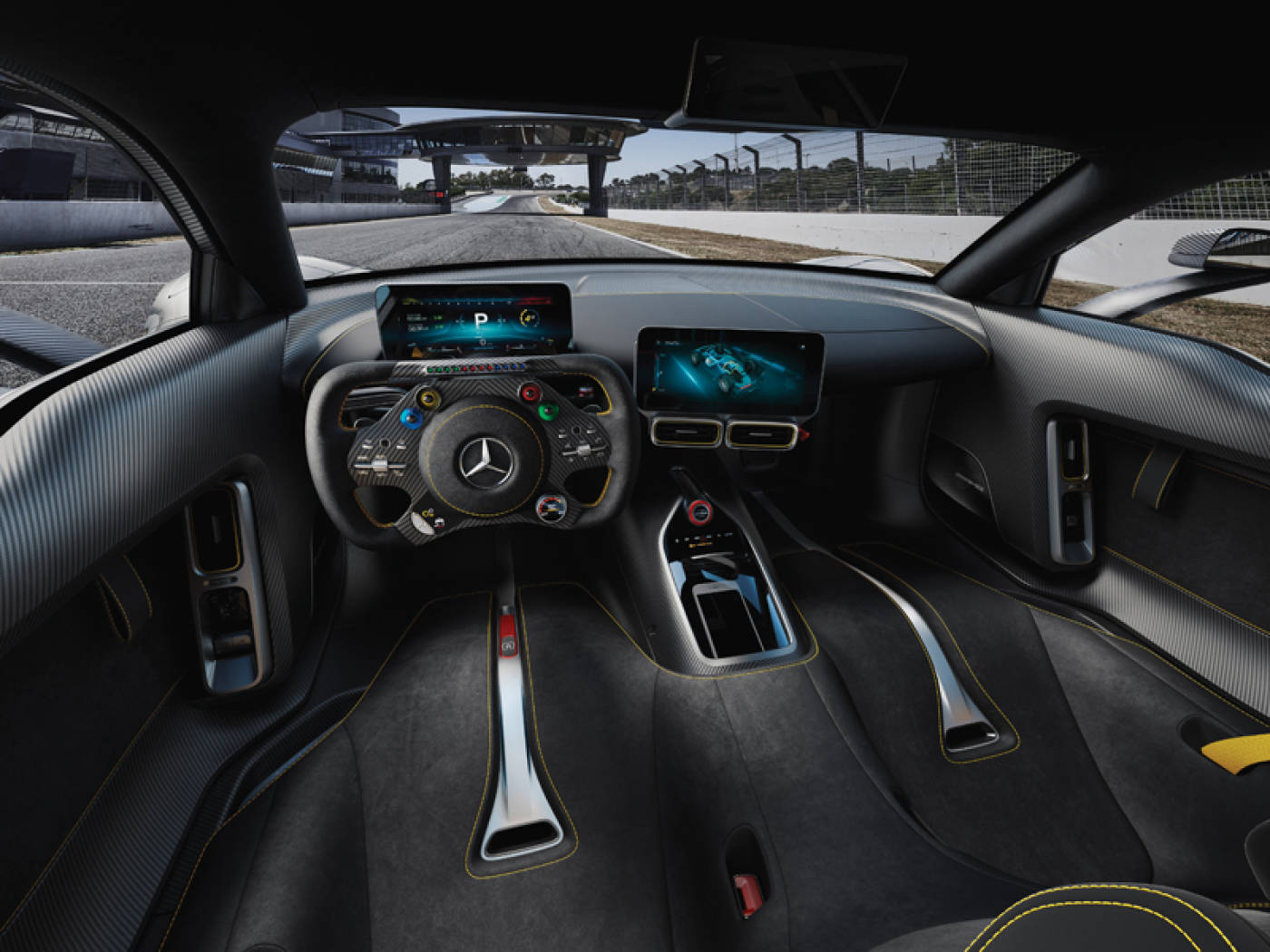 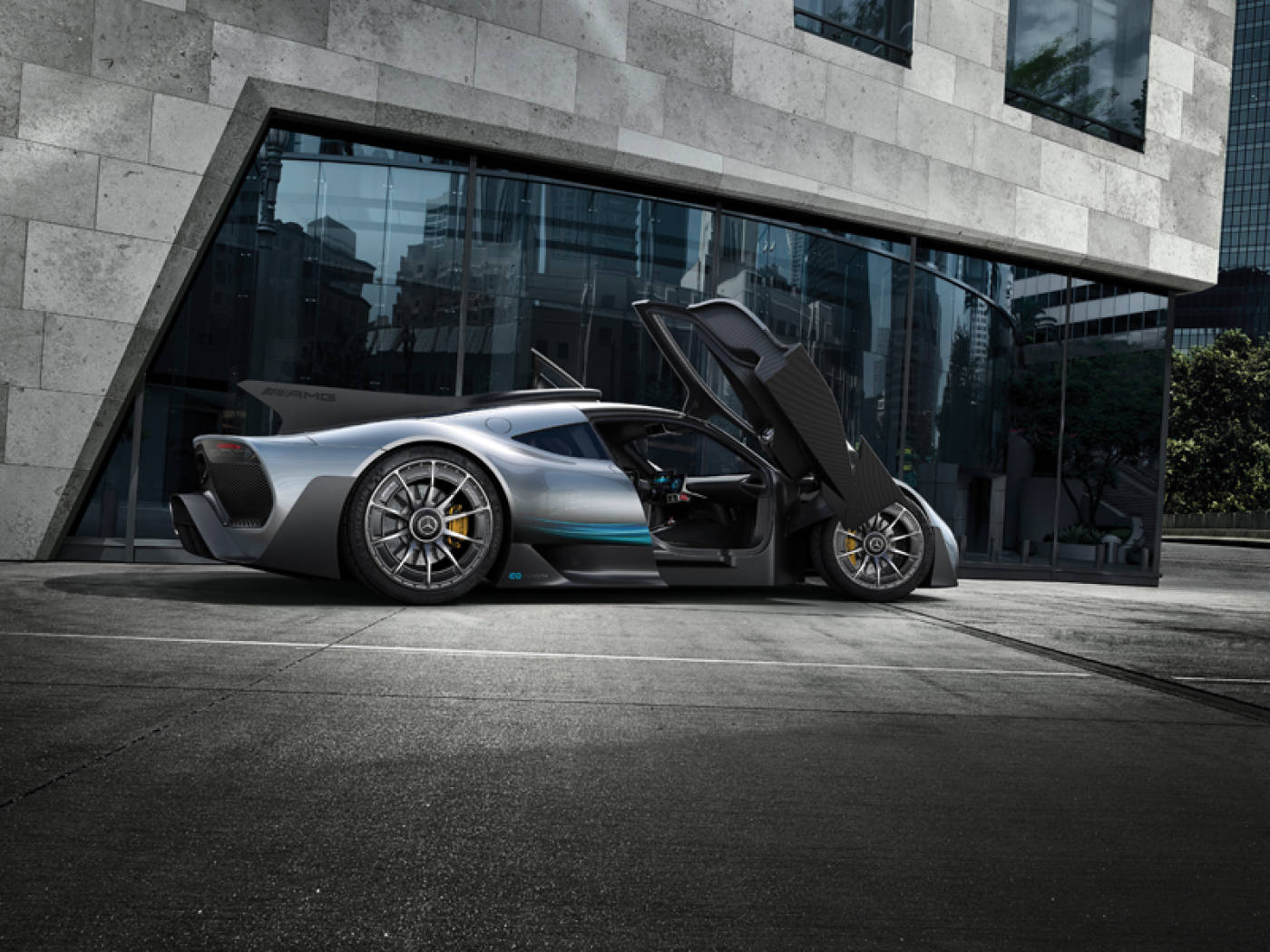 The driver can move off purely electrically, initially with just the electric motors on the front axle driving. Press the accelerator more firmly and the V6 engine also switches on. Acceleration with the Race Start function sees zero to 200 km/h (0 – 124mph) in under six seconds.

The front view features a large front apron, the inlets of which extend across the entire vehicle width. The hallmark AMG A‑wing below the centre section creates a silver-coloured highlight, and seamlessly transitions into the front wings. Flat LED headlamps blend seamlessly into the body contours. 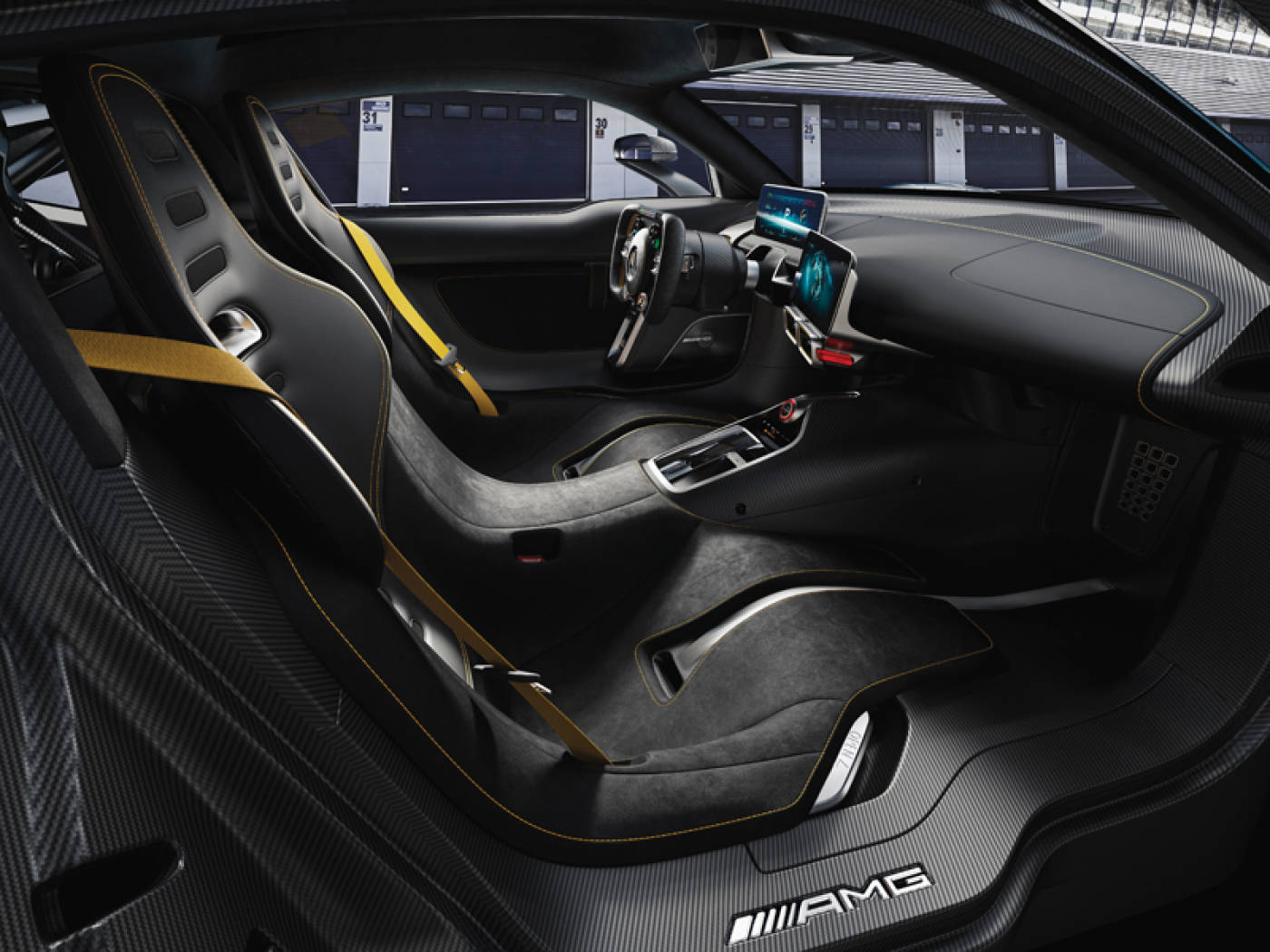 The roof line is dominated by an air intake derived from Formula 1, which transitions elegantly into the black, vertical shark fin. The vehicle flanks are tautly recessed, with black carbon-fibre surfaces redirecting the airflow round the body. The doors open both forwards and upwards. The fuel filler flap is at the rear right, the charge socket for the plug-in hybrid battery at the rear left.

The ergonomically contoured interior has room for two occupants. The bucket seats with adjustable backrests are integrated into the monocoque. The pedals and steering wheel are adjustable, allowing the driver to adopt the ideal driving position.

The steering wheel with flattened upper and lower sections and an integrated airbag offers motorsport functionality, as do the two integrated controllers which can be used to set adjustment functions, such as the driving modes and suspension setup, or the LED shift display in the upper steering wheel area. 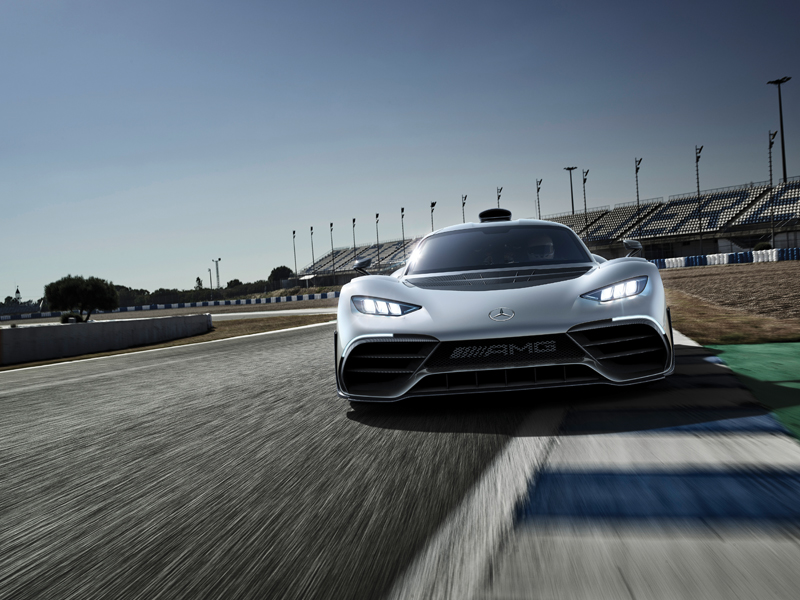 The door panels are in functional, high-grade carbon-fibre, and integrate smoothly into the sporty interior. Small items can be stowed in two compartments on the left and right behind the seats. An air conditioning system and power windows are standard equipment, as is the infotainment system.

The choice of colours and materials takes its inspiration from the Mercedes-AMG Petronas Formula 1 racing car. The sculptured racing seats are in slip-resistant black microfibre. The seat surfaces are interspersed with nappa leather in magma grey and inlays in a sporty textile mesh. There is also yellow contrasting topstitching.

Mercedes says the Project ONE will be an ultimate driving machine that brings current Formula 1 hybrid technology onto the road and combines top-class race track performance with full day-to-day usability. Its purpose is also to develop performance-oriented plug-in hybrid drive technology, advanced suspension layouts and extended onboard electronics that will later benefit series production AMG cars. So, the technology really will trickle down to cars available from your local dealer.

If you have got a spare €2.25 million (pus taxes) I suggest you hurry along and put your name down for a Project ONE. Apparently, they are only going to make 275, so there could be a bit of a rush. 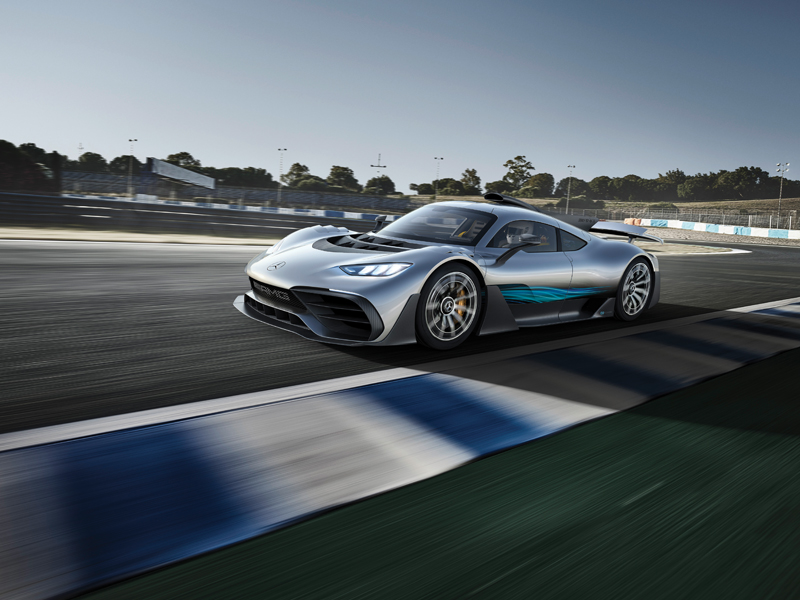